Accessibility links
Energy, Climate and the Midterm Elections : 13.7: Cosmos And Culture Debate on climate and its consequences is hard to find in the midterm campaigns. But it's one we should be having, because sooner or later, it won't leave our minds. 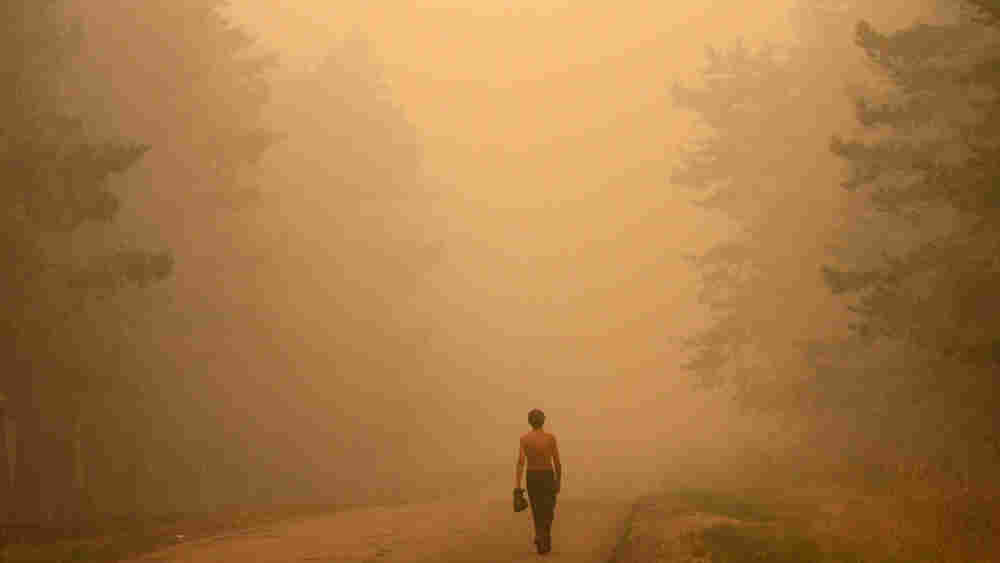 As wildfires rage on, a Russian man walks along the road 80 miles outside of Moscow. Andrey Smirnov/AFP/Getty Images hide caption

Cast your minds back -- way back.  It was a time of uncertainty, a time of fear and of consequence.  A time to ask what had we done and what we needed to do.

It was... earlier this summer.

Just a few months ago we were watching helplessly as millions of gallons of oil poured unchecked each day into the Gulf of Mexico.  It seemed impossible that this direct pipeline to the Earth's bowels was sitting there, beyond our technological reach, spewing raw petrochemical goop into waters that were a mere helicopter ride from U.S. shores.

The fragility of our dependence on oil and its real costs to human and natural systems never seemed so apparent.  With an election looming it seemed the perfect time to deal with the great unspoken assumption of modern culture: The energy will always be there.

That is not how its worked out. As the midterm elections draw closer you have to work pretty hard to find a candidate who talks about "energy policy" in any meaningful way.

But the drama in the Gulf was not all there was to this story.

Just a few months ago, we were in the middle of prolonged heat waves that withered many parts of the country for weeks on end.  Of course, heat waves come and go.  They are, in general, a natural part of climate variability.  But by summer's end NOAA published its analysis showing that 2010's northern summer was one of the hottest ever recorded. The period from January to August was also, by NASA GISS accounting, one of the hottest (if not the hottest) ever recorded.   The satellite images of Russian wildfires occurring in the midst of that nation's own heat-related summer disaster provided one potent image of the transition we're passing through.  The "signal" of climate's response to increased CO2 seemed to finally be felt in a visceral way.  So you might think all that record-breaking would be enough to make the word "climate" appear in some midterm election debate somewhere.

That is not how it's working out.

Once again, you would have to work pretty hard to find a candidate making climate and its consequences a major talking point of their campaign.

In principle, it's easy to see why energy, climate and a list of other resource depletion issues have disappeared from this season's election.  The economy is still mired in an anemic recovery (though no one is talking great depression anymore) and people are angry.  They are angry about jobs.  They are angry about Wall Street.  They are angry about Government.  This much is understood.   But none of it is an excuse for taking our eye off what may very well become the centerpiece of every election in a few decades.

If people are angry now, how will they feel when their city, if located in the southwest, faces dwindling supplies of freshwater?

If they are angry now, how will people feel, if located almost anywhere, when triple digits are no longer heatwaves, but just the new definitions of summer with power grids strained to keep up.

If it's jobs we demand, then why turn our backs on the post-carbon technologies that will likely determine which nation leads the world through the 21st century. If it's economic growth we hope for, then why not agree to all-out, massive efforts to growing that part of the economy that makes a sustainable future possible?

While the laws of politics have changed very little since the Roman Republic, more recently discovered laws of physics, hydrology and general ecosystem-economics weigh heavily on our current experiment in global culture building.  Somehow we must rise to the occasion and the new reality.  It's always easy to put off dealing with difficult problems especially if there appears to be a more pressing issue demanding triage now.

But what happens when we refuse to read the signs, even when they are dropped in our laps as they were this summer? If we can't recognize these markers for what they are and formulate the will to action, or at very least the will take up the discussion, then we are condemning ourselves to a tradition of failed vision and failed will.

Twenty five years from now may seem like some distant Universe to be safely ignored politically.  But our enduring greatness as a nation will likely reside in our capacity to see that future's reality growing in flows of energy, ocean and atmosphere that are happening now.