Accessibility links
Stronger And Smarter: Informal Science Learning In Rural American Libraries : 13.7: Cosmos And Culture It turns out that the U.S. curve is U-shaped, when it comes to science literacy. 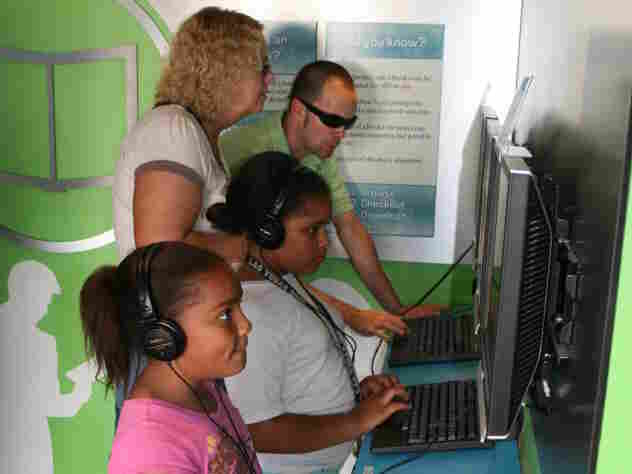 Myth: The American populace is science-ignorant, lagging well behind other “developed” nations in scientific literacy.

Fact: It turns out that the U.S. curve is U-shaped: Elementary-school children perform as well in science-understanding metrics as their peers elsewhere, even though formal science teaching at these grade levels is at best sporadic, whereas middle- and high-school students perform abysmally even though they take required science courses. But American adults demonstrate scientific knowledge on a par or above adults in other “developed” countries, even though only 30 percent of adult Americans have ever taken even one college-level science course.

So how to explain these data?

Much of my information derives from an excellent article in the American Scientist by John Falk and Lynn Dierking. They present studies showing that school is not where most Americans learn most of their science. Instead, knowledge is acquired via what is called informal science education or free-choice science learning. And while Falk and Dierking stress that current efforts to improve formal science education should be pursued with vigor, they lift up the imperative to also maximize opportunities for adults to pursue inherent levels of curiosity relating to science, technology, engineering, and math (STEM).

So how do Americans engage in free-choice science learning?

Studies indicate a variety of sources. Adults may be pursuing a hobby, like gardening or tropical fish or star gazing, and devour relevant information. They may take their children to science museums and zoos and pick up information and curiosity in the process. They may be afficionados of NOVA or Discovery Channel. They may consult the internet when they -- or family members -- incur a disease or when a disaster like the Gulf oil spill occurs, seeking to better understand what’s going on. They may bookmark 13.7 or Chet Raymo or Carl Zimmer or Kahn or Seed and avail themselves of scientists’ attempts to make their passions accessible. They may frequent a science café.

All this is good, but the fact remains that major segments of the U.S. populace do not meet the STEM-literate bar no matter where it is set. Many would self-describe as science-disinterested, or as science-phobic, believing that they lack the wherewithal to understand “that stuff,” or as science-averse, believing that science is a sinister force, as evinced by some of the comments to Marcelo’s blog below.

These observations take me to describing how I’ve spent my past few days. I went to Chicago to serve as a scientific advisor to a fascinating project, funded by the National Science Foundation and spearheaded by a group that includes our own Marcelo Gleiser, to develop free-choice STEM accessibility and interest in rural U.S. communities.

Persons in small towns and rural communities lack direct access to science museums or zoos or public lectures or science cafés, and home internet access, if available at all, it is via agonizingly slow dial-up connections. Happily, thanks to the largess of the Bill and Melinda Gates Foundation, more than 98 percent of U.S. librarians now have enhanced broadband access, meaning that the local public library has rapidly become a primary destination for those seeking on-line information as well as books and videos. Indeed, in rural areas, the local library may be the “only show in town” for adult community life. The sign outside the Gilpin County Public Library in Colorado, for example, reads: “FREE COFFEE. INTERNET. NOTARY. PHONE. SMILES. RESTROOMS & IDEAS.”

Many of these libraries sponsor public book clubs, but their focus is almost solely humanities-related. Moreover, the librarians that valiantly serve these libraries, often single-handedly, are rarely formally STEM-educated and, when interviewed, are forthright in acknowledging their sense that their ability to encourage STEM literacy is limited.

So the NSF project being developed is basically a hybrid of a book club and a science café. Here’s the concept.

How cool is that?

The Chicago meeting included high-end script-writers and videographers with PBS-style backgrounds, leaders in the library world (about which I was abysmally ignorant), and scientists. A central goal was to discuss the kind of content that would be good for each module and how it would take compelling video form.

The central theme of the series is called Pushing the Limits. From the proposal summary:  “Since the beginning of human time, we have imagined and achieved ways to push the boundaries of the physical world. We want to be stronger, smarter, and more aware, and we create stories to bring those dreams to life. But are there physical limits to what we can do? Are there unbreakable rules of the universe? How far can science and math go to help us push our limits?”

The module I helped develop is called Immortality, and the three units we came up with are provisionally called:

So, for any of you still reading, here’s a question: What good fiction, including but not limited to science fiction, might come to your mind that addresses this Immortality topic in an engaging fashion? Your suggestions might, in the near future, become the grists of inquiry for thousands of your fellow free-choice science learners!