Accessibility links
Japanese Teenagers Teach Us Something About Being In Two Places At Once : 13.7: Cosmos And Culture The reality of text messaging, Japanese teenagers and the meaning of space. And thoughts on why driving on the phone is dangerous. 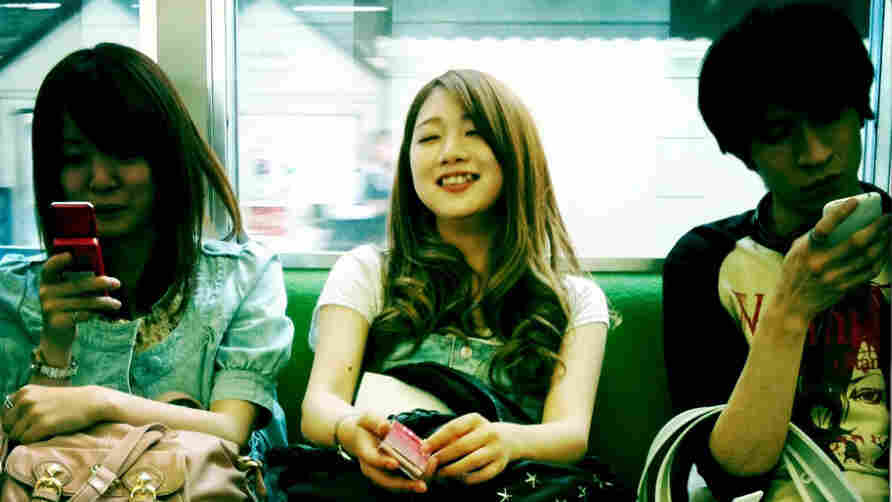 When teacher calls attendance, you answer “here!” In this way, you let her know you’re there. But notice, you don’t tell her that you’re there. You show it, or signal it. You might have raised your hand in response to her query. By raising your hand, or saying “here!,” you make your presence felt.

This use of language to signal presence is important. In particular, it sheds light on the transformations that are occurring as new technological practices such as cell phone use and social networking sites, etc, get embedded in our lives.

Consider a fascinating study of the text messaging behavior of Tokyo teenagers that was conducted as part of a much larger investigation of "digital youth" by Mimi Ito, the late Peter Lyman and their colleagues. The kids text back and forth all day. What are they writing? What is so pressing that it can’t wait till they see each other?

Anthropologists looking at the matter were surprised to discover that the kids rarely send informative or detailed messages. As a general rule, they are not telling each other anything. Rather, they are just letting each other know that they are “there,” that they are online, in reach. Texting for the kids is a way of “pinging” each other. They bounce pings back and forth and so signal their presence for each other.

Perhaps it would be better to say that the kids are not so much signaling their presence as they are literally making themselves present to each other by establishing and then continuously verifying the existence of a communication channel. And there is need for this as well, it turns out.

Tokyo is a huge city. Kids commute great distances on the way to and from school, sometimes traveling as much as an hour in each direction. In the context of such a spatially distributed social reality, there is a need to find new modalities of presence. And this is what cell phone technology, in the hands of the teenagers, is able to do.

It makes what is far, near, not by changing physical distances, but by, so to speak, demoting the importance of physical relationships in place of a whole new set of relationships. The children remain far from each other in the physical space in which the commute takes place; but they achieve a closeness, even an intimacy, in a different, virtual space.

Actually, I don’t like the term “virtual” in this context, for it suggests that virtual space is somehow secondary or unreal and that physical space is the only real and true one. When really both spaces are, as far as human experience is concerned, on a par. Pinging with a cell phone is a method for scanning one’s environment. You can scan your office with your eyes. You can scan your buddies after school by SMS. And just as you don’t need to pick up and examine everything that falls within the range of your scan, so you don’t to go into details with your friends using the SMS-channel.

What is a space anyway? I don’t mean what is space (that is, the thing physics studies). I mean, what is a space? Without getting technical, a space is a structure of relations that can be characterized in terms of near and far. We can speak of locations only relative to a space in this sense.

Now, we are animals, we are physical, and so we occupy positions in physical space. And there are good biological reasons why physical space may seem to have a certain priority for us. Where is the prey? Where is fruit, water or shelter? In a basic sense, these are questions about location in physical space. But it is clear on reflection that physical relations of near and far are not the only ones that matter to us. The prey may be just a few feet away and still be entirely out of reach because, say, I lack the speed, knowledge, skills or tools to capture it. In the space defined by my practical abilities to hunt down and capture the animal, the animal may be very remote indeed.

The acquisition of skills doesn’t only enable you to traverse distances in physical space; it provides the basis for different sorts of relations in new spaces. Take the case of writing. Writing enables one to communicate with people who are beyond the physical reach of your voice. A piece of writing can affect millions and can continue to do so long after the writer is dead. The kinds of relationships we can have to each other when we have writing are simply incommensurable with those that we might enjoy without writing. The spatial relationships that are brought into being by knowledge of writing are constrained by physics, of course — after all, writing is a physical medium — but they are in no way grounded on it.

I heard an interview with Whoopi Goldberg the other day on the radio and she was complaining about the problem of people talking too loudly when they use a cell phone. She remarked that it is as if people think their friends go deaf the minute they get on the cell together. Actually, that has nothing to do with why we loud-talk on cell phones. I can see two distinct explanations for cell phone loud-talking.

First, face-to-face conversation is a dynamic interaction between two people. Talking is a kind of turn-taking, and turn-taking is a rhythm that organizes how and when things unfold. When people talk, they modify their postures and tempos so that they correspond. (There is fascinating research on this sort of "coordination dynamics" by, among others, J.A. Scott Kelso and colleagues.) And moreover, they tend jointly to pay attention to what is going on around them. One upshot of this is that when you are talking with someone, you actually experience that they are listening. Talking, in this sense, is like dancing. You can tell whether someone is dancing with you or whether they have detached and lost interest.

It is often very difficult to establish this sort dynamic engagement or coupling to someone over a cell phone. The connection is often just not good enough for that. One has the experience of speaking, but one lacks the corresponding experience of being heard. You literally lack the feedback — the coordinated breathing, the modulations of tones of voice, etc — that signals the other’s focus on you. And so you shout. It’s like when you talk on a walkie-talkie; you shout to maximize the chance that what your message gets received over all the noise.

When a cell-phone connection is excellent, you and your remote partner to start up a dance together. But crucially, you dance to music that only you and your partner hear. That is, you succeed in establishing the kind of dynamic integration and entrainment that is typical of face-to-face conversation. And that has the effect of transporting you right out of your physical environment into one that you share with your conversation partner. And this in turn has the effect of guaranteeing that your tone of voice and volume will be inappropriate for your actual physical conditions.

This also explains, by the way, not only why driving while talking on the phone is dangerous, it also explains why it isn’t dangerous to drive while talking to someone in the passenger seat. In so far as you and your friend are mutually entrained in conversation, then you are also mutually responsive to your shared environment. Both you and the person you talk with are likely to modify the way they talk to changing environmental conditions. Your speech slows as you approach a delicate traffic situation and your interlocutor sees why your speech has slowed, and vice versa.

I would predict — I don’t have any actual data — that far from being dangerous, driving with a companion would tend to lower risk levels. For the companion in effect becomes a kind of extension of you as a driver. I would also predict that driving while talking actively with passengers who are entirely oblivious to what is going on around them in the traffic universe — small children for example — would be very dangerous. This is a worthwhile subject for study.