Accessibility links
Breast Feeding, Taking Turns And Primitive Conversation : 13.7: Cosmos And Culture What suckling and conversation have in common is that, like dancing, they are patterns of dynamic activity in which the behavior of each participant can never be just the result of his or her decision. 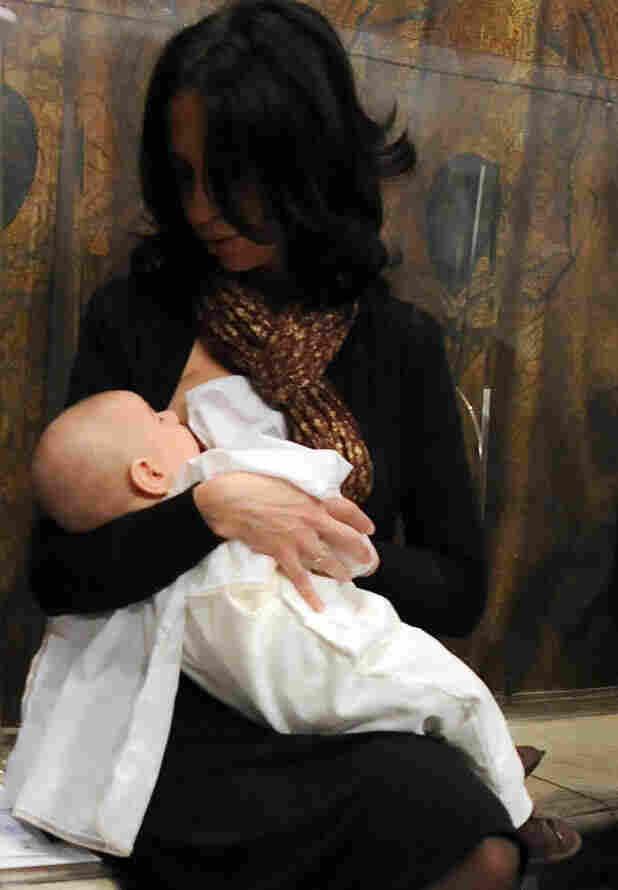 Mammals suckle their young at the breast. This is their characteristic feature.

Human babies, however, are difficult eaters. We lose interest, get distracted, or fall asleep. Not so other mammals, who normally feed at the breast until they are full.

Why are we different? Might it be that nourishment is not the only reason we suckle?

Psychologist Kenneth Kaye has learned that human care givers (“mothers” for short) respond to the baby’s interruption in sucking by gently rocking the child, so coaxing it back to the business at hand. According to Kaye and others, mothers everywhere do this spontaneously, even if they have received no special instruction. And baby responds by resuming its consumption. (Kaye's work is described in his 1982 book The Mental and Social Life of Babies; follow this link for a free download of the book in pdf format from the author's web site. Bruce Wexlar describes Kaye’s research in his lovely book Brain and Culture, and I review it briefly in Out of Our Heads).

So here’s a reason why we might suckle, above and beyond eating: We get to play with mama!

Baby eats, then pauses. Mama gently shakes. Baby resumes, then eventually stops. Mama takes notice and gives a little rustle. Baby answers the call and gets back to work. In the mean time, mother holds baby and mother and child attune themselves to each other and to the world around them.

How better to describe suckling, which, as Kaye notices, is developmentally our first experience of turn-taking, than as a primitive conversation. A conversation is more than two people taking turns talking. In conversation we are entrained by each other. We are caught up in a pattern of rythmic give and take. Interlocutors are listeners as well as talkers. They pay attention to each other and they find themselves unconsciously shaped by what they see and hear. We unthinkingly adjust our posture, volume, tempo to match or fit that of the person to whom we are talking. And interlocutors find themselves jointly attending to the shared space around them.

But isn’t conversation about exchanging information, expressing opinions, stating how things are? It has to do with words; it is a highly rational activity. What can it possibly have to do with suckling at the breast?

This is a highly unrealistic conception of conversation. Talking has much more to do with the grooming behavior of primates than it has to do with the sort of thing we like to pretend we are doing when we talk. And when was the last time somebody actually surprised you in a conversation, by saying something you didn’t already know or expect him to say?

Ritualized greetings — “hi, nice to see you. How are you? How is your family?” “Great, thanks. Good to see you too. Great great. How are you?” — are the essence of what we do when we talk. And of course we do exchange information, and argue, and make statements that can be assessed for truth and falsehood. But this is exceptional; and anyway, it takes place against the background of the cha-cha-cha of hand-slapping, posture adjusting, nursing-like mutual attunement that is what conversation is really all about.

What suckling and conversation have in common is that -- like dancing -- they are patterns of dynamic activity in which the behavior of each participant can never be just the result of his or her decision. The conversation, like a wave, has its own dynamics, and the talkers are like wave-riders, responding to each other and to the wave. We are governed by the dynamics of the wave. And so if we want to understand what we do when we suckle, or when we talk, or when we dance, we had better look to what people do together, what they enact in real space and time, rather, than, say, to their individual behavior (let alone to what is going on in their nervous system).

Conversation, like suckling, is a spontaneous choreography. Turn taking is one of its expressions. Touch, warmth, the release of oxytocin, these are its further, very advantageous side-effects.

So if suckling is primitive conversation, then dance is conversation in its most sophisticated form. I don’t mean art-dance; I mean the dance we do when we are with friends and there is music. In our shared living space, or in the night club, we joyfully reenact the most basic fact there is about us: that we are from the beginning — from the moment of our first meal with mother — part of something bigger than ourselves alone; we are part of something that requires of us that we lock in, hold on, pay attention to the other, to the music, and at the same time, let go.