Accessibility links
At The 'Trust:' Bringing Bonobos Into The Abstract Reality Of Humans : 13.7: Cosmos And Culture Biologist Ursula Goodenough visits the Great Ape Trust of Iowa. What she finds is a remarkable experiment that shows bonobos, a great ape, can understand human's abstract reality.

At The 'Trust:' Bringing Bonobos Into The Abstract Reality Of Humans

At The 'Trust:' Bringing Bonobos Into The Abstract Reality Of Humans 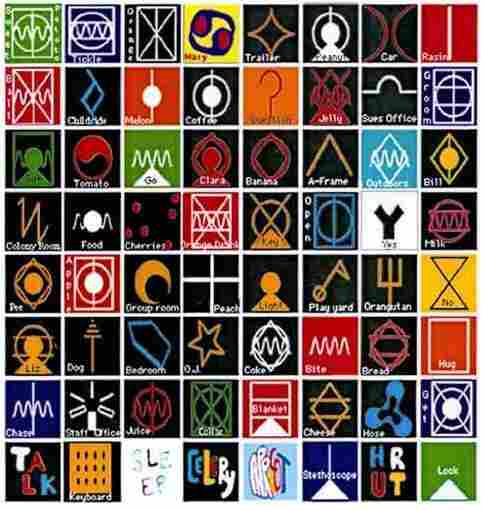 Continuing a thread started here and here, I spent a day last week at the Great Ape Trust of Iowa (called the Trust), where six adolescent/adult bonobos (age range 10-40) live together in a state-of-the-art facility with 6-month-old Teco and a team of human caretakers and scientists. Three -- Kanzi, Panbanisha, and Nyota -- have engaged in an English-language-acquisition research program with Sue Savage-Rumbaugh and colleagues, from a young age. The other three --Matata, Maisha, and Elikya -- have not participated in the research program and represent, in scientific parlance, the “control group.”

Participation entails learning to communicate with humans via a “lexigram board” displaying some 400 abstract symbols that denote words, both for objects – apple, M&Ms, backpack – and for concepts – secret, tomorrow. The three language-competent bonobos can, when requested to point to the symbol for a word, do so with ease. More importantly, they will spontaneously point to, for example, the ball symbol when they wish to play with one. They also readily put symbols together, such as ball + outside, and readily respond to novel spoken requests, like Put the keys in the refrigerator. Videos illustrating these activities are referenced in an earlier blog.

Here are a few reflections on my adventure, with more to follow next week.

First, let me address the matter of skepticism. I’m a great fan of skepticism, and it’s a required trait for a scientist: What might be wrong with my data or another lab’s data? How can possible errors be detected and corrected by additional experiments? Applying this mind-frame to the bonobo observations, it’s natural to ask: How do I know that the videos of Kanzi doing this or that aren’t rehearsed ahead of time? Or selected from hundreds of videos where he does no such thing? What about the case of the horse Clever Hans?

Skepticism is great, but an interesting dynamic attends studies of animal intelligence, and ape intelligence in particular. It’s like skeptics crawl out of the woodwork. Included in the comments to each blog I’ve posted on this topic here at 13.7 are queries along the lines of: Aren’t you anthropomorphizing? Projecting? Or, not beating around the bush: “Scientifically, Ursula's post is rubbish. It tells us only about her feelings, nothing about the apes. Science has truly become post-modern.”

Here’s where I come out on this axis. It’s important in animal-behavior research to apply the same rules used in all scientific inquiry, as is the case at the Trust. That said, when the pejorative "anthropomorphize" is generically applied to studies that document commonalities between the emotional/cognitive responses of non-human and human animals, I suspect it often comes from persons who are not comfortable regarding themselves as animals.

I didn’t travel to the Trust as inherently skeptical because, in my many years of interacting with and reading the publications of Sue and her collaborators, I’ve encountered and admired their rigorous and deeply informed approach to the project. But had I done so, my skepticism would have been more than addressed.

What becomes very obvious when spending time at the Trust are the differences between the language-competent and the control-group bonobos. I’m not just talking about cognitive performance, albeit this is also obvious: while I was there, Kanzi and Elikya were being evaluated on a new picture-recognition test that Kanzi was acing and Elikya was barely comprehending.

What’s more subtly obvious is a difference in level of attention to the human dimension. Elikya half-heartedly engaged in the new test for a while in exchange for food rewards, but she lost interest in finishing even one round of the exercise and was frequently distracted. By contrast, Kanzi literally burst into the room when the door was opened, knocked off a round of 100 questions with lightning speed, and then made it clear that he wanted to do another, more challenging, round, which he again dispatched. Watching him was like watching a human kid with a new video game: intent, absorbed, focused. At the end, when Sue gave him hugs of praise, he literally beamed with pleasure -- it’s right there on my iPhone video.

There’s a symbol on the lexigram for folks like me -- we’re called visitors, and we come infrequently. The three language-competent apes were unmistakably interested in interacting, coming close to the glass that separated us and signaling to me with gestures and deafening hoots, whereas the others, albeit in the same enclosure, were addressing their hoots solely to other bonobos, and apparently could have cared less that I was there.

At one point I went into a room and sat about two feet away from Panbanisha and one of her long-time caretakers, Liz. The glass was replaced with open chicken-wire-style fencing so we were fully face-to-face, gazing deeply into each other’s eyes. And we proceeded to have what I can only describe as a long three-way chat. Panbanisha pointed repeatedly to the symbol for tea on her lexigram and seemed satisfied only when an assistant brought me in some tea. For a while I spoke mostly to her, during which she was remarkably attentive. But then Liz and I got into a discussion about something. Panbanisha countenanced this for a while, and then she pointed to the symbol quiet and sulkily pulled her blanket up over her head. I apologized, she re-emerged, and we resumed our mutual gaze-intense interaction.

Probably all animals communicate -- even bacteria signal to one another to regulate population density via a system called quorum sensing -- and all six of the Trust bonobos engage non-stop in bonobo-style communication using hoots and body language and facial expressions.

What I came to realize, during my visit, is that human-style language entails more than communication. It entails the capacity to construct an independent reality, via symbols that reference the real world. A reality that has a life of its own. In my conversation with Panbanisha, it wasn’t like she was understanding everything I said -- of course not. It was akin to reading a storybook to a two-year-old human child, where the words allow us to share an alternate frame of reference even though only some of the words are recognized by the child as having concrete definitions.

The Pan/Homo culture at the Trust, therefore, lets us know that bonobo minds can be pulled into the abstract reality of human minds when they are given some tools, like lexigrams, to facilitate that transition.

Importantly, the humans participating in this culture are not at all simply engaged in “training” the bonobos to do human-style things. They are fully immersed as well in what it’s like to be a bonobo. The bonobos are subjects, not objects, and everyone in the facility -- language-competent and “control” -- are long-time friends and collaborators in this most remarkable experiment.

Let me close with a hats-off to Ted Townsend, who has provided large sums of his personal resources to build the Trust facility and support its high-cost maintenance. As he writes on his webpage:

The information emerging from this work has the potential to revolutionize early-childhood education, reawaken humanity’s respect for the other life forms with whom we share this planet, and save from extinction our closest living relatives.