Accessibility links
Can Machines Fall In Love? : 13.7: Cosmos And Culture Will machines ever be able to love? If so, what will they teach us about being human? 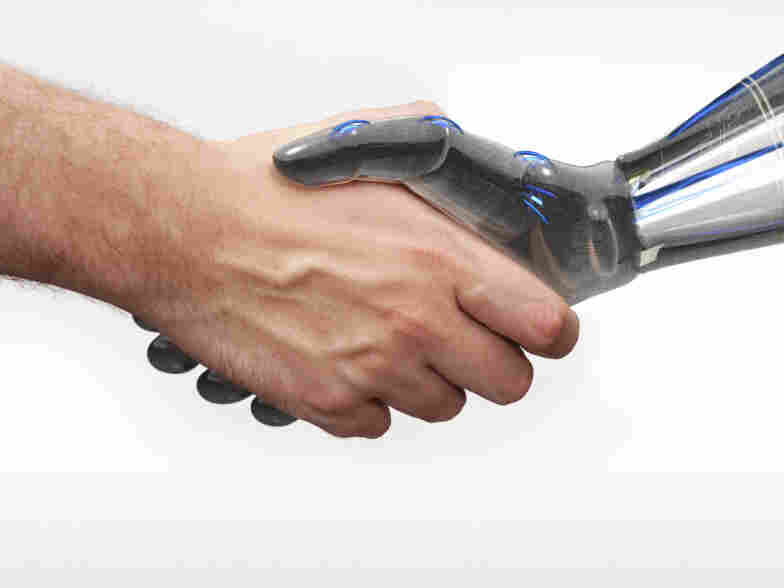 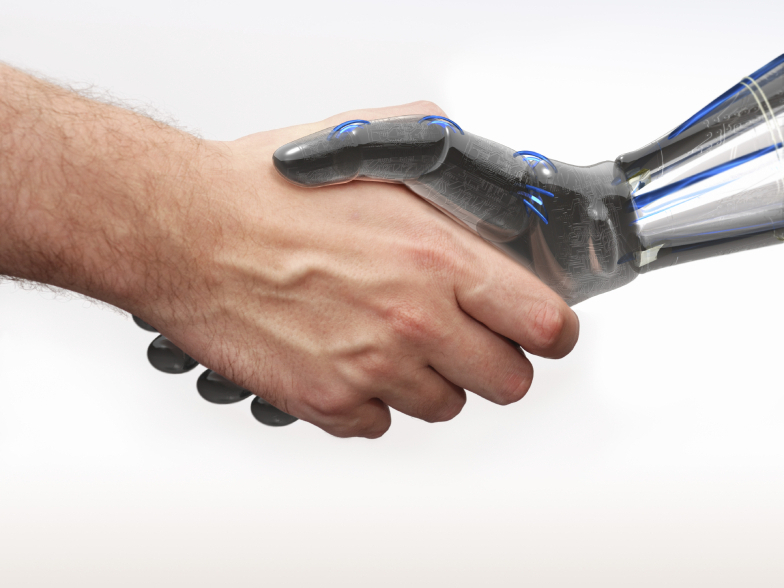 This past weekend, I re-watched the classic scifi movie Blade Runner, from 1982. The movie, based on the novel by Philip K. Dick Do Androids Dream of Electric Sheep?, was directed by Ridley Scott and stars a young Harrison Ford. For those of you who hadn't seen it, the story is set in a futuristic Los Angeles, AD 2019, just a few years down the road from us. Many regard it as a cult movie, a "neo-noir" or cyberpunk classic, in spite of its poor box office performance in the U.S. Some critics consider it one of the best movies ever made. Be it as it may, the movie does touch upon some very fundamental issues concerning the meaning of being human, which are well worth taking a closer look.

From our 2011 perspective, the first thing we notice is how off the movie is in terms of predictions. Cars fly and L.A. is unrecognizable: gloomy and dark, eternally soaked by monsoon-like rain, overcrowded, looking more like Shanghai at rush hour than the dry, sun-soaked home of Hollywood and palm trees. Everyone smokes. The sets invoke a vision of futuristic hell: you wonder why would anyone want to be alive there. And yet, the main theme of the movie is precisely life, the desire to be alive.

Genetic engineering plus artificial intelligence had reached an amazing level of sophistication, very distant from where we are today. Several corporations across the planet produce human-looking robots called Replicants, who are beautiful, smart and strong. Chief among them is Tyrell Corp., founded by genius scientist Eldon Tyrell, whose slogan is "Genetic Replicants: More Human than Human." However, the androids had been banned from Earth and perform slave-like labor in "off-world" colonies. The story revolves around Ford, who is a "blade runner," a destroyer of outlaw replicants, and a gang of four extremely dangerous replicants who manage to hide amidst L.A.'s chaotic mess.

The replicants are back to search for Eldon Tyrrell, their creator, who had engineered them with only a four-year lifespan. The androids want to live more, and will do whatever it takes to achieve that.

Machines touched with life want more of it, a first important theme.

Meanwhile, Mr. Tyrell has a new project underway: a gorgeous replicant named Rachael, who isn't sure if she is a machine or a human. Tyrell implanted past memories of his niece into the creature, who proudly shows a picture taken when she was six years old with her "mother."

Once you have a past you are no longer a robot (or don't feel like one), a second important theme.

Ford applies the Voigt-Kampff test — designed to help blade runners distinguish between replicants and humans — to Rachael, with somewhat ambiguous results. In contrast, normal replicants are unmasked quite quickly. (The fictional test measures bodily functions such as respiration, heart rate, blush response, and eye movement under emotionally provocative questions.) Rachael rebukes Ford: "have you ever taken the test?"

Could a verbal test distinguish between a highly evolved intelligent robot and a human? In real life, there is the Turing Test, which Alan Turing invented to answer whether machines can think. (He believed that in principle they could.) Some existing machines are capable of fooling human judges. And they are far from being intelligent machines. We can thus imagine that more sophisticated computers will easily fool us into considering them humans, at least behind screens. I wonder how soon they will be used for trouble-shooting phone calls. The only reason we can get frustrated "talking to a machine" is that they are still very limited.

What makes the machines in Blade Runner even more convincing is their human form. Contrary to clunky computers or traditional robots, they can mingle amongst us unnoticed. The lines between what is human and what is machine are so blurred that Ford falls in love with Rachael, and teaches her to love him back. Or at least to fool him into believing she loves him back. What level of cognitive sophistication is needed to feel love?

I guess we don't have a test to apply to humans to make sure someone loves you. In fact, I'm not sure such a test would be desirable anyway. As Brazilian poet Vinicius de Moraes wrote, "love is eternal while it lasts." The movie concludes with Ford and Rachael escaping "north," to spend together the few years she has left; for she was also programmed with a limited lifespan. Apparently, that was the last stumbling block to creating a real human-like creature: ensuring their longevity.

Could we contemplate a time where such machines will exist? Could we invent human-like creatures, that look, feel, and think just like us? If we do, what's to separate us from them?

Going back in time, in E. T. A. Hoffmann's classic short story The Sandman (1816), the protagonist falls in love with Olimpia, a human-like automaton. Although many saw her for what she was, narcissistic Nathanael didn't, and ended up losing his mind (and life). Interestingly, a year after Hoffmann published his tale in Germany, Mary Shelley was putting the final touches into Frankenstein. Both reveal our age-old fascination with being god-like creators, of cheating the boundaries between life and death.

Even if the notion of falling in love with a machine seems abhorrent to most people, the fact is that many already seek the companionship of automata. (And I'm not being ironic here…well, maybe a bit.) In Japan, robots are being developed to keep company to lonely elderly. Children love playing with toy robots. And isn't the Internet a trustworthy friend to so many, always there when no one else is?

If people in need are willing to compromise for less, while robots become more humanlike, there will be a joining of humans and machines. At what point then will machines stop being called machines?