Accessibility links
Leaky Replacement: Human, Neanderthal And Denisovan Blends : 13.7: Cosmos And Culture Understandings of human origins have undergone many seismic shifts since the accounts in Genesis and other sacred texts, but several findings this year might well be described as > 7 on the Richter scale.

Understandings of human origins have undergone many seismic shifts since the accounts in Genesis and other sacred texts, but several findings this year might well be described as > 7 on the Richter scale. 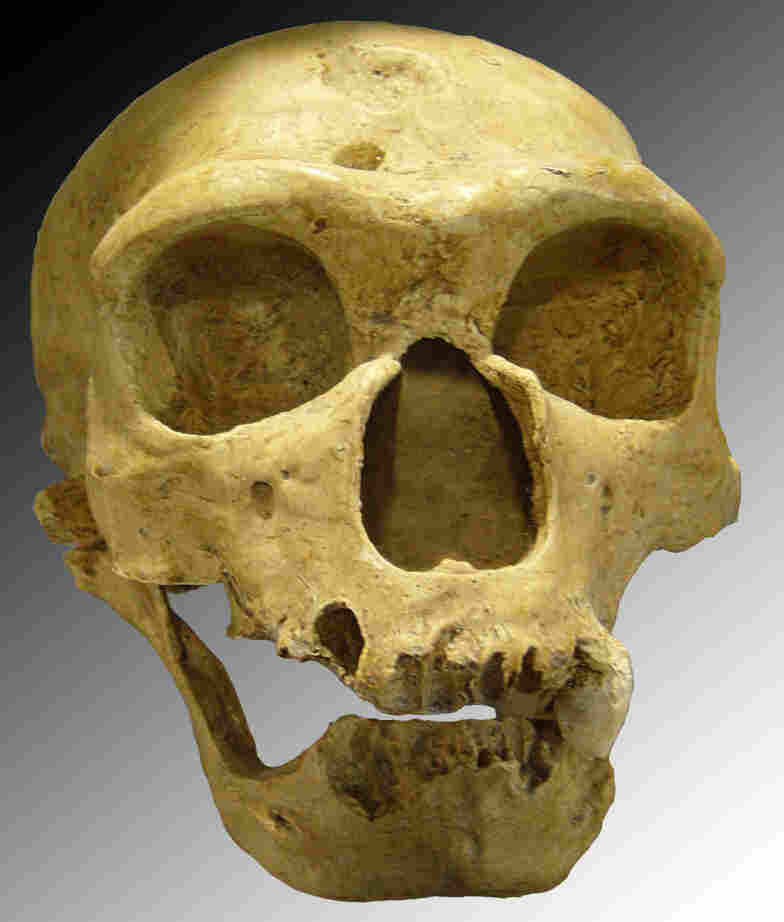 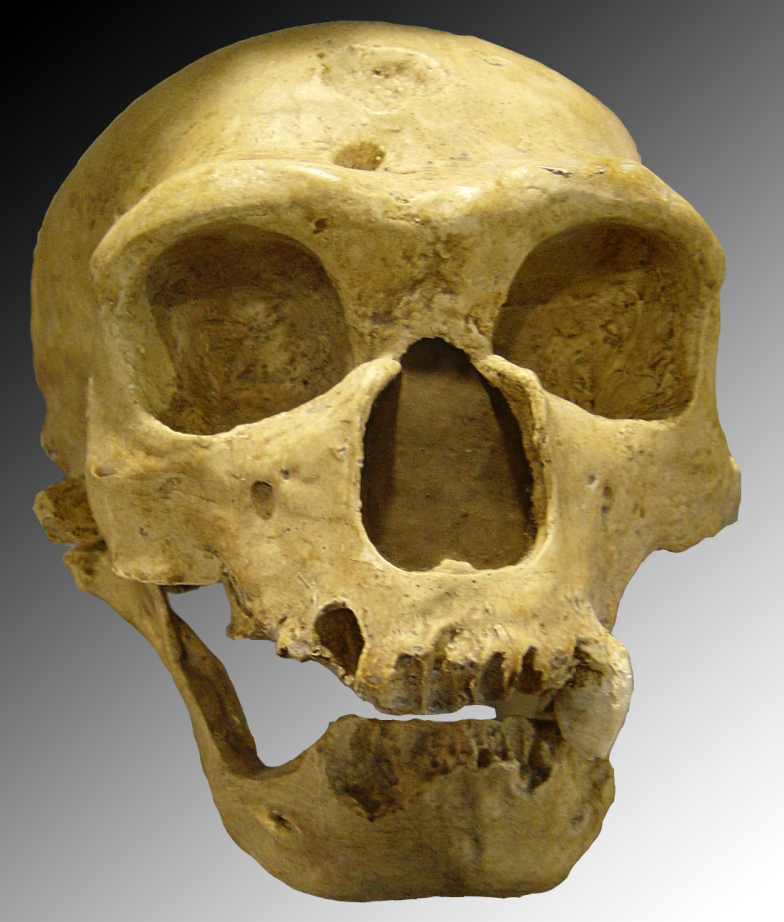 A Neanderthal skull discovered in 1908 at La Chapelle-aux-Saints, France.

Last March that idea was supplanted by what Svante Pääbo calls "leaky replacement." Genomes of fossil Neanderthal tissues were sequenced in Pääbo's lab, and it was established that roughly 2.5 percent of the genome of non-African humans derives from Neanderthals. That is, when the migrant humans encountered Neanderthals, there was interbreeding. The low 2.5 percentage may indicate that interbreeding was uncommon and hence only a small number of hybrids contributed to the more numerous H. sapiens gene pool. Or it may indicate that interbreeding was common but only a minority of the hybrids survived to contribute to the gene pool. Either way, the replacement was leaky.

All humans are African, and all humans except Africans are also a tad Neanderthal.

Last month, the story got even more interesting. A fossilized finger bone, dating to 30,000-50,000 years ago, was found in a cave in Southern Siberia called Denisova, and when the Pääbo lab determined its genomic sequence, it was neither human nor Neanderthal, albeit far closer to Neanderthal. Hence our concept of the hominids wandering about in Eurasia when humans arrived was upgraded: not only were there Neanderthals; there were also Denisovans.

Framing these findings in the context of the common ancestry concept, we can state that the most recent common ancestor to humans, Neanderthals and Denisovans was a hominid species we can call X that lived in Africa at least 1.8 million years ago.

Some X's stayed in Africa and gave rise to the H. sapiens lineage, while some gave rise to a lineage called Homo erectus that migrated into Eurasia perhaps a million years ago. At some point before H. erectus went extinct (~500,000 years ago), a divergence took place that gave rise to two Eurasian lineages, the Neanderthals and the Denisovans. The Neanderthal and Denisovan populations proceeded to breed in isolation for a sufficiently long time to establish distinctive genomes. But before going extinct, Neanderthal was able to transfer some of its genetic information into the immigrant human gene pool.

In New Guinea, replacement has been leaky indeed.

So what does all this tell us about Darwin's core question, the Origin of Species?

Clearly New Guinean persons are interfertile with Africans and Eurasians and share all salient skeletal features, so we humans are all a single species — H. sapiens — by whatever species definition one chooses. But if we use reproductive isolation — Mayr's biological species concept — as our criterion for defining a species, then what do we do with Neanderthals and Denisovans?

Neanderthal and human skeletons are highly distinctive. A tooth found in the same cave as the finger, and believed to be Denisovan, is unlike both human teeth and Neanderthal teeth. You can bet that paleontologists are scouring Southern Siberia seeking something more than a finger and tooth to tell us what Denisovans looked like, where "distinctive" is again the expected answer.

"I think discussion of what is a species … is a sterile academic endeavor. ... Why take a stand on it when it will only lead to discussions and no one will have the final word?"