Accessibility links
Theory of Everything... Still Searching? : 13.7: Cosmos And Culture Can we ever find a "Theory of Everything?" This past Monday, six physicists debated the search for the TOE at the American Museum of Natural Science in New York, including a member of 13.7.

Theory of Everything... Still Searching?

Theory of Everything... Still Searching? 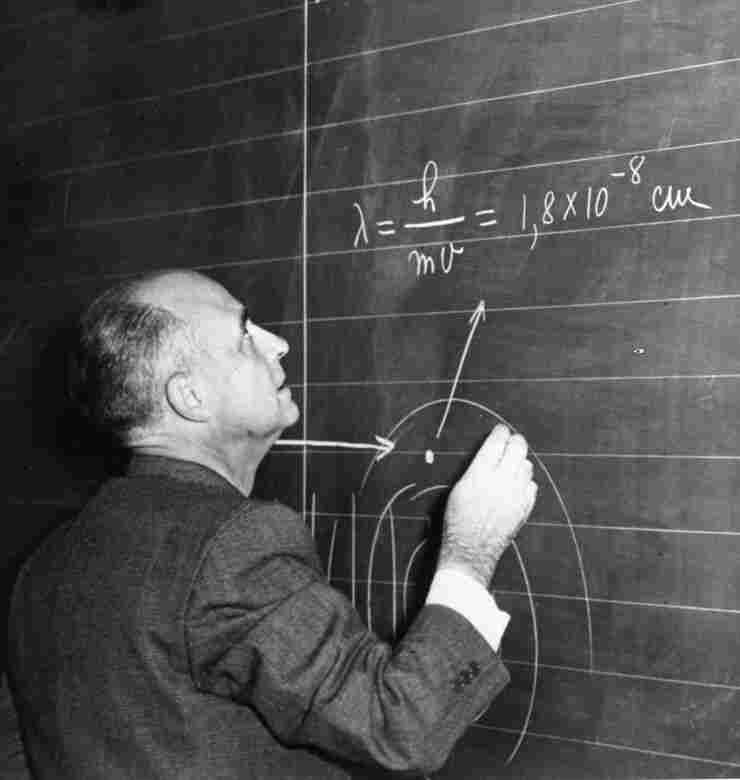 At every age, we seem to have the notion that now we will know it all. In this 1949 picture, Atomic scientist and Nobel prize winner Professor Enrico Fermi (1901 - 1954), a specialist in the optical characteristics of neutrons, writes on a board during a lecture to scientists of the Domegani Institute in Milan. Keystone/Getty Images hide caption 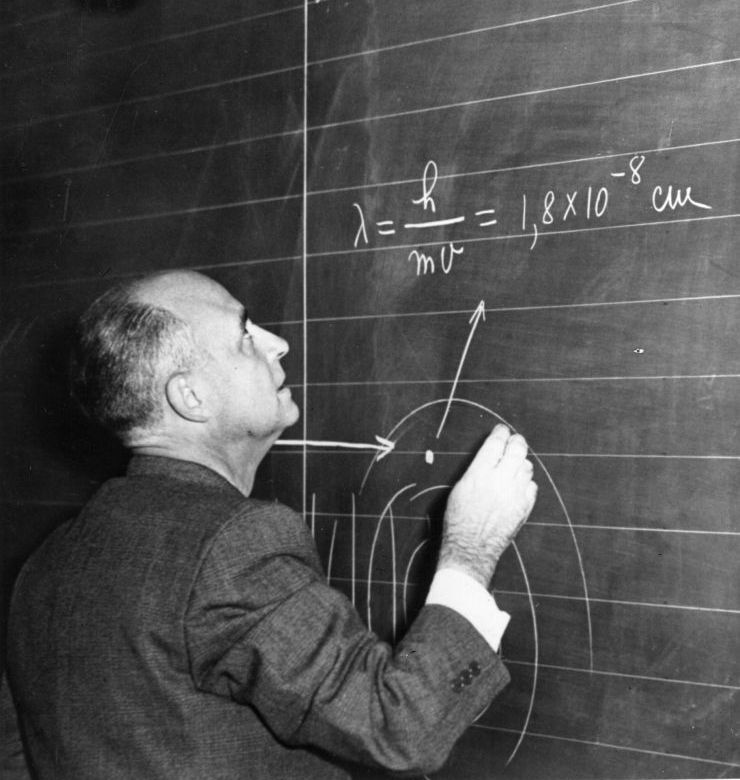 At every age, we seem to have the notion that now we will know it all. In this 1949 picture, Atomic scientist and Nobel prize winner Professor Enrico Fermi (1901 - 1954), a specialist in the optical characteristics of neutrons, writes on a board during a lecture to scientists of the Domegani Institute in Milan.

Monday night, I had the privilege to participate in the 2011 Isaac Asimov Memorial Debate, hosted by the American Museum of Natural History in New York City. The convener and master of ceremonies was Neil deGrasse Tyson, the director of the superb Hayden Planetarium, and the wonderful host of the PBS NOVA TV show scienceNow.

Tyson's task, which he fulfilled admirably well, was not trivial: to keep six physicists with different ideas and opinions in check, making sure we didn't veer into technically arcane topics, losing the audience. We could talk about quantum vacuum fluctuations, superstrings, the multiverse, and dark matter, but had to explain ourselves in English.

About 1,300 people came to listen as we discussed the night's topic: The Theory of Everything... Still Searching? The debate should be on video soon.

It was a night to remember.

Ten years ago, the inaugural Asimov Debate was also on the Theory of Everything, the theory so many believe is the ultimate goal of physics and, even more dramatically, the loftiest goal of science: to obtain a complete and final description of how the elementary particles of matter interact with each other and, in the bargain, show that all the forces that they exert on each other are, in fact, manifestations of a single, unified force. This coveted TOE, as it is known, would be the culmination of the reductionist approach started with the Atomists of Ancient Greece some twenty-five centuries ago. They were the first to propose that matter was made of indivisible bits. (It's important to clarify that, contrary to popular perception, TOEs are not able to say anything about "everything": they don't predict the weather, or what you will eat tomorrow for breakfast. They are restricted to the world of particles and their interactions.)

A cynic could say that if we've been searching for twenty-five centuries and haven't got it yet, perhaps it's time to let go.

Of course, the search changes as our knowledge of the composition and properties of matter changes. In fact, that was one of the points I made. I played the role of the contrarian, expanding on ideas I summarized in my last book, A Tear at the Edge of Creation.

While most colleagues in the panel believe that such a theory is achievable and that, possibly, superstring theories will be how we get there, I'm more skeptical. Not so much of superstrings per se, but of the notion that there is such a final theory and that we can know it.

For those of you who don't know what superstring theories are, here is a quick review: Traditionally, physics treats the elementary building blocks of matter, such as electrons and protons (actually, quarks, as protons are made of three of them), as "elementary," that is, indivisible. String theory replaces this paradigm by stating that every particle of matter is actually a vibrating string of sub-submicroscopic size. Like strings of a violin, that can vibrate at different frequencies, these superstrings are essentially lines of energy vibrating in many modes, each related to an energy and thus, via E=mc2, to a particle.

The reason physicists like Brian Greene like superstrings is that they can help solve one of the greatest quandaries in physics, the behavior of gravity at very short distances. Inside black holes, near the origin of time in the young universe, gravitational effects are so tremendously strong and limited to such short distances that we need to use the physics of the very small, quantum mechanics, to describe them. Problem is, it doesn't work, at least with ordinary methods. Superstrings come in to the rescue: since strings have an extension, they alleviate the problem of the "singularity," that is, of going down to zero length. However, the price is very high.

For superstrings to work it needs two things: They must live in ten spatial dimensions as opposed to the usual three; and they need to obey "supersymmetry," a hypothetical symmetry proposed in 1974 that doubles the number of particles in Nature.

So far, we have no indication that either extra dimensions or supersymmetry exist. We also don't know how to test superstring theory: There are no direct experiments that can validate or rule out the theory, only very indirect evidence. Of course, failing to see supersymmetric particles would be the end for superstrings. The Large Hadron Collider in Switzerland is actively looking for them and closing in on the acceptable window of mass values for these supersymmetric particles. Quite possibly, we will know within a few years if reasonable models of supersymmetry make sense, or if they are a figment of the human imagination. After all, not every good idea needs to be true. Only Nature can decide that.

However, even if superstring theories would prove to be correct, a possibility I consider very remote, I'd still not call them a TOE: What we know of Nature depends on what we measure. Hence the ongoing search for unified theories must always revise itself, as we discover more about matter and its properties. At every age, we seem to have the notion that now we will know it all. It's happened over and over again the history of ideas. Of course, all past efforts failed. And they failed because we can't predict what we will be able to measure in the future: as our tools advance so does our knowledge of the world. There is no straight line to knowledge. A superstring theory of the 21st century may collect (unify) our knowledge up to now, but can't be definitive. Our knowledge of the world is necessarily incomplete and, in my opinion, the more meaningful for it. If we have another panel in ten years, I bet we will still be searching for a TOE. Or, hopefully, we will have grown wiser and call it something like "Science Without TOEs."