Accessibility links
Chlamy And The Benefits Of Basic Research : 13.7: Cosmos And Culture The benefits of basic scientific research are not always obvious on first glance. When you look more closely, however, you find the work can lead to discoveries that directly impact the lives of everyday people.

The Benefits Of 'Pond Scum' Explained

The Benefits Of 'Pond Scum' Explained 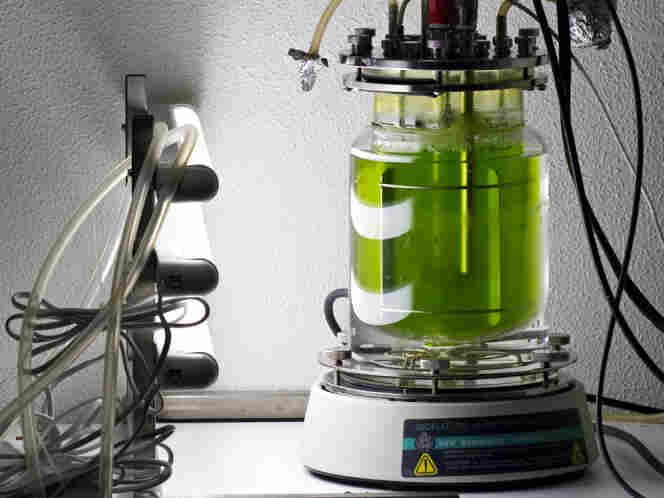 Interesting and useful things are happening in that jar of Chlamydomonas reinhardtii. Umberto Salvagnin/Flickr hide caption 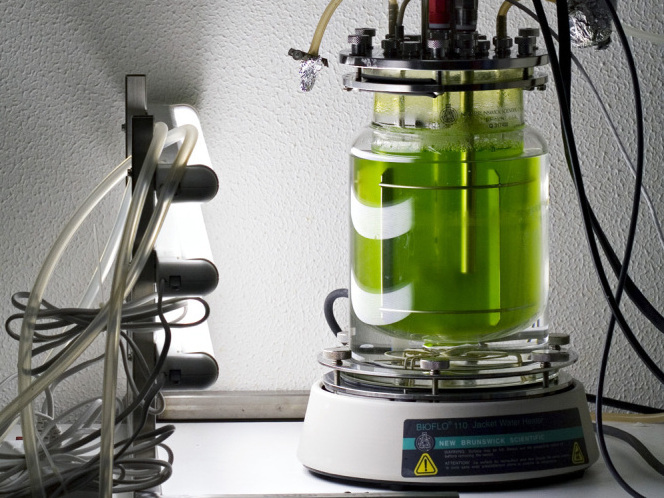 Interesting and useful things are happening in that jar of Chlamydomonas reinhardtii.

Here's a story about how "useless" basic research can yield wondrously useful outcomes — in this case, outcomes that promise new understandings of how our brains work.

I've spent my scientific life studying the sex life of a unicellular green alga called Chlamydomonas reinhardtii (Chlamy). Others in the Chlamy community have spent their lives studying how it performs a very cool trick called phototaxis, allowing the cells to detect and swim towards beneficial light and away from damaging light. It's a trick that allows them to optimize their photosynthetic activity and growth.

Light detection is carried out by an elegant organelle called the eyespot. In the 1990s, Peter Hegemann and his colleagues in Germany purified Chlamy eyespots and attempted to identify the protein(s) responsible for this activity. After a number of false starts, engagingly recounted here, they eventually identified the active protein, which they called channelrhodopsin -2 (ChR2) in 2003.

ChR2 spans the cell membrane of the eyespot and works as a light-sensitive membrane channel. When its chromophore, a derivative of vitamin A, absorbs light, it changes its shape, and this triggers the channel to open briefly and allow positively-charged ions, like Na+ or Ca++, to enter the cell. Such a flux "depolarizes" the membrane, an event interpreted by the cell, in complex downstream events, to indicate the location and the quality of the light source. To prove that they had identified the right protein, Hegemann's group introduced the gene encoding ChR2 into frog eggs and documented that the eggs conducted Na+ when illuminated.

Cool stuff. But — you might well say — who cares how "pond scum" does its thing?

Neurons, it turns out, depolarize and "fire" with Na+ entry. Hence neurons expressing an introduced ChR2 gene (or newly engineered versions thereof) will fire when illuminated, allowing an exquisitely fine-tuned analysis of their function. Even better, a second form of light-sensitive channel derived from an obscure archebacterium allows negatively-charged ions, like Cl-, to enter cells, and when this channel is expressed in neurons, light suppresses their firing. Hence particular subsets of neurons can be activated or inhibited at will by pulsing them with different wavelengths of light, opening up a whole new mode of brain analysis.

Neuroscientists Gero Miesenboeck at Oxford and Karl Deisseroth at Stanford are among the pioneers in this field, now called optogenetics, and should you have the time to watch their totally accessible and lucid 18-minute research presentations here and here, I can promise that your life will be enriched.

But for a quick take, here's a 4-min video from the journal Nature when it dubbed optogenetics the 2010 Method of the Year.

And for a taste of what's coming down the pipeline, a March 2010 Nature publication from the Deisseroth lab, unfortunately only available for purchase but summarized here, uses optogenetics to analyze the phenomenon of anxiety, where anxiety disorders represent highly prevalent psychic diseases and contribute to depression and substance abuse.

When the scientists light-stimulated particular terminals in the basolateral amygdala of transgenic mice, anxiety behaviors were activated, whereas these behaviors were suppressed when the terminals were light-suppressed. Such understandings are likely to suggest novel modes of anxiety-disorder therapy.

Which lets me circle back to an admittedly self-serving, but nonetheless heartfelt, plug for "useless" basic research. The evolutionary process has generated countless innovations in countless kinds of organisms, any one of which might prove highly useful to us humans as we struggle to address our health and environmental challenges.