Accessibility links
Why Mercury Matters : 13.7: Cosmos And Culture As new pictures of Mercury stream in from NASA's Messenger mission, you might tell yourself, "Mars looks a lot more interesting." But don't let looks fool you. 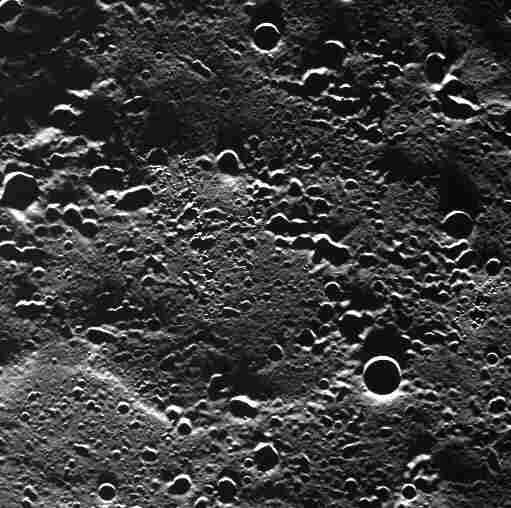 A never-before-imaged area of Mercury's surface is seen from an altitude of 280 miles above the planet during the Messenger's first orbit with the camera in operation. The area is covered in secondary craters made by an impact outside of the field of view. Some of the secondary craters are oriented in chain-like formations. NASA hide caption

Mercury is in the news. After Messenger, NASA's first Mercury mission in decades, achieved orbit a week or so ago, the images of the solar system's innermost world began streaming in.

Without a little background those images might be disappointing.

Mercury, as you can see for yourself, looks a lot like the Moon. It's a dark airless world. Its terrain has been shattered by impacts that pockmarked the surface with craters of all sizes. Compared with the rolling terrain of Mars and its pale red sky or the eternal clouds and acid rain of Venus, Mercury might seem a bit — well — "been there done that".

With new estimates of our galaxy teeming with 50 billion planets, getting a handle on Mercury is vital to understanding all "terrestrial" planets (rocky orbs of the kind likely to have life).

Mercury may look like the Moon but it's really a giant iron cannon ball with a relatively thin layer of rocky mantle and crust above it. No other planet in the solar system has such a large iron core.

Why so much iron? The answer goes all the way back to the disk of gas and dust which formed around the Sun during its own birth. That disk was the womb for all the worlds in our solar system. Mercury's large iron core is a direct reflection of conditions in the disk so close to the Sun (only materials with high condensation temperatures could drop from the vapor state to form tiny grains).

Thus there are clues on that airless world we need to understand — to really understand — the birth of all worlds including the ones with life.