Accessibility links
Climate-Change Skeptics Respond : 13.7: Cosmos And Culture A discussion around the issue of climate change has commentator Ursula Goodenough feeling a little low. She finds hope and renewal, however, in the words of novelist Jonathan Franzen as he talks about his relationship with nature. 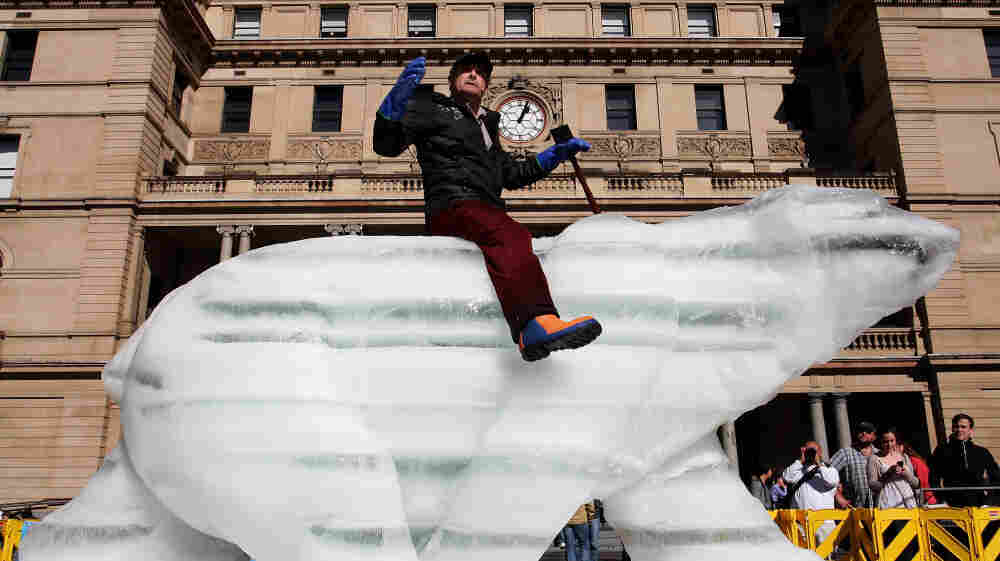 The "Sydney Ice Bear" on Friday in Sydney, Australia. The bear was carved by British artist Mark Coreth from a 10-ton block of ice. The public will be welcomed to touch the bear, leaving imprints that will begin the melting process and act as a metaphor for how humans affect the environment. Lisa Maree Williams/Getty Images hide caption 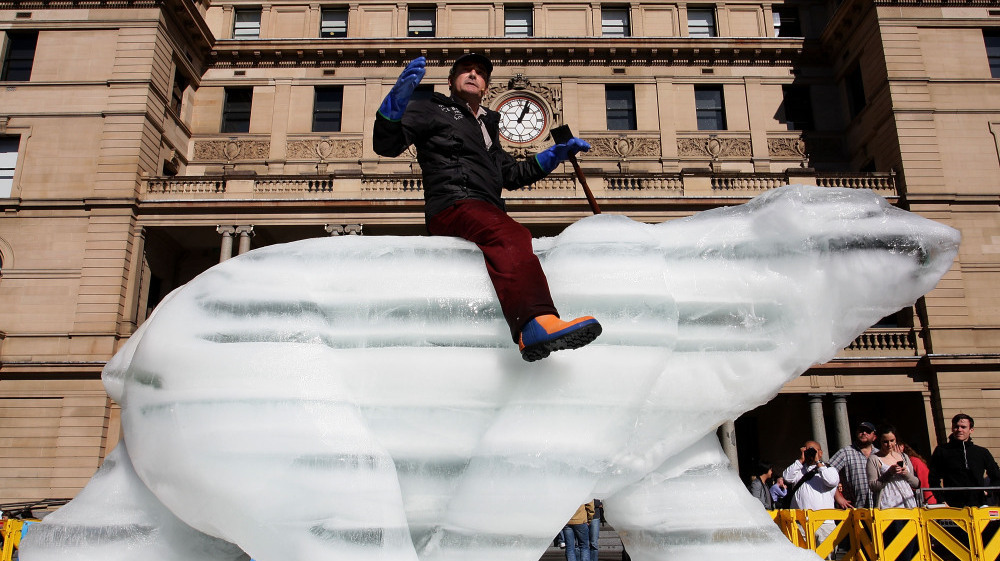 The "Sydney Ice Bear" on Friday in Sydney, Australia. The bear was carved by British artist Mark Coreth from a 10-ton block of ice. The public will be welcomed to touch the bear, leaving imprints that will begin the melting process and act as a metaphor for how humans affect the environment.

Last week on 13.7, I cited a Washington Post op-ed from Bill McKibben that lifted up the possible link between extreme weather and global climate change.

(As it happens, a Yale forum was posted yesterday wherein eight climate experts comment on this possibility. It's an excellent resource.)

I then went on to ask the question "What motivates climate-change deniers?

When 170 comments had come in to my post, I promised that this week I would attempt to synthesize the answers. It's now at 859 comments, and Adam posted a splendid follow-up that's already garnered 473 comments. Since a blog-length synthesis would be impossible, here's a summary of the territory.

The deniers themselves — many of whom, I learned, prefer to call themselves skeptics — invariably claim the same motivation: since the climate-change argument has been either grossly exaggerated or downright falsified, they weren't buying it. As to why it would be the case that scientists were exaggerating or lying, the typical opinions included a belief that the scientists were lining their pockets and/or in cahoots with Big Government to change America as we know it — that kind of thing.

Paradigmatic was a response that someone sent to me in a private e-mail:

Non-deniers offered a wider spectrum of inferences as to what motivates deniers/skeptics. Here are a number of their responses:

--The default setting of the American people is inertia. We tend not to favor things that require a change in our habits, let alone gluttonous creature comforts.

--There was a 10 minute lecture by Dr Gilbert of Harvard that explains this pretty well. He states that humans have evolved to react quickly to events that are Intentional, Immoral, Imminent, and Instantaneous. Global warming has none of these properties, whereas Terrorism has all of them. Hence we fear Terrorism but not Global Warming.

--It's something called "inferred justification"....Essentially people approach things with pre-determined beliefs and then seek out facts to validate their own views and ignore facts that don't support their views....This is why the respondents respond with tons of links. They don't care what the facts are, they just want their belief system validated.

--There's no one motivator, I don't think. For some it's politics — "If the liberals/hippies/Democrats are saying it's true, I must assert that it's false!" — and for others, in America at least, I suspect it's related to our deep (and deeply annoying) cultural bias against the very idea of expertise.

--For my dad it was not accepting the idea that human beings, when faced with cataclysmic change, would be harmed by that change instead of adapting to it.

--Many deniers I speak with really believe climate change is a conspiracy among Eurocrats and America Haters worldwide to "bring us down to their level."

I'm not finding many take-homes in all this. The whole experience has left me pretty weary and disheartened.

So I'll instead close with a link to a piece that lifted my spirits this week. It's a NYT op-ed by the novelist Jonathan Franzen, adapted from his commencement address to Kenyon College. The whole thing is a terrific read, so I'll lift up some excerpts in hopes that you'll be motivated to click over and immerse yourself in his splendid mind and sensibilities.

The ultimate goal of technology, the telos of techne, is to replace a natural world that's indifferent to our wishes — a world of hurricanes and hardships and breakable hearts, a world of resistance — with a world so responsive to our wishes as to be, effectively, a mere extension of the self.

My aim here is mainly to set up a contrast between the narcissistic tendencies of technology and the problem of actual love. My friend Alice Sebold likes to talk about "getting down in the pit and loving somebody."

He goes on to describe how he'd initially embraced environmentalism — "I liked the natural world. Didn't love it, but definitely liked it. It can be very pretty, nature" — but then moved away from it when he realized that there was nothing he could personally do to save the planet.

And then he fell in love with birds.

Whenever I looked at a bird, any bird, even a pigeon or a robin, I could feel my heart overflow with love. ... And now, not merely liking nature but loving a specific and vital part of it, I had no choice but to start worrying about the environment again. ... Now those threatened forests and wetlands and oceans weren't just pretty scenes for me to enjoy. They were the home of animals I loved. ...

When you go out and put yourself in real relation to real people, or even just real animals, there's a very real danger that you might love some of them.