To The Edge Of The Solar System

To The Edge Of The Solar System 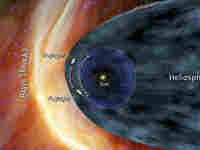 The two Voyager space probes, launched more than 30 years ago, are like the Energizer Bunnies of cosmic exploration. Pushing to the limits of the solar system where the solar wind blasts up against the interstellar medium they continue making new discoveries.

Unexpected observations by NASA's Voyager 1 spacecraft have astronomers once again revising their theories about the radial extent of the heliosheath – the heated outer shell of the solar system. Recent data from the spacecraft have shown a gentle decrease in the velocity of the solar wind at the heliopause – the outer boundary of the heliosheath – not the abrupt discontinuity predicted by current theories. Also, scientists looking at other data from both Voyager 1 and Voyager 2 have found that the magnetic field in the heliosheath is a tumultuous foam of magnetic bubbles, as compared to the graceful arcs of magnetic field lines they had expected.

As we come to the end of the Shuttle Program it's important to remember how much NASA achieved over the years. It has been an investment that keeps yielding rich returns.