Accessibility links
Hurricane Irene = Climate Change: Probably Not : 13.7: Cosmos And Culture But if we want to stay true to the science – which is our best and only hope – then we have to very, very honest about the limits of our knowledge and the range of our ignorance. 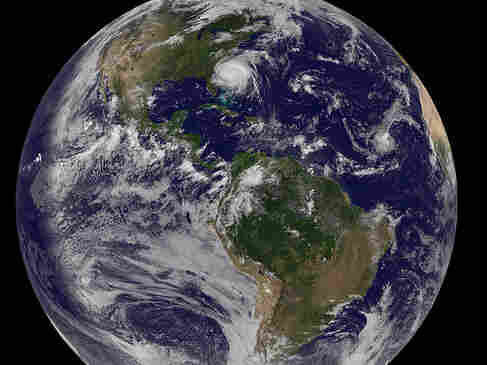 Climate Change and Hurricanes are not easily separated.

A very nice piece was posted today at Dot Earth on why the landfall of Hurricane Irene is, most likely, not due to climate change. Some folks, including those I respect like Bill McKibben, have been implying that we can expect a higher frequency of Irenes in a climate-changed world. But the best science we have so far seems to indicate that a changing climate may not increase the number of landfalling hurricanes coming out of the Atlantic.

As Revkin points out:

"...McKibben's effort to use this United States hurricane landfall as a specter of things to come in a greenhouse-heated world doesn't mesh with the science, which shows a measurable, though subtle, trend in the opposite direction. That's why I agree with Keith Kloor's conclusion that this kind of rhetoric is "undermining the legitimacy" of the call to reduce emissions of greenhouse gases."

The relevant papers on how ocean-air coupling may lower the number of landfalling hurricanes by creating storm-killing wind shears can be found here.

Climate change is real and we are all going to be living with its consequences for centuries. Some of those consequences are better understood than others. Those that are well-understood are more than significant enough to be very worrisome. But if we want to stay true to the science — which is our best and only hope — then we have to very, very honest about the limits of our knowledge and the range of our ignorance.

You can keep up with more of what Adam Frank is thinking on Facebook.

An earlier version of this post mischaracterized the highlighted research as relating to the strength of hurricanes. It has been updated to reflect that the research relates to the probability of hurricanes making landfall.