Accessibility links
The Goldilocks Enigma: Is The Universe Fit For Life? : 13.7: Cosmos And Culture Astronomers are finding Earth-like planets by the dozen. Does this mean that we are close to finding alien life forms out there? And could they be intelligent? Or is intelligence a rare trait in the cosmos? 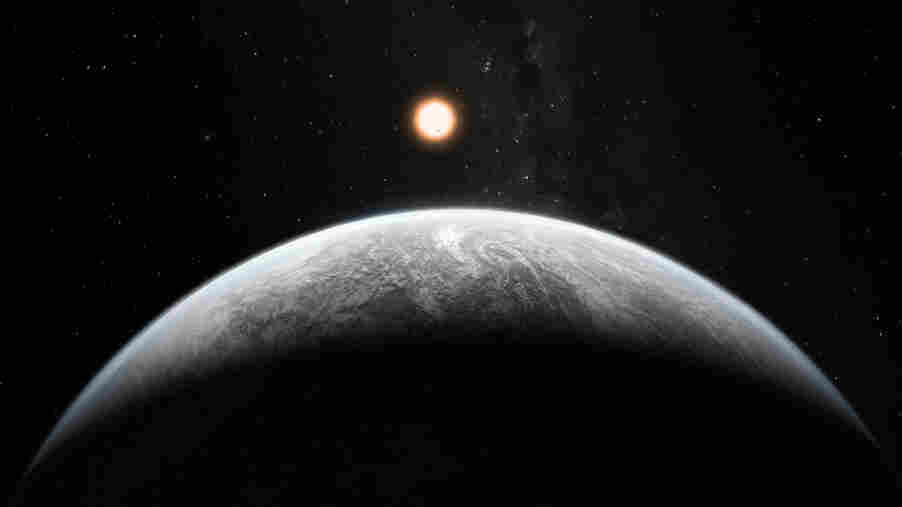 This artist's impression shows the planet orbiting the Sun-like star HD 85512 b in the southern constellation of Vela (The Sail). M. Kornmesser/ESO hide caption 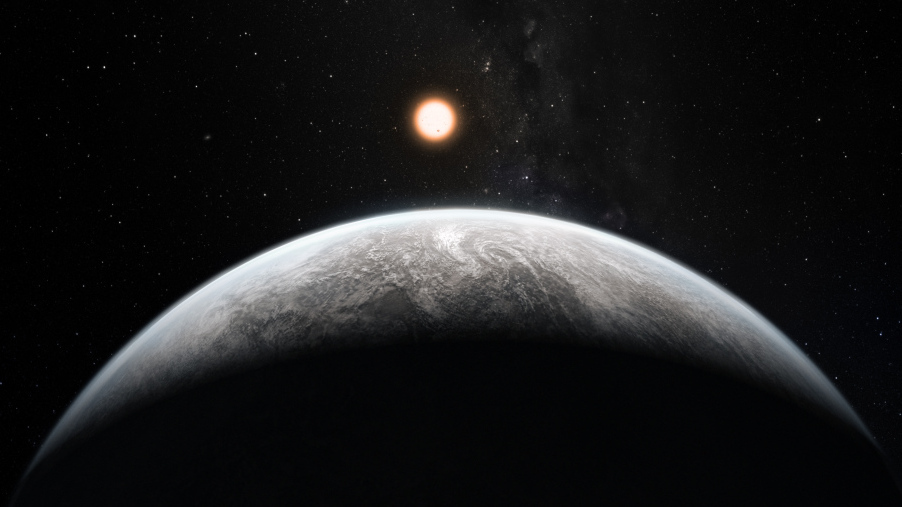 This artist's impression shows the planet orbiting the Sun-like star HD 85512 b in the southern constellation of Vela (The Sail).

As Adam's recent post highlighted, the hunt for planets is going full swing. European astronomers, led by Michel Mayor (University of Geneva, Switzerland), have found what may be the best bet yet for a Goldilocks planet. It has a mass about 3.6 times the mass of the Earth and circles its star in what is known as the habitable zone, a belt around a star where water may be in its liquid state. The planet, HD 85512 b, is about 36 light-years away from here, orbiting its star once every 58 days and hence much closer to it than we are to our Sun.

Of course, we don't know yet if the planet harbors life, or even if it's rocky. It will be many years before we can even resolve a few of the dominant chemicals in its atmosphere. However, the excitement is justified: the more Earth-like planets we find, the higher the chances are of finding life elsewhere. At least life as we know it, the only kind we have hopes of finding so far.

As astronomers zero in on possible habitable planets, it's worth pondering on the often-stated belief that "the universe is just right for life."

How certain are we of this and why? And when we say life, what do we mean by it?

The essential reason why so many scientists are confident that life exists elsewhere is the regularity of the laws of physics and chemistry across the cosmos. The same laws of nature that apply in our solar system apply to galaxies billions of light-years away. They move in similar ways and shine in similar ways to galaxies nearby, allowing us to identify their distance and chemical composition with near certainty. If the same laws apply everywhere and at (mostly) every moment of the universe's history, and if the same chemical elements are found in distant stellar systems, it's fair to assume that the same chemical processes that led to life here on Earth some 3.5 billion years ago will reoccur in other planetary platforms. This is what could be called the argument from regularity.

But is it enough?

The assumption here is that if physics and chemistry are the same then biology will develop. When we think alien life we are thinking in terms of Darwinian evolution via natural selection, which is a very good bet. Of course, we will only know for sure once we discover a sample of alien life, study its genetics, etc. But it's hard to think that the very general principles set forth by Darwin won't apply to other forms of life. If there are multiple life forms and limited resources, the rest will follow.

Of course, that says nothing of the particulars of possible alien life. A very clear distinction must be made between simple, unicellular life and more complex life forms. It's hard not to doubt that Earth is the only planet where life took hold. After all, we have seen how resilient it is here, with extremophiles defying our previously held assumptions of where life can thrive. However, there is a huge difference between simple life and complex life. Contrary to what many believe, evolution doesn't lead to complex life forms: evolution leads to well-adapted life forms.

We had unicellular algae here for about 2.5 billion years and nothing more. The jumps from simple to complex life are many and still poorly understood. For example, on Earth simple prokaryotic cells had to incorporate outside structures to become eukaryotic cells — with nuclei protected by bags; life then had to go from single-celled to multicellular creatures; it had to somehow develop differentiated organs that were nevertheless integrated by functionality; it had to adapt to water, air and land, and to multiple environmental cataclysms; finally, it evolved creatures capable of higher brain functions.

The lesson that we learn from the one example we have is that the history of life in a planet or moon is depends completely on its geological history. If we could change a single major event in Earth's history, say, the collision with the asteroid that killed the dinosaurs 65 million years ago, life here would have taken a different course and we probably wouldn't be here.

So, when we talk life elsewhere we must differentiate between simple and complex life. Earth remains a remarkable place in a universe that, in spite of having the same laws of chemistry and physics, is far from welcoming to life: just look around our cosmic neighborhood, the planets and moons of the solar system: wonderful, but probably barren worlds, at least now.

The new discipline of comparative planetology is teaching us that Earth is a remarkable world. Sure, it's possible that other worlds out in the vastness of the cosmos will have complex life forms and even thinking ones. Be that as it may, for all practical purposes we are pretty much on our own here. And must take care of our home. After all, Earth will survive without us; but we won't survive without Earth.