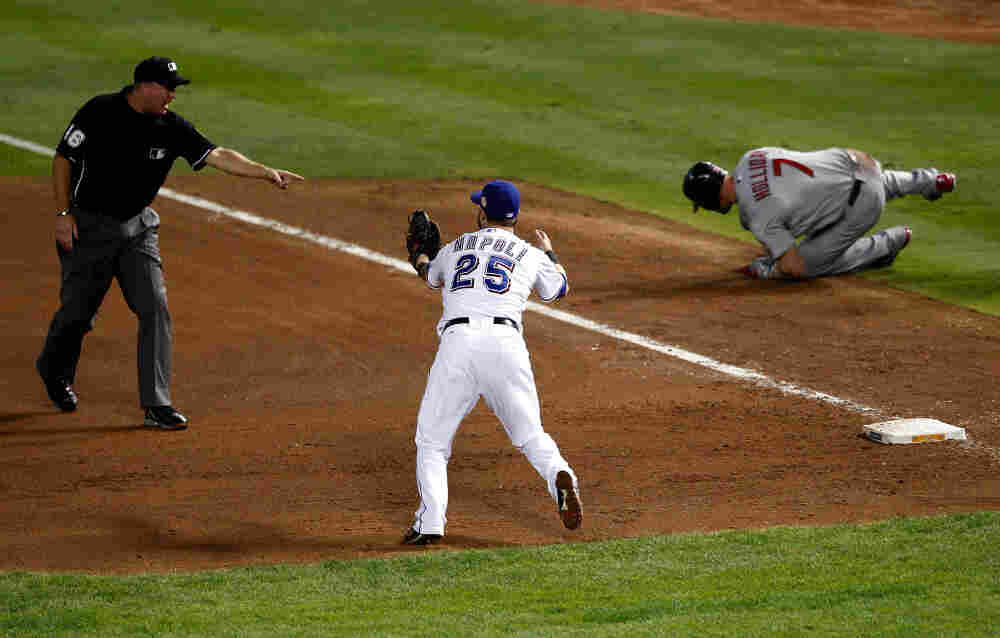 Mike Napoli of the Texas Rangers reacts after first base umpire Ron Kulpa calls Matt Holliday of the St. Louis Cardinals safe in the fourth inning of game three of the World Series. 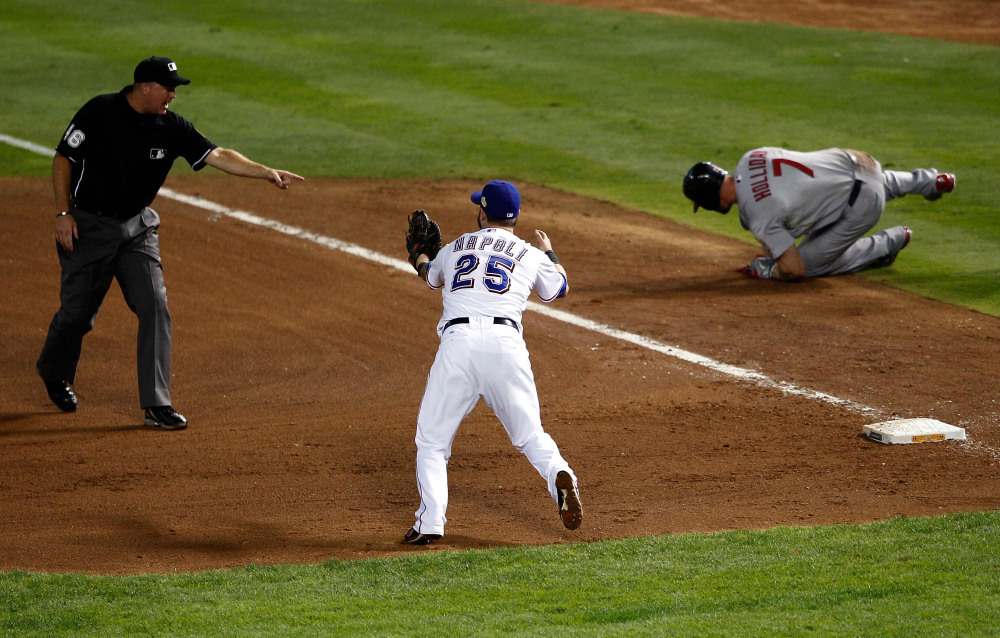 Mike Napoli of the Texas Rangers reacts after first base umpire Ron Kulpa calls Matt Holliday of the St. Louis Cardinals safe in the fourth inning of game three of the World Series.

A bad call by umpire Ron Kulpa at first base in game three of the World Series last week in Arlington — even though it turned out not to have a decisive impact on the game's outcome — has led to renewed controversy about the use of instant replay in baseball, as well as about the integrity of umpires.

In the baseball world, there are two distinct theories of umpiring.

Some view umpires as, in essence, instruments, somewhat outdated, for measuring baseball facts. From this standpoint, every "bad call" is an occasion to demand improvements in measurement technology. Umpires call them as they see them, but they don't see any better than the rest of us. They should be eliminated by, or at least supplemented with, instant replay and other new measuring devices.

Others, however, think of umpires as, in effect, a special class of player in the game; they are no less part of the game than the players themselves. From this standpoint, the demand that we replace umpires has about as much to recommend it as the idea that one might remove or replace the players themselves to improve the game. It's an idiotic idea.

These two distinct ideas about umpiring correspond to what are really very distinct philosophies of the game. Corresponding to the umpire-as-instrument idea is External Realism. According to External Realism, there are umpiring-independent facts of the game — balls are really fair or foul, runners are either safe or out — and the questions we face are merely epistemological, how best to determine the facts, how to find out.

Corresponding to the umpire-as-player idea is Internal Anti-Realism. According to Internal Anti-Realism, umpires don't call them as they see them; umpires, through their calls, make it the case that a pitch is a strike or a ball, a runner safe or out. There are no umpire-independent facts in baseball.

External Realism does a good job accounting for the fact that we all recognize that there are "bad calls" and the fact that dispute and controversy seem to be an ever-present part of the game. Because there are real facts of the matter about what happened, it makes good sense that we reckon umpires can be wrong. In comparison, Internal Anti-Realism seems helpless to make sense of this. If what an umpire says goes, then how can we even take seriously the idea that an umpire might be wrong?

But Internal Anti-Realism gets something right, too. Baseball facts are not physics.

What interests us is whether players succeed or fail, whether they achieve or get lucky. The judgment that a ball is a strike is, really, the judgment that a pitcher delivered a a pitch that the batter ought to have hit. This is not so much a judgment about where the pitch was located, as it is a judgment about whether the pitcher or the batter deserves credit. It is, in the original sense of the term, a forensic judgment. It is, therefore, a decision made within the context of the game, with its distinct interests, problems and dynamics. From this standpoint, umpiring — together with official scoring — are an ineliminable part of the sport. Exernal Realism seems helpless to account for this forensic side of baseball.

External Realism and Internal Anti-Realism are extremist views. A better view — let's call it Internal Realism — grants that there are no baseball facts apart from the internal standpoint of the game.

There is no merely physical, practice-independent conception of what a "fair ball," a "home run" or a "strike" even are. These are events that only exist inside baseball. At the same time, Internal Realism acknowledges that disputes about whether a runner was really out, or whether a ball was in the strike zone, also unfold inside baseball. You don't need to step outside of the practice and take up "a view from the outside" to call plays in baseball. A concern for whether a call was correctly made is something we do precisely from the inside. These questions have the significance they do because we are interested in the game, because we are participants.

From the standpoint of Internal Realism, of course it is legitimate to question an umpire's call. The realist is right about this. There are facts of the matter. But, as the internalist insists, these are facts that only come into focus within baseball, and the disputes themselves, no less than mundane unchallenged calls, are baseball events like any other. Disputing plays does not force us outside baseball, to its boundaries; they happen on the field of play and belong to game itself.

But let us ask: if we adopt this improved standpoint, what should we say about calls for changes in umpiring, for the introduction of instant replay or computerized ball and strike measurement?

This is a hard question to answer, in part because we can reasonably wonder whether this question about the reform of baseball practices is itself an internal or an external question. If we are realists, then we must acknowledge that the outcome of disputes matters. But if we are internalists, then we must acknowledge that to change the basic character of the baseball practice is, really, to change what it is for something to be a ball or a strike, a fair or foul ball; it is to shift and transform's baseball ontology.

What would, or could, count as a reason for doing this?

Last season Armando Galarraga was an out away from pitching a rare perfect game, a game in which he allowed no opposing runner to reach base. A "bad call" at first base by umpire James Joyce robbed him of his deserved glory. Joyce admitted this after the game and, in a wildly unprecedented move, he apologized to Galarraga. The latter accepted the apology with grace and humility and is reported to have said: "Nobody's perfect."