Accessibility links
Indonesian Orangutans May Live On New 'Island' Homes : 13.7: Cosmos And Culture Orangutans suffer when humans destroy their habitat or shoot them as pests or for food. Can a new conservation plan to build islands for 50 injured orangutans help make a difference for these clever apes and other endangered wildlife? 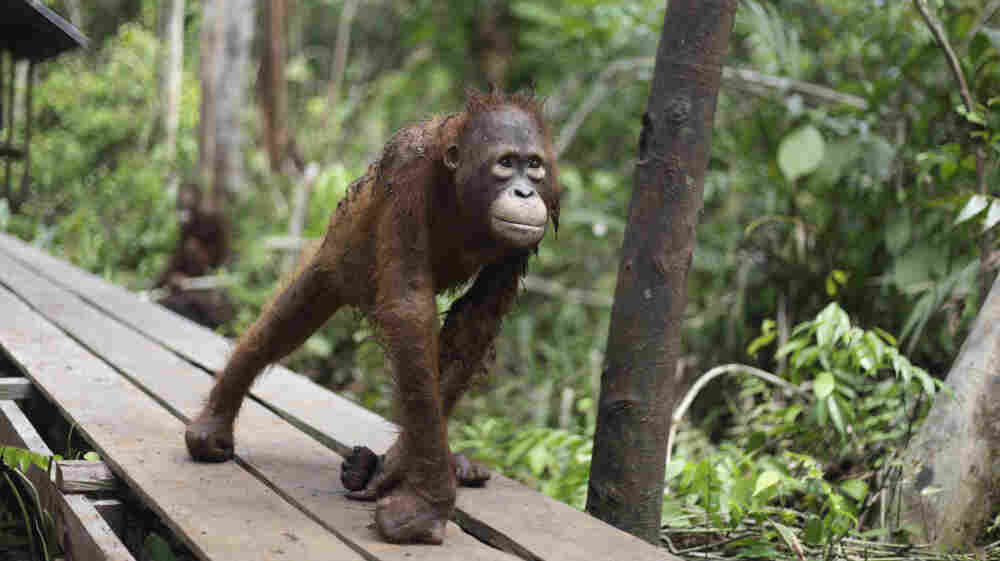 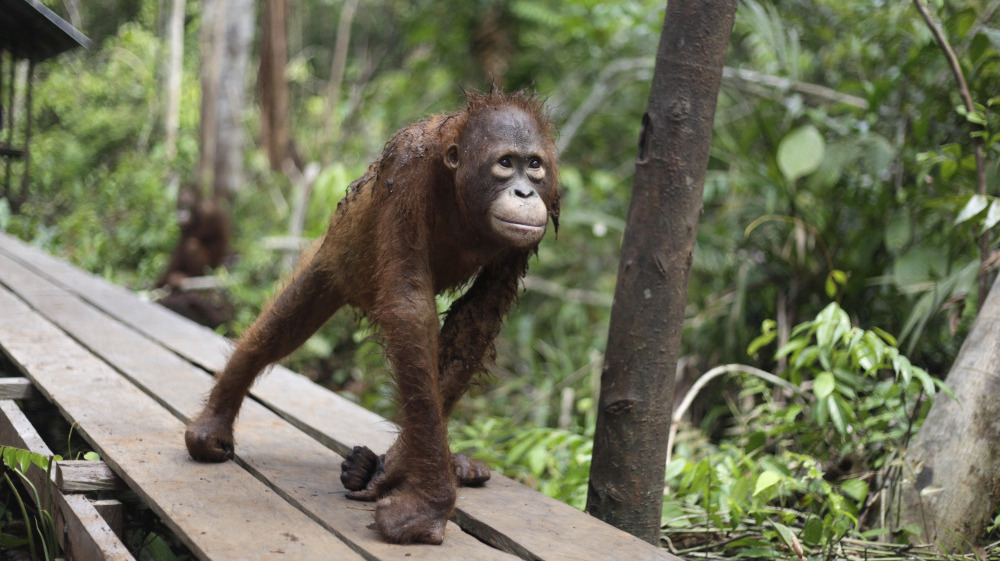 A juvenile orangutan at a rehabilitation center in Pasir Panjang, Central Kalimantan, Indonesia.

In honor of Orangutan Caring Week (November 12-20), I ask you to envision 50 small, rusty cages set up on the Indonesian island of Sumatra. Inside each cage is an orangutan, the red-furred great ape that is the Asian cousin to Africa's chimpanzees, gorillas and bonobos.

When living free in the forest, orangutans — big cheek-padded males, females and clinging offspring — brachiate through the treetops, cluster together when food is abundant, and sometimes fashion tools to obtain fruits and insects.

These caged orangutans once roamed free, too. As we will see, they may do so again, on islands custom-designed just for them. For now, they suffer from having encountered the most dominant ape family of them all: humanity. Some were shot, others had limbs severed. In some awful sense, these ailing orangutans in cages are the lucky ones.

As Erik Meijaard — and 31 co-authors — wrote last week in the journal PLoS One, people who live in another part of the orangutans' range, in Indonesian Borneo, slaughter between 1,950 and 3,100 orangutans annually. Orangutan raids on village crops are a major motivation behind the killings. Sometimes the orangutans are also hunted for meat.

This rate of killing — determined through 18 months of leg work, interviewing people in 687 villages — is surprisingly and unsustainably high.

Further, the world's greed (from which I am not immune) for products that contain palm oil, ranging from cooking oil to cookies, dooms huge swaths of orangutan land every year. Trees are cut down so that palm-oil plantations may multiply. As a result, orangutan habitat disappears, or is cut up into tiny fragments.

The injured animals in these cages, then, represent the barest fraction of orangutans who live endangered lives. Still, these 50 matter deeply to British conservationist Ian Singleton. He plans to build islands for them where they may roam at will.

As reported last month by The Guardian newspaper, Singleton and his organization, the Sumatran Orangutan Conservation Program, want to acquire a tract of land and, by landscaping a series of moats, turn it into a series of artificial islands. Singleton intends to arrange for the apes to have access to fresh water, grass and trees. Taking into account that orangutans cannot swim, he also wants to install an electric fence as a barrier between the red apes and the water.

I admire Singleton's plan. These caged apes represent distinct personalities. I know this because three decades ago I fell hard for orangutans. By observing their tool-using skills and social dynamics in captivity, I learned up-close how different one clever orangutan is from the next.

(Birute Galdikas then invited me to her field site in Borneo, but told me, then in my mid-20s and quite unattached, to please marry first. Only wedded women were respected in her village, and, perhaps, she said, I could select someone from my anthropology seminar for this purpose. So ended my orangutan period; I went on to study other primates.)

If his scheme works, Singleton will be making the world an immeasurably better place for 50 apes whose lives have intrinsic value.

Singleton's plan also brings much needed attention to the plight of orangutans in general. One lesson we can take from their plight is that each of us can pitch in to help. Consumers can research which products contain palm oil and buy fewer of them, or replace them with eco-friendly substitutes. The public can also support organizations that effectively aid orangutans, like Singleton's or Galdikas's, or here in the U.S. through the Center for Great Apes in Florida, where I spent a fascinating day a few years back.

Finally, we may emulate Singleton by thinking outside the box when it comes to action plans for endangered-species conservation. If island-building for sick and injured orangutans is a success, might we create new landscapes for healthy polar bears forced to live in human-altered ecosystems? Can we find a way to make such places natural enough, and enticing enough, for the animals so that we aren't just crafting glorified zoos for them?