Accessibility links
Retirement Or Research Lab? New National Report Issued On U.S. Chimpanzees : 13.7: Cosmos And Culture Are chimpanzees necessary for biomedical research in the U.S.? Considering today's long-awaited report on this question from the National Academies, anthropologist Barbara J. King suggests the answer is "no," and that "biomedical apes" deserve retirement. 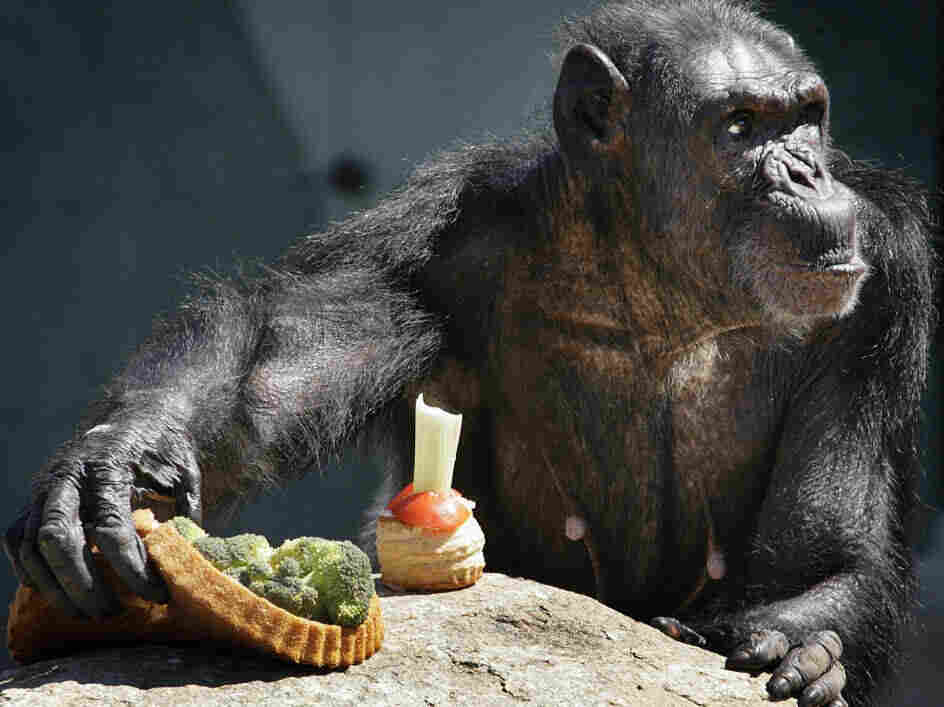 While the United States continues to use chimpanzees in biomedical research, other countries have stopped the practice. This chimpanzee is one of 13 previously used by the Dutch for animal testing. The group was moved in 2006, when this photo was taken, to a retirement facility. AFP/AFP/Getty Images hide caption 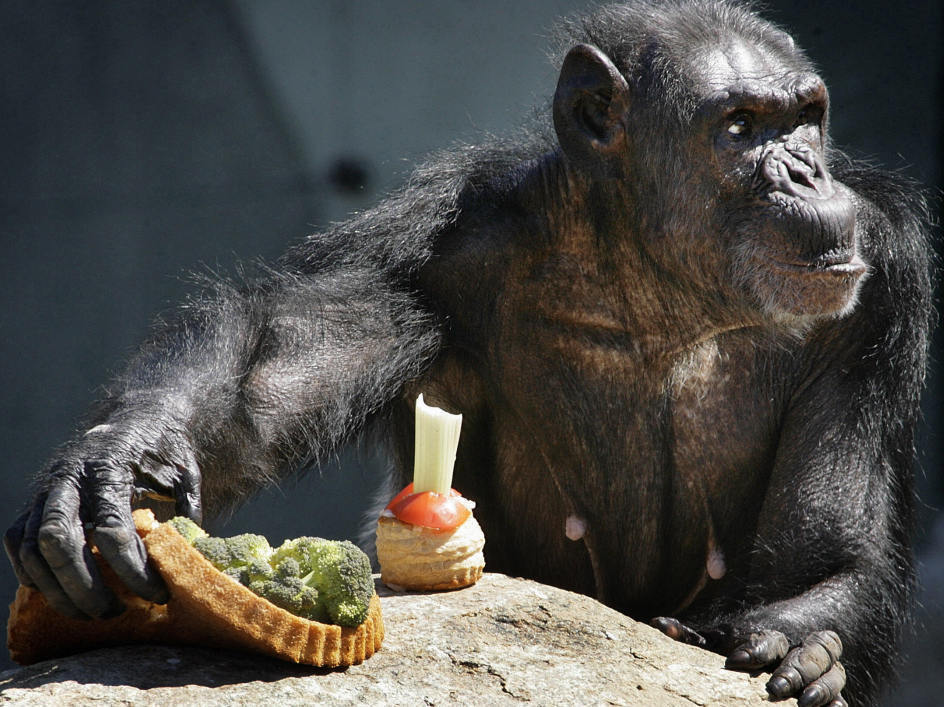 While the United States continues to use chimpanzees in biomedical research, other countries have stopped the practice. This chimpanzee is one of 13 previously used by the Dutch for animal testing. The group was moved in 2006, when this photo was taken, to a retirement facility.

This morning the Institute of Medicine (IOM) of the National Academies issued a report that opens the door for chimpanzees' continued use in certain biomedical research projects. (Our friends over at Shots also report on this today.) Though the report says that "most current biomedical research use of chimpanzees is not necessary," it sees "notable exceptions" in specific areas.

That the IOM does not endorse an outright ban on pain-causing research using these apes is a disappointment, especially considering the report acknowledges chimpanzees are highly intelligent primates capable of feeling grief and depression.

The IOM says certain forms of monoclonal-antibody and, perhaps, hepatitis-C research (though on the latter the committee split its vote) may require chimpanzees in order to be successful. Further, the report states that it "would not close the door on the possibility that chimpanzees may be needed in future research" concerning diseases or disorders not yet identified.

As I read the IOM report (made available one day early to the media), I felt distress for the 937 chimpanzees currently available for biomedical testing in U.S. facilities. The door that the IOM leaves open may well lead right to pain and distress for some of these chimpanzees.

As the editors of the magazine Scientific American noted when they supported a total ban two months ago, the United States is the only nation besides Gabon that allows its chimpanzees to be used in this way.

I suspect that some people will embrace the report as a step forward on behalf of chimpanzees. Some of the language is welcome, as when the report acknowledges the "moral cost" of using chimpanzees in invasive research. Still, in key passages, the report is weak.

Congressional inquiry led to the IOM's collaboration with the National Research Council in producing this report for the National Institutes of Health (NIH), which funds the majority of federally sponsored biomedical projects using chimpanzees. The IOM report will help determine the fate of 176 chimpanzees currently in New Mexico, whom the NIH hoped to move back to a biomedical arena in Texas. Chimpanzee advocates believe these apes deserve to retire.

Aware that the quality of these chimpanzees' lives hang in the balance, I was powerfully struck by the differences between two sets of guidelines published in the IOM report: those for comparative genomics and behavioral research, on the one hand, and those for biomedical research on the other.

When it comes to genomics and behavioral research, the chimpanzees are, to a degree, in control. The apes must, the report says, be able to choose whether to participate in any given experiment. In the report's language, the chimpanzees must be "acquiescent." In addition, the research must be performed "using techniques that are minimally invasive, and in a manner that minimizes pain and distress."

These two criteria — voluntary participation in combination with minimal pain and distress — are absent from the guidelines for biomedical research. The focus in the biomedical guidelines is on ensuring chimpanzees are the only viable testing method for a line of research critical to human health.

Why would the biomedical guidelines differ? Why do they not speak to the issues of chimpanzee acquiescence or pain and distress? The answer is all too clear: biomedical research would grind to a halt, because no chimpanzees would elect to endure the multiple needles, surgeries, or other invasive procedures involved. The apes would refuse to be "acquiescent" in their own pain and distress.

In the wake of the IOM's report, it comes as an emotional relief to think of apes like Bobby and the others who now live free of laboratory confinement, rescued by the Save the Chimps sanctuary in Florida. Through the outcome for apes like these, we may construct a different door than the IOM's and walk through it. On a reasonable schedule — see the Scientific American editorial on this point — chimpanzees currently available for biomedical research should be retired. Let these magnificent creatures reside where they may be "acquiescent" in their own peaceful lives, free of pain and distress.