Accessibility links
Assimilation: Siri And Your Life With The Machines : 13.7: Cosmos And Culture Now we have taken another step into making our machine fantasies a reality. It is, literally, impossible to know how things will turn out. But we should at least be cognizant of the corners we turn. 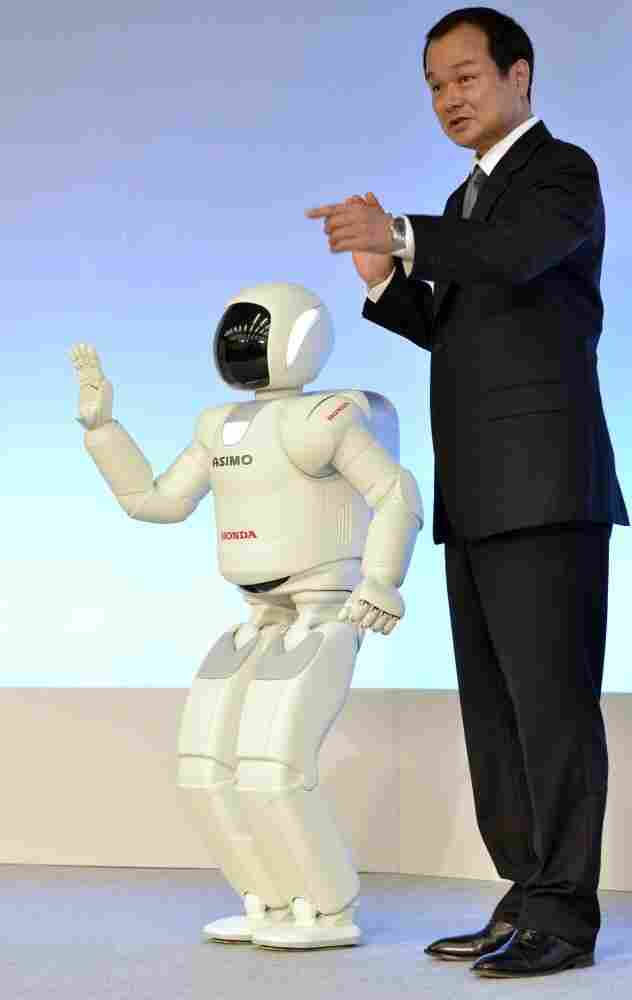 It has begun. Did you notice? Did you make note of it somewhere safe for future historians to find? We've taken a small step across a divide, a doorway separating one kind of past from another kind future. It's a future we have been anticipating for some time, even if we never knew exactly what living in it would feel like. Now we know because Siri has told us.

The machines are here and they just want to be helpful.

In case you were sleeping for the last few months, Apple's iPhone 4s has appeared and includes Siri — an "intelligent software assistant" and "knowledge navigator." Of course, if that was all there was to Siri then I wouldn't be writing this post. What makes Siri different from, say, a Palm Pilot of 10 years ago is the conversation. With Siri you don't type, you talk. It almost feels like there is someone out there talking back.

Now the purists may tell you that voice recognition and natural language user interfaces are nothing new. It's been a DARPA research project for 40 years (many teams at many places including the University of Rochester). Other applications have included natural language interfaces before. So what is the big deal? The answer is simple: assimilation.

While Bell's first telephone call made history — "Watson come here, I need you" — what really mattered is when the guy down the block started using a phone to call his girlfriend. From the clocks appearing in even the smallest village town square to radios becoming standard living room furniture, the invention of a new technology is often not the most important part of the story. It is only when a technology becomes assimilated, only when its scientific and engineering principles become the raw material for culture building that new and unforeseen futures become possible.

Rather than a focused application with a limited set of staccato commands, Siri (and similar technology on the Android platform) represents something new, something with broad consequences for how culture creates meanings through technology. As you read this, a non-trivial number of human beings are already conversing with their machines through Siri. That is assimilation and, even if we can't quite see what is happening at the moment, that moment of assimilation is when things begin to change.

As Charlie Brooker wrote in The Guardian of his Siri interactions:

"... last week, I experienced that watershed moment: for the first time, I spoke to a handheld device unironically. Not for a laugh, or an experiment, but because I wanted it to help me."

"So that's that. I can now expect to be talking to machines for the rest of my life. Today it's Siri. Tomorrow it'll be a talking car. The day after that I'll be trading banter with a wisecracking smoothie carton. By the time I'm 70 I'll be holding heartbreaking conversations with synthesized imitations of people I once knew who have subsequently died. Maybe I'll hear their voices in my head. Maybe that's how it'll be."

And that is how it will be. But unlike our assimilation of other technologies, Siri's appearance bodes something else as well. Once everything around us becomes "alive" and "intelligent" then the cooperation between human and machine takes that inevitable step off the cliff.

For decades science fiction has been exploring the pathways in which assimilation takes on another meaning. From the Borg of Star Trek to the machine world of the Matrix, we seem both transfixed and terrified by what we are doing. Unlike clocks, telephones and radios, the more intelligent our machines become the greater the sense that we are handing over something dangerous to their care. It's the ghost in the machine that has been haunting us since the earliest days of our cybernetic fantasies.

Now we have taken another step into making those fantasies a reality. It is, literally, impossible to know how things will turn out. But we should at least be cognizant of the corners we turn.

You can keep up with more of what Adam Frank is thinking onFacebook and Twitter. His new book is About Time: Cosmology and Culture at the Twilight of the Big Bang.