Accessibility links
Storytelling And The 'Uncanny Valley' : 13.7: Cosmos And Culture Animators find it difficult to bring the realistic human form to life on the screen. Why is this? The author suggests it has to do with the way we tell stories.

Storytelling And The 'Uncanny Valley'

Storytelling And The 'Uncanny Valley' 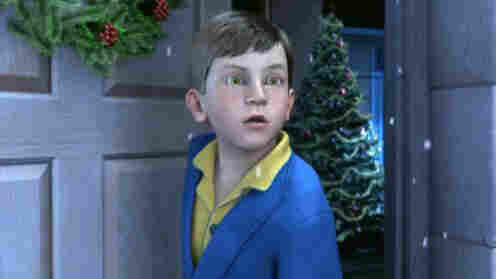 Many an animated character wouldn't seem so unreal and dead if it didn't seem so real and alive!

This is a puzzle that has long troubled animators. If you saw Robert Zemeckis' The Polar Express, you know what I'm talking about. Remember the dead eyes of the characters, their zombie-like vacancy?

Animators do an excellent job bringing the nonhuman to life on the screen — think of WALL-E, or the enchanted broomsticks in Fantasia, not to mention Mickey Mouse himself — but they falter with the more realistically human. And isn't hard to see why.

As Lawrence Weschler, who takes up this topic in the lead essay of his excellent new book Uncanny Valley: Adventures in Narrative, puts it:

"When a replicant's almost completely human, the slightest variance, the 1 percent that's not quite right, suddenly looms up enormously rendering the entire effect somehow creepy and monstrously alien (no longer, that is, an incredibly lifelike machine but rather a human being with something inexplicably wrong ..."

This precipitous drop off in psychological reality, or in normalcy, as you get close to verisimilitude, but not close enough, was first dubbed "the uncanny valley" in 1970 by the Japanese roboticist Masahiro Mori.

As Weschler suggests, good story telling (supported by effective sound and music) is enough to make even the dumbest doorstop think and feel on the screen. So maybe the uncanny valley has something to do with storytelling?

What makes animation possible in the first place is our evolved tendency to see mind where there is none (on a sock puppet, or in a line drawing). This tendency runs counter to another basic cognitive trait, our natural hyper-sensitivity to even the most subtle inflections of face, posture, movement. The uncanny valley opens up because these two dispositions collide: we experience the mind behind the animated humanlike face — just as we can project mind onto a teddy bear — but we can't help but experience it as in some way deviant; as "a human being with something inexplicably wrong."

Two interesting upshots. First, on this approach, if animators want to bridge the uncanny valley, they'd better find a way to cover that last 1 percent; they'd better find ways more effectively to replicate that complex choreography of eyes, skin, bone, mouth and muscle that is the genuine, animate human face.

Second, there's no obstacle in principle to bridging the valley. It's just a matter of time, money and research collaboration between animators and cognitive scientists.

Consider this: the story-telling art forms — here, for the sake of brevity, I consider only film, writing and animated film — are each driven by and capitalize on different feelings, different stances, different kinds of desires on the part of the audience.

The basic impulse driving film as a storytelling art is the impulse to look, see, and watch; when it comes to film, we like to peep and spy. Film is the voyeuristic art. Of course we know, intellectually, that what we see, when we watch a film, is the work of directors, producers, technicians, etc. But the thrill, the magic, the excitement of the movies comes from the feeling that we have a transparent window onto the lives of others. Our primitive stance is that of the witness.

Fiction writing is altogether different. We may read fiction with voracious appetites, but when we do so we do not take up the stance of the voyeur, at least not typically. No, fiction is an act of telling and what we encounter, or seem to encounter, when we read a novel, is the story teller. I don't mean the author, or even, necessarily, the narrator. Exactly who or what we encounter is very often in no way self-evident and the fun may stem from working it out. It remains the case, though, that what is revealed to us, exposed, in works of fiction, is not worlds that we seem directly to experience, as in the case of film, but, rather, the mind of the teller. Fiction is a testimonial art (and whereas film is a cult of the actor, fiction is a cult of the writer).

Now we come to cartoons. They occupy a third position still. The underlying impulse behind our fascination with animation is not the impulse to watch, nor is it the impulse to understand the story or the story teller; it is, rather, the impulse to play. Cartoons put us in the mood for play, and we do not so much watch as we participate. Cartoons are the playful art.

Back to the uncanny valley. A movie like The Polar Express traps us in a kind of rhetorical contradiction. In so far as the characters resemble living human beings, we are invited to take an interest in them; we feel the impulse to watch them; we are invited to take up the stance to them that would be appropriate to live-action movies. But in so far as we are watching what is manifestly an animated film, then we are at one and the same time pulled to take up the altogether opposed attitude appropriate to animation, that namely of viewing the characters as mere play things. We're caught in a rhetorical contradiction: real living human beings are not play things; toys are not the sort of thing we are thrilled to watch.

Cartoons don't give us glimpses of worlds, they give us worlds to play in and toys to play with. Live-action movies, in contrast, don't give us opportunities to play; they give us access to hidden worlds. Here, then, is what I propose: the uncanny valley yawns not when animators fall short in their rendering of the human body — even if in fact they do — but rather when they get confused about what kinds of stories they are telling: Are they inviting audiences to play, or giving them an opportunity to watch? In this confusion, the story dies, and with it, the light in the eyes of the characters.