Accessibility links
Cat Week Is Every Week : 13.7: Cosmos And Culture For commentator Barbara J. King, it's one thing to study the ins and outs of animal emotion as part of her day job. It's quite another when she shares up-close the emotions expressed by some of the 26 cats, including strays and ferals, under her care.

When Animals Love Us Back

When Animals Love Us Back 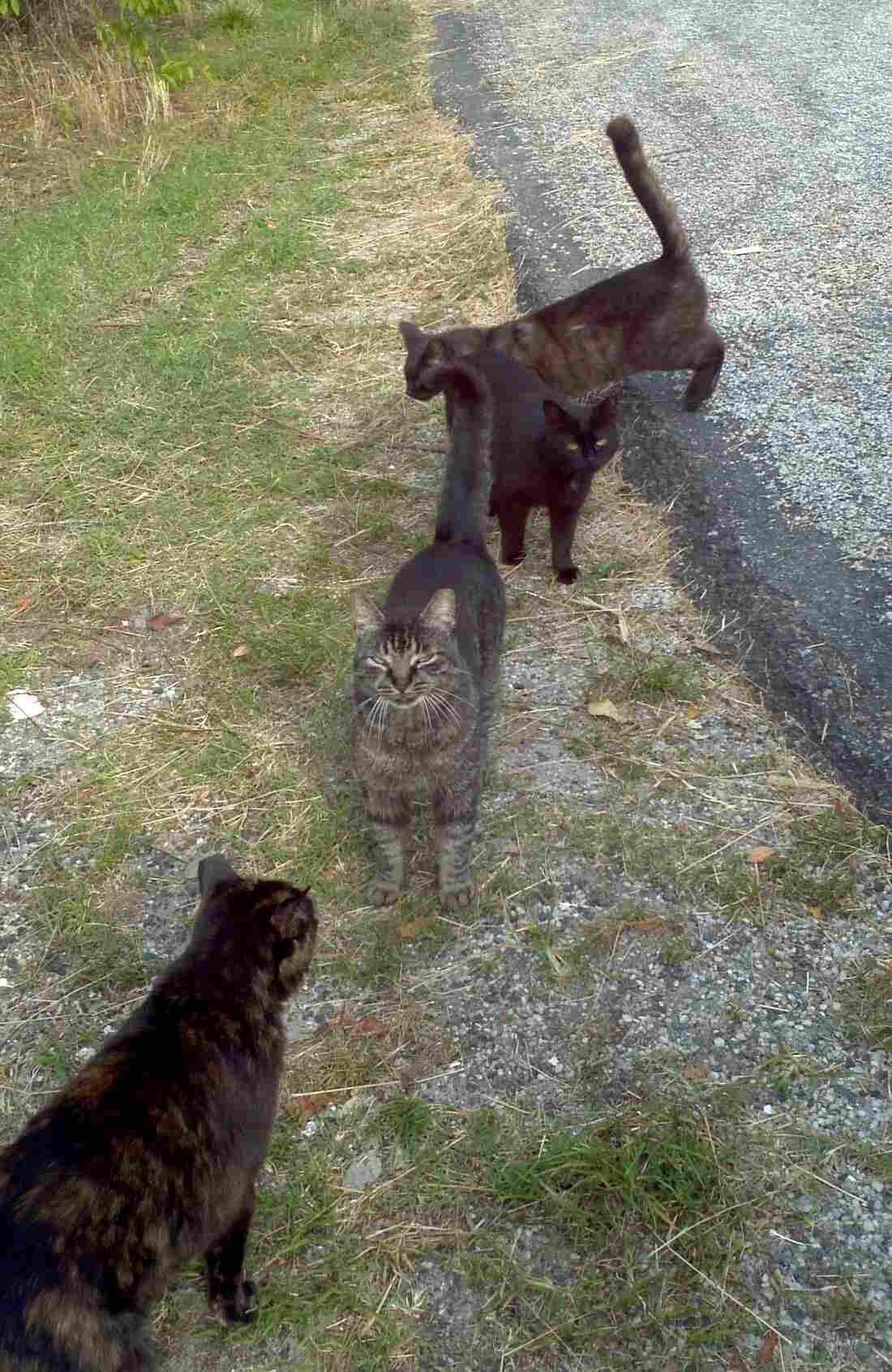 Looking for love, or food, or both? Barbara J King hide caption 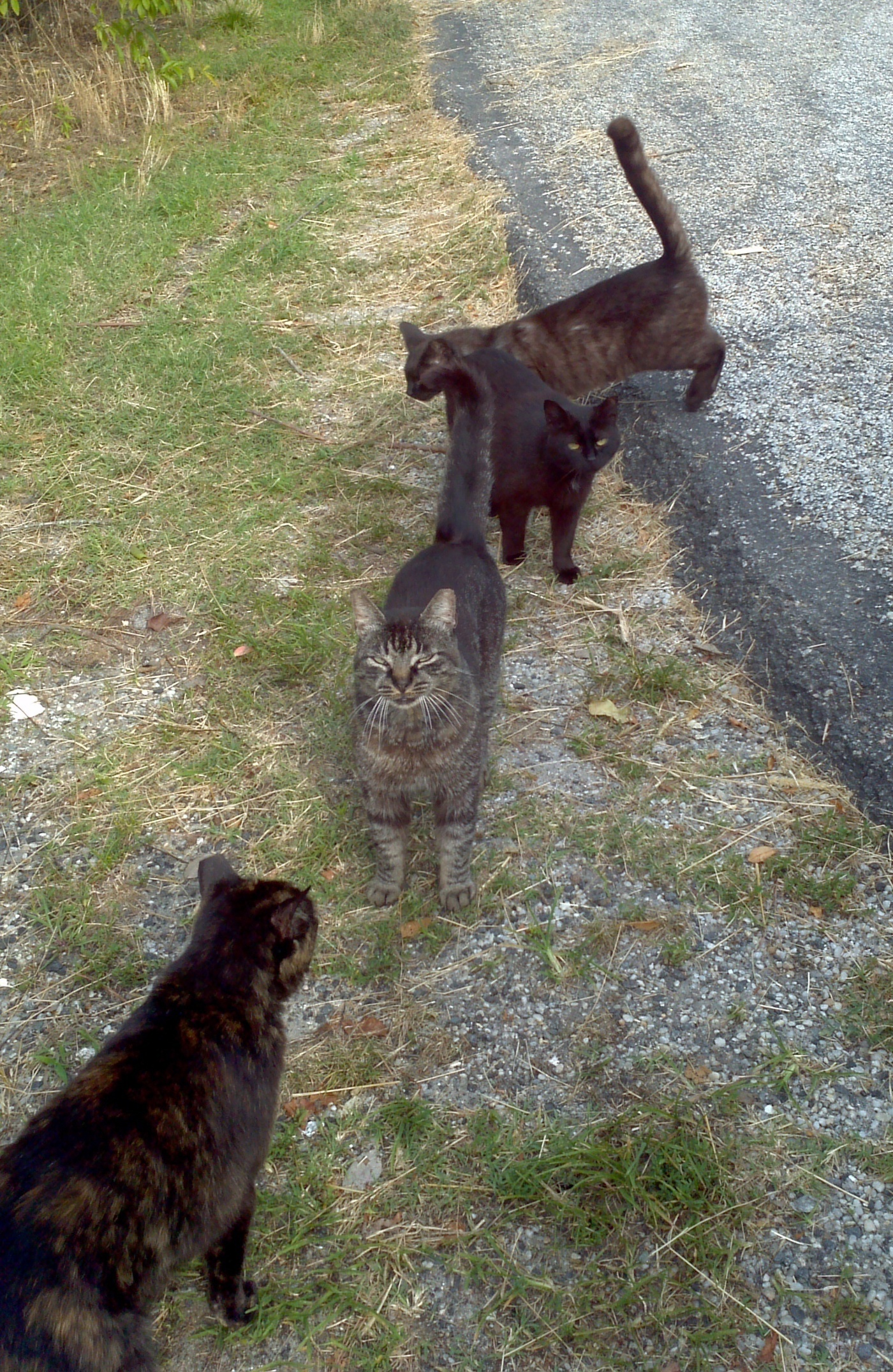 Looking for love, or food, or both?

For seven early summer days each year, while my husband enjoys a hiking break, I take over sole care of the cats who live at our mini-sanctuary.

This year, I had time to think as I fed, watered, cleaned up around, occasionally medicated and just plain enjoyed the 26 cats. It's so powerful to really take in the fact that we humans live with, or near, many other animals who express their own emotions.

The joy of play, the sadness of mourning, or the hostility that underlies conflict is often expressed by animals only with each other, accompanied by complete indifference to humans. Nature isn't about us.

But for animals who live alongside us? Sometimes, we love them and they love us back. When that happens, for me all the intellectual stuff — definitions and hypotheses about the expression of animal emotion — goes right out the window. I just bask in the sun with an animal friend at my side.

Twenty-six cats is a lot. Fortunately, we're not candidates for one of those pet-hoarding TV-reality shows: only six live indoors with us full-time.

Two are strays, who wander our yard with a clock-like awareness of meal time. Another dozen make up an eclectic mix of feral and strays (Alley Cat Allies explains the difference) who reside in a 1,400-square-foot pen that my husband built in our backyard. It's a low-rent version of a feline spa, with shady hiding places, climbing areas and a two-story shelter. 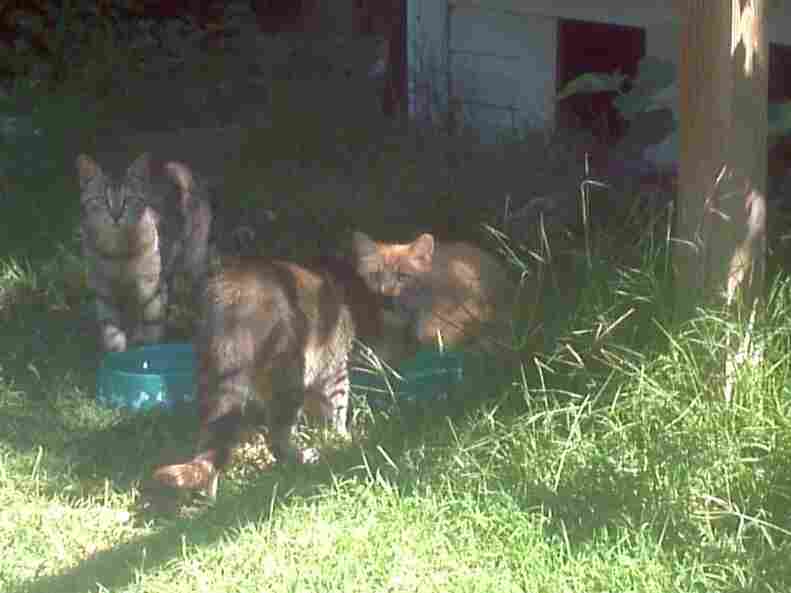 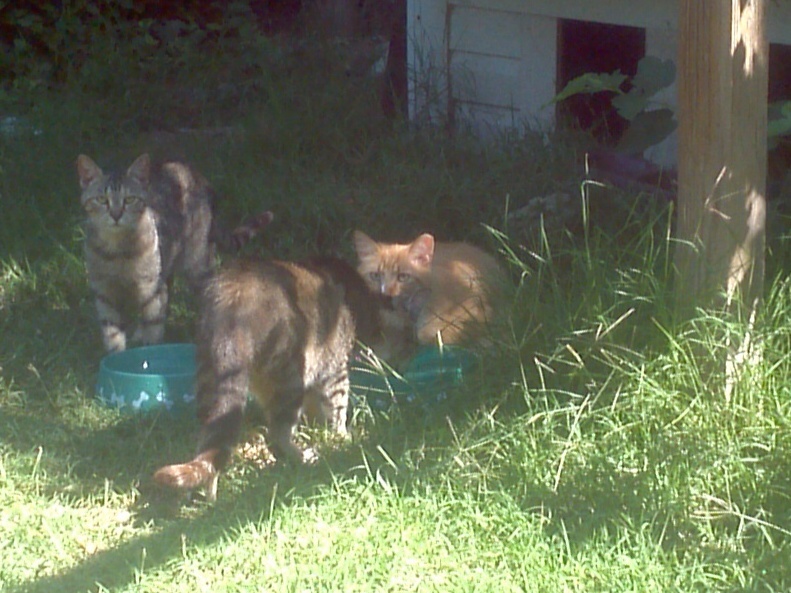 Lounging in the pen

Five more cats live on the water nearby; that's the feral colony we manage. The 26th cat is a newbie, an abandoned male with medical issues who resides at our local spay-neuter clinic, but joins us some weekends when the clinic is closed.

We try to stay mindful of larger issues. Bird-lovers often get angry at us feral-cat rescuers on the grounds that our cats kill birds. That's often true. Our ultimate goal, though, is no more feral cats. That's why all our charges sport that jaunty left ear-trip: the instantly recognized cat-rescuer symbol that a cat has been fixed.

My Cat Week was filled — as are all my weeks — with moments of love, shared with cats in ways and degrees according to their individual natures. 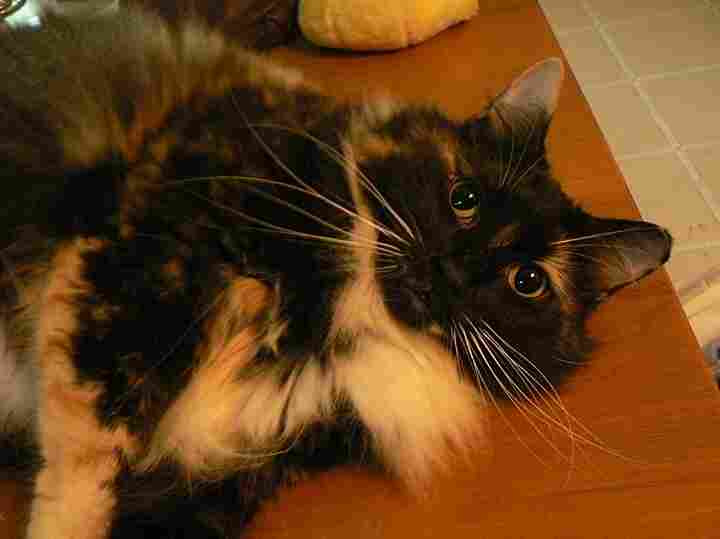 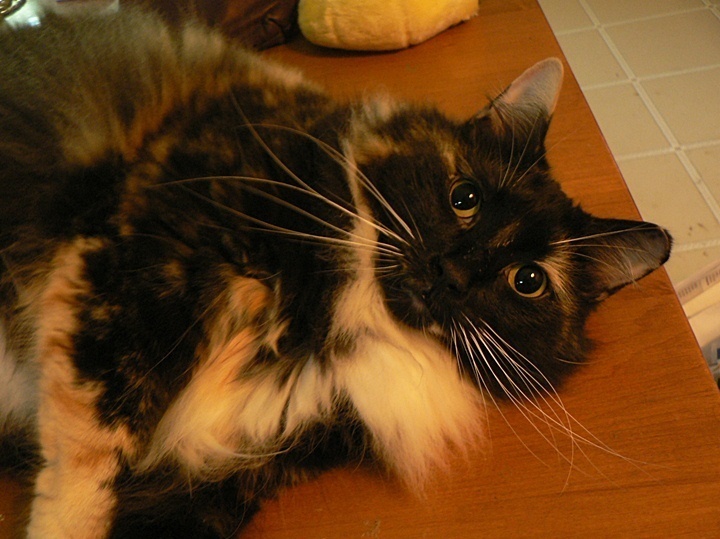 Diana (pictured here), an indoor cat who was abandoned as a kitten at the feral colony, relaxed her considerable bulk along my body as I stretched out to read. After three years, she trusts precisely two people in the world; in anyone else's presence, she bolts and hides in a cabinet. 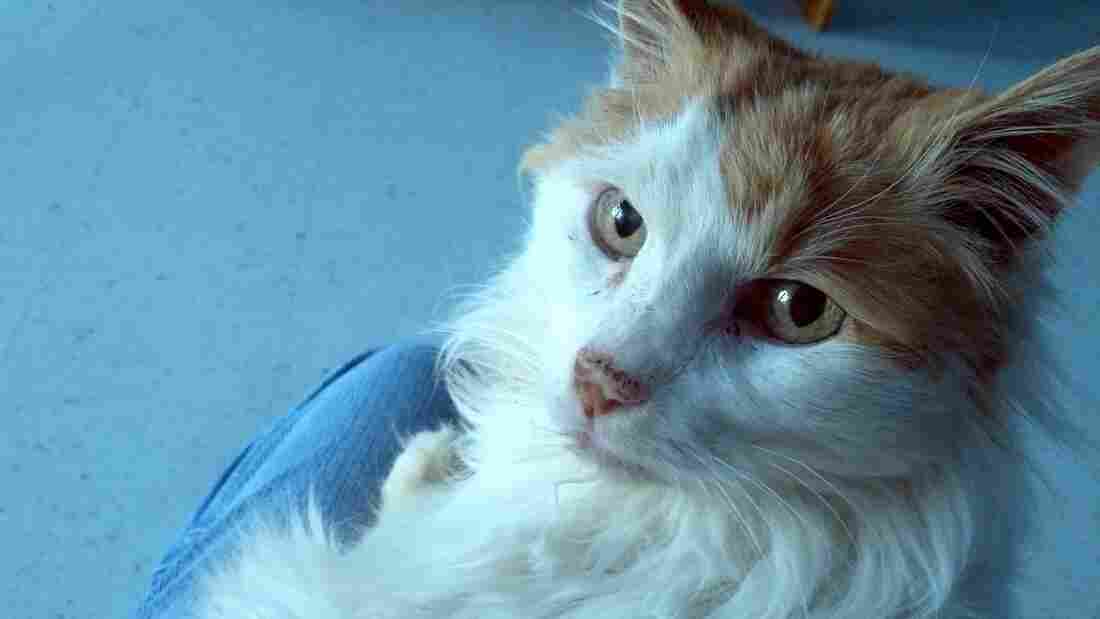 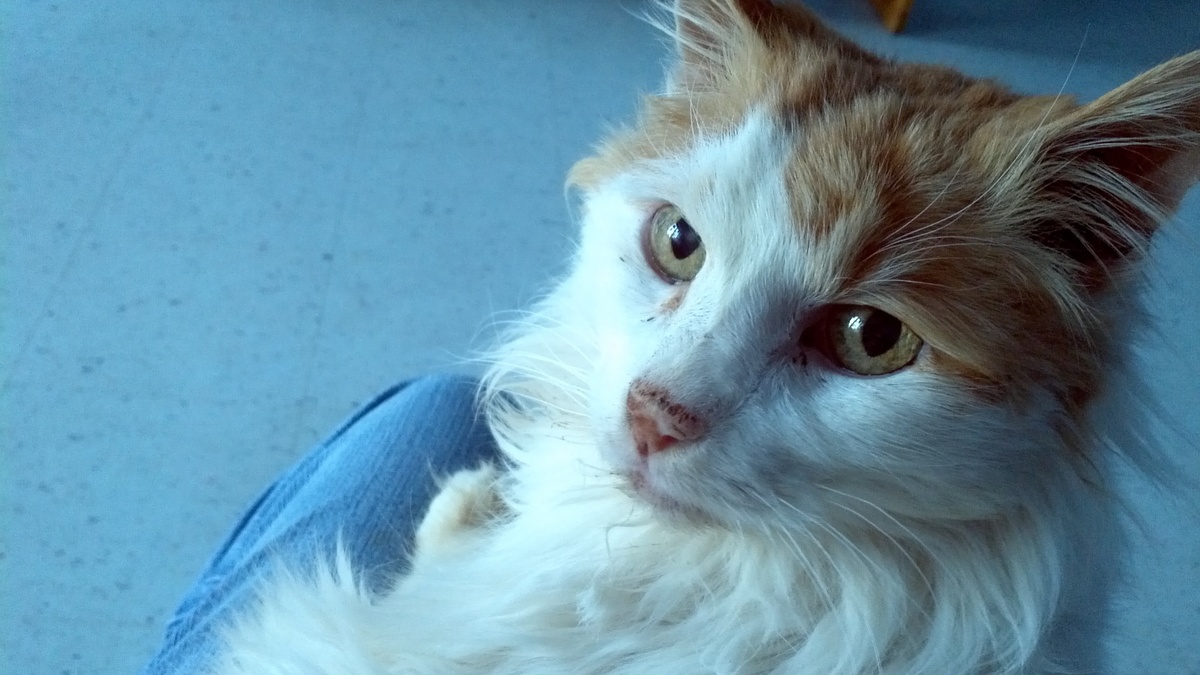 Jonah (pictured above, at the clinic), returned my affection by nestling against me, purring as he surveyed a home all his own.

Some of the 26 remain content to treat me as a tall, animated feeding machine; others are still too shy to allow any close contact. I love each one of these cats, too, and I smile when they turn their hopeful-for-food faces upwards at my approach.

But it absolutely rocks my world when the animals whom I love — especially the animals who have had a tough, unkind start in life — choose to love me back.