Accessibility links
Stars, Planets And The Meaningless Life : 13.7: Cosmos And Culture For that one moment all the meaning and concern I schlep from one day to the next just evaporated before my small place in this very big galaxy.

Stars, Planets And The Meaningless Life

Stars, Planets And The Meaningless Life 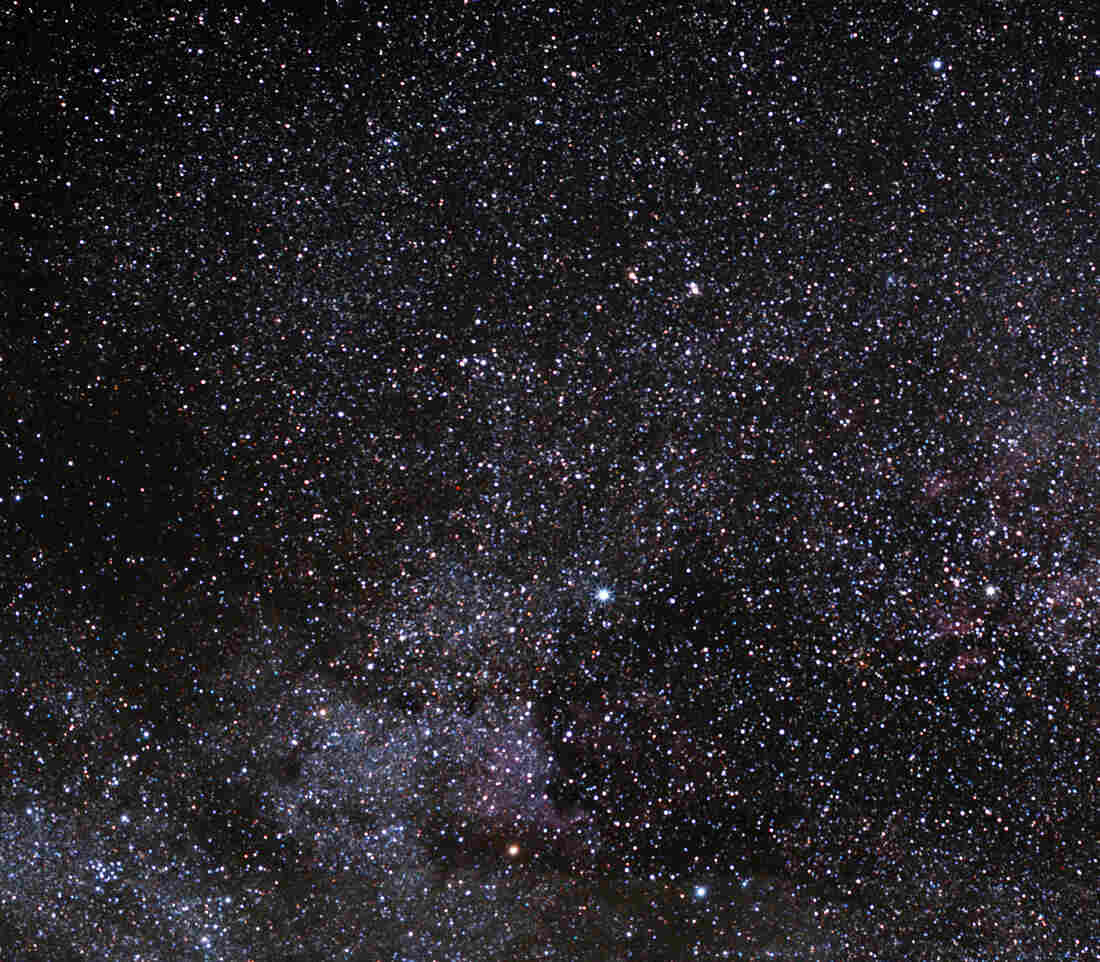 Other planets are out there, many other planets. S. Brunier/ESO hide caption 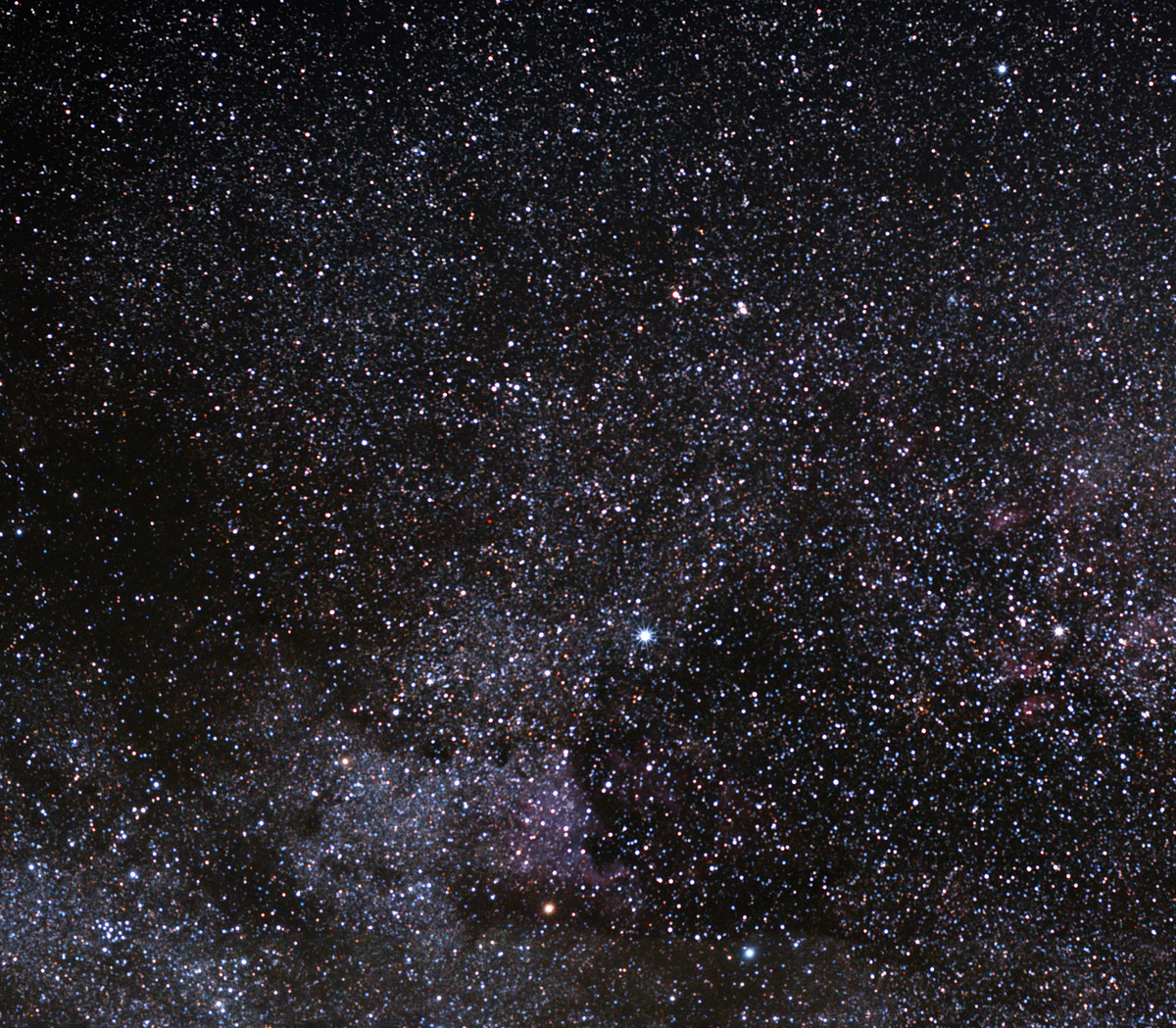 This morning you woke up, got yourself through the morning routine and somehow managed to haul yourself to work. You did this yesterday and you will do it again tomorrow. The days come and they go. You do your best. You try not to hurt anyone, try to be helpful. But sometimes — just sometimes — the fog of real and imagined urgencies parts. Staring across the abyss of your own brief time on this world, you wonder, "Does any of this matter? Does any of it matter at all?"

I had that experience last week and I am still reeling.

I was attending the American Astronomical Society's summer meeting, held this year in Anchorage. Being in Alaska this time of year, with its in-your-face mountain ranges and near continuous daylight, is enough to yank anyone out of the day-to-day. But the 21 hours of daylight and the brief bear encounter (hello Mr. Enormous Black Bear) were not the keys that opened the door to the abyss for me.

It was an image, a single picture.

I was sitting in a morning session on the Kepler mission. Kepler is a small space telescope designed to find exo-planets, alien worlds orbiting other stars. Kepler has been very good at its job.

Kepler discovers new planets by staring at stars and looking for tiny periodic decreases in their brightness. Dips in starlight can occur for many reasons but if they happen in just the right way, over and over again, then astronomers know they've observed a planetary transit, a planet passing across the face of its host sun (yes, this is exactly what happened with Venus a few weeks ago).

Once the existence of the planet is established, astronomers can extract a cornucopia of information from the data. Using Kepler (and other observations) astronomers can nail down the size of the planet's orbit, its mass, its temperature and, sometimes, its density. The light that glances through its gaseous perimeter can even be used to determine the characteristics of the alien planet's atmosphere.

More than 72 new worlds have been discovered by Kepler, with a few thousand more considered candidates. Many of these are gas giants like Jupiter. Some are so-called Super-Earths, planets a few times larger than our own. Astronomers are not yet sure of their structure. Some may exist as wholly liquid water-worlds (that is why density measurements matter). A number of the Kepler discoveries are true planetary systems, with up to 6 worlds orbiting the host star. But most important of all, a few of Kepler worlds are the size of Earth. They are, most likely, rocky worlds like our own.

The talks on Kepler were delightful and I drank in all the new science like a thirsty kid on a hot summer day. But none of what I learned pushed me out of my comfort zone and on to the ledge of my own mortality. Then, innocently, one of the speakers flashed an image related to the Kepler search strategy.

It showed the region of sky where Kepler would be looking for its planets. The probability of a planet and star lining up just right for us to see a transit is pretty low (just 0.5% for system like the Earth and Sun). That means Kepler has to stare at a lot of stars for a long time. To accomplish this the team keeps the telescope pointed at just one region of sky in the constellation Cygnus.

That patch night is not very big. Your hand at the end of your outstretched arm held up against the sky pretty much covers it. The speaker also showed an image of the galaxy and how much of it Kepler would be able to explore. It was a tiny wedge set against a vast galactic disk of stars and dust.

That is what did it to me.

Those images catapulted me out of the room, out of the meeting, out of the day. It felt as if the floor of all my routine concerns dropped out from under me: the bills I forgot to pay before I left; the car brakes that need fixing when I get back; my relationship with my cousins; my concerns about the election; my concerns about the cough that is taking too long to go away; all of it just deflated against one single and inescapable fact.

In a small patch of sky, in a small wedge of space, there are worlds out there right now. There are, most likely many thousands of them. These are places just like here, places where you can stand and look around. These are places with landscapes. Many of them are barren and lifeless, but some may show the colors that only a biosphere can create. Either way, they exist right now as I write these words.

I was reeling and shaken to the core. For that one moment all the meaning and concern I schlep from one day to the next evaporated before my small place in this very big galaxy.

It was dizzying and it was delightful. To be human is to suffer great and small. Even given all our blessings, we can still find ways to fill the day with urgent concerns. And when great suffering falls to us — health, economic, family — our horizons constrict to darkness. Thus, for me, anytime I can be lifted from the crushing sense that this is all there is, it's a good thing. Anytime I can be reminded that there is more, so much more, than this mortal coil, it feels like a good thing.

One doesn't have to search the Kepler archive to find that feeling. It can arrive in the form of art, poetry, your kids laughter or just looking up and out. I hope you get a moment to do that today.

May you have a moment without meaning.