Accessibility links
Voyage To The Center Of A Black Hole : 13.7: Cosmos And Culture What happens inside a black hole? Do the laws of Nature go haywire? A new NASA mission may shed some light into Nature's most enigmatic objects. 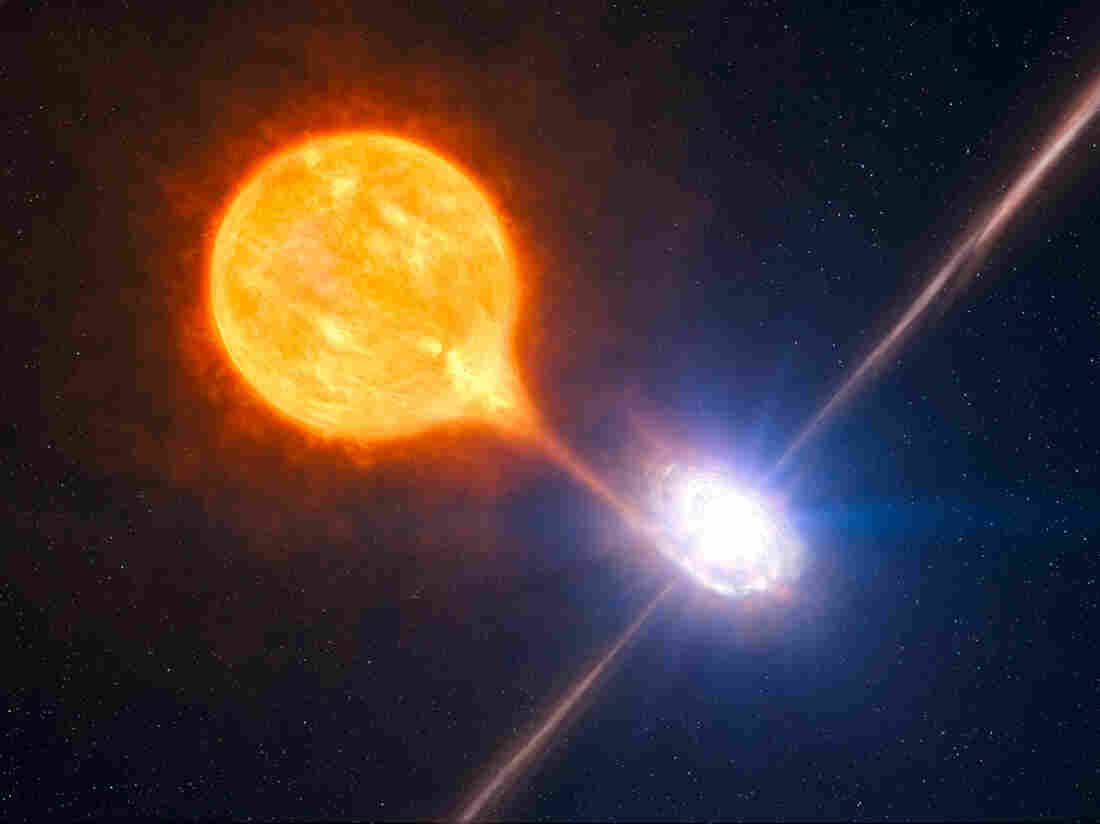 A black hole and its massive pair of jets is seen in association with a growing microquasar in this artist's impression based on multiple sources of telescope data. L. Calçada/M.Kornmesser/ESO hide caption 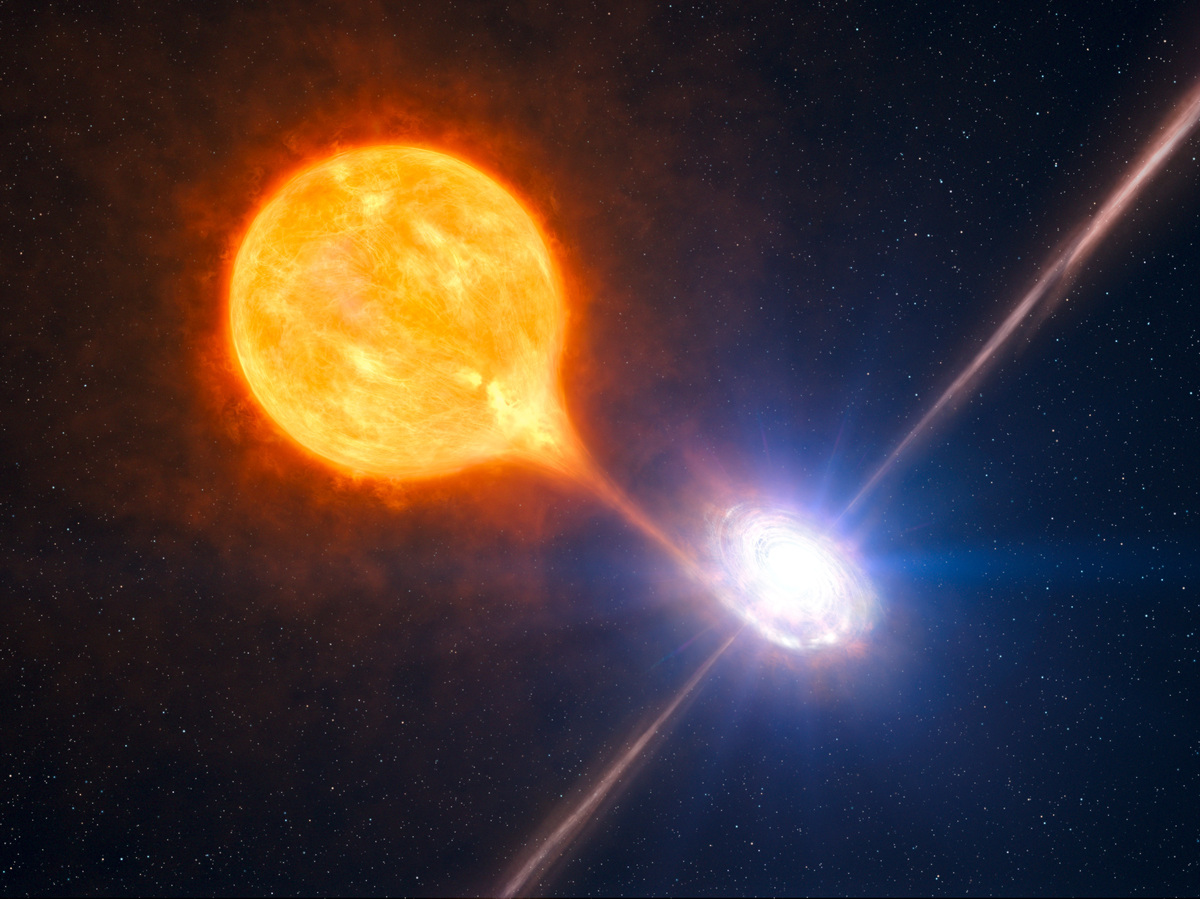 A black hole and its massive pair of jets is seen in association with a growing microquasar in this artist's impression based on multiple sources of telescope data.

Who doesn't wonder what happens when someone falls into a black hole? I'm sure some of you, dear readers, have lost many hours of sleep on this one. Especially now that we know that there is a black hole at the center of most of the hundreds of billions of galaxies out there, including a behemoth in our own Milky Way with a mass of about 4 million suns.

On June 13th, a powerful X-ray telescope (NuSTAR for Nuclear Spectroscopic Telescope Array) was launched into orbit to take a good look at it.

X-rays are produced when highly energetic particles spiral into a black hole and are typical signatures of extreme physical events. Plus, they have the advantage of passing through most of the obscuring gas clouds that surrounds these enigmatic objects.

According to Einstein's general theory of relativity, gravity can be explained as a result of the curvature of space (and time) near a massive object: the more massive the object, the more curved the space around it and the more things are accelerated towards it. Just as every runner knows that the steeper the hill the harder the climb, the more curved the space, the harder it is to escape from it. A black hole is the extreme limit, an object that bends space so dramatically that nothing can escape from it, not even light.

So, to "see" a black hole we must look at what the matter around it is doing.

To Einstein and to most physicists, black holes present a serious challenge. According to theory, the most common black holes are born from dying stars that collapse onto themselves like shrinking balloons. The problem is that as the shrinking continues, gravity grows stronger. And since there is nothing to stop the shrinking (as is the case when white dwarfs and neutrons stars are born from the arrested collapse of not-so-heavy stars), at the center of the collapsing star gravity becomes infinitely strong: a "singularity" is born, a place where the laws of physics break down.

The singularity is surrounded by an "event horizon," the limiting sphere separating the weirdness of a black hole from the normalcy outside: if you fall past the event horizon, you will never get out. You will drift to the center, toward the singularity, where you will be crushed into oblivion. But not to worry, since before reaching the center you would have been stretched like spaghetti and torn to pieces. (The amount of drama depends on the mass of the black hole.)

Now, Einstein never liked when laws break down and science loses its grasp on physical reality. So, in 1935 he wrote a paper with Nathan Rosen where they suggested that possibly the center of a black hole is a bridge (or tunnel) to another place in the Universe that ends in a "white hole": if the black hole sucks matter in, a white hole spits it out. (The bridge could also connect to separate universes, but we will stay in only one today.) In a sense, a white hole is like a mini Big Bang, a point in space where matter comes from. These "wormholes," as the Einstein-Rosen bridges became known, excited the minds of countless sci-fi writers: maybe there are tunnels out there in space that allow for faster-than-light travel, a no-no according to Einstein's younger relativity theory, the "Special" one.

The problem with wormholes, apart from the lack of evidence for white holes, is that we don't have the kind of energy needed to keep its two mouths open. In fact, this feat calls for a different kind of matter altogether and, at least for now, remains in the sci-fi realm.

We can, however, always ask what is going on inside a black hole. Surely, the existence of a singularity is telling us that the classical treatment of gravity based on Einstein's theory breaks down near the center of a black hole. We expect that near the singularity energies will be so high that quantum effects will change the description of gravity and what it means. Quite possibly, the singularity doesn't really exist, and space bubbles into some kind of quantum soup there.

But quantum effects can play other tricks on black holes. In fact, they can make black holes slowly disappear, or "evaporate," as Stephen Hawking showed many years ago. If this really happens, we can imagine a black hole slowly shrinking in size until all there is left is the singularity at its center, naked for all to see!

Outraged with the possibility, physicists came up with the "Cosmic Censorship Hypothesis," which essentially states that naked singularities cannot exit: something must happen as the black hole evaporates to make this embarrassing point where nature doesn't make sense go away.

If black holes do evaporate, would they end with some kind of bang? It's a possibility and some scientists have proposed that ultra-violent short gamma ray bursts could be the last salvo of an evaporating black hole.

Whatever happens to an evaporating black hole, it's quite amazing that these objects were invented before they were discovered. That solutions to complicated mathematical equations would predict the existence of such strange objects is nothing short of wonderful, an almost magical marriage between the human imagination and the cosmos at large.

Nature seems to be teasing us to dare: "push your theories to the limit and beyond. You may be surprised to find that even your wildest ideas are right; and that there is always much more out there, just waiting for new flights of fancy."