Accessibility links
Cosmic Rays: 100 Years Of Mystery : 13.7: Cosmos And Culture As scientists celebrate 100 years since the discovery of cosmic rays, many mysteries remain. Cosmic rays and giant black holes at the center of galaxies may constitute a dramatic cosmic link. 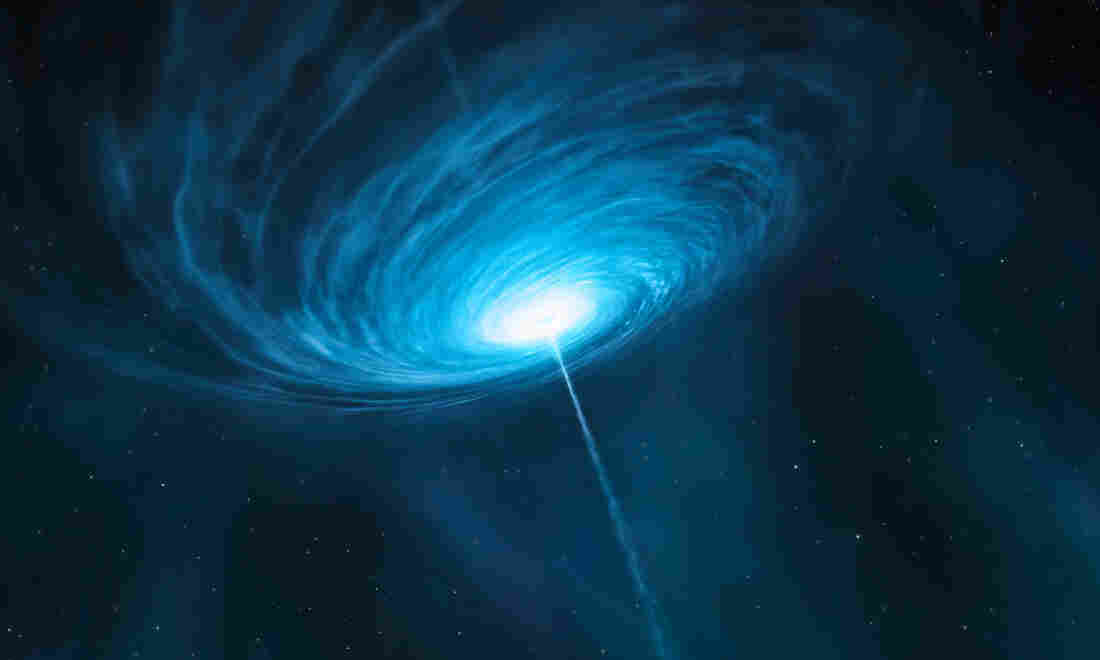 An artist's impression of the quasar 3C 279, about five billion light years away. This quasar contains a black hole with a mass about one billion times that of the sun. M. Kornmesser/ESO hide caption 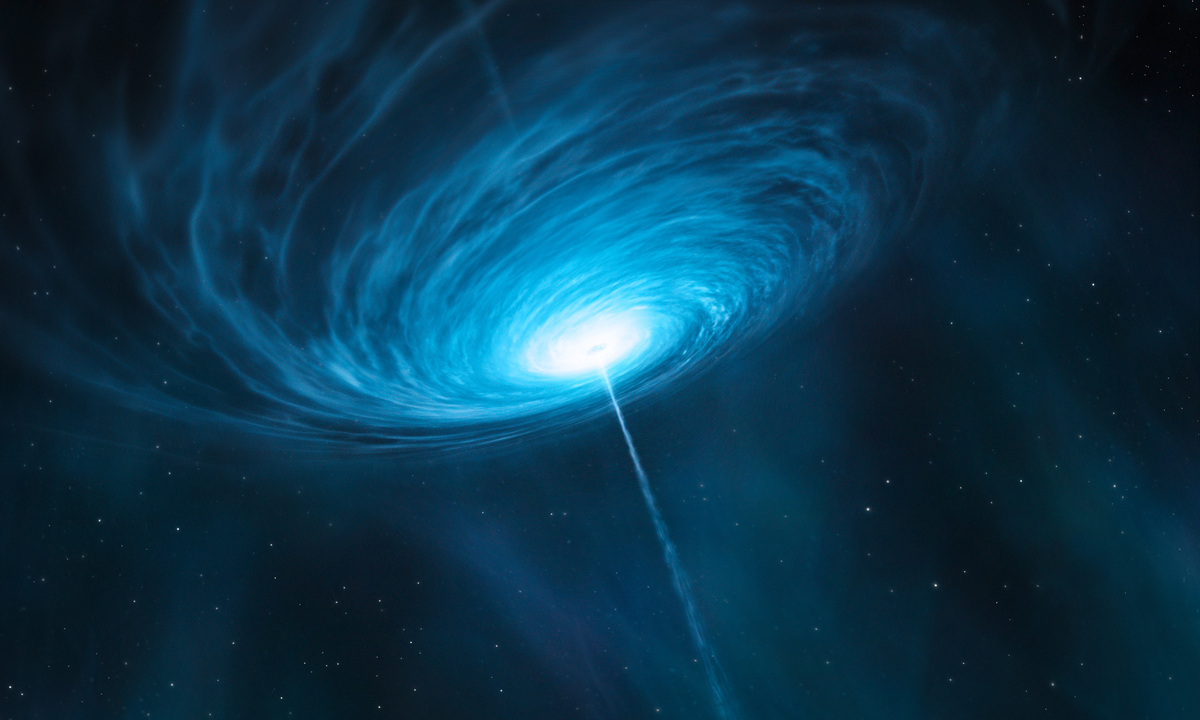 An artist's impression of the quasar 3C 279, about five billion light years away. This quasar contains a black hole with a mass about one billion times that of the sun.

This August, physicists are celebrating the 100th anniversary of the discovery of cosmic rays, showers of particles raining down on us from outer space. Although much has been learned about the nature and composition of cosmic rays, many puzzling questions remain. No one knows what physical processes could possibly accelerate particles to energies millions of times higher than those reached at CERN's Large Hadron Collider, where the Higgs was recently discovered.

Apart from their mysterious acceleration mechanism, cosmic rays also have a very practical impact on our world, producing about 13 percent of the natural background radiation in our environment. Airline crews are exposed to roughly twice as much cosmic-ray radiation, astronauts to even more. They also have enough energy to interfere with and damage computer equipment, causing taking a toll on memory devices and CPUs. In the 1990s, a study from IBM estimated that computers experience about one cosmic-ray-induced error per 256 megabytes of RAM per month.

And then there is the issue of space travel: radiation exposure remains a serious barrier to longer manned expeditions.

In August 1912, the Austrian physicist Victor Hess flew in a balloon to altitudes of 5.3 km, measuring the flux of particles in the sky. The expectation was that the flux would decrease with altitude, precisely the opposite of what Hess found. The shocking conclusion was that particles were raining down on Earth from space.

In the following decades, cosmic rays became a great tool for exploring the fundamental building blocks of matter. Slowly, their composition was decoded: about 90 percent are protons, 9 percent are alpha particles (the nuclei of helium atoms) and 1 percent are electrons. A small fraction comes from nuclei produced soon after the Big Bang, most importantly lithium. When particles hit the upper atmosphere, they collide with molecules of nitrogen and oxygen, creating a true "cosmic ray shower" of other particles, a spectacular illustration of E=mc2, as the energy of motion of the incoming particles are transmuted into new particles with varying masses and energies.

Although the mechanisms for producing most cosmic rays are well-understood, little is known of what causes the very high energy ones. High energies imply that the culprit or culprits must be dramatic astrophysical events. Two candidates have been proposed: gigantic black holes that live at the center of galaxies (including our own Milky Way, which sports a hulking monster of about four million solar masses) or gamma ray bursts, the brightest electromagnetic events known to occur in the universe. Possible candidates for gamma ray bursts are the rapid collapse of a star as it becomes a neutron star or a black hole during a supernova event, or the collision of two neutron stars.

Recently, an experiment run by the University of Wisconsin, IceCube (South Pole Neutrino Observatory), has presented strong evidence against gamma ray bursts as the possible mechanism accelerating ultra-high-energy cosmic rays. The theory predicts that supernovae events are accompanied by extensive neutrino production. After surveying some 300 gamma-ray bursts, IceCube failed to detect a single neutrino. On the other hand, another massive experiment, the Pierre Auger Observatory situated in the Mendoza Province in Argentina and with a detection area the size of Rhode Island, has found a strong correlation between the highest-energy cosmic rays and nearby active galactic nuclei, that is, the center of galaxies where massive black holes are actively gobbling up stars and gases.

As we track down the sources of the highest energy cosmic rays and use them to learn about the most dramatic events occurring in the universe, we should celebrate them as bridges between us and the confines of outer space, reminding us of our deep connection with the cosmos.