Accessibility links
The City As Engine: Energy, Entropy And The Triumph Of Disorder : 13.7: Cosmos And Culture The second law of thermodynamics is a kind of warning to cities and civilization. No matter how clever we are, disorder, waste and pollution will always follow from our work organizing societies into cities. 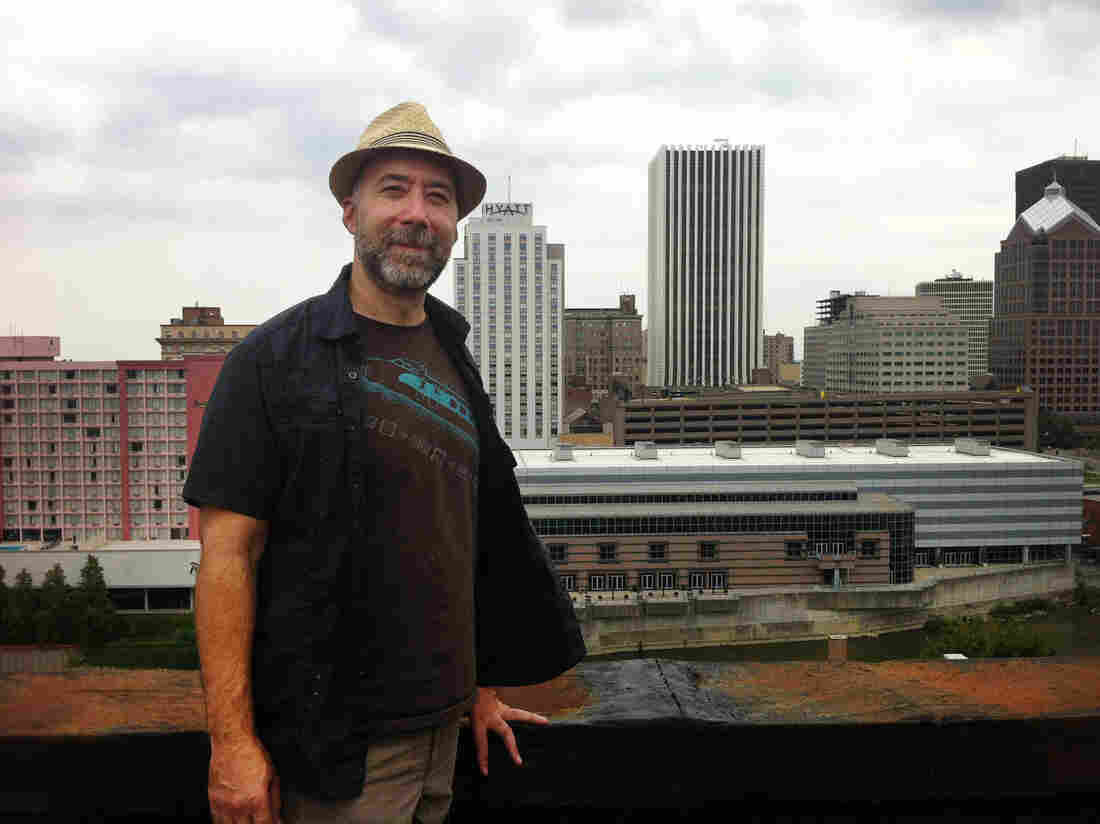 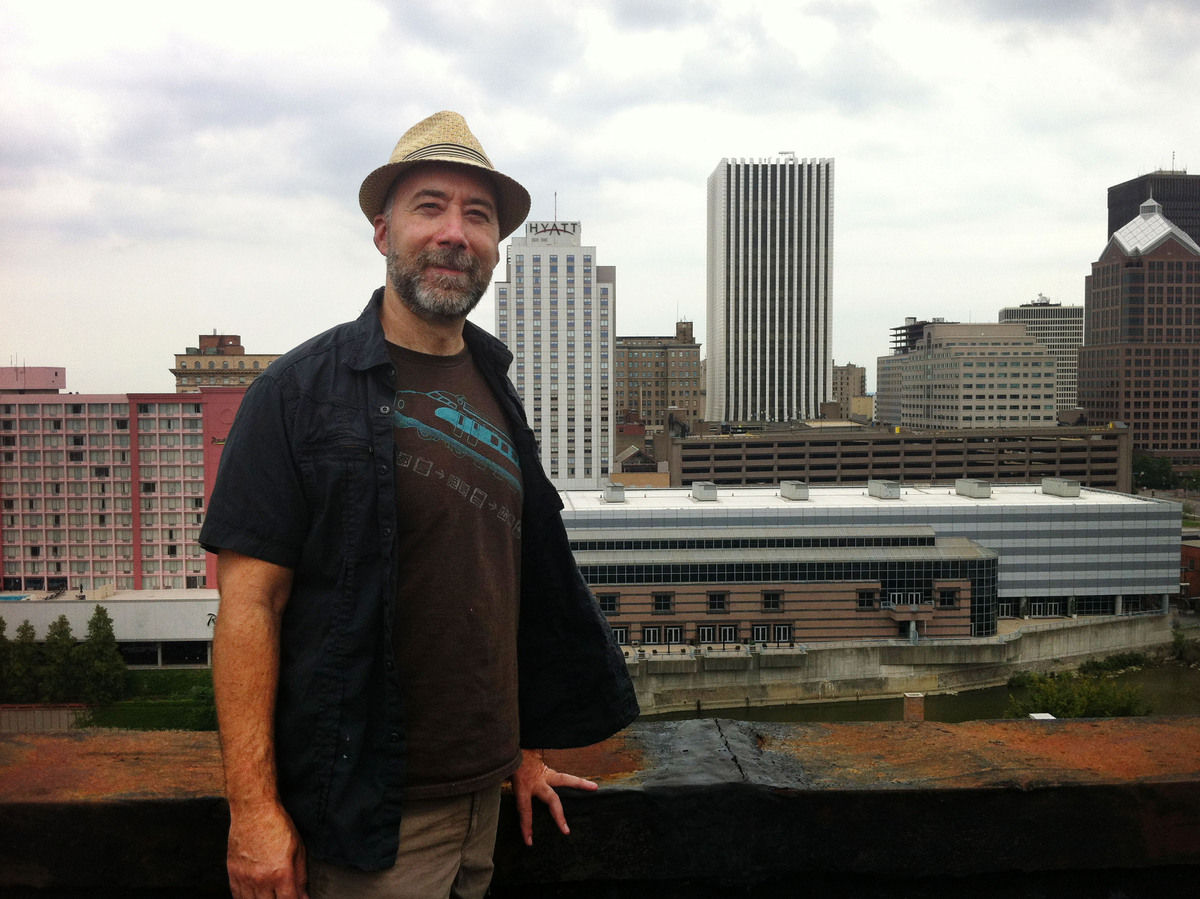 Adam Frank stands atop of the Wilder Building in Rochester, N.Y.

Cities may be the defining element of human civilization.

The path from hunter-gatherers in the Paleolithic era 25,000 years ago to the high-tech, high-wonder jumble we inhabit today runs straight through cities. In traveling that path, our construction of cities has always been a dance with physics. In some cases, that physics was explicitly understood; in others, its manifestation was only recognized in hindsight.

As our cities have become more complex the physics embodying their behavior and organization has also become more nuanced, subtle and profound.

About a month ago I walked down the streets of my hometown of Rochester, N.Y., to discuss a street-level view of physics and cities. From the street a city is all about the physics of "simple" machines: bikes, buses, streetcars and the plumbing of fire hydrants. Once you get up high enough, however, your physics-colored glasses lets you see cities in a whole new way.

Instead of just basic machines, the city becomes a vast interconnected system designed for turning energy into work. Seen through that lens, cities are really giant heat engines, and that makes them creatures subject to one of the most profound principles in all of physics: the omnipresent Second Law of Thermodynamics.

Before we hit the second law, it would be good to remember the first law, which tells us energy is always conserved.

Climb a flight of stairs and the chemical energy in your morning's oatmeal is turned into your muscles' energy of motion. The oatmeal's chemical energy originated, of course, in sunlight via photons streaming across space. Taken as a whole, energy is neither gained or lost. It is only transformed from one form to another.

In a city you see this every day, all day. Electricity runs through wires and transforms into the movement of a fan or the illumination flowing from a streetlight. The first law is relatively easy to understand, and it makes a kind of innate sense to us.

The second law is something else entirely. It speaks to the consequences of those energy transformations mandated by the first law. There are rules for how energy is transformed — rules and limits. Most importantl the second law tells us that anytime energy is used to do useful work — like lift an I-beam to the top of a new building — then some of that energy must end up as waste, garbage, pollution or just plain crap.

Useful work creates unusable waste, always and forever. That is the law, the second law. That universal link between energy, work and waste and is what makes the second law such a profound, universal principle.

Use a load of coal to drive a steam-powered locomotive and some of the coal's energy ends up heating the locomotive itself, leading to wear, tear and eventual decay. Physicists call this waste entropy, but what it really means is disorder.

Entropy is a beautiful word and an even more beautiful idea. Systems, like a box of gas, can be in many states, with some more ordered than others. All the atoms in the box could be neatly packed into a corner. That is a high order and low entropy state. The atoms could also be bouncing around everywhere in the box. That's a low order and high entropy state.

What does this have to do with the view of cities from the roof? On the roof you can literally hear the city acting like a giant engine. The sounds of traffic, music, construction and sirens all merge together into a cacophony, into a clamor, into noise. But what is noise in this case? It's an acoustic measure of the second law at work. It's the city's entropy made audible!

Every moment of every day, vast quantities of energy stream into the city through all that plumbing we saw on the street. The city then uses that energy to do work, to organize itself into vast architectures of order. But the second law will not let the story end there. Waste, pollution and disorder must follow.

There is a word that applies to the sound of cities which almost never gets applied to nature: "Din." The din of cities heard on the rooftop as a rising wall of noise is a testament to the true nature of cities as engines of organization and dynamos of disorder.

The first time I became aware of this din of acoustic entropy, I was sitting across from Manhattan on the cliffs of Weehawken, N.J. It was night and the great city was blazing from horizon to horizon. Its low rumble of noise flowed like a breeze blown at me from a mile away across the dark river. There it was, the second law made real in sound and light. The great might of that city — its vast converging streams of energy, creating a singular nexus of activity — was no more stunning than the visceral realization that it was also radiating disorder like a mad star.

The second law is a thing of great beauty, because it is just as true for a box of atoms as it is for a star, or a single cell or a great city. The dynamic balance of energy and entropy is a universal law of systems in whatever form they take.

But it has its darker side, too. The second law is a kind of warning to cities and civilization. No matter how clever we are, there will always be disorder, waste and pollution following in the wake of our work organizing societies into cities. There is another way of putting the second law that states the entropy of the universe always increases. So the work we do to create and maintain cities means we are also raising the level of disorder, waste and pollution for the planet as a whole.

We live at a moment when cities are poised to become the dominant mode of human habitation on the planet. But we don't yet know if such a mode can be made sustainable for more than a century or two. Coming to grips with that question can only mean coming to understand the physics of cities — the physics of thermodynamics and its ever-present second law.