Accessibility links
Chimpanzee Politics: Election-Year Lessons On Power And Reconciliation : 13.7: Cosmos And Culture Can those of us caught in the red-blue divide learn something from political animals? At the 30-year anniversary of primatologist Frans de Waal's Chimpanzee Politics, commentator Barbara J. King looks back at the book and applies its messages to the current election season. 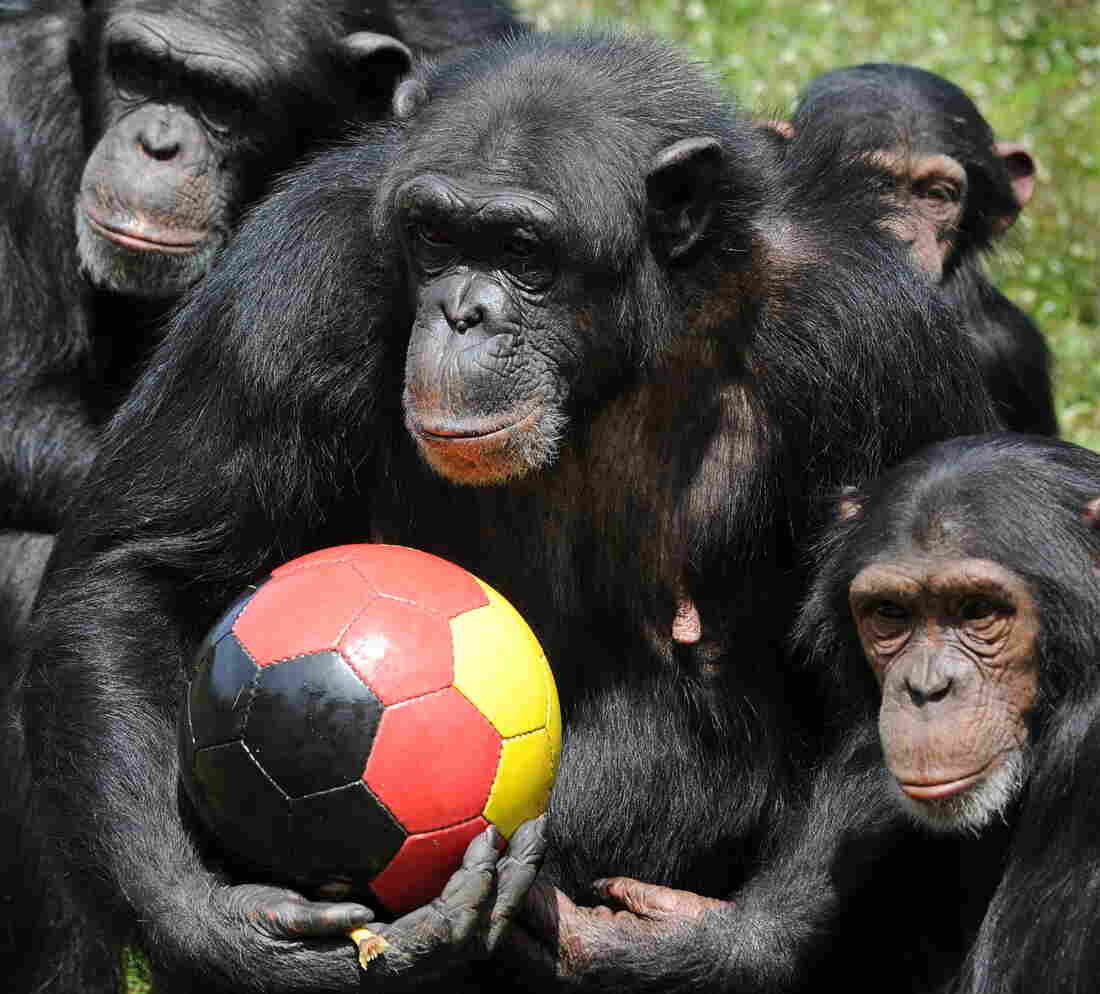 Chimpanzees are political animals who understand shared power and the benefits that flow from reconciliation. Peter Steffen/AFP/Getty Images hide caption 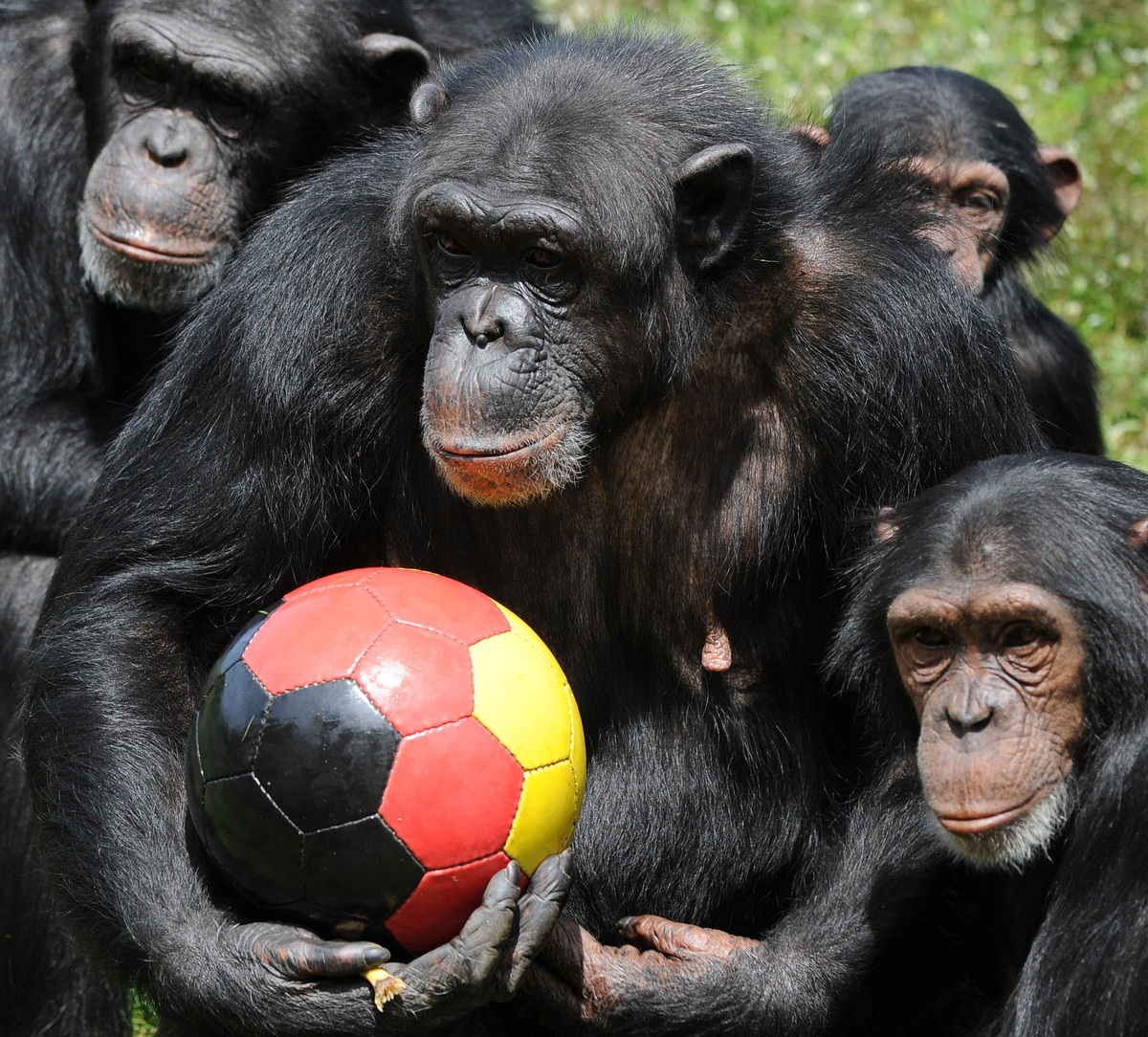 Chimpanzees are political animals who understand shared power and the benefits that flow from reconciliation.

Thirty years ago, the primatologist Frans de Waal published Chimpanzee Politics, a wonderful bombshell of a book that revealed the depth of chimpanzees' social complexity. Based on long-term observations at Arnhem Zoo in the Netherlands, many of de Waal's descriptions match comfortably with what chimpanzees in the wild have since been observed to do.

Status-striving, alliances and coalitions, acts of deception and moments of reconciliation are all found among the Arnhem chimpanzees. Sound familiar? De Waal concluded that human political activity "seems to be a part of an evolutionary heritage we share with our close relatives."

With a little more than a week to go in Barack Obama and Mitt Romney's battle for the American presidency, it's an apt time to revisit the book's message. No, I won't be comparing Obama and Romney to male chimpanzee rivals, using nonverbal displays in their contest for dominance. Instead, I want to use de Waal's insights as a springboard to reflect on what happens after the election, among the rest of us.

A chimpanzee leader, de Waal wrote in the book, "cannot impose his leadership on the group single-handedly. His position is granted him, in part, by the other chimpanzees." Further, chimpanzee political conflict can result in greater social bonding than had existed before. "After a conflict," he noted, "the opponents are attracted to each other like magnets," and may embrace each other or otherwise interact positively.

Chimpanzees, in other words, are political animals who understand shared power and the benefits that flow from reconciliation.

At Arnhem, two older males called Yeroen and Luit fell into what de Waal called a "protracted series of impressive displays and conflicts." Yet reconciliation was often a part of the picture, too. Following an altercation, "If neither of them was prepared to make the first reconciliatory move — by looking at the other, holding out a hand, panting in a friendly way or simply going up to his opponent — the two would continue to sit tensely opposite each other and it was frequently a third party who helped them out of the impasse."

By terming this third-party behavior mediation, de Waal underscored that it is a purposeful act — one undertaken, incidentally, by adult females.

I observed apes in captivity for many years and know that I'm cherry-picking to a certain extent here. For one thing, we're as closely related to bonobos as to chimpanzees. Bonobos are female-dominant or co-dominant, rather than male-dominant. My choice of chimpanzees here is not intended as any model of how things should be regarding sex, gender and political leadership in our society.

For another thing, chimpanzees may be violent. In fact, Luit was killed in a brutal manner, apparently via a coalition between Yeroen and another male called Nikkie. Status striving can end quite badly in chimpanzees.

But it doesn't always end that way. Our species has evolved a more elaborate brain and a more elaborate sense of empathy compared to our ape kin. We can build on the ape, indeed the mammalian, evolutionary bedrock of empathy that de Waal emphasizes in his later work (see also Eric Michael Johnson's interview with de Waal). Specifically, we can understand that whatever anxiety and fear we may feel about this election, supporters of the other candidate feel the same. Each of us can listen more, and drop the coarse epithets about the candidate we don't support. If we win, we can refuse to gloat.

The red-blue divide in the U.S. is a deep one, admittedly, with frequent demonizing of, and raging at, those who don't share our political perspective. Tension, at the very least, is the order of the day, and not only at the town, state or national level. Maybe you recognize your family in mine: five of us went out for a birthday dinner last weekend and avoided the topic of the election completely. Three of us support one candidate, and two the other, and previous discussions about this political split hadn't gone so well.

I did appreciate it when my 85-year-old mother said to me, privately, "I'm really afraid about the outcome of this election." That was code, of course. She meant she is afraid my candidate and not hers will prevail at the polls. Instantly I felt what she meant because I could have uttered that same sentence to her. That was our point of connection, and a uniquely human one.

Sure, I hope, pretty fiercely, that my candidate and his supporters are the ones celebrating on election night. But on November 7th? That's when winners and losers alike can reach out a primate hand in empathy and reconciliation.