Accessibility links
Would You Vote For An Atheist? Tell The Truth : 13.7: Cosmos And Culture Many demographic groups remain underrepresented in high-level government positions, including atheists — at least those out of the theistic closet. Commentator Tania Lombrozo wonders why atheists appear to be distrusted by the electorate.

Would You Vote For An Atheist? Tell The Truth

Would You Vote For An Atheist? Tell The Truth 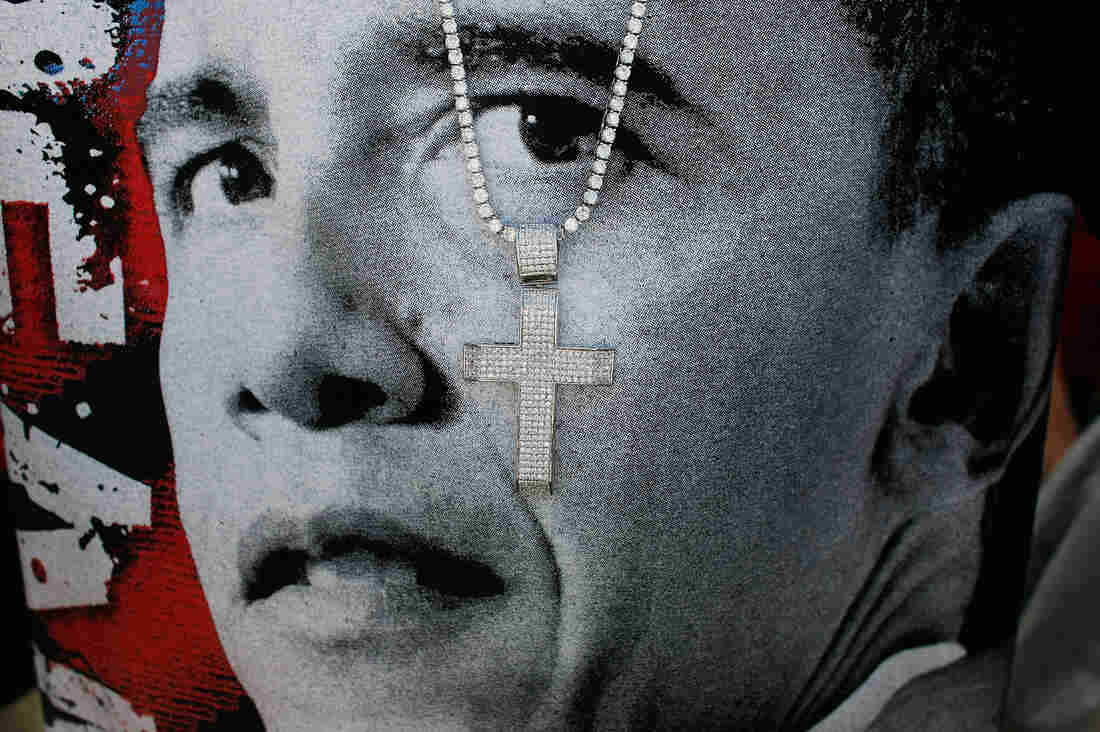 A cross hangs in front of a T-shirt printed with Barack Obama's face at a 2008 campaign event in Las Vegas. Joe Raedle/Getty Images hide caption 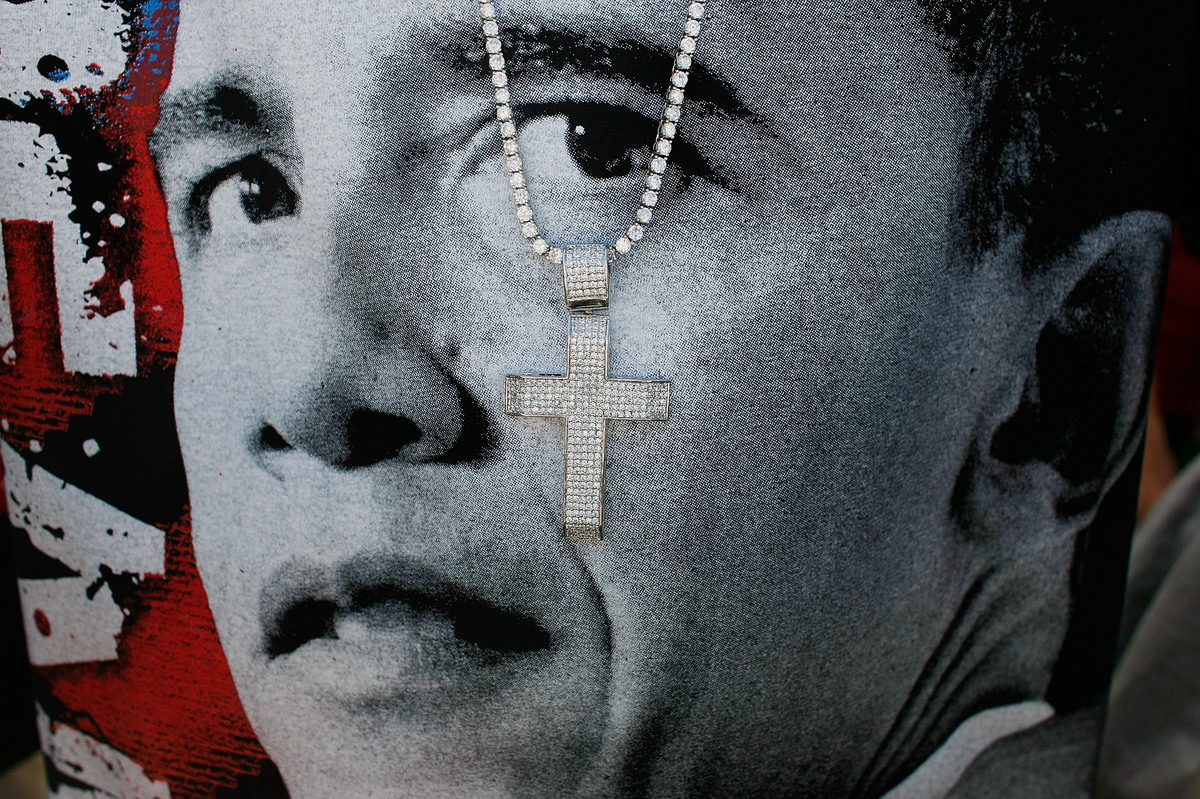 A cross hangs in front of a T-shirt printed with Barack Obama's face at a 2008 campaign event in Las Vegas.

Last week's election boasted many firsts: Tammy Baldwin was elected as the first openly gay senator, Tulsi Gabbard as the country's first Hindu member of Congress and Barack Obama will continue as the first black president of the United States. But some demographic groups remain underrepresented in high-level government positions. I'm thinking about atheists — at least those out of the theistic closet.

According to the Huffington Post, Kyrsten Sinema will replace Pete Stark as the only atheist in Congress. But an article in Jezebel identifying her as such led to the following "clarification" from her campaign: that Sinema "believes the terms non-theist, atheist or non-believer are not befitting of her life's work or personal character. She does not identify as any of those." So even a non-traditional candidate, like the openly bi-sexual Sinema, is choosing to distance herself from the A-word.

Why are atheists so conspicuously absent from our nation's elected positions of power?

A 2007 poll of American adults found that only 45 percent would vote for a "generally well-qualified" presidential candidate nominated by their party who happened to be an atheist. The numbers were considerably more favorable for hypothetical candidates who happened to be black (94 percent), Jewish (92 percent), women (88 percent), Hispanic (87 percent), Mormon (72 percent) or homosexual (55 percent).

In another national survey, respondents considered how much members of various groups agreed with their "vision of American society." A whopping 39.6 percent indicated that atheists agreed with their vision "not at all," eschewing moderate options like "mostly" and "somewhat." Respondents chose "not at all" less often for every other group considered, including Muslims (26.3 percent), homosexuals (22.6 percent), conservative Christians (13.5 percent), Hispanics (7.6 percent), Jews (7.4 percent) and African Americans (4.6 percent). When it came to welcoming a potential son- or daughter-in-law, atheists faired even worse: almost half of respondents (47.6 percent) would disapprove if their child wanted to marry an atheist.

According to researchers Gervais, Shariff and Norenzayan, the driving factor behind anti-atheist prejudice is distrust. Many people see religion as the foundation for morality, with supernatural surveillance and the promise (or threat) of an afterlife as crucial mechanisms for keeping people in line. Without belief in God, the reasoning goes, what's to keep someone from lying, stealing, cheating and general chicanery?

In a set of clever experiments, the researchers found that atheists were trusted less than the average person, less even than gay men (who are themselves distrusted relative to "people in general"). Atheists were more strongly associated with dishonest behavior than Christians, Muslims, homosexuals, Jews or feminists. Only one tested category didn't differ significantly from atheists when it came to distrust: rapists.

Are atheists, in fact, less moral? Most philosophers agree that religion isn't necessary (and, perhaps, isn't even sufficient) as a foundation for morality, a perspective advocated in a number of recent books, such as Greg Epstein's Good Without God, and in a prize-winning op-ed by philosopher Louise Antony. Some argue that atheists are more ethical, not less. Regardless of the argument, the empirical evidence isn't entirely clear.

Priming people to think about religious concepts like "God" and "divine" can make them act more altruistically. But priming people to consider secular institutions like "civic" and "jury" has the same effect.

Additional findings tell an equally nuanced story. But when it really comes down to deciding whom to trust, people tend to go with their gut — not a careful assessment of the peer-reviewed literature in philosophy and science.

The link between atheism and distrust goes some way toward explaining why we see so few atheists in important political offices, where public trust is essential to successful election. But I'm left with a few questions. First, political positions are embedded within the very secular institutions that seem to provide an alternative to divine authority. In fact, reminders of secular authority, such as the police, reduce people's distrust of atheists. So why isn't secular government a stronghold for the non-theistic?

Second, why is atheist prejudice in politics — at least on the face of it — greater in the U.S. than in peer nations? Australia's Prime Minister, Julia Gillard, openly denies belief in God (and is most certainly not a Christian male). It may be relevant that her position is appointed by the elected party, not elected by the public or by an electoral college. Atheism is also more common in Australia than in the U.S. (10 percent versus 5 percent). Research suggests that the perceived prevalence of atheism is linked to lower anti-atheist prejudice. But these facts simply push the question back: why did the elected party feel confident appointing a non-theist and why the difference in atheist prevalence?

Finally, is anti-atheist prejudice likely to go away anytime soon? Unlike other "theistic" identities, such as Christianity or Islam, atheists are defined by what they don't believe, not by what they do. Even the so-called New Atheists, who tie atheism to a strong agenda, position themselves as first and foremost against religion, not for a particular brand of naturalism.

Gaining trust often involves disclosure — revealing something about who you are, not just who you aren't. While I fully understand why a political figure like Kyrsten Sinema might shy away from labels or a public declaration of her personal beliefs, this kind of disclosure might be precisely what's required for people to start to believe in atheists.