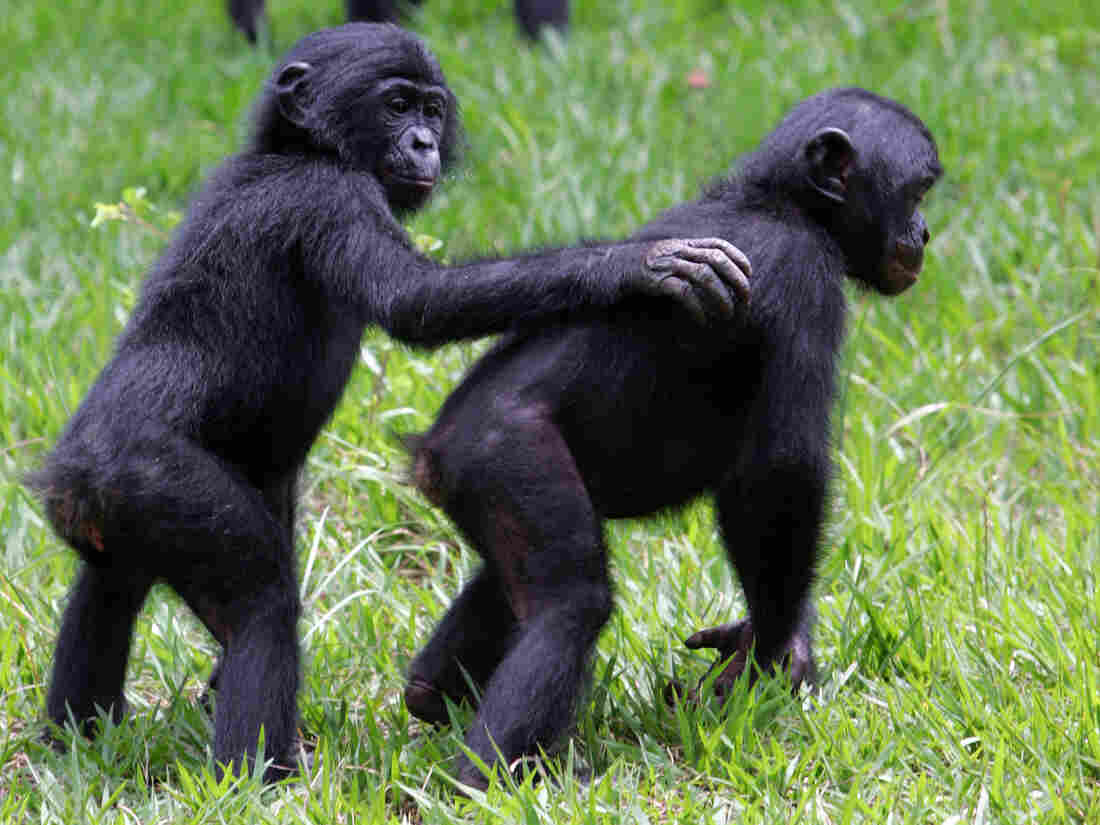 Bonobos at the Lola ya Bonobo sanctuary near Kinshasa in the Democratic Republic of Congo in 2006. Issouf Sanogo/AFP/Getty Images hide caption 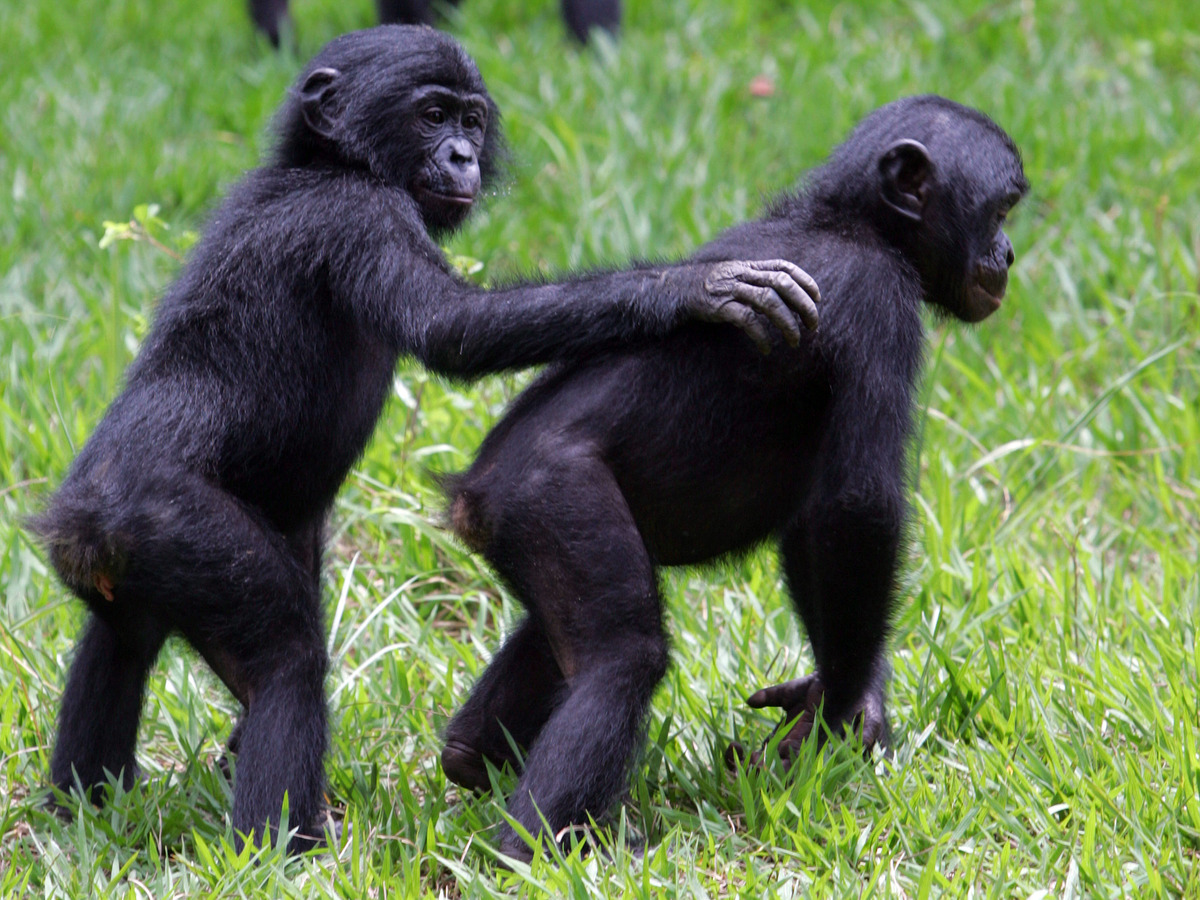 Bonobos at the Lola ya Bonobo sanctuary near Kinshasa in the Democratic Republic of Congo in 2006.

In a book coming out next week called The Bonobo and the Atheist, primatologist Frans de Waal argues that morality is built into our species. Rather than coming to us top-down from God, or any other external source, morality for de Waal springs bottom-up from our emotions and our day-to-day social interactions, which themselves evolved from foundations in animal societies.

For 30 years, de Waal has authored books about apes and monkey that open our eyes to the bottom-up origins of our human behaviors, ranging from politics to empathy. In this, his 10th volume, he extends that perspective by writing, "It wasn't God who introduced us to morality; rather, it was the other way around. God was put into place to help us live the way we felt we ought to." 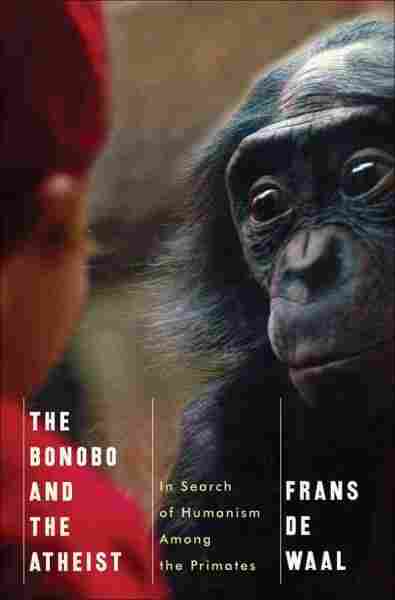 The Bonobo and the Atheist

In Search of Humanism Among the Primates

"The way we felt we ought to" has a long evolutionary history, so that de Waal's thesis depends crucially on numerous and convincing examples from our closest living relatives.

Azalea, a trisomic rhesus macaque (trisomic = born with three copies of a certain chromosome), had abnormal motor and social skills, in ways somewhat akin to humans with Down syndrome. Instead of punishing her "incomprehensible blunders," such as threatening the alpha male, the other macaques were accepting and forgiving of her until Azalea's death at age three. Female chimpanzees may confront and shut down an overly aggressive male, sometimes even pulling two adversaries close together for reconciliation, or prying rocks from an aroused males' hands.

In cases like these, animals are feeling empathy, then acting on that feeling with displays of kindness or help, behavior that de Waal calls sympathy. The empathy is purely embodied — literally felt in the body — and part of our evolved biology. "Our brains have been designed to blur the line between self and other," he writes. "It is an ancient neural circuitry that marks every mammal, from mouse to elephant."

Despite the sweeping nature of this last statement, what's great about the book are de Waal's careful distinctions. He's never naïve about animal goodness, as if it were hard-wired: how could he be when he has worked so closely for decades with chimpanzees, a species known for outbursts of brutal violence? De Waal sees the bonobo (of the book's title) as more empathetic than the chimpanzee. Bonobos share food, and even across different groups, enjoy sexy, peaceful and playful relationships. But nowhere is it a gentle natural world that he describes. His focus instead is the utter wrongness of Veneer Theory, the historically popular idea that our morality is "a thin veneer over a cauldron of nasty tendencies."

Further, de Waal doesn't go so far as to equate animal goodness with morality. "I am reluctant to call a chimpanzee a 'moral being'," he writes. "There is little evidence that other animals judge the appropriateness of actions that do not directly affect themselves."

What sets human morality apart, he believes, depends on our greater powers of abstraction, and involves "a move toward universal standards combined with an elaborate system of justification, monitoring, and punishment. At this point, religion comes in."

A scientist and non-believer, de Waal isn't saying here that religion is required for human morality, only that the two have been entwined throughout human history. Since I have wearied of the Richard Dawkins school of religion-bashing, in which belief is equated with dim-wittedness, I can only applaud de Waal's approach, as when he writes, "The enemy of science is not religion. Religion comes in endless shapes and forms ... . The true enemy is the substitution of thought, reflection, and curiosity with dogma."

Do I agree with every word de Waal writes about bottom-up morality? Of course not (I'd be bored if I did). He becomes unnecessarily acerbic about atheism at times, asking as part of his frustration with neo-atheists like Dawkins, "What does atheism have to offer that's worth fighting for?" But surely fighting for the right to be seen as, and treated fairly as, a person who lives morally outside of any religious system is a worthy endeavor.

And when de Waal claims that we humans, like other mammals, "are totally preprogrammed in body and mind" for child-rearing, so that "we barely notice the daily efforts on behalf of our progeny," I want to assign him some primatology homework: Observe human parents for a while, specifically a single mom or single dad with a job and kids, or really any parent with multiple small children at home. (Even raising a single child and with an active helpful partner, believe me, I noticed my efforts on more than one day!) Isn't our helping behavior towards others more impressive when it's effortful rather than easy?

But the heart of de Waal's argument is spot on, both because he puts emotions front and center in his account of human morality and because he explains how that morality emerges out of animal roots.

Shall I conclude by offering some uplifting sentence about how de Waal's outlook gives us all hope for the future? In good conscience, I really can't. As de Waal knows, claims of evolved goodness are no more a blueprint for human behavior going forward than are opposing claims of evolved cruelty and violence.