Accessibility links
The Origin Of The Universe: From Nothing Everything? : 13.7: Cosmos And Culture Can science ever explain the origin of the Universe? Commentator Marcelo Gleiser suggests caution and humility as scientists face this very difficult question.

The Origin Of The Universe: From Nothing Everything?

The Origin Of The Universe: From Nothing Everything? 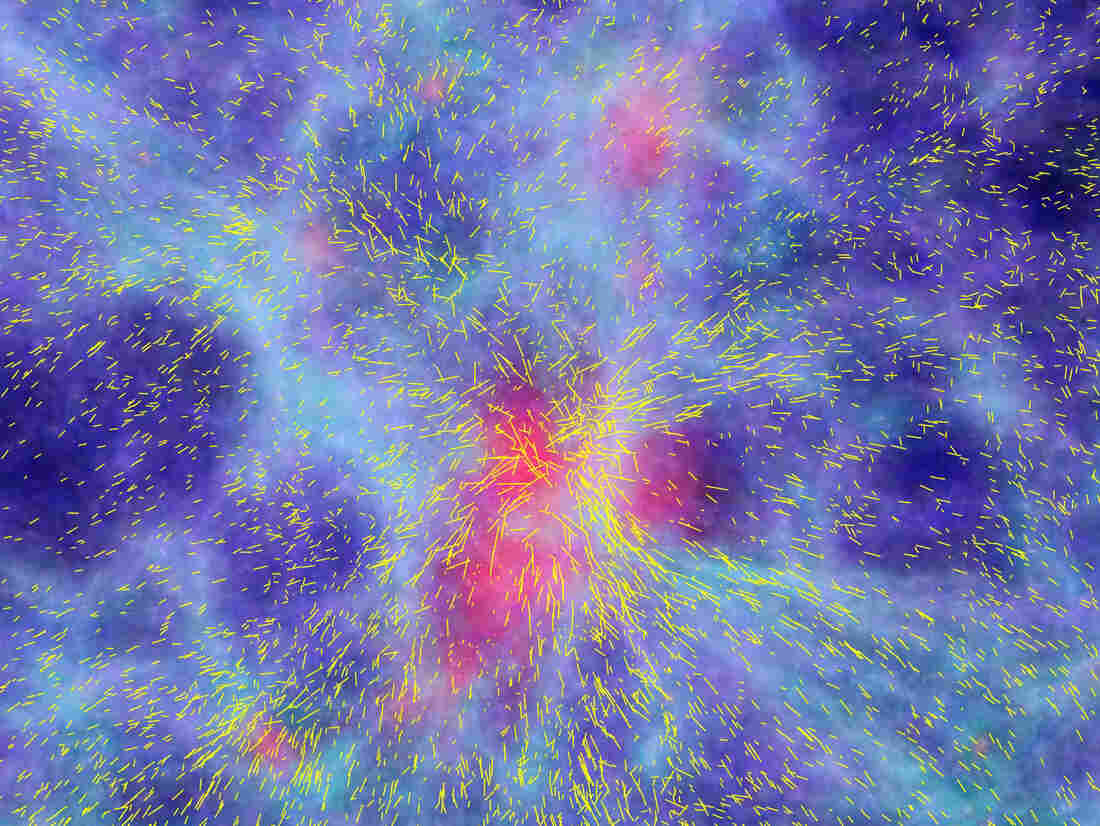 A computer simulation of the formation of large-scale structures in the Universe, showing a patch of 100 million light-years and the resulting coherent motions of galaxies flowing towards the highest mass concentration in the centre. The snapshot refers to an epoch about 10 billion years back in time. Klaus Dolag/VIMOS-VLT Deep Survey/ESO hide caption 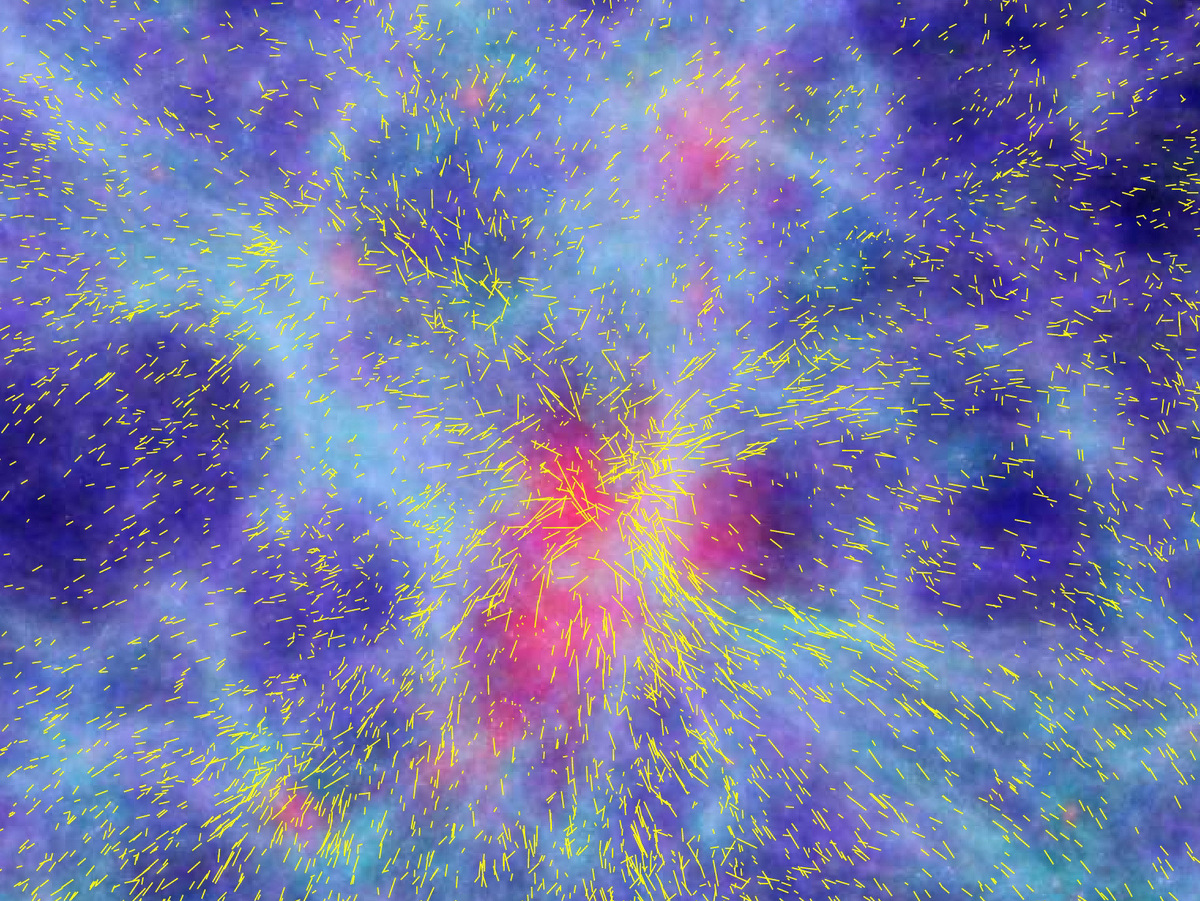 A computer simulation of the formation of large-scale structures in the Universe, showing a patch of 100 million light-years and the resulting coherent motions of galaxies flowing towards the highest mass concentration in the centre. The snapshot refers to an epoch about 10 billion years back in time.

Last week, I started a discussion of what I call "The Three Origins," focusing first on the origin of life. Although we are far from knowing how non-living matter became living organisms on primitive Earth some 3.5 billion years ago (or more), or how to repeat the feat in the laboratory, I consider this the "easiest" of the three questions.

Contrary to the origin of the Universe and the origin of mind, the origin of life is something we can study from the outside in, where we can have an external and objective view of what is going on. Even if, as I have argued, it seems impossible to know exactly how life originated on Earth (unless it could be proven that there is only one pathway from nonlife to life), we can still investigate the biochemical pathways leading to what we may call a living organism. In the case of the cosmos or the mind, things are subtler.

From what we know, all cultures have a creation narrative describing the origin of the world, of how everything came from nothing. As I explored in The Dancing Universe: From Creation Myths to the Big Bang, there are only a small number of possible answers to the origin of the cosmos. All creation myths presuppose the existence of some kind of divine or absolute power capable of creating the world. In the vast majority of cases, the Bible being one example, this absolute power is embodied in God, or a group of gods. In others, the Universe is eternal, without a starting moment in the distant past: it has existed forever and will exist forever. In others still, the cosmos emerges without any divine interference from a primal Nothingness, from an innate tendency to exist. This Nothing can be complete emptiness, a primal egg, or even a struggle between chaos and order. Not every creation myth uses divine intervention or supposes that time started in some moment in the past.

According to modern science, the origin of the universe is part of cosmology. In trying to describe a creation process through scientific language we encounter a serious challenge: if every effect results from a cause, we can follow the chain of causation backwards in time until we arrive at the First Cause. But what caused this cause? Aristotle, for one, used some kind of divine entity to solve this conundrum, the Unmoved Mover, the one that can cause without having been caused. Very convenient, but not scientifically satisfying.

As current astronomical observations resolutely point to a Universe with a beginning in the distant past (according to the latest measurements from the Planck satellite related here last week, at about 13.8 billion years ago), scientific models of the origin of the Universe must face the challenge of explaining or doing away with the problem of the First Cause.

The fundamental question is this: even if a scientific explanation exists, is it an acceptable answer to the question of the origin of the Universe? Defenders of scientism might argue that this is the best that we can do, that it is the only reasonable thing that we can do. Fair enough, if you believe that science should provide an answer to this question and if you are happy with the answers given.

The best answer we have at this point is that the Universe emerged spontaneously from a random quantum fluctuation in some sort of primordial quantum vacuum, the scientific equivalent of "nothing." However, this quantum vacuum is a very loaded nothing: it assumes the whole machinery of quantum field theory, the modern description of how elementary particles of matter interact with one another, was already in operation.

In the quantum realm, even the lowest energy state, the "vacuum," is not empty. Even if the energy of a quantum system is zero, it is never really zero due to the inherent quantum fluctuations about this state. A zero energy quantum state is as impossible as a perfectly still lake, with absolutely no disturbances on its surface. This quantum jitteriness amounts to fluctuations on the value of the energy; if one of these fluctuations is unstable it may grow big, like a soap bubble that blows itself up. The energy remains zero on average because of a clever interplay between the positive energy of matter and the negative energy of attractive gravity. This is the result that physicists like Stephen Hawking, Lawrence Krauss, Mikio Kaku and others speak of when they state that the "universe came out of quantum nothingness," or something to that extent.

The essential question, though, is whether this is indeed a satisfactory explanation to the question of cosmic origins, or simply part of one. The philosopher David Albert raised similar points in a recent review of Lawrence Krauss's book. Here is Krauss's response.

It is obvious that this quantum nothingness is very different from an absolute nothingness. Physicists may shrug this away stating that concepts like absolute nothingness are not scientific and hence have no explanatory value. It is indeed true that there is no such thing as absolute nothingness in science, since the vacuum is pregnant with all sorts of stuff. Any scientific explanation presupposes a whole conceptual structure that is absolutely essential for science to function: energy, space, time, the equations we use, the laws of Nature. Science can't exist without this scaffolding. So, a scientific explanation of the origin of the universe needs to use such concepts to make sense. It necessarily starts from something, which is the best that science can ever hope to do.

Even if we move on to the multiverse, things still need to be formulated in terms of fields, energy, spacetime, derivatives, etc. Furthermore, scientific hypotheses need to be testable and falsifiable, and we don't yet know how to do this with a quantum fluctuation that generates a universe. We can't set this experiment in the laboratory and examine the right conditions for universes to emerge from the quantum vacuum. Contrary to the origin of life question, we can't step out of the Universe to examine it from the outside in. At best, and this should be quite enough for a scientific explanation of cosmic origins, a model for the quantum origin of the Universe should lead to a cosmos compatible with current observations. Stepping out into the abstract multiverse may provide us with different plausible cosmoids and help us understand why our own Universe is so special. But unless there is a very clear selection principle that doesn't predicate our existence, the question as to why this Universe and not another will remain open.

And this is not at all bad. The fact that science answers so many questions doesn't mean it should answer all; or that some questions should only be answered through science. Before I am accused of advocating obscurantism, let me be clear. What I mean is that a scientific explanation to the origin of the Universe, at least one based in the current way we do science, cannot be self-contained. Sometimes we must have the humility to accept that our modes of explanation have limits and make peace with what we can do; and marvel at how much we can do without the pretense of knowing how to do everything.