Accessibility links
Second Genesis: Looking For Aliens Here, There And Everywhere : 13.7: Cosmos And Culture Did the seeds of life on Earth begin on Mars? Are we part of Earth's first alien invasion? Adam Frank says we may be looking at a future full of discoveries in our own solar system that could reset our understanding of life and its origin.

Second Genesis: Looking For Aliens Here, There And Everywhere

Second Genesis: Looking For Aliens Here, There And Everywhere 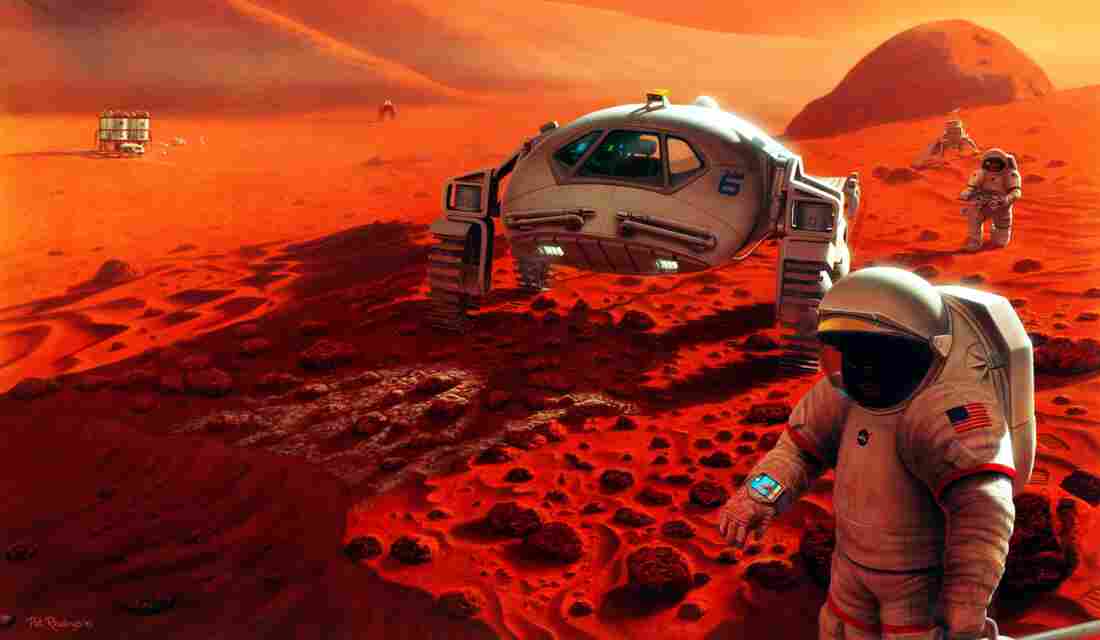 Will we need to tread lightly, in deference to the locals, when finally do make it to Mars? Pat Rawlings/SAIC/NASA hide caption

Not too long ago I asked an astrobiologist colleague if he thought the search for life on Mars would be successful. His answer, delivered deadpan, stunned me.

"Oh I think we will find life on Mars," he said. "But the real question will be: Is it our life?" The point my friend was raising is the fundamental question of the solar system's second genesis.

We know life formed once in the Sun's family of planets. What we can't be sure about is where or when that first genesis occurred. In the wake of those uncertainties, it is entirely possible we were Earth's first alien invasion.

The Earth and Mars have been swapping spit (astrobiologically speaking) for eons. Large impacts from comets and asteroids can launch debris deep into interplanetary space. The debris then wanders the vacuum, orbiting the sun for millions of years. The pull of a passing planet may capture these forsaken bits of geology and down the gravity well they go. If they are large enough, these chunks from Mars or Earth or Venus may make it through the atmosphere onto the surface (of Earth or Venus or Mars). That is where the fun and, theoretically, the contamination might begin.

Four billion years ago Mars might have been a blue world (or blue-ish). It was certainly warm and wet enough for liquid water to run across its surface. This epoch of Martian history — called the later Noachian — lasted perhaps just 500 (or so) million years. That is short compared to Earth's four billion years of habitability. But it may have been long enough to allow abiogenesis (life from non-life) to get going.

Then, a chance asteroid impact might have sent a chunk of microbe-laden Martian crust to Earth. Given what we now understand about extremophiles — bacteria on Earth that can live in the most extreme conditions — it is not unreasonable to think some hardy "spores" of Martian descent made it to this warm, wet world, seeding the beginnings our own lineage.

So, life might have started on Mars, not Earth.

Thus what we really are looking for as we explore other planets in our solar system is not just life, but life that is clearly not our own.

All living systems on Earth share common characteristics in terms of biochemistry and genetic systems. They all utilize the same aminio acids; they all rely on deoxyribonucleic acid (DNA), and ribonucleic acid (RNA). Given billions of years of planetary rock swapping, it may well be that any life we find on Mars (or elsewhere in the solar system) will share these characteristics with life on Earth. That would mean they all evolved from a common source — a single genesis.

The tree of life is the network of connections that links all organisms on Earth together through evolution. All the strategies and solutions worked out through over eons are there, somewhere, on that tree. If we find something that isn't a branch on the tree then we have found the second genesis. And it could be anywhere.

As noted astrobiologist Chris McKay puts it: "The term 'Alien Life' now refers to an organism that is not on our tree of life, regardless of what planet it is on. Alien life might even be here on Earth."

The implications of finding a second genesis would be, of course, scientifically profound. Not only would we have proof that life started more than once, by having a second example of biochemistry we'd gain a fantastically enlarged perspective on what evolution can do and how it can do it.

The human implications of a second genesis, however, would be just as profound. McKay, for example, has posed the question what ethics hold if the life we find on Mars is not on our tree of life? Would there then be an ethical imperative to protect that life at all costs and, in the name of life's diversity, do everything we could to help it thrive? How would that imperative be balanced if we were striving to establish colonies on Mars?

Our explorations of the solar system have shown that it holds a far richer set of possibilities for life and its history then we once imagined. Perhaps in 100 years we will be speaking of a fourth, fifth or even sixth genesis on the water-rich moons of the giant planets. In that brave new world who would we rightfully call the aliens?