Accessibility links
Rise Of The Superheroes: Winners And Losers : 13.7: Cosmos And Culture There was a time when superheroes confined themselves to the pages of comic books piled up in a kids room. Now they're on the big screen and in the mainstream of pop culture. Commentator Adam Frank says there are winners and losers in this transformation. 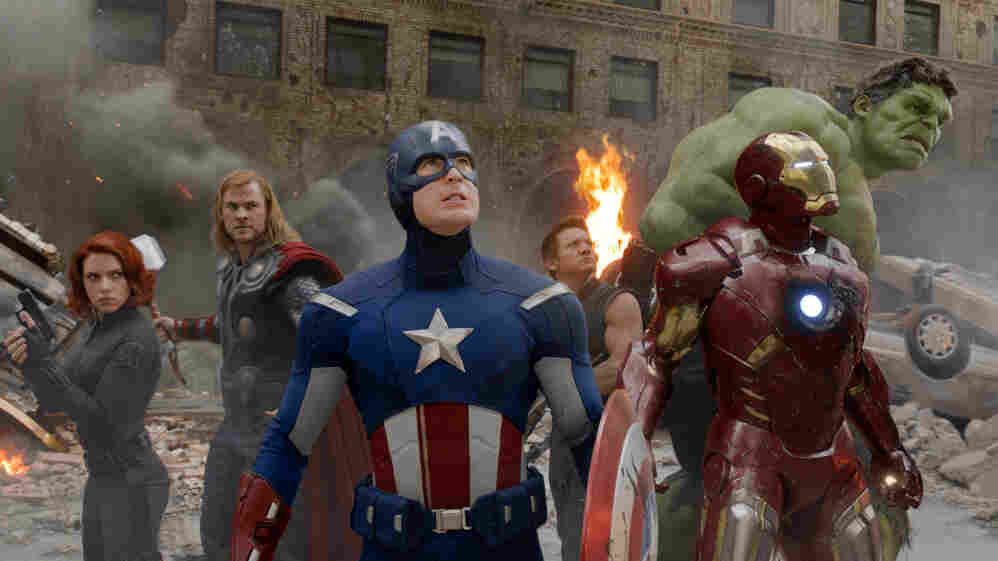 My dad was horrified when, at age 12, I struck out on my own and started reading comic books. He hated them. He'd raised me on a steady diet of "real" literature, from Treasure Island to Sherlock Holmes. Flimsy comics full of lurid drawings did not measure up.

Still, every week we made the trip to the newsstand and, holding his nose, he added to my paper-route money so I could dive deep into the exploits of Spiderman, the X-Men and StarLord. I tried to explain: "But Dad, these are Marvel Comics, so the characters have real problems and I'm learning new words like 'synopsis'!"

When I was older, I tried to argue that these stories were just a retelling of age-old myths in a modern form. Nothing worked. He was sure that comic books wouldn't stand the test of time.

Wow, was he wrong.

As we head into the summer blockbuster season we see, once again, the dominance of comic books in mainstream movie culture. This year it's Iron Man 3, The Wolverine (love those claws) and yet another stab at Superman (meh ... DC Comics never worked for me, but we'll see). Last year The Avengers hit us full force (Joss Whedon, please be my friend!?!), capping a multi-year run that included Thor, Captain America and The Incredible Hulk.

This year 13 movies based on comics (including eight sequels) are slated for release. In 2012, comic-book-based movies accounted for a whopping 14 percent of U.S. box office revenue. So, like it or not, comics have leapt off the page, onto the screen and into everybody's lives. They represent a huge chunk of our cultural imagination.

Armor And Anxiety: Tony Stark Is The New Captain America

Let's not argue now about high vs. low culture. I'm in the midst of writing a post on T.S. Eliot's The Waste Land; its beauty and depth are kicking my butt. But on the road from Tony Stark's (pretty racist) origin fighting a bunch of commies to a world where graphic novels can be just as artful as stories without drawings, something remarkable happened.

The nerds won. Our dorky compulsions and secret loves have blossomed into everyone's entertainment. Think of the huge followings garnered by The Walking Dead (originally a graphic novel) and Game of Thrones (not a comic, but something that would have been considered major dork-fodder in years past). I have no idea if this is a good thing. But I am happy to have the extra company and to see my favs come to life in big-budget Hollywood productions.

Part of the joy of being a dork used to be the determined loneliness of one's science fiction/comic/fantasy compulsions. Back in the day there were only a few other dorks who knew, really knew, Isaac Asimov's Foundation Trilogy. You could drop a Hari Seldon reference and get a few sly smiles from your fellow denizen's of the sci-fi bookstore.

You had to work for your dorky cred, poring over back issues of The X-Men and Captain America to get the whole story. Now all it takes is one Google search and the history of Emma Frost rolls out for you like a bunch of oranges from a broken shopping bag.

Patton Oswalt summed it up nicely in his excellent article "Wake Up, Geek Culture. Time To Die." For dorks, "There are no more hidden thought-palaces." Our favorite stories are no longer tucked away in the dark corners of nerd culture. They have now become — simply — pop culture.

My Dad it, seems, has lost. But, then again, I lost something, too.