Accessibility links
Tino Sehgal At The Venice Biennale : 13.7: Cosmos And Culture Commentator Alva Noë is taken by the work of Tino Sehgal at the 2013 Venice Art Biennale. It's hard to explain, but in the end he concludes that we do not stand apart from art. We are engaged with art in ways that we don't always expect.

This is coming to you from Venice, where I am attending the opening of the Art Biennale.

I find myself interested in Tino Sehgal's live piece installed in one of the main galleries of the Giardini. If the piece has a title, it isn't posted anywhere. I say "live piece" rather than "performance" because the work itself seems crafted precisely to question the nature of performance. 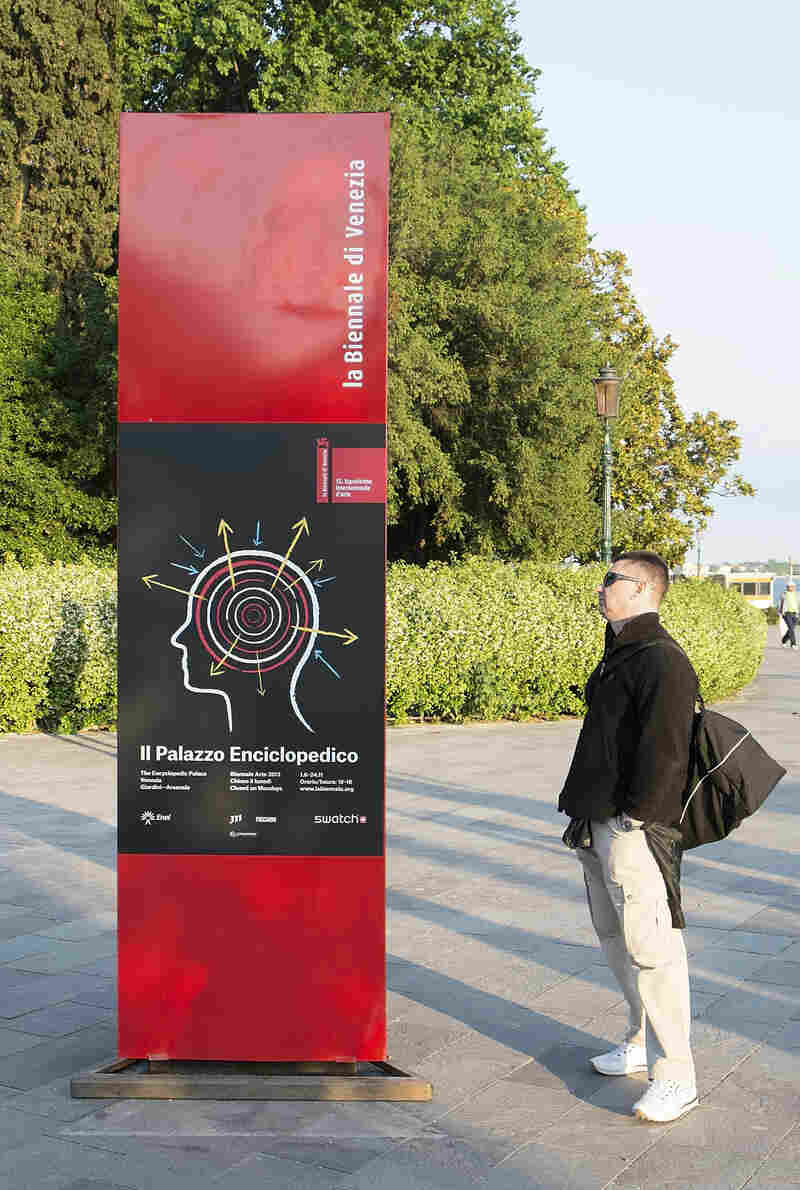 Il Palazzo Enciclopedico: A visitor puzzles over the multitude of choices offered by the the 55th International Art Exhibition of La Biennale di Venezia. It runs from June 1 to November 24, 2013. Marco Secchi/Getty Images hide caption 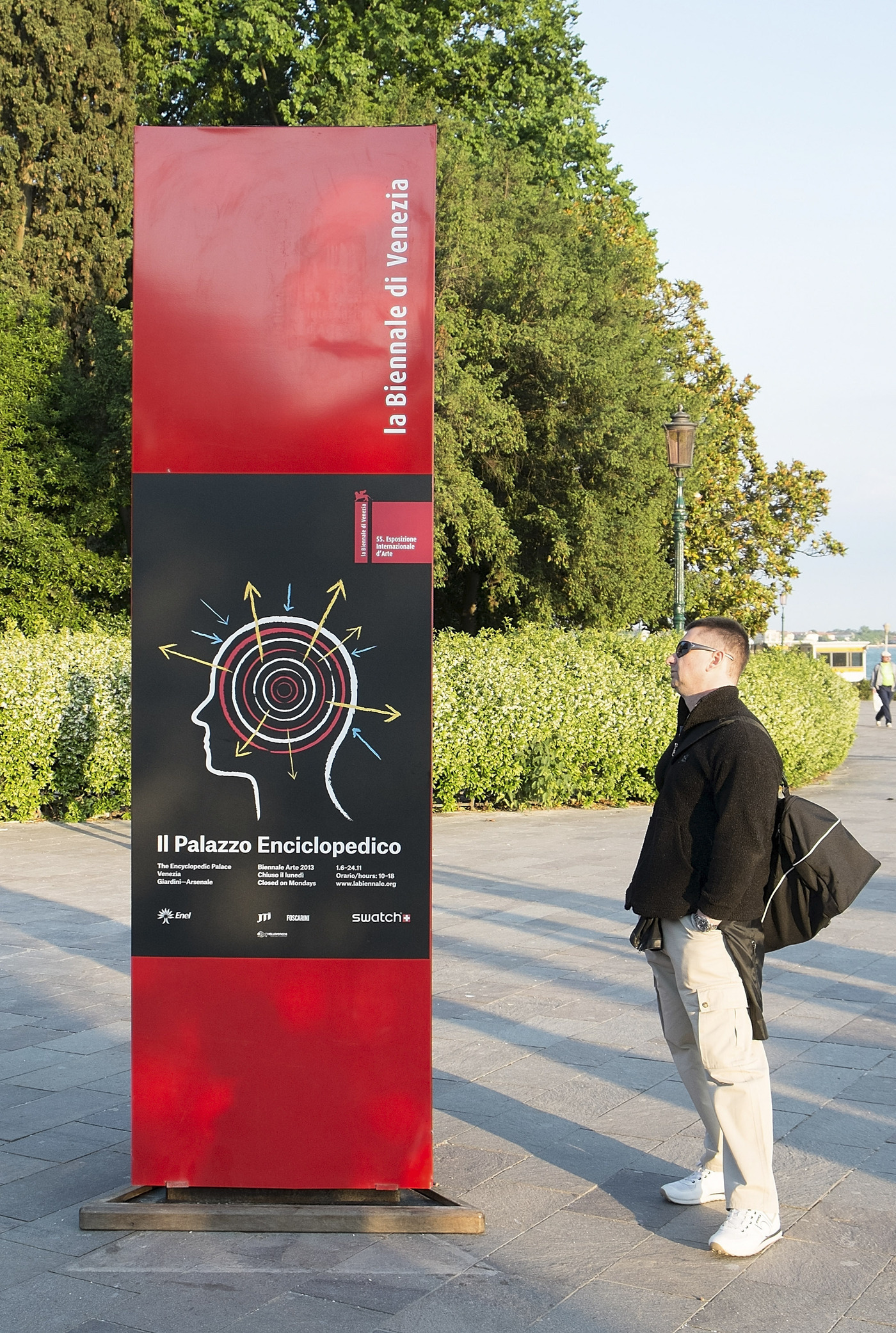 Il Palazzo Enciclopedico: A visitor puzzles over the multitude of choices offered by the the 55th International Art Exhibition of La Biennale di Venezia. It runs from June 1 to November 24, 2013.

It has no beginning, middle, or end; it is just there, just as pictures hanging on the wall of a gallery are just there.

In Sehgal's piece, a small number of people sit or lie on the ground; they improvise their own music with their voices. Sometimes it's vaguely electronic sounding, or even human beat-box; sometimes it's more like droning, or chanting, and always very rhythmic.

They move, evenly, slowly, to this self-generated music. Some movements are dancerly, others less so. Beyond the temporal organization of the music and smooth pacing of the movement, there is an obvious organizational structure. The performers — they are performers, after all — pay attention to each other, clearly responding to movements, gestures or sound.

I had the impression that they imitate each other, but not quite directly, always as if going to some core quality of a movement or feeling.

The piece hardly jumps out at you when you first enter the gallery. There are people on the floor moving slowly, making noise; there are dozens of visitors milling around them in the gallery. The work is invisible at first, just as it is unclear what, if any, logic or rule governs what is going on.

My first impulse was to find it uninteresting. I wanted to move on. Gradually, it came into focus. When I left, over an hour later, I felt that I had gotten to know something definite and particular.

The performers are made into objects in this piece. You feel no inclination to applaud them when they stop, no inclination to compliment them on their work. This is because their actions — though clearly their own and often quite virtuosic — seem governed by a task or instruction. Their performance is, in this sense, automatic.

Moreover, this work doesn't play the "attention" game that is so basic to the performing arts. It doesn't try to capture your attention, or direct it, or organize it. The work is just there, like a picture on the wall, and the actors might as well be battery-operated machines.

Of course, they are not automata. They are people. They are lovely, each in their own way, and they are obviously making choices about what to do and how to interpret whatever task it is that they have been given as a team and as artists.

On the surface, though, they are indifferent to you, entirely turned in on themselves and the demands of their task. Only one performer, in the course of the 90 minutes I watched, directed her gaze to me and to other people in the gallery.

Because they were on the floor of the gallery, moving and singing, and because the gallery was full of people, I actually had a vivid sense of the spatial boundaries of the piece. I also, of course, had a somewhat anxious feeling about how fragile those boundaries were. The actors colonized space on the floor, but occasionally someone — a child, for example — would walk through their grouping. Sometimes people would stand nearby talking loudly, or telephoning, as if not noticing they were intruding into the territory of the piece, disrupting it for others.

For reasons I won't discuss, Sehgal prohibits the documentation of his work. This meant that the performers in today's installation had two jobs. They were either on the floor "in" the work. Or they were out in the gallery policing the room. Every time someone with a press badge started to take pictures, the actors, like undercover cops, pounced.

Whatever the intent, this patrolling of the boundaries of the piece belongs to the work itself. What we have is a piece within a piece, and we ourselves are folded into the act.

The play within a play is an object for us to contemplate. But the play itself, the one in which we find ourselves, is anxious; its boundaries are undefined, its subject matter open ended; it is an object of contention.

Art doesn't activate us, as psychologists and neuroscientists like to think. Rather, it gives us an opportunity to activate it, to switch it on and make it happen. Sehgal's work at this year's Biennale is a fine example.