Accessibility links
The Fat-Shaming Professor: A Twitter-Fueled Firestorm : 13.7: Cosmos And Culture Higher education is not immune to prejudice, a statement seemingly confirmed by a university professor's tweet denigrating the academic skills of obese people. The result has been a powerful online debate. Yet the question still remains, what should be done about unwarranted bias against obese people?

On Sunday, evolutionary psychologist Geoffrey Miller, a professor currently on leave from the University of New Mexico with a visiting position at New York University, tweeted a comment that sent shock waves through academia and beyond: 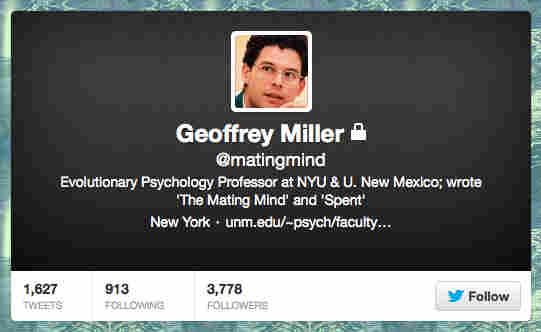 Later that same day, Miller deleted the tweet. But screen-captures like this one were already let loose, and the tweet soared through cyberspace. Then Miller tweeted "sincere apologies," noting first that the "idiotic, impulsive, and badly judged tweet does not reflect my true views, values, or standards" and then adding "Obviously my previous tweet does not represent the selection policies of any university, or my own selection criteria."

The double "sorry" messages have not slowed the resulting firestorm, which has propelled Miller into national prominence as a fat-shaming professor. Media outlets as varied as Inside Higher Ed, The Atlantic, New York Magazine and Jezebel have covered the story.

I sent an email message to Miller on Monday, asking if he would like to make any statement for 13.7; he did not reply.

Why has the response to Miller's tweet been so powerful and so biting? I can think of at least three reasons.

Fat-shaming is all too pervasive. I asked Rebecca Puhl of Yale University's Rudd Center for Food Policy and Obesity to contextualize Miller's denigration of obese people. In an email message sent on Monday, Puhl noted that weight bias is widespread and socially acceptable in our culture:

Our research with national samples of thousands of Americans shows that reports of weight discrimination have increased by 66 percent in the past decade, and are now on par with rates of racial discrimination – especially for women.

The researchers examined 97 applicants to a graduate program in psychology at a large university. The applicants reported their height, weight, and provided information about their applications to psychology graduate programs. Researchers then analyzed and coded their letters of recommendation for positive and negative statements as well as overall quality.

Once qualified overweight candidates were viewed in person, in other words, their chances of admission tanked.

Puhl described the second study by Viren Swami et al. in these terms:

198 participants (both men and women) were asked to select a female candidate that they would most and least likely choose for admission to university from an array of figures varying in body size. Results showed a clear bias against selection of overweight and obese women, who were only selected by 6 percent of participants for university admission compared to the selection of underweight figures by 60 percent of participants.

Miller continues to make assertions that strike people as bizarre. As reported Monday by UNM, Miller has informed his department chair that the tweet in question is part of a research project — as yet publicly unnamed and undescribed. UNM has pledged to look into the validity of this claim by Miller "and take appropriate measures."

Many academics have wondered aloud on social media what I wonder too: if such a research project indeed exists, has it been approved by Miller's university ethics review board? Such boards function to protect human "subjects" from physical or psychological harm when academic research is conducted. In what possible world would Miller's tweet not have the potential to cause psychological harm?

Few of us are certain about the right course of action in a case like this. Should Miller be sanctioned? Or should the higher-education community take his apologies at face value and move on?

That Miller should not take body weight into account when he selects, or helps to select, graduate students is self-evident; it's #truth, to use Miller's vernacular.

But another interesting point of view, coming in a Facebook comment from anthropologist Rosemary Joyce, did catch my attention:

[Anyone] who is prejudiced against people based on body size shouldn't admit larger people; the self-fulfilling prophecy potential in performance is too high.

Joyce intends, of course, to protect obese individuals from hurt or harm. We wouldn't wish to move, though, to a system in which those in power in academe are allowed never to encounter the skills, indeed the humanity, of the targets of their prejudice, would we?

What should be done? That question is still in play. In the context of fair practices in higher education, it must be answered.