Accessibility links
The Mysterious Underrepresentation Of Women In Philosophy : 13.7: Cosmos And Culture Academic philosophy is an outlier within the humanities, with fewer than 20 percent of full-time faculty positions occupied by women. Commentator Tania Lombrozo discusses some recent findings that might help us understand why. 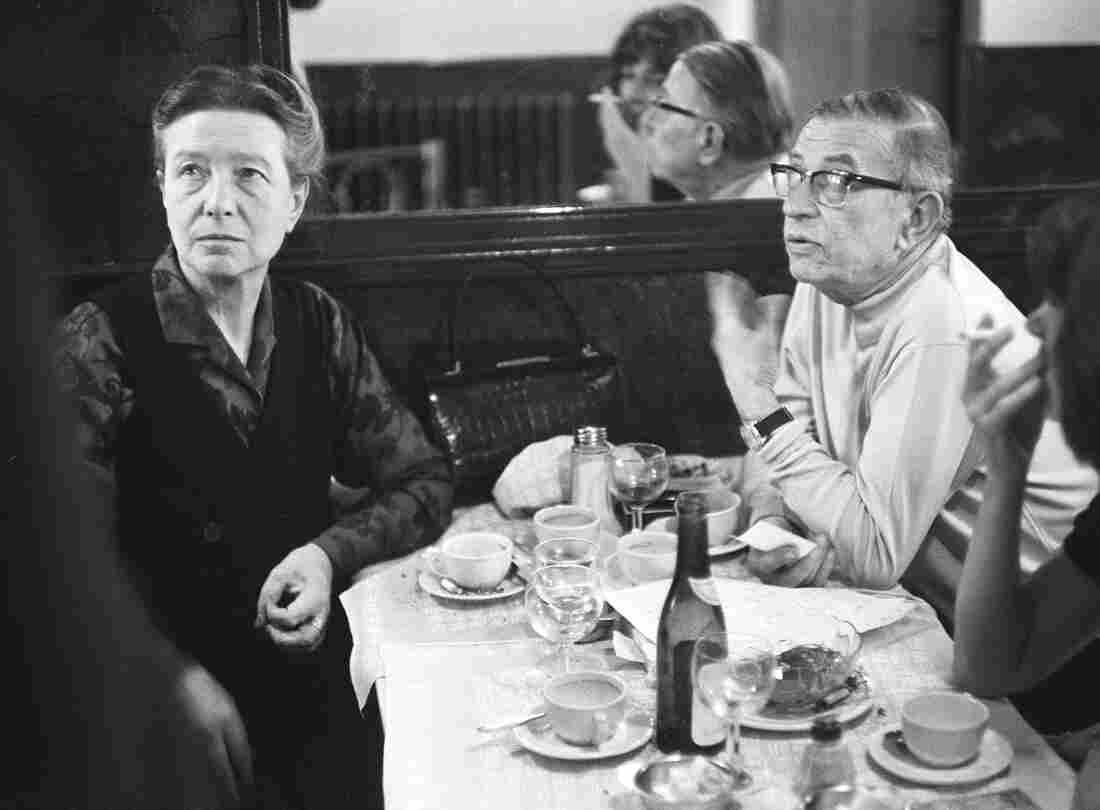 A rare moment of gender parity in philosophy: Simone de Beauvoir and Jean-Paul Sartre at a Paris cafe in May 1970. STF/AFP/Getty Images hide caption 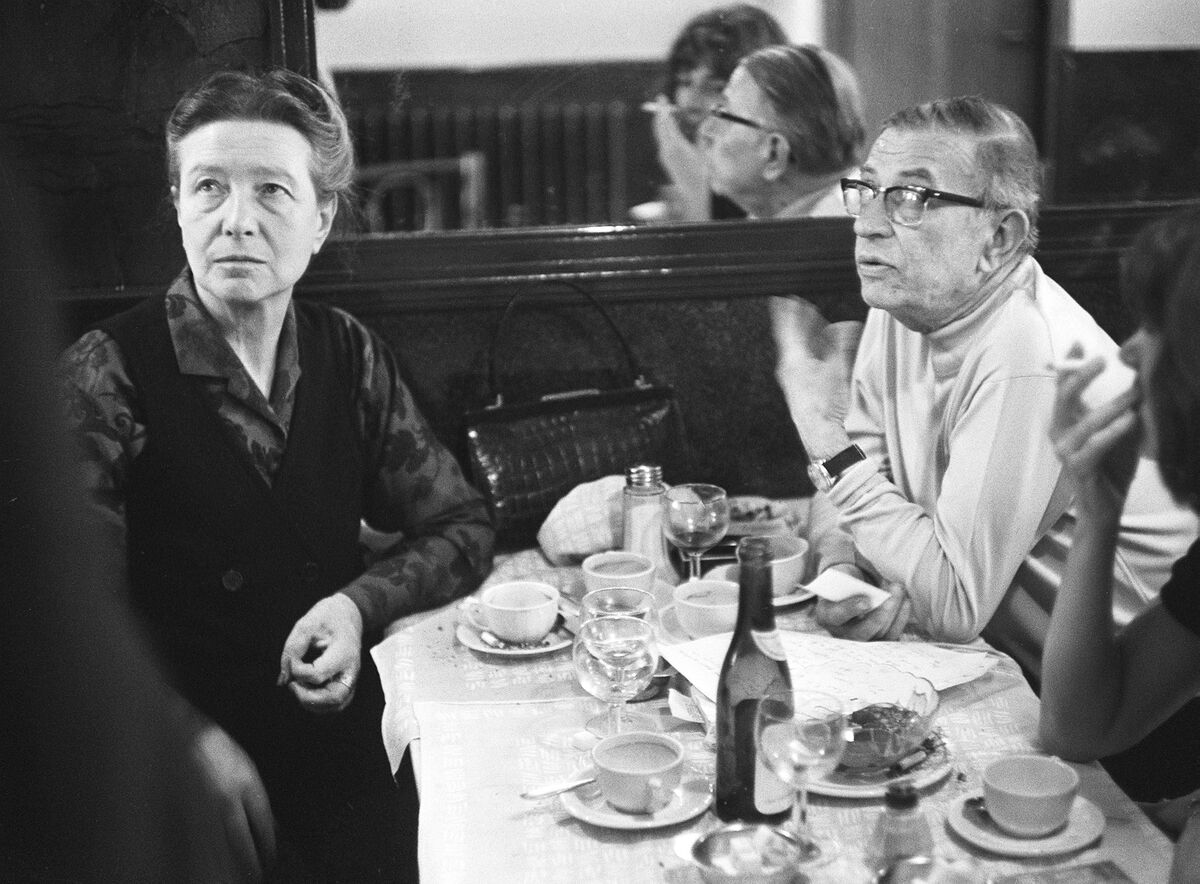 A rare moment of gender parity in philosophy: Simone de Beauvoir and Jean-Paul Sartre at a Paris cafe in May 1970.

Last Friday I found myself in a lovely lecture hall at Brown University with some 50 philosophers and psychologists attending the annual meeting of the Society for Philosophy and Psychology, affectionately known as "SPP." Daniel Dennett was in the seat just ahead of me; additional luminaries were scattered about the room. A quick count revealed about equal numbers of men and women in the audience — an unusual figure for an event in philosophy, where women make up less than 20 percent of full-time faculty.

That was precisely the topic we'd gathered to discuss: the underrepresentation of women in philosophy, where numbers mirror those for math, engineering, and the physical sciences, making philosophy an outlier within the humanities.

There's been no shortage of speculation about why. Perhaps, to quote Hegel, women's "minds are not adapted to the higher sciences, philosophy, or certain of the arts." Perhaps women are turned off by philosophy's confrontational style. Perhaps women are more inclined toward careers with practical applications.

But the most plausible hypothesis is that various forms of explicit and implicit bias operate in philosophy, as they do within and beyond other academic disciplines. Unfortunately, though, this explanation refines our question rather than answering it.

Why should bias be any greater in philosophy than in other humanistic disciplines? Is sexual harassment unusually common within philosophy, as might be suggested by the recent scandal involving Colin McGinn, not to mention some chilling experiences reported in the blog What is it like to be a woman in philosophy? Might our implicit assumptions about what a philosopher should look like and sound like be especially hard to reconcile with our implicit assumptions about women?

Until recently, most of these hypotheses lacked empirical grounding. Collecting relevant data is no easy task, and social scientists weren't exactly lining up for the task. So part of the excitement last Friday — as we waited for a presentation titled "Women and Philosophy: Why is it 'Goodbye' at 'Hello'?" — was the promise of data. The speakers were Toni Adleberg and Morgan Thompson, two master's degree students at Georgia State University, presenting preliminary findings from work with Professor Eddy Nahmias.

Adleberg and Thompson noted that we don't know exactly why women leave philosophy, but thanks to SPP-supported research by Molly Paxton, Carrie Figdor and Valerie Tiberius, we have some idea of when: the biggest drop in the proportion of women in the philosophy pipeline seems to be from enrollment in an introductory philosophy class to becoming a philosophy major. At Georgia State, for example, women make up about 55 percent of Introduction to Philosophy students but only around 33 percent of philosophy majors.

To better understand why, Adleberg, Thompson, and Nahmias collected data from over 700 male and female students on their experiences in the Introduction to Philosophy course at their university. The findings were revealing, as Adleberg explained:

We expected, of course, to find some gender differences in the survey responses. But the extent of those differences was surprising to me. Male and female students seem to have quite different experiences in introductory philosophy courses.

Overall, female students found the course less enjoyable and the material less interesting and relevant to their lives than male students. Compared to male students, they also felt that they had less in common with typical philosophy majors or with their instructors, reported feeling less able and likely to succeed in philosophy, were less comfortable participating in class discussions and were less inclined to take a second philosophy course or to major in philosophy. (Interestingly, however, they didn't anticipate receiving lower grades.)

Contrary to some speculation in the field, female students did not perceive classroom discussions as overly aggressive, and they were no more likely to say that students in the class failed to treat each other with respect. In an email, Thompson told me:

I was really surprised that both women and men do not perceive the philosophical discussions in their introductory course to be excessively combative. Given my experience attending both philosophy talks and neuroscience talks, I've noticed a distinct difference in the types of questions asked and the way that criticisms are raised.

Notably, the differences in men's and women's responses were equivalent when the course was taught by male and female instructors, but in both cases female students were more likely to disagree with the claim that the syllabus included a "fair proportion" of readings authored by women. In fact, the readings on the syllabus were overwhelmingly by men (over 89 percent). And, furthermore, Thompson explained:

Do some of these features of women's experiences make them less likely to pursue philosophy? Some additional analyses suggested that they do: the researchers found that the perception of the gender ratio on the syllabus and the perception of philosophy's usefulness for getting a job were both partial mediators of the relationship between gender and an intent to persist in philosophy.

The researchers also considered how students' experiences differed as a function of race. In an email, Nahmias told me:

I was a little surprised to see that there were so many parallels in the different patterns of responses to our survey between men and women and between white and black students.

Adleberg said the data may point to a need for new approaches in the classroom:

Reflecting on their findings so far, Nahmias suggested that philosophy can do a better job introducing itself to incoming students:

We need to figure out why so many women and minorities say "goodbye" to philosophy right when we say "hello" to them. College students typically have little idea what philosophy is all about when they step into the intro class (almost none had philosophy in high school). First impressions are therefore that much more important. We need more data, but so far, I suspect it makes a difference when these students get the impression that men do philosophy and women don't, because, for instance, they only read one woman author and 20 men over the semester. I also think women, minorities, and first-generation college students may be more concerned about whether their major will help them get a job. Even if these students leave the intro course thinking philosophy is fun (and to be clear, it looks like white males find it more fun and interesting), they may not take more unless they can see that philosophy majors are valued on the job market. Since philosophy is a good major for a wide variety of careers (and philosophy majors do better than almost all other majors on tests like the LSAT and do well getting into various graduate degree programs), we might need to do a better job of "marketing" our field.

Of course, students' experiences in introductory philosophy courses are but one part of a larger story — assorted social and cultural forces influence women's decisions and careers at all life stages, with some special challenges for mothers. As in math, engineering, and the physical sciences, some gender-based differentiation is likely occurring even before college. Louise Antony, for instance, a prominent philosopher who heard the presentation, was glad that research of this sort was being conducted, but worried that the gender parity observed in introductory course enrollment numbers could be an artifact of university breadth requirements and therefore obscure differences between male and female students that develop well before their first day of Philosophy 101.

To borrow a metaphor from a paper by Antony herself, philosophy could involve a "perfect storm" of social and psychological factors that conspire to make it difficult for women to persist in the field. No single intervention is likely to change the climate.

Nonetheless, the findings from Adleberg, Thompson and Nahmias suggest some simple recommendations that could have important effects. With the support of the Georgia State Department of Philosophy, for example, the researchers will test out one strategy for attracting more women to the major: this fall, graduate student instructors will use course syllabi with 20 percent or more female authors, at least doubling the current proportions.

It's not enough, but it's a great place to start.