Accessibility links
Laws Of Man And Laws Of Nature : 13.7: Cosmos And Culture The laws of man order society, making sure we don't descend into chaos; the laws of nature reveal ordered patterns. Commentator Marcelo Gleiser considers the similarities and differences between the two, and whether the laws of Nature could change, as the laws of man do.

Laws Of Man And Laws Of Nature

Laws Of Man And Laws Of Nature 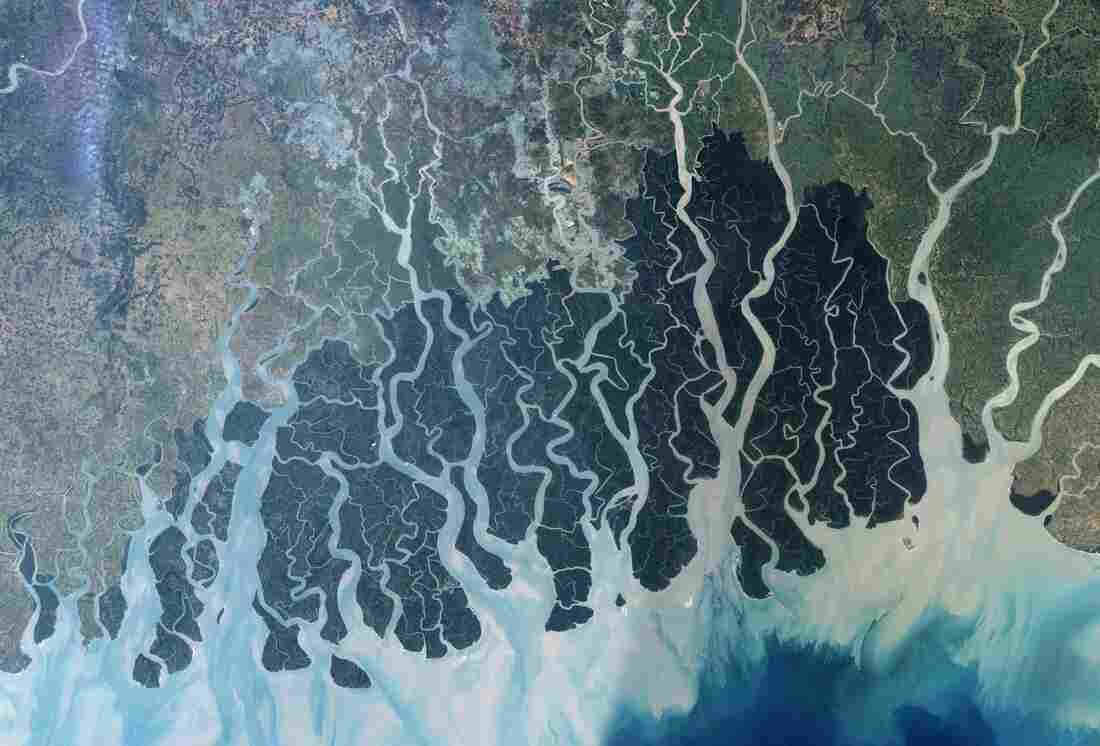 The Sundarbans, a mangrove forest at the edge of the Bay of Bengal, stretch across parts of southwestern Bangladesh and southeastern India. NASA hide caption

We humans are an unruly bunch. So much so that we need laws to keep order, to make sure we stay on track. Without our laws, society would quickly descend into chaos. The laws of man are guarantors of order, a necessary control against the inherent greediness of our species.

Nature, on the other hand, shows ordered patterns at all scales: trees branch, and so do rivers, bodies, and arteries; tides and planetary orbits are periodic, day follows night, the seasons alternate, the moon has phases. The display of order in Nature allowed for a methodic counting and organizing as a means to gain some level of control over what was otherwise distant and unapproachable, the marching patterns of a world moving in ways beyond human reach.

The laws of Nature, from the simplest to the most complex, are attempts to summarize this widespread display of order. They are discovered from repeated observation and often allow for a concise mathematical expression. Sometimes laws are deduced from mathematics, as if we could divine Nature's secret patterns. Physicists are fond of saying that the simplest laws with the most explanatory power are the most elegant or beautiful. A favorite example is the law of conservation of energy (or, even better, of energy and momentum), or of electric charge: in every interaction between bodies of matter, the total energy is the same before and after, and the total electric charge is the same before and after. Even if these laws are approximations (as are any physical laws), in the sense of being the results of measurements of finite precision, we haven't seen any indication of a departure yet.

The laws of Nature are very different from the laws of man. While the laws of man seek to order and control individual and social behavior so as to make communal life less risky, the laws of Nature are deduced from long-term observation of repeatable patterns and trends. While the laws of man may vary from culture to culture, based as they are on moral values that lack universal standards, the laws of Nature aim at universality, at uncovering behaviors that are true — in the sense of being verifiable — across time and space. Thus, while certain cultural trends that are accepted in one group may seem barbaric to others (such as female circumcision), stars across the Universe have been burning according to the same rules since they've first appeared some 200 million years after the Big Bang. Likewise, while in some countries the death penalty is abhorrent and in others it is exercised with almost fanatical zest, atoms and molecules across trillions of planets and moons in this and other galaxies combine and recombine in chemical reactions that follow patterns of order based on well-defined laws of conservation and of attraction and repulsion.

The variation in the laws of man shows that we know little of ourselves and of what are, or should be, truly universal moral standards. On the other hand, the apparent certainty of the natural laws seem to confer a sense of trust and finality to the laws of Nature that has inspired many a movement to use them as a basis for all laws, including the laws of man. The Enlightenment, of course, is a well-known example. Fortunately, the quantum revolution of the early twentieth century was quick to show that the overconfidence of a clockwork determinism was greatly exaggerated; there is uncertainty in the Universe and any hope of making physics into an oracle is doomed to fail.

Given this somewhat novel way of thinking, a question that must be considered, and that some people, such as physicist Lee Smolin and Harvard philosopher Roberto Mangabeira Unger, are considering, is whether the laws of Nature can change. (A treasure-throve of Unger's writings and thinking can be found at his website.) After all, the laws of man certainly change as constitutions are amended, revised and interpreted by courts around the planet. Could the laws of Nature also have been different in the past? Could they change in the future?

We don't know the answer to this question; for our own sake, we hope that if they do, that it will only happen in the very distant future. A breakdown of the laws of Nature would provoke the most awful unraveling of organized material structures, from galaxies to people. Fortunately, we have reason to feel safe.

We know that if the laws of Nature do change, they haven't in a very long time. The Universe has been evolving under similar laws from at least a few seconds after the Big Bang until today, that is, for the past 13.7 billion years (or so). It is possible that the laws were different right next to the Big Bang, or even before the Big Bang, in a different cycle of existence, but that was then.

Thinking whether the laws of Nature can change is a worthy subject of natural philosophy, and I'll address it some other time in more detail. Meanwhile, we can go on studying the pretty steady laws of Nature as they hold now, while putting some extra effort in developing higher moral standards for our species.