Accessibility links
Science, Scientism, Society And Steven Pinker : 13.7: Cosmos And Culture Steven Pinker's recent New Republic essay titled "Science Is Not Your Enemy" has generated lots of discussion. Commentator Adam Frank's response is to call out Pinker for missing a key point in the debate around the squishy concept of scientism. 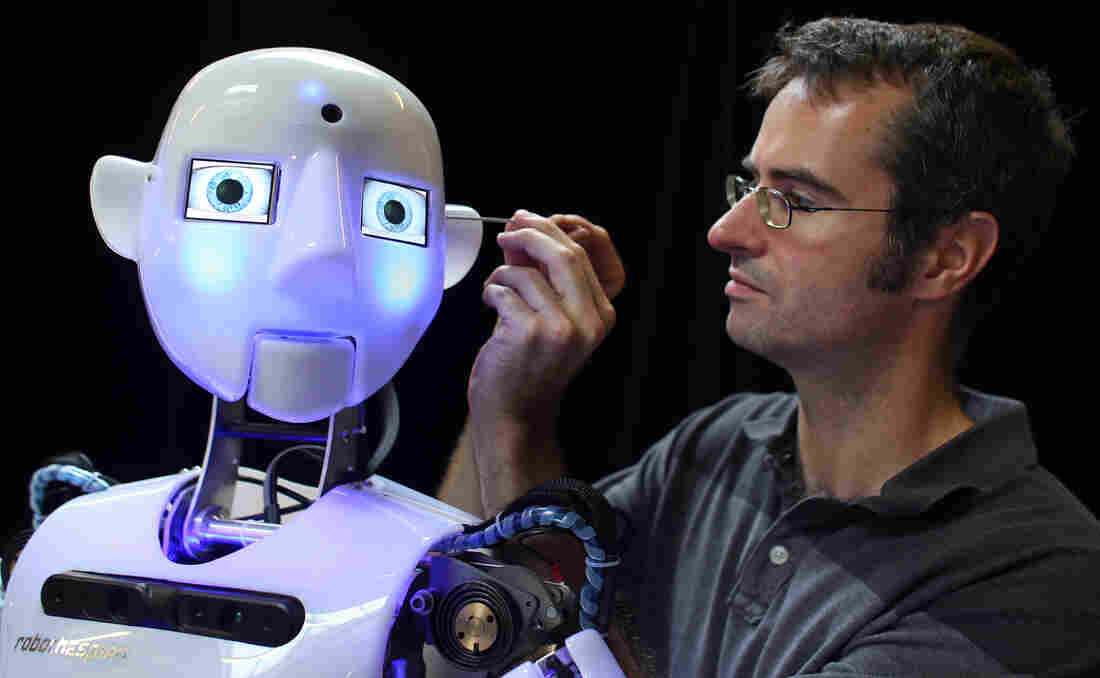 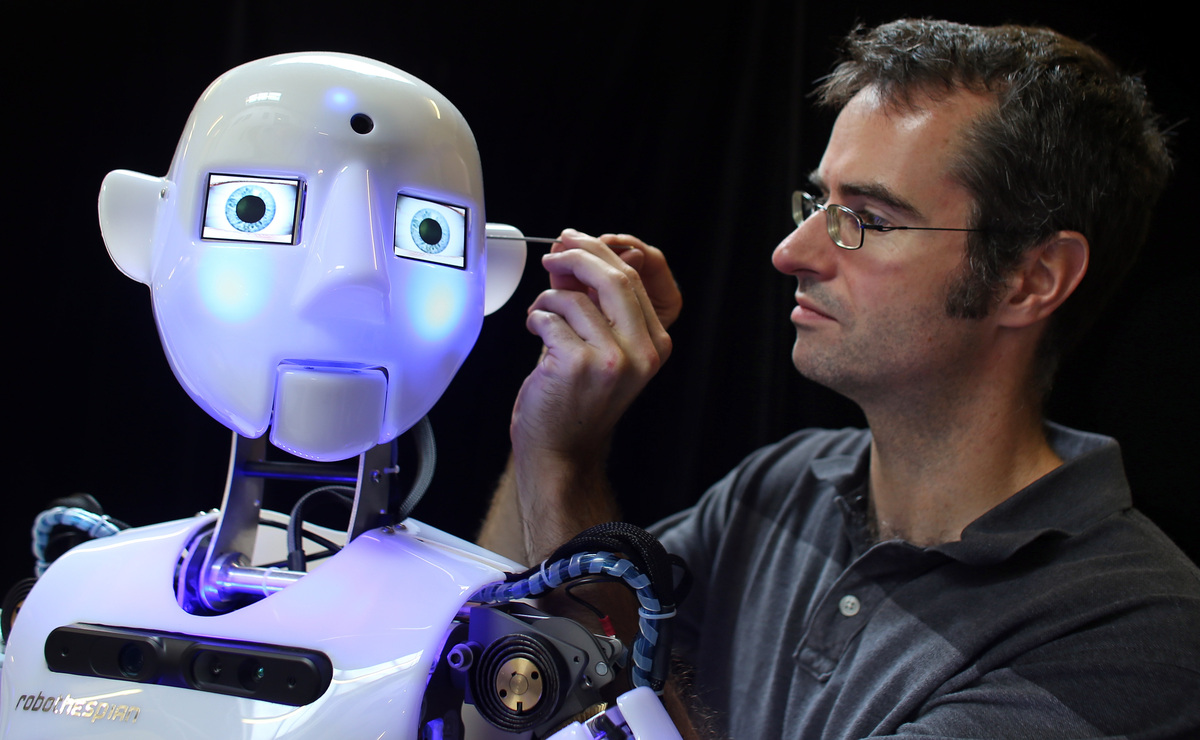 No matter what face you put on it, science is a powerful tool. Here, engineer Marcus Hold works on a nearly completed RoboThespian. Marvels of modern science, these fully interactive and multilingual humanoid robots are increasingly being sold to academic research groups.

Can you be a strident defender of science and still be suspicious of the way it is appropriated within culture? Can you be passionate about the practice and promise of science, yet still remain troubled by the way other beliefs and assumptions are heralded in its name? If such a thing is possible, you may be pro-science but anti-scientism. And, if that is the case, then Steven Pinker may have just pissed you off. But, as we'll see, it might be hard to tell.

Scientism is getting a lot of play these days. It's a difficult word to pin down because it takes on a wide range of meanings depending on who is throwing it around. According to Merriam-Webster online, scientism is:

an exaggerated trust in the efficacy of the methods of natural science applied to all areas of investigation (as in philosophy, the social sciences, and the humanities).

Thus, scientism is the "science can explain everything," (or, at least, "science explains everything important"), kind of position some folks take in arguments about religion, philosophy, the value of the humanities, etc.

Steven Pinker has now waded into the scientism debate with a New Republic essay entitled "Science Is Not Your Enemy: An impassioned plea to neglected novelists, embattled professors, and tenure-less historians." For Pinker there really is no such thing as scientism, which, he claims, is "more of a boo-word than a label for any coherent doctrine."

The problem with Pinker's essay is that his main purpose is to convince friends in the humanities (history, literature, etc.) that adoption of methods from the science side of the campus poses no threat to their disciplines. On the contrary, data mining of historical records, he would claim, may shed new light on the mechanisms of history. And Pinker is clear about the importance of the humanities when he states:

No thinking person should be indifferent to our society's disinvestment from the humanities, which are indispensable to a civilized democracy.

If this were all there was to the scientism debates then I, for one, wouldn't see much need to weigh-in. Pinker says a lot that is eminently reasonable in the essay. But there is a much deeper question about science and culture and Pinker seems to step right over this bumpy ground without even noticing.

Pinker speaks about a sense of recrimination against science for its place in human life. He cites his own experience of such attitudes as a professor at Harvard:

When Harvard reformed its general education requirement in 2006 to 2007, the preliminary task force report introduced the teaching of science without any mention of its place in human knowledge: "Science and technology directly affect our students in many ways, both positive and negative: they have led to life-saving medicines, the internet, more efficient energy storage, and digital entertainment; they also have shepherded nuclear weapons, biological warfare agents, electronic eavesdropping, and damage to the environment." This strange equivocation between the utilitarian and the nefarious was not applied to other disciplines. (Just imagine motivating the study of classical music by noting that it both generates economic activity and inspired the Nazis.) And there was no acknowledgment that we might have good reasons to prefer science and know-how over ignorance and superstition.

What Pinker fails to see in this passage is that it is precisely the enormous power and the enormous success of science that put it in a unique position for misuse by those who claim to speak in its name.

Over the last four centuries the practice we call science has utterly reshaped human civilization in ways that have no precedent. Science, on its own, is simply a practice, it's a method for asking questions finding answers. It's a way to approach the world. The ability to harness that practice to create powerful change (via wealth creation or military power) has always carried its own dangers.

The efficacy of science generates a powerful attraction for advocates of (often unspoken) philosophical assumptions. These are people who seek to cloak their beliefs in the legitimacy of the scientific enterprise. This is where scientism raises its ugly head.

Pinker is right to argue, as he does, that science can't be blamed for the stupidities of social Darwinism, eugenics or the communist insistence that it had found a science of history. But his easy dismissal of scientism as a "boo-word" misses the point that science gets used within culture for more than just legitimate purposes. In fact it's the very efficacy of its tools that allows cultural misappropriations of science to go unnoticed.

Part of this misappropriation comes from thinking that, since science is so good at providing explanations, explanations are all that matter. It's an approach that levels human experience in ways that are both dangerous and sad. In discussions of human spirituality and science, for example, it leads to cartoon arguments between Richard Dawkins and fundamentalists about who started the universe. Missing are the varieties of reasons people feel "spiritual" longing that have nothing to do with asking how the moon got there.

The power and promise of science is not compromised by understanding that we live in a world saturated by its fruits and poisons. Pinker is quite right that scientism is not a coherent doctrine. But that doesn't mean the term is empty.

Scientism is an unfortunate consequence of the success science has had explaining the natural world. It would, in fact, be useful to clarify how scientism manifests itself. That would help us understand the damage it does to the real project that lies ahead of us: building space for the full spectrum of human being in a culture fully shaped by science.