Accessibility links
When Did Human Speech Evolve? : 13.7: Cosmos And Culture A new study that relies on brain-imaging of cerebral blood flows suggests that human speech and complex tool-making skills emerged together almost two million years ago. Commentator Barbara J. King digs through the evidence and offers her own take on this age-old question.

When Did Human Speech Evolve?

When Did Human Speech Evolve?

About 1.75 million years ago, our human ancestors, the hominins (who you may remember as the hominids), achieved a technological breakthrough. They began to craft stone hand axes (called Acheulean tools) in ways that required more planning and precision than had been used in earlier tool-making processes. Around the same time, these prehistoric people began to talk.

In other words, tool-making skills and language skills evolved together; our language, as well as our technology, has a long prehistory. 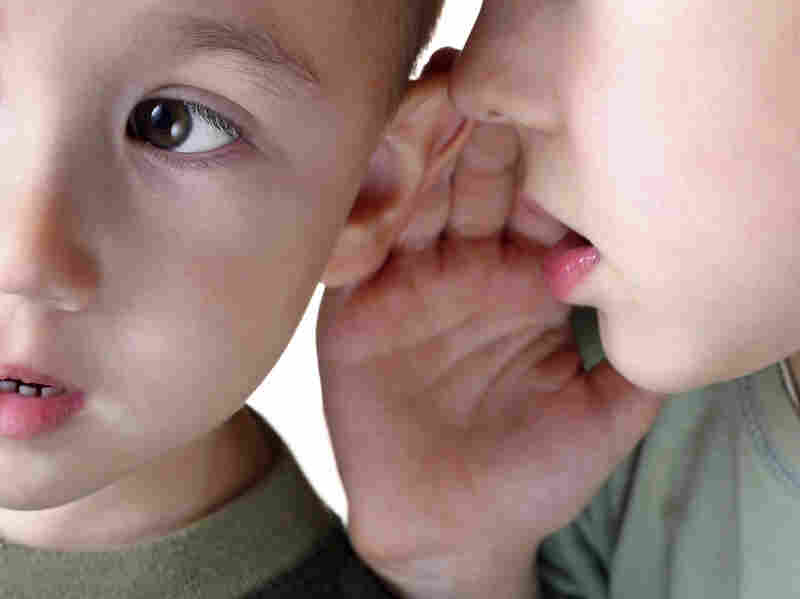 Language may have evolved in concert with tool making. Sergey Lavrentev/iStockphoto.com hide caption

Language may have evolved in concert with tool making.

That's the conclusion of research published last Friday by archaeologist Natalie Thais Uomini and psychologist Georg Friedrich Meyer in the journal PLOS ONE. Theirs is a provocative study that uses modern brain-imaging techniques to probe thorny questions of our distant past.

Asking when our ancestors first began to talk is a challenging query. It's quite different from seeking the origins of bipedalism, where skeletal material may reveal key clues, or of the origins of technology or art, where artifacts may hold the answers. Speech organs don't fossilize and it's challenging to link up artifacts with the earliest speech.

This new paper, then, deserves some attention. I'd like to explain the context for why and how the researchers tackled the origins of speech, report their experimental findings and consider some critical responses to their conclusions.

Uomini and Meyer kick off their article with a key distinction: The earliest stone tools (Oldowan tools) in the archaeological record of hominin activity are securely dated (so far at least) to 2.5 million years ago. By contrast, the timing for the origin of speech is hotly debated — unsurprisingly, given the challenges recounted above. Dates suggested range between two million and 50,000 years ago. That's a huge span and a clear motivator for more research.

Uomini and Meyer's approach — building on earlier formulations, such those presented in an influential 1991 paper by Patricia Greenfield — was to measure patterns of brain activation in modern people as they demonstrated both linguistic and technological skills, which share what is called "the need for structured and hierarchical action plans." The authors decided to seek "direct evidence that both skills draw on common brain areas or result in common brain activation patterns."

In order to do this, Uomini and Meyer recruited 10 experienced flint knappers who were willing to go about their craft while wired up to an fTCD device — a functional transcranial Doppler ultrasonography machine that measures cerebral blood flow. Unlike the fMRI and PET techniques, the fTCD doesn't require that the person hold still during the scanning. In fact, it accommodates a great deal of movement.

The participants, while wired to the fTCD, were given two tasks: to make a hand ax in the tradition of ancient hominins (the technology task) and to think up, but not verbalize aloud, a list of words, all starting with the same designated letter (the linguistic task). The tasks were interspersed with control periods (striking the core but not making a tool and sitting quietly respectively). The researchers' prediction was as follows:

And that is exactly what they found, "common cerebral blood flow lateralization signatures" in the participants, a finding "consistent with" a co-evolution of linguistic and skilled manual-motor skills. Uomini and Meyer then go for the big, evolutionary conclusion:

Our results support the hypothesis that aspects of language might have emerged as early as 1.75 million years ago, with the start of Acheulean technology.

In my own theorizing on the evolution of language, I've always thought that an earlier rather than a later date for the origins of speech was likely.

The communication skills (both vocal and gestural) of our closest living relatives — chimpanzees, bonobos and gorillas — are complex, and presumably (though not definitely) indicate the evolutionary platform from which hominin linguistic skills evolved. But does the Uomini and Meyer approach relying on blood-flow patterns in modern people really help us learn about the past?

Writing in the AAAS publication Science, Michael Balter has reported on assessments of the new research by other scholars in the field. Most notable to me is archaeologist Thomas Wynn's concern that the fTCD technique measures blood flow to large areas of the brain but without as high a resolution as fMRI or PET.

I asked Iain Davidson, emeritus professor of archaeology at the University of New England in Australia, a person expert in matters of human evolution, language and tools (see him in action starting at 38:00 in this video) for his thoughts on the new research. Davidson replied to me in an email message:

Of course a modern person aiming to make a hand ax does so with a plan and with real conceptual thought about how to proceed, and it might be a great relief to the new phrenologists of brain monitoring that their studies show this. But it does not tell us anything about how hand axes were made or what relationship that may have had with cognitive function when hominins had different brains and unknown need for plans or conceptualisation in making such tools.

I agree with Davidson. The methodology used in this research — carried out via the portable fTCD — may have a high coolness factor, but as far as giving us credible clues to hominin speech goes? I'd say no: the actions and blood-flow patterns of ten 21st century people can't get us there. Will we ever discover when our kind began to talk? That remains an open question.