Accessibility links
Why Gorillas Aren't Sexist And Orangutans Don't Rape : 13.7: Cosmos And Culture Recently the media had a field day with reports of a "sexist" male gorilla in Dallas named Patrick. Anthropologist Barbara King reflects on whether terms like "sexism" and "rape" are used justifiably when describing our evolutionary cousins the apes. 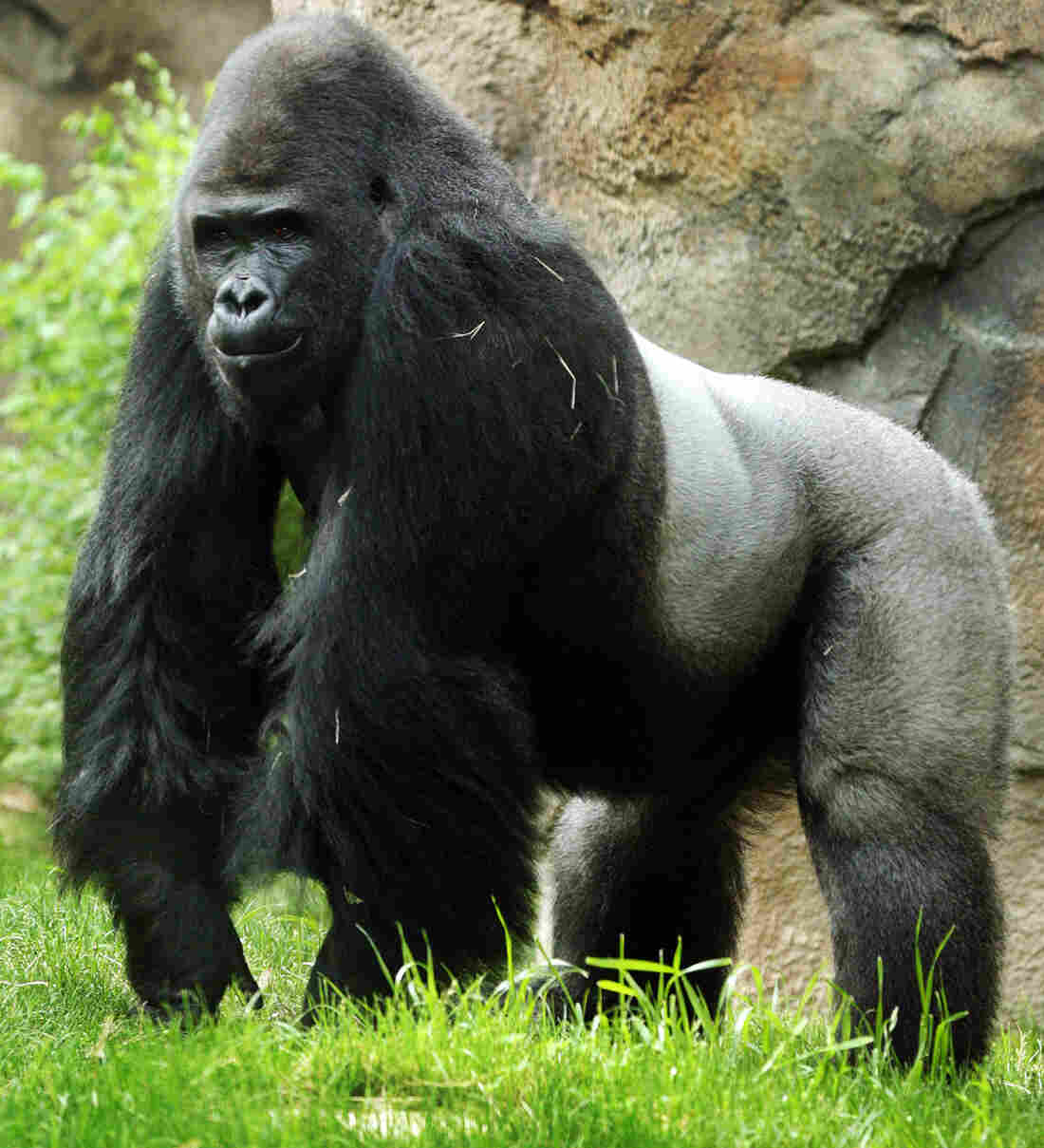 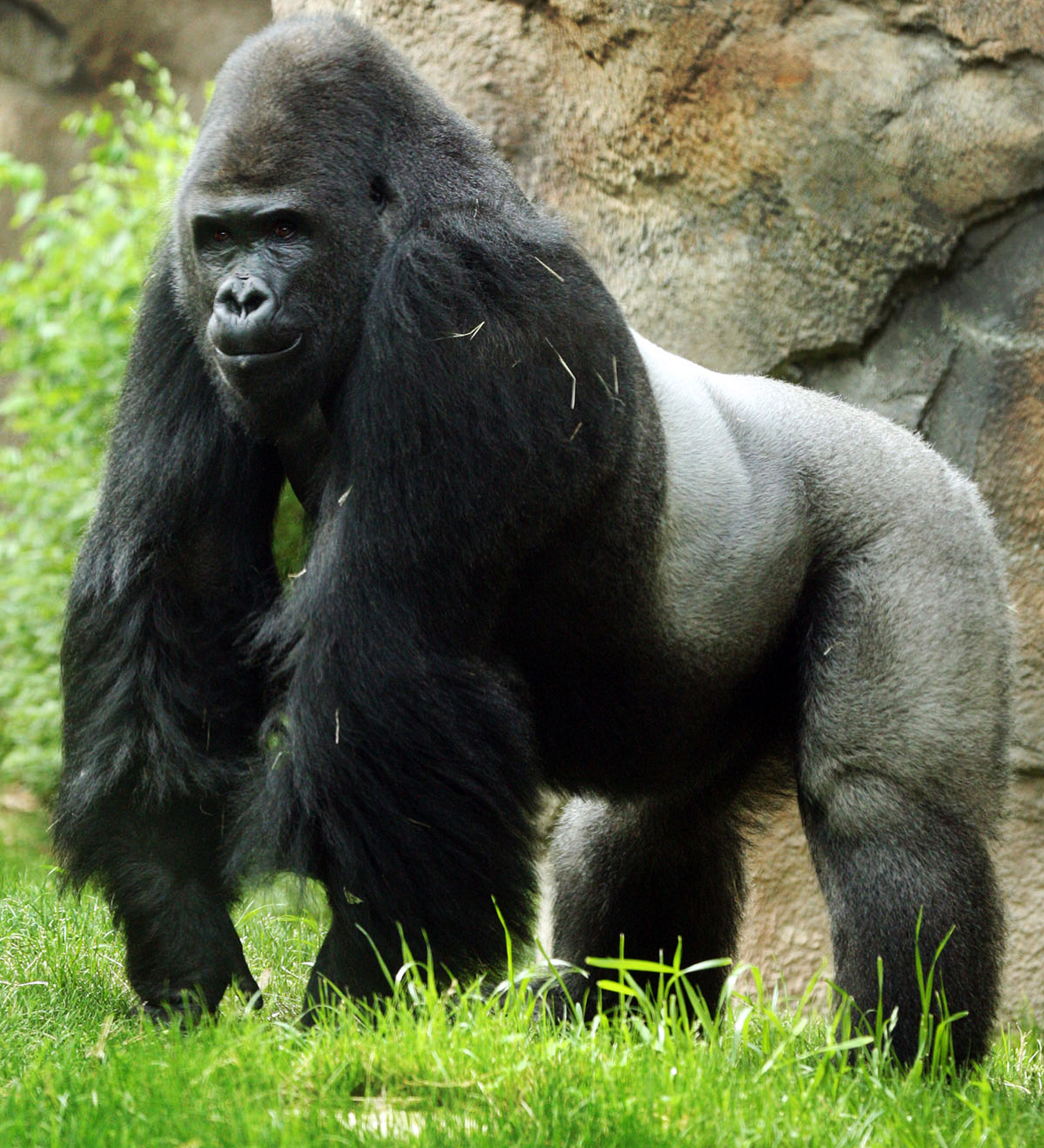 Patrick at the Dallas Zoo

Last week the Dallas Zoo announced that it was shipping one of its largest, most popular residents to the Riverbanks Zoo and Gardens in Columbia, South Carolina.

Patrick, a 430-pound silverback male gorilla who has lived in Dallas for 18 of his 23 years, just doesn't like the company of other gorillas. He's underscored his preference for solitude by nipping or biting the females. The Riverbanks Zoo has a reputation for helping in cases like this and Patrick will move there soon.

The media always likes a good ape story, and Patrick's is no exception. "'Sexist' gorilla being kicked out of Dallas Zoo," wrote the New York Daily News; "Male Dallas Zoo gorilla to get therapy for sexist attitude," claimed Reuters.

Can a gorilla be sexist?

Male gorillas, it's true, are twice as big and heavy as females and, as I've seen in my own studies of these apes in captivity, they boss around the females. Labeling them as "sexist" reminds me of claims, sometimes even in the academic literature, that orangutan males "rape" orangutan females. Just as with gorillas, orangutan males are much bigger than the females; unlike gorillas, they sometimes physically restrain a female and mate with her even as she cries out and struggles.

But I'm uneasy with using words like "sexist" and "rape" to describe situations like these. Why is that? If I'm ready to say that other animals express "grief," even "love," why balk now at using human terms?

Here's my answer: for the most part we're dealing with actions taken by men against women and these actions occur within, and are enabled by, uniquely human cultural systems of power and oppression. Patrick and his orangutan male counterparts may indeed act badly toward females, yet they aren't willfully choosing to inflict harm or violence as an expression of institutionalized male dominance.

Earlier this week, I asked two feminist scholars for their views on this matter (without expressing my own thoughts to them).

Erin Tarver, a professor of philosophy at Oxford College of Emory University, sent me this response via email on Tuesday:

First of all, when we look at the non-human world through gender-colored-glasses, which is what we do when we describe it using gendered language, it's hardly a shock that we "see" our own gender patterns everywhere. Second, these kinds of perceptions can end up justifying bad social practices. Once we believe that male domination is just natural, it's a very small step to believing that it's inevitable—and, for some people, that it's divinely ordained or otherwise meant to be.

In other words, talking about Patrick the sexist gorilla or rape-prone orangutans isn't doing our species any favors, because it may imply that sexism and rape are hard-wired into our behavior and hard or impossible to change. Nancy Gray, a colleague and a professor of English and women's studies at the College of William and Mary, underscored this point in an email also sent on Tuesday:

What it comes down to for me is a deep wariness of and attention to the human factor in defining animal behavior. Yes, we can observe. Yes, we can correct for possible bias in what we observe and what we conclude about it. But if Marx was right that we think only those thoughts that are thinkable in our time, then we might do well to consider how the discourses of our time shape what counts as real or meaningful, and what truths are delivered to us as a result.

That's beautifully put. What truths are delivered to us as a result of the language we use in talking about our closest evolutionary cousins? The truth I would like to convey is that male-to-female aggression and sexual violence is neither natural nor inevitable, as the more peaceable and egalitarian bonobos tell us.

As for Patrick? Kudos to the Dallas Zoo for wanting the best for him. Hand-reared as an infant, he is having a harder time than most in mastering the basics of gorilla etiquette. He's no sexist, though. I wish him luck in South Carolina.