Accessibility links
Scientist = Geek Is A Dangerous Equation : 13.7: Cosmos And Culture Do we need to diversify perceptions of science? Or should we "coolify" stereotypes of geeky scientists? Can we do both? Commentator Tania Lombrozo considers what contemporary psychology can tell us about the implications of each approach.

Scientist = Geek Is A Dangerous Equation

Scientist = Geek Is A Dangerous Equation 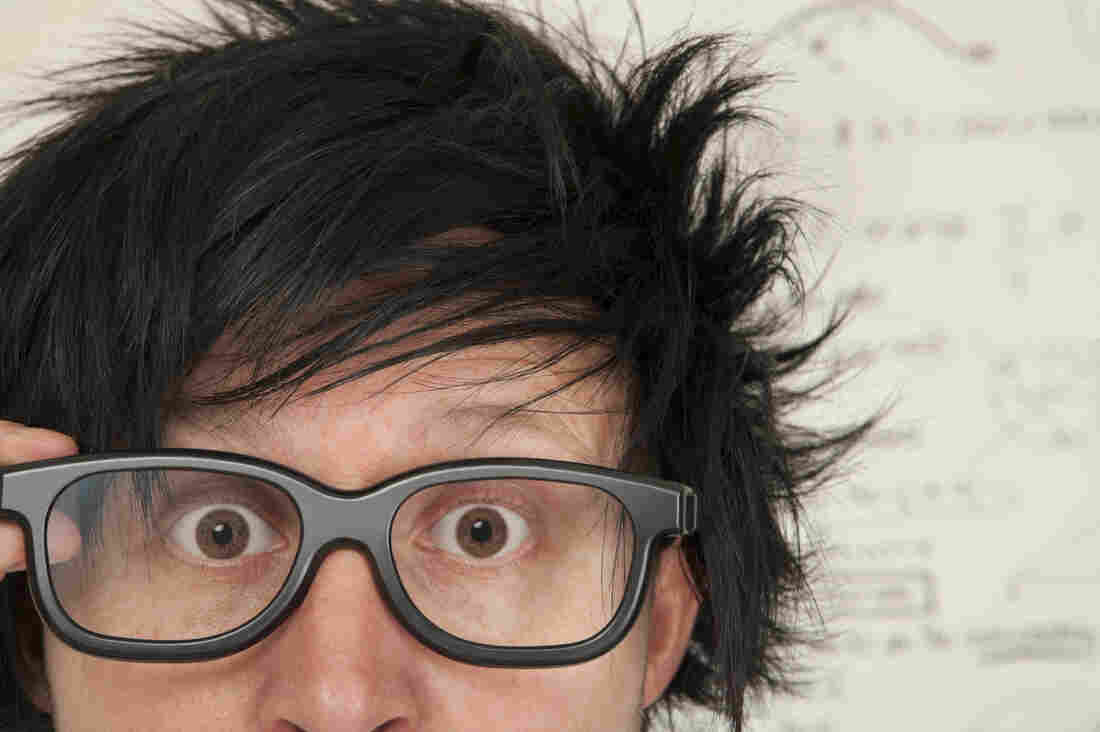 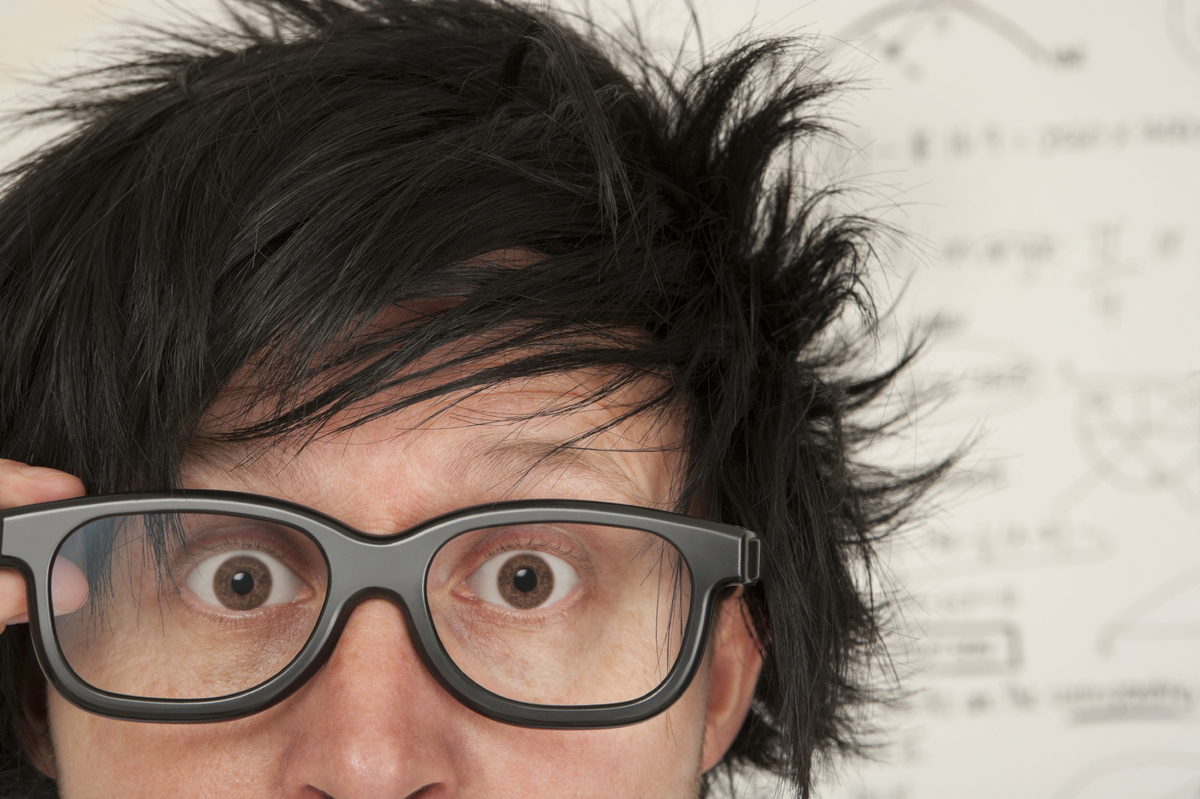 There are nerdy scientists. But there are also really cool ones, too. Some scientists ride motorcycles (hey, I do), love surfing and play electric guitar. We are a diversified group, just like doctors, lawyers and park rangers. Some are atheists, others religious (let's not go there today); some love baseball, others hockey; some are conservative, others lean left; some are very deep thinkers, others are pragmatic, down-to-earth people. Generalizations are a weak form of description and are no more applicable to scientists than to other large groups of people.

I was struck by one particular strand of comments from readers, nicely expressed here by jh:

jh isn't alone in hoping to coolify nerdiness. The "nerd pride" movement began in the 1990s at MIT, with a 1993 article in the New York Times helpfully explaining:

While outsiders use the word nerd in a derogatory sense, at M.I.T. the generally accepted definition is someone interested in absolutely everything, except dress.

Beginning in 2006, some declared May 25th "Geek Pride Day," in part because it commemorates the release of the first Star Wars movie. (You can read up on the nuances of "nerd" versus "geek" at this CNN post from Geek Out!)

Sometimes it seems like geekiness has gone all but mainstream, what with comic-based movies making big bucks, The Big Bang Theory on national television, Silicon Valley success stories recited with reverence, and – yes – even Computer Engineer Barbie, released in 2010 (who, contra the MIT definition, does seem to care about dress: her candy-pink laptop and smartphone perfectly match her glasses and shoes, as well as the seams of her form-fitting top).

There's a preconceived idea of what a 'geek' should look like, and if you don't fit that mould, people accuse you of faking it.

When Elise Andrew, the force behind I ----ing Love Science (the most popular science page on Facebook), revealed that she is a woman, the ensuing comments exposed how widely her sex and appearance deviated from expectations:

"OMFG! You are a beautiful GIRL!!! I admit I never expected you to be a girl and on top of that a beautiful one. My sincere apologies."

The idea of a female nerd isn't exactly an oxymoron (television provides us with plenty of charmless examples), but let's face it: the stereotypical specimen is a young white male with thick glasses, strong opinions about operating systems and a collection of Star Wars figurines. If that's what we immediately associate with science – whether or not it's an accurate portrayal of actual scientists – then coolifying nerdiness might be attractive for those who fit the mold, but could inadvertently steer away from science those who don't.

Unfortunately, that's what research increasingly suggests: stereotypes about different professions can create subtle barriers to entry, broadcasting a signal about who does and doesn't belong. 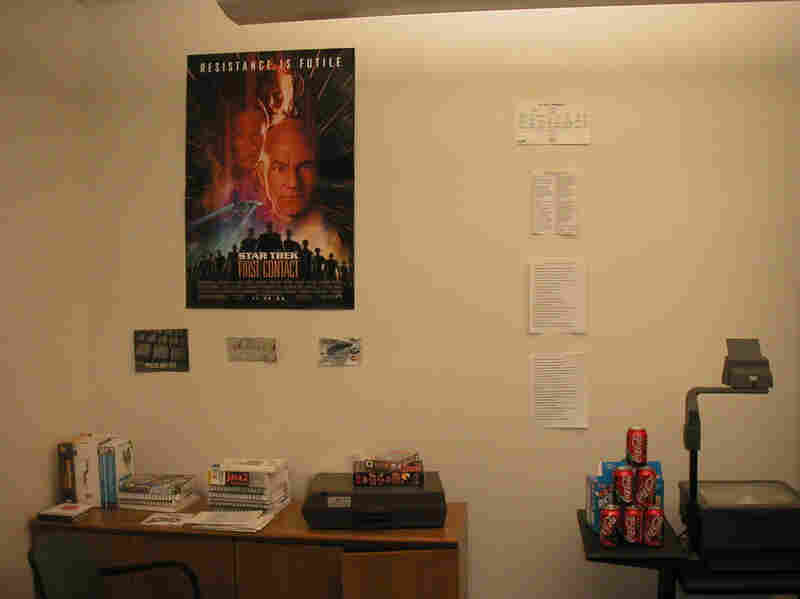 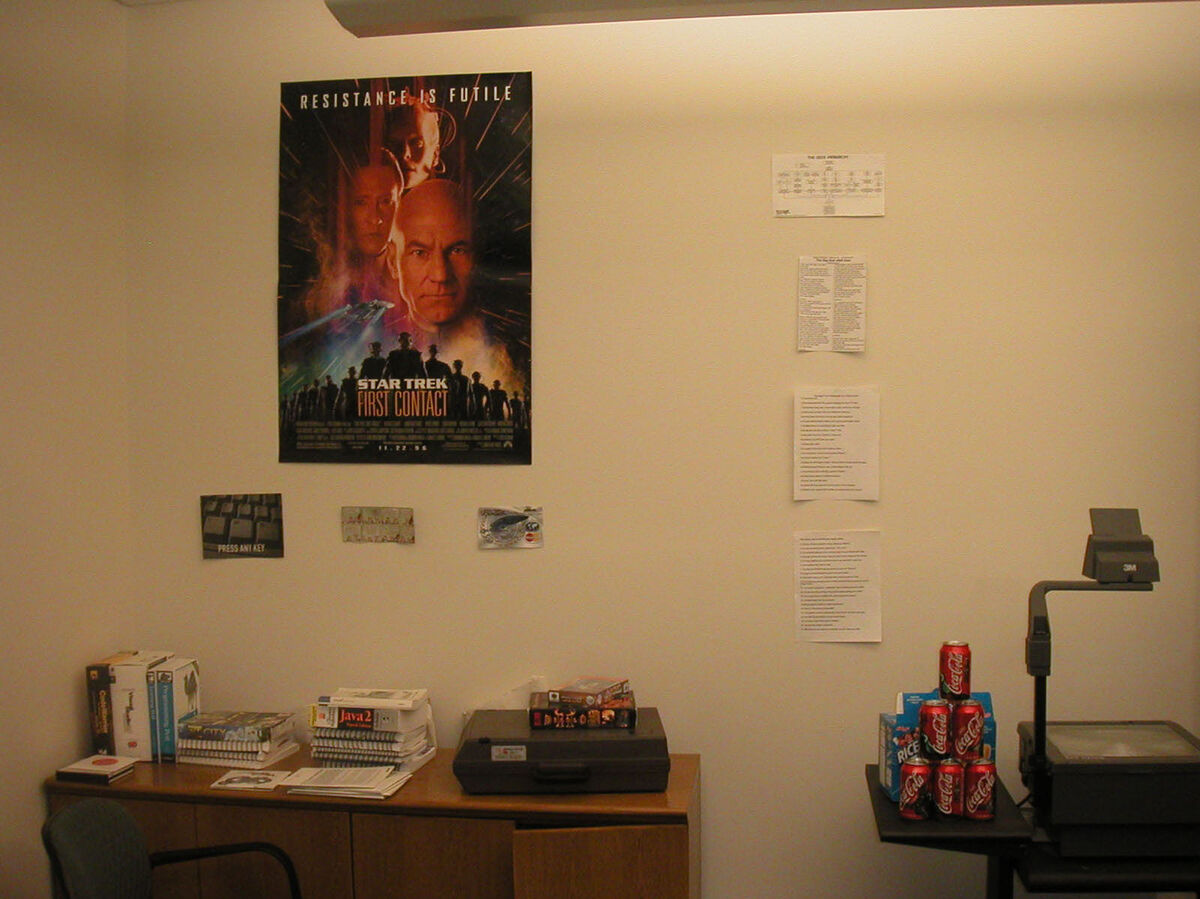 Image of the "geeky" room used in studies by Sapna Cheryan and colleagues (2009). 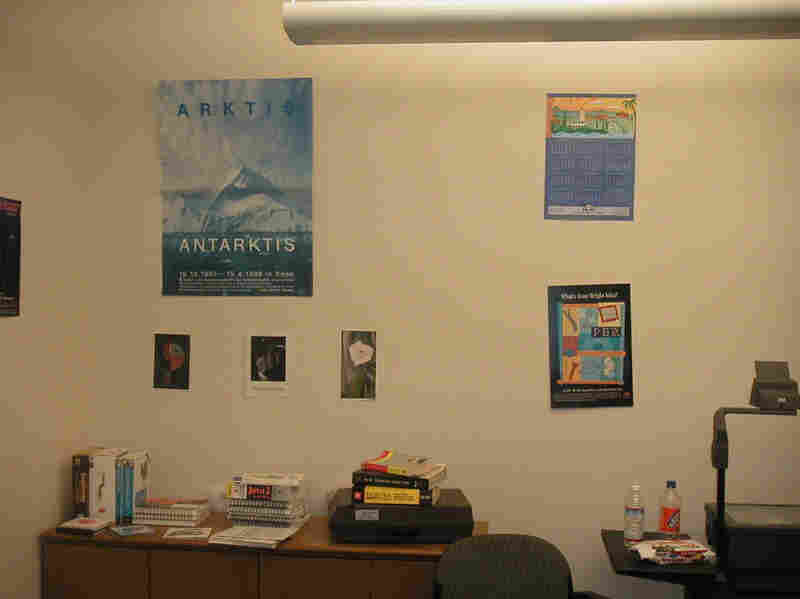 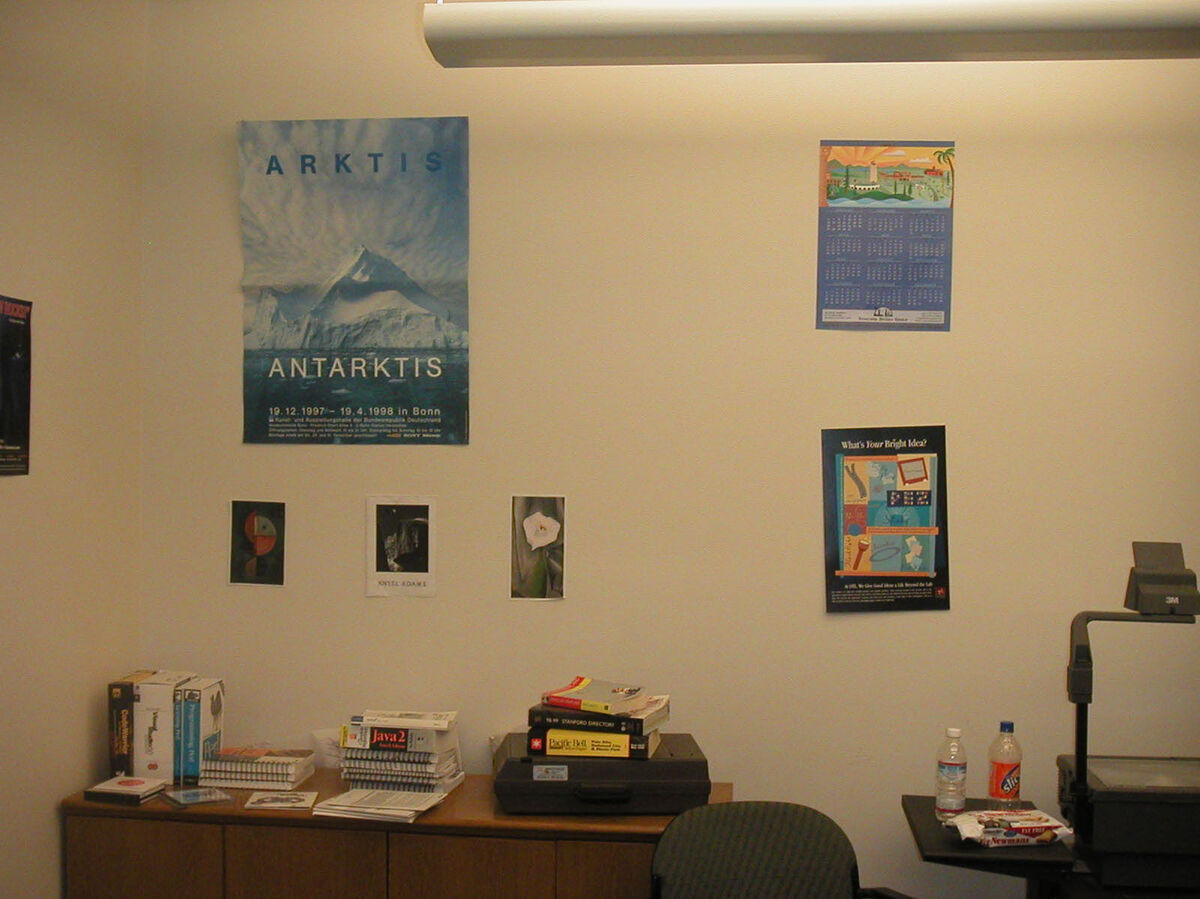 Image of the "neutral" room used in studies by Sapna Cheryan and colleagues (2009).

Environments can act like gatekeepers by preventing people who do not feel they fit into those environments from ever considering membership in the associated groups.

So might a more inclusive portrayal of science – one that includes a few well-dressed and socially astute women, for example – draw more people to science than a "coolified" depiction of stereotypical nerdiness? A second study published earlier this year, and summarized at the Wall Street Journal, suggests it just might.

Sapna Cheryan, Victoria Plaut, Caitlin Handron and Lauren Hudson presented undergraduate students with one of two fake news stories. One story – with key excerpts below – argued that computer science continues to be dominated by geeks:

A recent study...found a full third of computer science majors describe themselves as 'geeks,' a number similar to the one obtained several years ago.

...it is not difficult to "walk around campus and pick out the students on their way to the computer science department.

The first image of a computer science major that pops into minds is still that of a pasty, willowy student in a dorky shirt, face hidden behind bangs and glasses.

The second story, which was read by different students, instead argued that computer science is no longer dominated by geeks:

A recent study...found that only a third of computer science majors describe themselves as 'geeks,' a significant decline from even a few years ago.

...it is not difficult to walk around campus and see a variety of students on their way to the computer science department.

The first image of a computer science major that pops into mind might no longer be a pasty, willowy student in a dorky shirt, face hidden behind bangs and glasses.

In a word association game, 'Computer Scientist = Geek' no longer.

Professor Victoria Plaut, a collaborator on both studies as well as a colleague of mine here at UC Berkeley, was kind enough to discuss this line of research with me by email. Importantly, Plaut noted that "male" stereotypes aren't just a product of an environment that's numerically dominated by men:

We've been surprised by just how powerful the computer science stereotypes are above and beyond the actual number of women in a given setting. Even when the setting is gender balanced, stereotypes still depress women's participation. On the flip side, even when the numbers of women are low, neutralizing the stereotype inspires women's participation. That's not to say that numbers don't matter, but the optimistic lesson here is that there's a lot we can do to recruit women, even when it appears to be an uphill battle.

Plaut also emphasized that women's attrition from fields like computer science is unlikely to result from poor performance:

One finding I have found noteworthy in other research is that women are not dropping out because they can't compete academically. ­ The women who leak out of the pipeline often perform just as well, if not better, than men in the courses that serve as gateways to the major.

Women's competitive performance underscores the value of understanding and changing the subtle social influences that keep women and other underrepresented groups away from STEM fields – both to provide fair access to those fields and to maximize the talent pool. To quote Plaut, the take-home message is simple:

Diversify the image of the field.

Unfortunately, doing so isn't so easy. But fortunately, it need not be at odds with "coolifying nerdiness." In Plaut's words:

Diversifying a field doesn't necessarily conflict with embracing nerd pride – as long as a field isn't portrayed as consisting only of that group. Our findings don't suggest that geekiness itself is a problem. It's only an issue if it it's seen as overlapping significantly with the identities of people in the field. So, if, for example, the main characters of a TV show are all scientists and they're all portrayed as geeky, then the message is a stereotypical one that, according to our research, will continue to turn women away.

So, in the end, Marcelo's call for cool scientists may be just what we need, provided the notion of "cool" is an inclusive one. Beyond Marcelo's examples of scientists who ride motorcycles, enjoy surfing and play electric guitar, we need our share of engineers who like fashion, physicists who like baking and chemists who dance Salsa, to list just a few.

When I asked Marcelo what he thought about these findings and the public perception of science and scientists, he had some additional suggestions:

The interesting thing is that many of the scientists of all fields engaged in the public understanding of science are really cool individuals. Perhaps people should pay more attention to them and less to how TV shows and movies portray scientists. After all, they are the real thing!

What we could add to this mix is the need to show how cool science itself is; that to dedicate a lifetime to understanding the mysteries of nature and of human nature is to embrace an important message, one that Tom Stoppard made clear in his play Arcadia: "It's wanting to know that makes us matter."

And somewhere in the diverse body of science there should still be plenty of room for "traditional" geeks, who can wear their Doctor Who socks with pride.