Accessibility links
A Messy Sort of Gratitude: Giving Thanks For Radiation : 13.7: Cosmos And Culture Pure gratitude for the love in our lives is part of a joyous Thanksgiving. Alongside this feeling, commentator and cancer patient Barbara J. King experiences a more complicated species of thankfulness as she rejoices in, and battles fears about, her radiation therapy.

Those of us who were schoolchildren in the 1950s and 1960s remember duck-and-cover drills: in our classrooms, we practiced dropping under our desks in order to protect ourselves in case a nuclear bomb went off.

That experience left me (and a few million others) with a deep unease about radiation, an internal alarm that has continued to clang straight through to today. Events like the Fukushima nuclear disaster have done nothing to quiet the ringing.

Yet when offered as part of oncology medicine in fractionated doses, radiation may be life-saving or life-prolonging. And so today I am feeling thankful, in a complicated sort of way, for being irradiated. 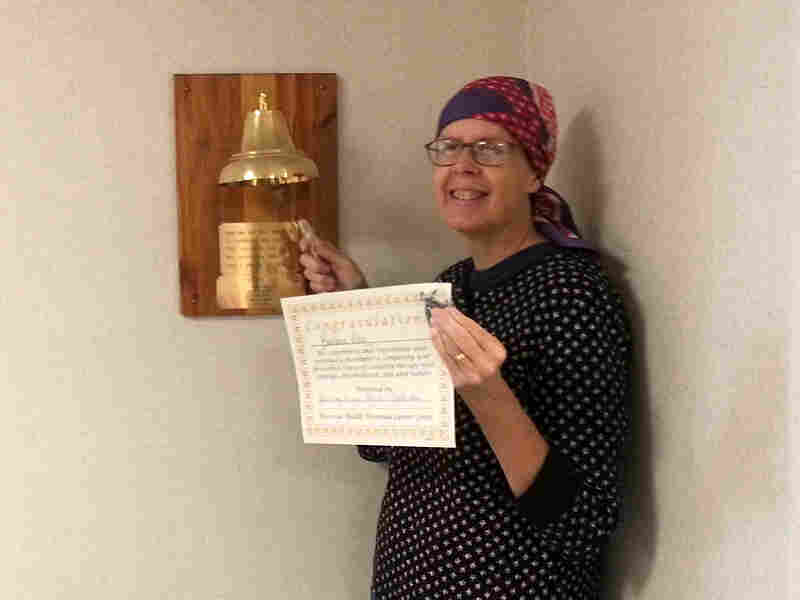 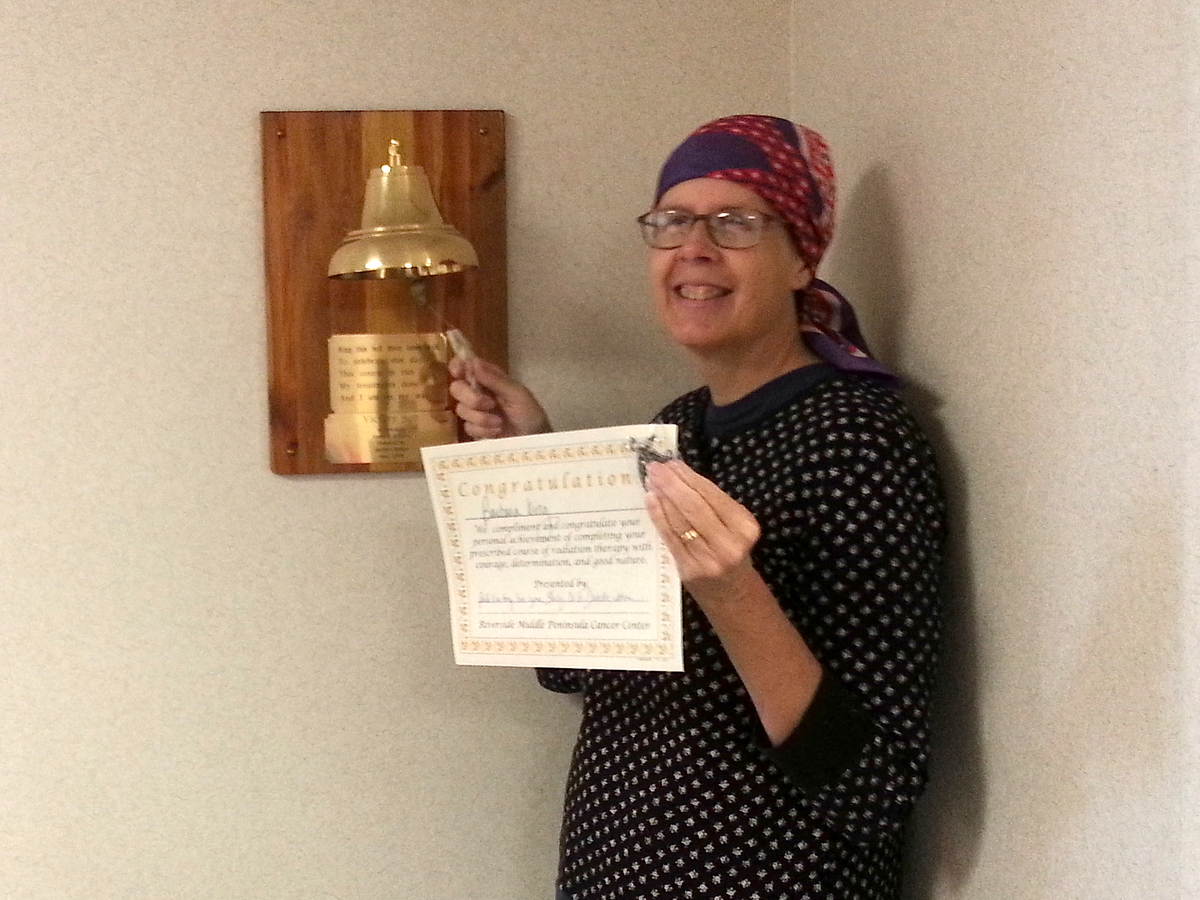 Barbara King rings the "victory bell" and holds up a certificate celebrating her completion of 25 external radiation treatments.

On November 7, I completed a series of 28 doses of radiation that began back in September. Twenty five of these were delivered by four external beams from a massive machine that rotated around targeted points on my pelvic region while I lay prone in a radiation oncology suite. The final three — brachytherapy — involved insertion of a thick cylinder containing iridium 192 into my body.

This treatment is standard for uterine cancer. Together with extensive robot-assisted surgery back in May and chemotherapy still in progress, it gives me an excellent prognosis for recovery.

This intensive, and expensive, response to a life-threatening malignancy is sadly not available to everyone around the world. Why, then, should my gratitude be complicated?

Radiation for me was sandwiched in between two sets of three chemo cycles each. I emerged from the first half of chemotherapy a bit battered — those chemicals are strong stuff. As hard and as anxious as some of those days were, because the chemo doses were three weeks apart I had time to recover each time. And at no point did I feel really frightened.

All that changed with radiation.

It started out well enough. For a science-oriented person, there's much about radiation oncology that's fascinating. Physicists on my medical team explained to me how the daily dosage is precisely calibrated and how the internal radiation treatment takes into account iridium 192's half-life. And the science continues to advance. A newer form of treatment, intensity-modulated radiation therapy, targets the region of the tumor more directly, sparing more of the surrounding healthy tissue.

But as the 28 doses began to accumulate, I began to sicken, and to care little about the science.

There was no period of recovery after each dose as with chemo. The schedule required me to take external-beam treatment five days a week for five weeks and then, after a short break, the three internal doses over eight days. As the weeks wore on, I became unhelpfully obsessed with reading about my side effects — acute radiation enteritis, for one — and about problems that might develop later.

And so began a battle between what I knew and what I feared.

I knew that being irradiated was the best thing for me. My treatment regime is statistically well-tolerated and its unpleasant side effects are vastly preferable to the metastasis of cancer cells.

And yet ... that old childhood worry lodged itself in my head, the one where my family and my friends' families in the New Jersey suburbs would suddenly become surrounded by, engulfed by, invisible harm — by radiation. Yes, I know my 2013 brain was engaged in pushing apples right up against oranges. But when radiation is making you sick and then sicker, it's not always possible to banish every last mental ghost.

Despite the skill and kindness of my oncology team, over and over again I had to summon the will to climb back up onto the external-beam table or allow the internal-radiation cylinder to slide into my body.

Those treatments are behind me now. After a month or so of radiation-induced intestinal trauma, I am venturing back into feeling-good territory. On Monday, part two of chemo will begin for me.

And so on this Thanksgiving I'm suffused with thankfulness for the people in my life — family, friends, colleagues, doctors, nurses and technicians — whose goodness and love have meant everything to me.

Alongside that pure feeling sits something else, something messier. The fear is still there, because we don't yet know about possible long-term effects of radiation on my body. But, in a new and certain way, I understand now that fear is no barrier to hope — or to gratitude.