Accessibility links
On Failing To Spot Gibberish : 13.7: Cosmos And Culture The case of Thamsanqa Jantjie, the "fake" sign-language interpreter at the Mandela memorial, raises lots of interesting questions, says commentator Alva Noë, including some about our perception of language. 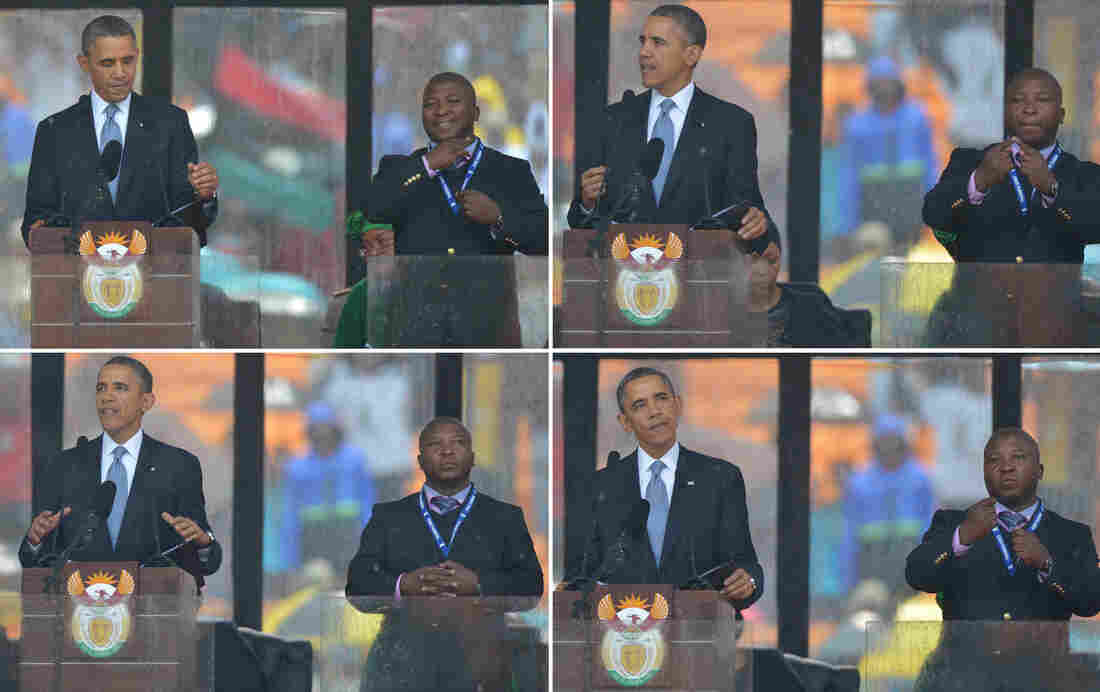 President Barack Obama speaks at Nelson Mandela's memorial service in Johannesburg. Standing to his right, Thamsanqa Jantjie gestures as if he is interpreting the speech for the deaf community. Alexander Joe/AFP/Getty Images hide caption

My first reaction to the news that the sign interpreter on the platform with world dignitaries at the Mandela memorial was a fake — he was not interpreting; nor was he signing; he was just pretending to do so — was that I must have accidentally clicked onto a story in The Onion.

But then I wondered whether the whole thing might be some elaborate piece of subversive political commentary: interpret what politicians are saying and what you get is, well, nonsense. (This is roughly what Slavoj Zizek says about this case in his comment in The Guardian.)

But what really interested me in this bizarre story is the light it sheds on language as a perceptual domain.

No German speaker would ever say that Charlie Chaplin's pseudo-German speech in The Great Dictator sounds the least bit like actual German. To non-German speakers of English, however, it hits the nail on the head.

Well, not exactly. It sounds like German, to be sure. But really, it sounds like mock German. It has the look and feel of German without looking and feeling like German really. No one would be fooled.

This is the joke behind Catherine Tates' Offensive Translator. (Hat tip: Thank you Paul Franks for this link!) The joke is not in the way she succeeds in imitating the sounds of different languages. The joke is the way she recognizably fails to do so.

Artists have long been interested in mock language. As art historian Alexander Nagel has written, early Italian painting (of the 13th through the 15th centuries) is replete with representations of characters draped in garments bearing embroidered writing. Typically this writing has an Eastern flavor; it suggests language suitable for scripture, like Hebrew or Arabic; it is visibly ancient-looking and esoteric seeming. You can at once recognize these depicted scripts as writing even though there is no system of writing to which they manifestly belong. In fact, they are pseudo-scripts. Cartoon writing. They give you the look and feel without actually giving you language itself.

My thoughts turned to this when I read the news that the sign-language interpreter on the platform in Johannesburg was a fake.

How did he manage to pull that off?

Of course the answer is that he didn't pull it off. People who know South African Sign Language could see he was a fake as readily as a German would see that Charlie Chaplin wasn't speaking German.

But presumably it wasn't the signing community that was the target of his deception, just as Chaplin wasn't hoping to amuse Germans with his sketch. We — those of us who know no sign language at all — were the target audience. And it seems that most of us were duped. We were taken in by his pseudo-language.

The explanation for this would seem to be straight forward. We, the non-sign-language-using majority, are so ignorant of sign language, so insensitive to its forms and qualities, that even the most jarring inaccuracies failed to capture our notice. It takes a surfer to notice that it is painfully obvious Keanu Reeves doesn't really surf in Point Break, and if you've ever been to college, you know there is no class room like Barbara Streisand's in The Mirror Has Two Faces.

And yet, I worry, there is something different about the language case that unsettles this explanation. If there is one thing we are good at, it seems, it's telling language from non-language. Even a very young child responds differently to the sounds of speech than to the mute sounds of squeaky hinges and clattering dishes. We are sensitive to meaning and intent, it seems, long before we understand who says what and why. Wouldn't this general sensitivity to the meaningful carry over to the case of sign language? After all, isn't sign language language, however different the medium?

I put this question to Teresa Blankmeyer Burke, who is a deaf philosopher at Gallaudet University, the world's only liberal arts university for deaf and hard of hearing people. Her thinking about sign language, the case of the fake interpreter and other matters related to the deaf and the hearing and the way we make sense of each other, is rich and developed. I hope to be able to return to a discussion of her ideas in this location in coming weeks. But her view on the matter at stake here is simple: modality matters. That is, whether language is spoken or signed limits our experience of language.

Any competent speaker can recognize pseudo speech with little effort. And any competent signer is similarly able to spot signed gibberish in a flash. But crossing over modalities is another matter altogether. When it comes to sign language and non-signers, ignorance, and inability to discriminate, is nearly boundless.

Which brings us to the question: how could a person with no apparent expertise in South African Sign Language appear as a sign interpreter at such an important event? At least part of the explanation, it seems, is that experienced speakers of SASL were not the ones making the hiring decisions! Which is remarkable in itself.