Accessibility links
The Anthropology Of Walking : 13.7: Cosmos And Culture Are you walking enough for good health? Commentator Barbara J. King knows she isn't. But fresh research into the walking patterns of humans is motivating her to get out and walk more in 2014. 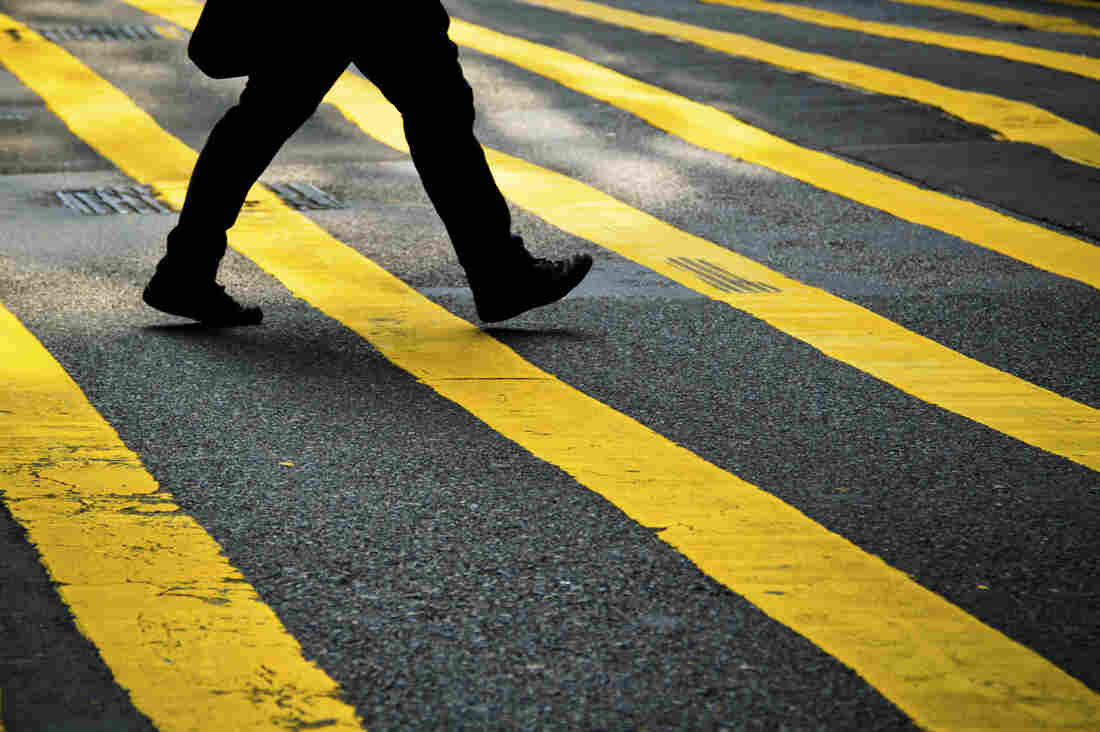 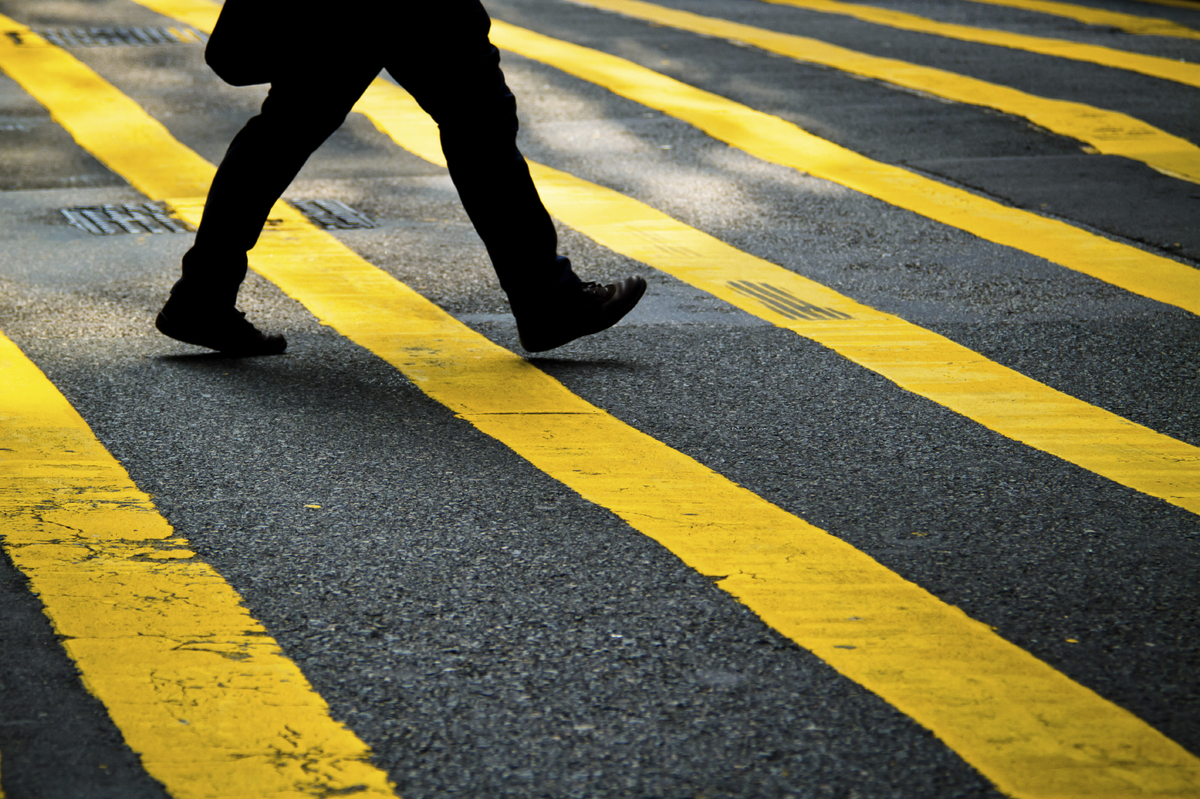 Catching up on my journal reading over Christmas break, I came across a study by an international team of anthropologists which points to a fascinating pattern in how humans move across the landscape. Whether foraging for food in Tanzania or walking from Space Mountain to the Pirates of the Caribbean ride in Disney World, we tend to adopt what's called a Lévy walk, a type of random walk where groups of short step lengths are interspersed with longer movements.

Reading this article at the turn of the year meant that my interest in the anthropology of human behavior crashed up against my own reflections on what I want to accomplish over the next 12 months. As a person whose work is largely sedentary — writing, reading and teaching — I know that this year I have to start taking more seriously the abundant data pointing to the physical and cognitive benefits of sustained exercise.

In short, I have to find ways to move. (Yes, these ways are incredibly easy to think up; it's the daily, weekly and monthly follow-through where I run into problems.)

In my first 13.7 post of the year, then, I'd like first to unpack the conclusions of the Hadza study. Then I'll take up how Hadza lifeways might help us think through ways in which patterned human behavior might — and in other ways shouldn't — affect the choices we make for ourselves in 2014.

Anthropologist Raichlen and his team collected movement data on the Hadza, hunter-gatherers who use bows and arrows, digging sticks and axes as they forage for animal prey, underground tubers, berries and other food items. Unlike some other hunter-gatherer groups, the Hadza do not practice agriculture.

Forty-four people from two Hadza camps agreed, at the anthropologists' request, to wear GPS units as they foraged. In a total of 342 foraging bouts, the primary pattern of movement for both men and women was the Lévy walk.

Raichlen and his co-authors describe this form of locomotion as a "superdiffusive, scale-free movement pattern" in which "the rare long steps minimize oversampling a given patch and take organisms to new food patches without requiring memory or high levels of cognition."

There we have it, one big reason why this research is interesting: Hadza foragers, along with other humans "the most cognitively complex foragers on Earth" as Raichlen et al. put it, move across the landscape in the same way that other organisms, ranging from honeybees to monkeys and sharks, move.

Previous research showed that when people navigate through Disney World, we adopt the Lévy pattern, as we do also on college campuses, in New York City and, presumably, in other locations.

Raichlen and co-authors consequently emphasize that it seems to be a human rather than a Hadza trait to adopt Lévy-walk patterns. They note:

There is little evidence that local environment drives the presence of the Lévy walk patterns. Significant differences in the foods that the Hadza subjects brought back to each camp do not lead to large intercamp differences in use of Lévy walks.

In fact, they underscore the Hadza pattern as a pointer to a style of moving with both universality and time-depth:

Our results suggest that scale-invariant, superdiffusive movement profiles are a fundamental feature of human landscape use, regardless of the physical or cultural environment, and may have played an important role in the evolution of human mobility. Given the adoption of a hunting and gathering lifestyle nearly 2 million years ago in human ancestors, Lévy walk foraging is likely a key element of human prehistory. Superdiffusive foraging may have allowed hominins, such as Homo erectus, to explore the larger home ranges reconstructed for these early hunter-gatherers.

As always, we need to take care with this kind of argument.

It's poor science to imply that the Hadza, or any contemporary hunter-gatherers, are somehow throwback humans that give us special insight into human prehistory. And I do not mean that Raichlen's team is making this specious argument. When I contacted Raichlen by email last week, he clearly rested their argument on a broader base than the Hadza pattern alone:

This movement pattern seems to emerge in both hunting and gathering and urban societies, suggesting it is a feature of human movement that links us to an ancient way of life.

Instead, I bring up the "hunter-gatherer as throwback" argument because it's too easy to misinterpret research like Raichlen's in those terms — and because, as I noted in a post last year about Jared Diamond, even some writers who should know better still make that disturbing mistake.

Alright, so we have good evidence for the Lévy walk as a robust human pattern. Yet when I say that this article kicked me into reflecting on making changes in my own movement patterns in 2014, I don't mean I intend to consciously adopt a Lévy walk pattern as I navigate the sidewalks of my town.

Instead, this article pushed me to reflect anew on our understanding that the hunting-and-gathering context in which we evolved required lots of walking.

This statement pushes us right back to not using contemporary peoples as stand-ins for our ancestors. David Raichen told me by email that, on average, the GPS-wearing women in his Hadza study walk about 3.5 miles per day and the men walk about 7 miles each day. These figures reflect the Hadza's modern lives, full stop. They reflect a way of life that in the 21st century requires walking, in a way that urban or suburban life elsewhere may, or may not.

I'm one in that "may not" category. Averages aren't all that helpful in this context. But it's interesting to note that, according to one study, Americans take 5,117 steps a day, a distance of approximately 2.5 miles. That's a significant shortfall compared to the averages in Western Australia (9,695), Switzerland (9,650) and Japan (7,168).

I'm not happy to admit it, but I don't even walk 2.5 miles a day, much less the longer distances more typical of other countries. Sure, I take nature walks and city walks, ride my bicycle and use the elliptical machine, but these efforts are sporadic. This is something entirely within my power to change. While I admire mega-walkers like Paul Salopek, who is doing a seven-year, around-the-world journey, or William Helmreich, who walked 6,000 miles while exploring the five boroughs of New York City, my own goals are more modest. On a daily basis, I want to sit significantly less and move significantly more in 2014.

When it comes to sustained walking over time and our health, it does matter for the choices we make today that we evolved in a hunting-and-gathering context. Foraging and its associated expenditure of energy from walking across the landscape is part of our evolutionary niche. Evolutionary biologist Daniel Lieberman focuses, in a related argument, on endurance running as part of that niche.

I've argued before here at 13.7 that, just because we ate meat as hunter-gatherers in the past and hunter-gatherers still eat meat now, there's no necessity for all of us to eat meat today. For those of us fortunate enough to have dietary choices available, minimizing meat intake — or avoiding meat altogether — may be an inviting option, one in line with principles of animal welfare. We can get from vegetarian or vegan foods the nutritional equivalents of what meat provides (in some cases with a vitamin B-12 supplement).

But there's no substitute for sustained physical activity.

It's good science, and good common sense, to be wary of appeals to our past when devising plans for dietary and health choices. But when it comes to walking — in a Lévy superdiffusive pattern or just garden-variety forward motion — we would do well to incorporate evolutionary thinking into our planning for the new year.

You can keep up with what Barbara is thinking on Twitter: @bjkingape