Accessibility links
The Ghosts Of Physics : 13.7: Cosmos And Culture All anyone ever wants to talk about is the Higgs boson. But a new book by astrophysicist Ray Jayawardhana tells the story of a ghostly particle with at least as much to recommend it: the neutrino. Adam Frank says it's an entertaining tale that will captivate scientist and amateur alike.

The Ghosts Of Physics

The Ghosts Of Physics 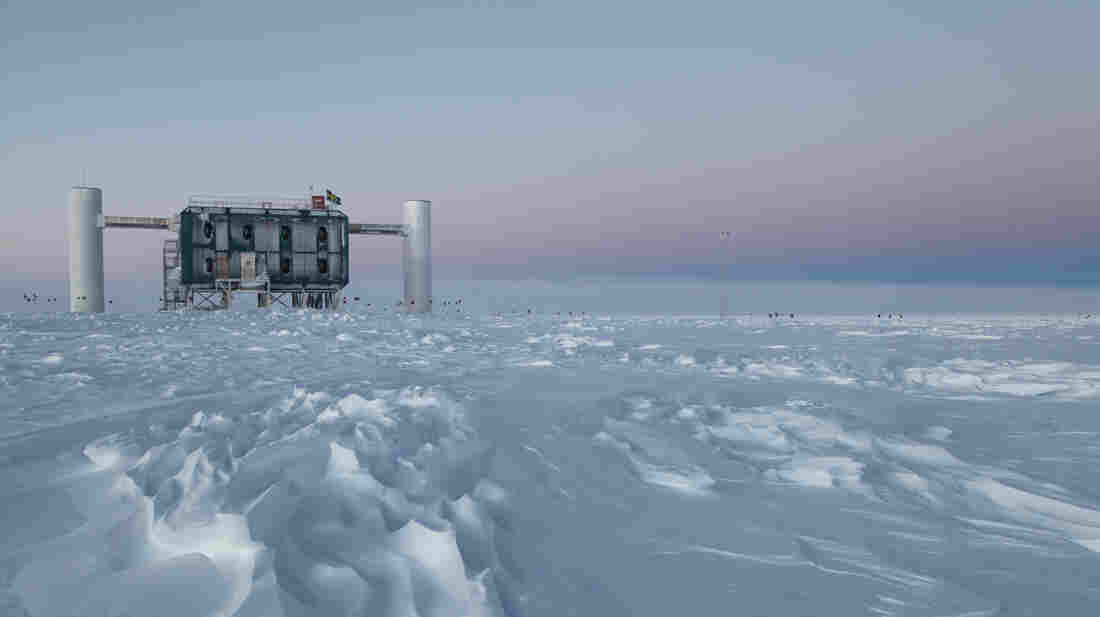 The IceCube observatory at the South Pole looks for neutrinos from the most violent astrophysical sources, like exploding stars. NSF/Xinhua/Landov hide caption 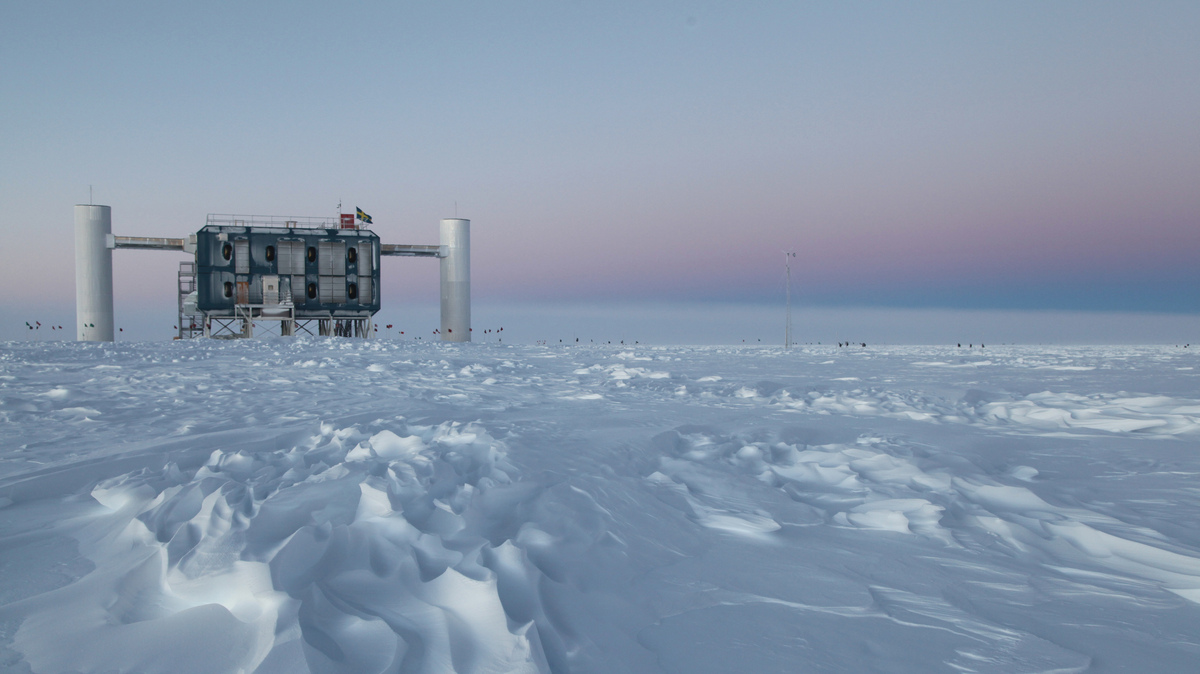 The IceCube observatory at the South Pole looks for neutrinos from the most violent astrophysical sources, like exploding stars.

Right now, as you are reading these very words, trillions of particles called neutrinos are streaming through your body. Hardly a single atom in your body feels their passage. Hardly one of the trillion neutrinos feels your presence. They are ghosts to you as you are to them. But that doesn't mean these tiny flecks of matter don't matter.

Neutrinos, it turns out, have shaped the universe and their remarkable story has now been expertly told in a new book by astrophysicist Ray Jayawardhana. It's called Neutrino Hunters. 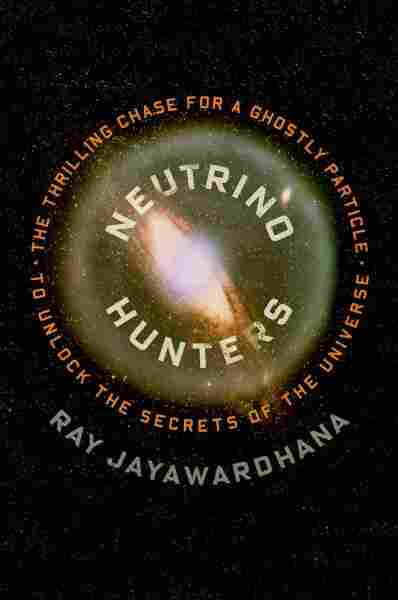 Neutrinos rarely get the press they deserve. Writers love to wax breathless about Higgs Bosons, antimatter, hypothetical thingies like tachyons (faster-than-light particles) and, of course, whatever makes up Dark Matter. But the ghostly neutrino turns out to be essential to everything from the physics of the early universe to the fusion reactions that keep the sun burning to the supernovas that light up the cosmos.

More importantly, the story of their discovery constitutes a tour of the last century's most interesting ideas and people in physics. Professor Jayawardhana, with skills as both a story teller and explicator of difficult science, is more than up to the task as a tour guide. (Full disclosure: I have met Jayawardhana a number of times in professional settings; we both work in the domains of star and planet formation.)

The story of the neutrino begins with scientists in the first decades of the 20th century studying beta decay, where a radioactive element spits out an electron (or an anti-electron) changing into another element in the process (i.e., an atom of carbon turns into one of nitrogen).

This nuclear transmogrification was freaky enough by itself. But detailed studies soon showed that energy did not seem to be conserved in the process. Since physicists consider the conservation of energy to be an untouchable principle, this aspect of beta decay had researchers panicking.

This is where Wolfgang Pauli, one of the first of Jayawardhana's more colorful players, enters the story. Pauli was a man of extremes, prone to bouts of hard drinking and poor choices in women. He was also one of the most brilliant physicists of the 20th century. It was Pauli, in a letter to his colleagues that began "Dear Radioactive Ladies and Gentlemen" who proposed that energy was conserved in beta decay via a new particle that carried no electric charge. At the time every known sub-atomic particle was electrified, so Pauli's proposal of a neutral particle could justifiably be considered radical.

(A note here on names: Eventually a much heavier neutral particle was found to reside in the nucleus and was called the neutron. Pauli's particle, which was calculated to have a tiny mass was, later, called the "little neutral one" by Italian physicist Enrico Fermi, i.e., the "neutrino.")

But proposing a new particle, as Pauli did, and proving its existence are two different things. It soon became clear that one of Pauli's neutrinos could travel through astronomical distances of lead before interacting with one of its atoms. How then were they to be studied? As Jayawardhana puts it:

Neutrinos it seemed, were destined to be poltergeists, mysterious phantoms that stole energy in beta decay but otherwise remained intractable.

The detection of neutrinos represents the middle part of the book and its here that Jayawardhana is particularly effective in mixing the science and history. He introduces us to researchers like Bruno Pontecorvo, the brilliant physicist who recognized how enormous tanks of dry cleaning fluid (carbon tetrachloride) could be used to "see" the random capture of one of trillions of passing neutrinos.

Pontecorvo set the stage for much of the future neutrino work in the U.S. But he would not be around to see it. That was because Pontecorvo and his family disappeared without a trace in 1950. Five years later the left-leaning physicist turned up in the Soviet Union claiming he had left to help prevent a third world war. (Interesting factoid: His brother Gillo directed the influential anti-colonial film the Battle of Algiers.)

The book ends with well-balanced descriptions of the central role neutrinos play in modern physics, astrophysics and cosmology. As Lindley Winslow, an MIT physicist quoted in the book, puts it:

Whenever anything cool happens in the universe, neutrinos are usually involved.

Neutrinos are important enough to now be identified as the next big thing in high-energy physics after the Higgs. Rather than explore the so-called "energy frontier," where ever larger, more powerful and more expensive particle accelerators are built, physicists are now turning to the less expensive "intensity frontier." Building machines that yield huge quantities of neutrinos (that is what physicists mean by intensity) the behavior of these ghosts may be unpacked in ever greater detail.

Jayawardhana sums his subject up nicely near the end of the book,

First invoked by Wolfgang Pauli eighty years ago to dodge a crisis in quantum theory, these pathologically shy particles may herald the exciting next chapter of modern physics ...

Maybe somebody needs to break the news to the Higgs boson.