Accessibility links
Do Black Holes Exist? : 13.7: Cosmos And Culture Stephen Hawking wants to do away with black holes (as we know them) so he can save the two pillars of modern physics: general relativity and quantum mechanics. At stake is our understanding of the nature of space and time, and how matter affects, and is affected by, both. 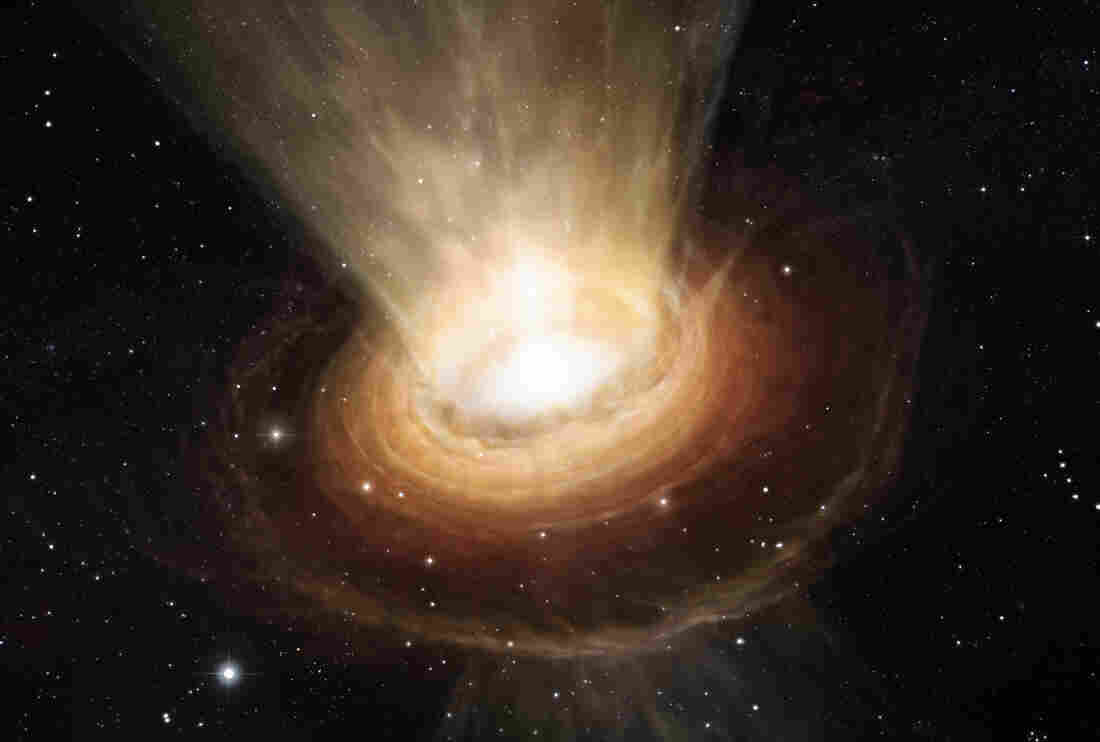 This artist's impression shows the surroundings of the supermassive black hole at the heart of the active galaxy NGC 3783 in the southern constellation of Centaurus. M. Kornmesser/ESO hide caption 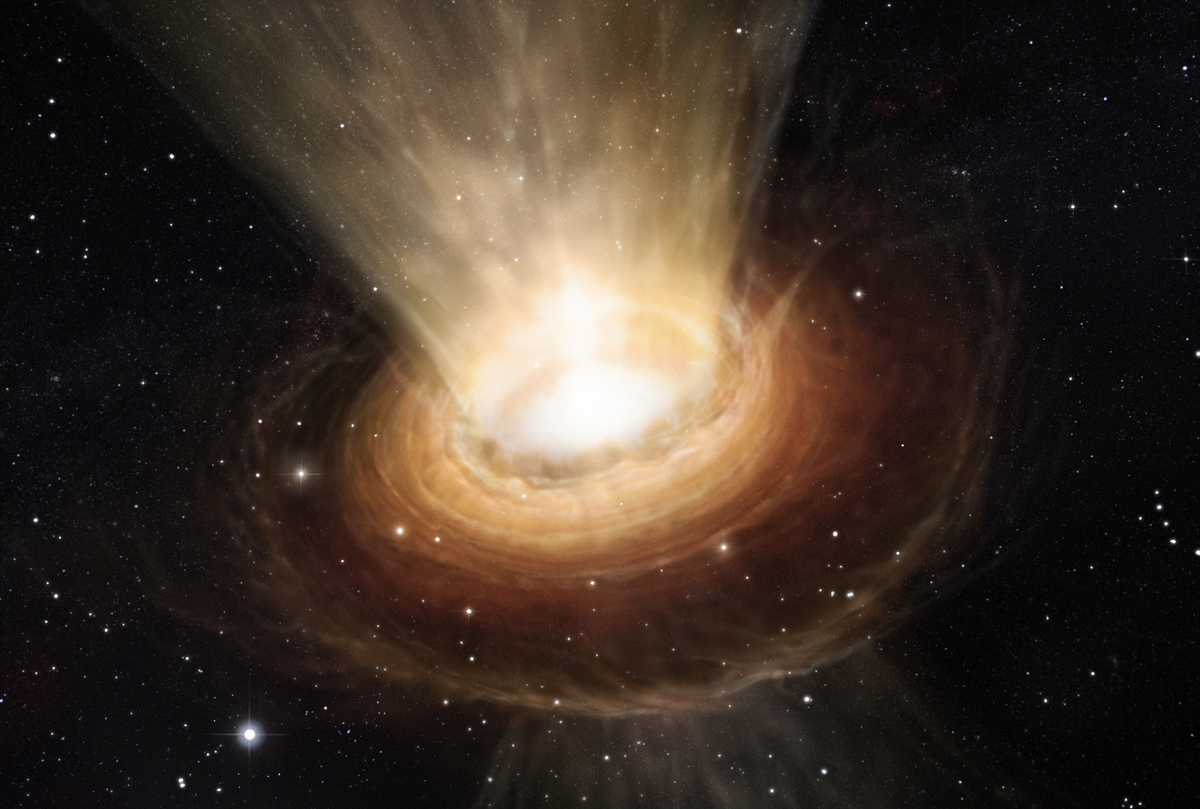 This artist's impression shows the surroundings of the supermassive black hole at the heart of the active galaxy NGC 3783 in the southern constellation of Centaurus.

Black holes are in crisis. Well, not them, but the people who think about them, theoretical physicists who try to understand the relationship between the two pillars of modern physics, general relativity and quantum physics. Judging from the current discussions, one of the two must go, at least in their present formulation. On January 22nd, Stephen Hawking posted a paper where he bluntly stated that black holes, in the sense of being objects that can trap light and everything else indefinitely, are no more. And that's a big deal.

But first things first. In essence, black holes are a region of space where gravity is so intense that not even light can escape. They are a consequence of Einstein's theory of general relativity. It describes gravity as the curvature of space (and time) around a mass: the larger the mass, the more curved space is around it. At the extreme limit of a very packed-up mass, space gets so curved that it closes up on itself, becoming a trap with no escape. At the very core of a black hole lies the "singularity," the hypothetical point where gravity becomes infinitely strong and the theory breaks down: we can't make physical sense of objects with infinite anything.

Einstein wasn't fond of black holes, thinking that something would intervene before things stop making sense. He was, after all, a big defender of realism, believing that nature is essentially sensible, if only we could make sense of it. Crazy stuff shouldn't happen; it only seems to because we don't get it right. By the way, this goes for his stance on quantum mechanics as well, as we have seen here before.

Black holes are surrounded by an event horizon, a kind of invisible membrane that marks a point of no return. If you pass beyond the event horizon your fate is set: you will go inexorably forward toward the singularity and vanish into oblivion.

There is a kind of asymmetry in black holes, a consequence of Einstein's principle of equivalence, the cornerstone of general relativity: a free-falling person doesn't feel his/her own weight. We know this from traveling in elevators. You feel lighter as they accelerate downward. You would feel weightless if the elevator accelerated to free fall. This is actually why astronauts float when in orbit: they are free falling within Earth's gravitational field. The asymmetry comes when you think of someone free falling into a black hole: he won't feel any difference as he crosses the event horizon, apart from an ever-stronger gravitational pull inward. However, if he tries to get out, he won't be able to.

At least, this is how we used to think about black holes. Things start to get messy when we bring quantum physics into the picture. In the 1970s, Stephen Hawking showed that quantum effects can cause black holes to slowly evaporate, losing their mass. As they do, their event horizon shrinks like a punctured balloon in ultra-slow motion. (This is due to a quantum effect known as pair creation: the laws of quantum physics allow for the creation of particles in curved spaces and if a particle-antiparticle pair is created right outside the event horizon there is a chance that one gets swallowed while the other escapes. When the particle gets swallowed, energy conservation forces the black hole to release energy and it gets a bit lighter.)

Two questions come to mind: If matter that falls into black holes is organized in some way so as to encode information (say, a book, a frog, your enemy) and when it escapes it's only random radiation, what happens to the original information? Is it lost? If it is, the loss of information violates quantum physics, which states that information should be conserved in such a process. Also, if black holes evaporate completely, are we left with an exposed singularity, a point in space where nothing makes sense?

The crisis forces a direct clash between relativity and quantum physics. In 2012, John Polchinski, from the Kavli Institute for Theoretical Physics (where I was a postdoc in the early 1990s) and collaborators, suggested a solution that actually made things even more mysterious: maybe the event horizon is actually a firewall, created by all the particles that evaporate from the black hole that sever their links with their sisters in the inside and get trapped by the black hole's gravity. This has to do with a quantum property called entanglement, a connection between particles so amazing that they loose their identities while entangled. To break their bond frees a bunch of energy and it is this energy that powers the firewall.

The problem is that if firewalls exist they violate the principle of equivalence, since it makes the event horizon a special place in space. If we toss the principle, Einstein's general relativity goes with it. If we toss quantum entanglement and information loss, quantum physics goes with it. The jury is still out on the firewall. Some physicists support it, while others say it makes no sense, as in "you don't see a wall popping up out of nowhere when you walk around."

In comes Hawking with a dramatic solution: maybe the event horizon doesn't really exist, only an "apparent horizon," with a more ephemeral existence. In this case, what's trapped inside may slowly leak. So, to save relativity and quantum physics Hawking wants to do away with black holes as we know them! In this case, information would still come out of the black hole, scrambled but not entirely lost.

Of course, we can't be sure of any of this, at least until (or if) a theory that brings general relativity and quantum physics together is developed. Either way, the effort is crucial. As we try to figure things out, we learn more about the nature of space and time, and what matter does to them both. We also learn a bit more about the universe and what it means to us.