Accessibility links
Smoking Simulacra : 13.7: Cosmos And Culture Sometimes a fake cigarette is real. Commentator Alva Noë on why the debate over banning electronic cigarettes turns more on the use of symbols than it does on the facts. 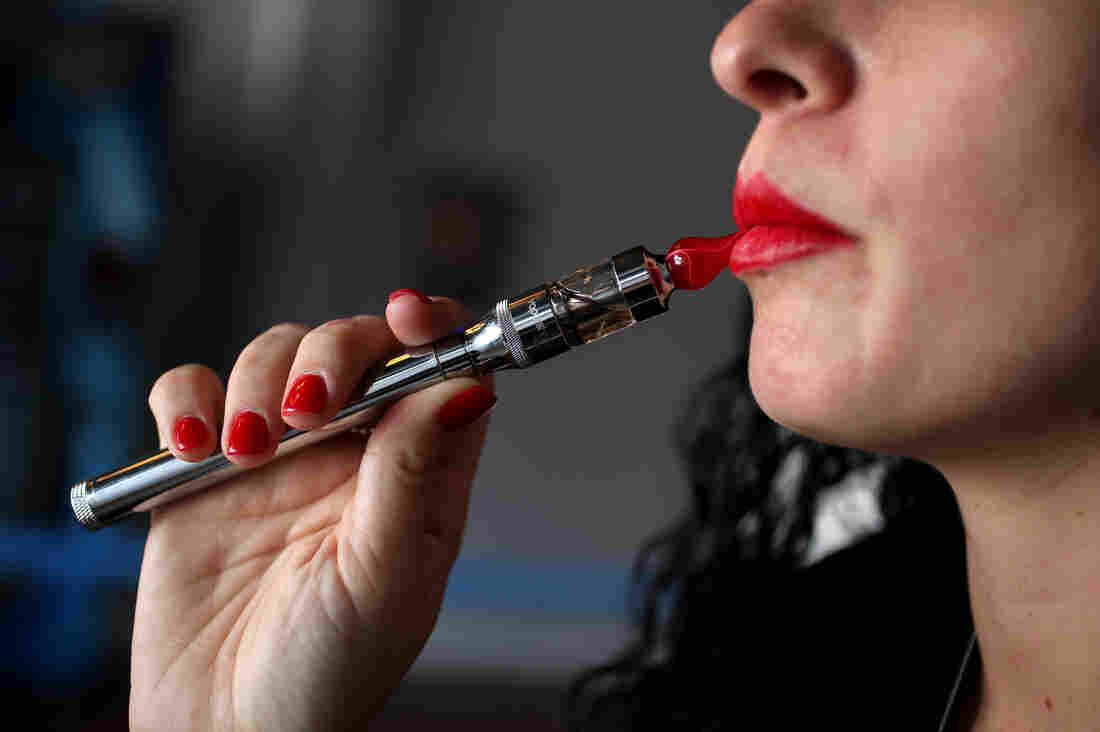 Electronic cigarettes are actually battery operated devices that use a heating element to atomize a flavored liquid, typically containing nicotine, so that it can be inhaled. Joe Raedle/Getty Images hide caption 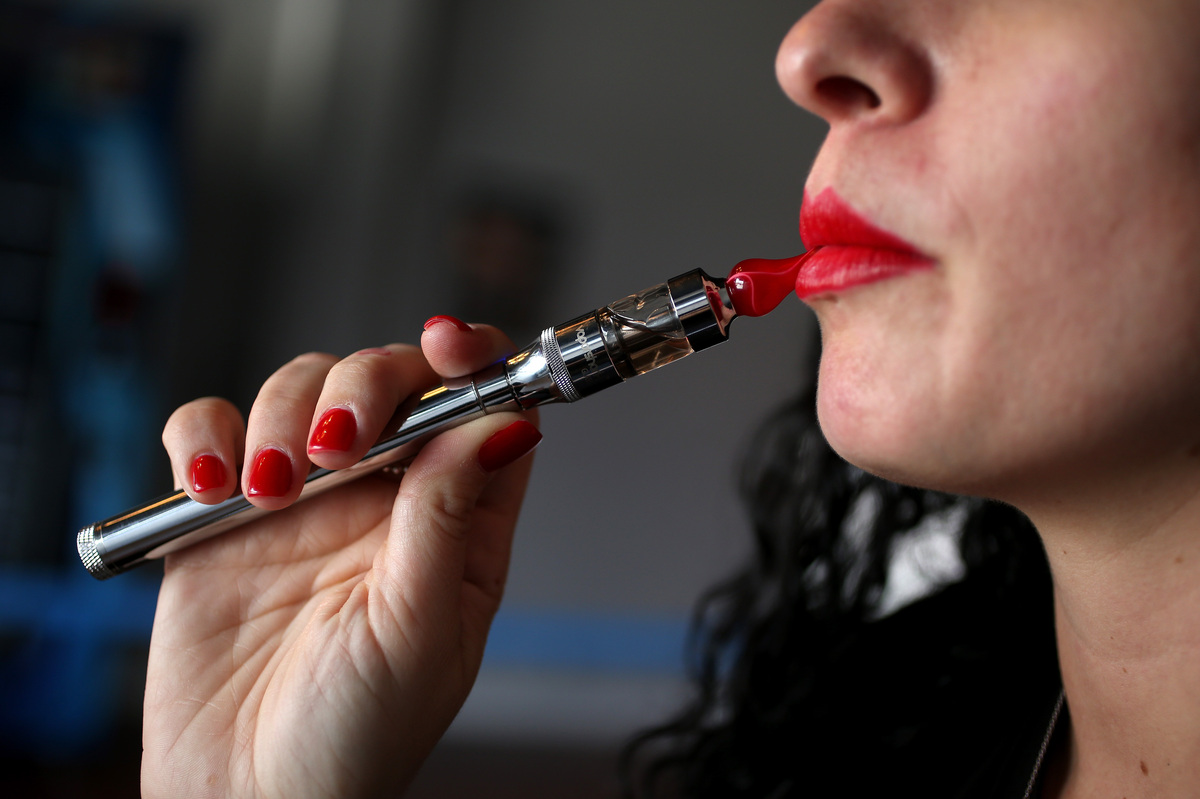 Electronic cigarettes are actually battery operated devices that use a heating element to atomize a flavored liquid, typically containing nicotine, so that it can be inhaled.

We see symbols and their power at work in the recent controversy surrounding the effort to extend bans on smoking to the electronic cigarette. An e-cigarette is no more a cigarette than a chocolate cigarette is.

But — as with the case of toy guns — this doesn't mean they are any less dangerous.

[UPDATE on Monday, Feb. 24: A number of readers have interpreted the previous paragraph to mean that toy guns are as dangerous as real ones. My actual intention was to suggest that sometimes toy guns can be dangerous too, despite the fact that they aren't real guns. Sorry for this confusion.]

Josh Moskowitz, who is director of the Center for Family and Community Health in the School of Public Health at UC Berkeley, where I work, and who is a member the committee that recently banned the use of e-cigarettes on campus, indoors and out, was quoted in the local paper:

We don't know what the long term health affects are. It's not even clear what ingredients are going into these products, and it's not clear if there is consistent, high quality manufacturing from some of these products. Usually, the ingredients are not publicly available. Rather than adopting a potentially risky product, it's safer to ban these products on the campuses as a precautionary approach.

Now, as a general rule, it's one thing to adopt something, and another to ban its use. Also, as a general rule, not having evidence that a product poses a genuine danger is a bad reason to prohibit its use. So there seem to be some steps missing in this argument for prohibition. What gives?

The missing steps are symbolic. E-cigarettes, which are actually battery-operated devices for heating nicotine into a vapor infusion that can be breathed in, look like cigarettes. But there's no tobacco smoke and no tobacco (although when you exhale you do emit something that looks like smoke; the exact chemical composition of that vapor, and whether it poses dangers to by-standers, is a matter of ongoing research). Still, they're frequently referred to as cigarettes by the manufacturers.

The controversy surrounding these devices is fueled by these facts about look and feel. If they looked like medicinal inhalers, or if the vapor exhaled were not designed to resemble smoke (as I assume that it is), there would be little to fight about. For there would be no link to cigarettes and smoking. No one argues that smoking bans should be extended to nicotine gum.

Just before outgoing Mayor Bloomberg's prohibition on "vaping" went into effect, I sat in a bar in New York with a man who, I soon realized, was "smoking" an e-cigarette. He didn't use it like a cigarette at all.

Cigarettes are held up and away from the body, usually near the face area. As the cigarette is a delicate object, it is held in a relaxed pose. And when the smoke is brought to the mouth, care is taken both that smoke from the end keeps out of the eyes, and also that the burning tip does not come into contact with hair or body. In short, the use of the cigarette is a rather complex choreography and it is governed by what cigarettes are: burning paper sticks filled with shredded leaves.

But there are no such functional constraints on the e-cigarette. It makes no burning, stinging tobacco smoke and produces no ash. It doesn't get hot enough to burn; between puffs you can just set it down on table. It's actually bulkier than a real cigarette. The reason I didn't notice the man was smoking at first was that he didn't hold it between his fingers and bring it to his face for a measured intake. Rather, he kept it clasped in his fist and dipped his face down to his clenched hand almost as if to draw from a straw, and then he proceed to suck upward with a snort.

It might be that if e-cigarettes are let into the wild, their non-cigarette nature would come increasingly to assert itself, function would drive evolutions in form and the tobacco-cigarette motif would evolve away. We may never know.

But the fact is, on both sides, symbolic benefits and symbolic dangers govern the discussion.

Anti-smoking activists have long worked hard to tarnish the appeal and glamor of the smoke. They've been trying to tear-down smoking's image. From their point of view, pretend smoking is dangerous if it does anything to make smoking seem appealing. In the trenches of the smoking propaganda wars, a smoking simulacrum is a dangerous weapon, not because it's dangerous itself or poses dangers to others, but precisely because it may not.

And on the other side, manufacturers and their shills are quick to insist that that e-cigarettes are a tool for quitting. Why? Not because they are a safer cigarette, but because they are not a cigarette at all, but rather a nicotine-delivery system that has the appearance of a cigarette. Again, the value in a simulacrum.

Should we ban e-cigarettes? Should we regulate them like tobacco products? I won't tell you what I think. (Not today!) It's probably out of our hands anyway. The prohibitionist bandwagon has a good head of steam. But the case is interesting because it invites us to realize that — when it comes to the facts — sometimes appearance is as important as reality.