Accessibility links
The Green You See Is Not The Green You See : 13.7: Cosmos And Culture Just in time for St. Patrick's Day, commentator Tania Lombrozo brings us two illusions in green. Look at them long and hard, if you dare.

St. Patrick's Day is my excuse to present you with the following illusion in green, courtesy of Akiyoshi Kitaoka, a psychology professor at Ritsumeikan University in Japan.

In this perceptual illusion, the two spirals appear to be different shades of green. In fact, they are the same. Courtesy of Akiyoshi Kitaoka hide caption

This image includes two spirals in different shades of green, one a yellowish light green and the other a darker turquoise green. Right?

At least, that's not what the pixel color values on your monitor will tell you, or what you'd find if you used a photometer to measure the distribution of lightwaves bouncing back from the green-looking regions of either spiral. In fact, the two spirals are the very same shade of green.

If you don't believe me, here's a trick to make the illusion go away: replace the yellow and blue surrounding the green segments with a uniform background. Here I've replaced the blue with black: 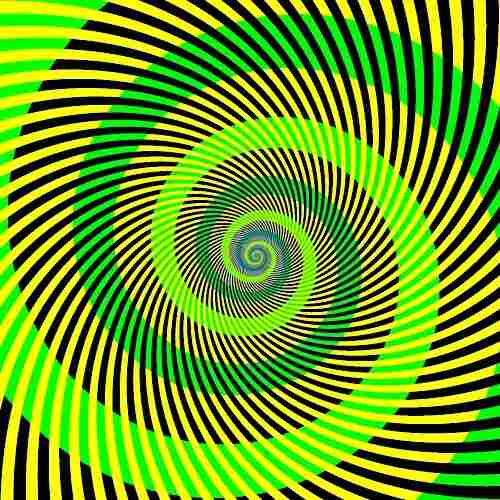 And here the yellow is gone, too: 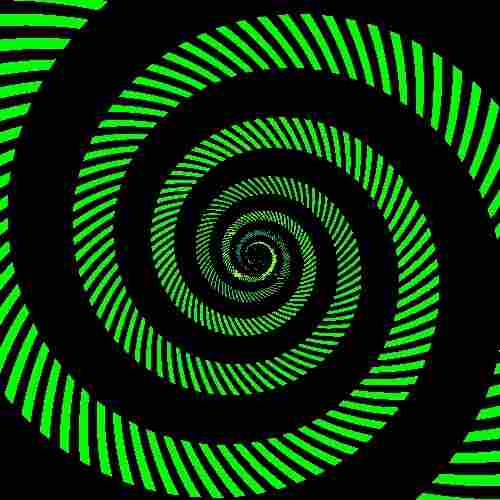 And just in case you think I've swapped the greens on you, here's a final demonstration. If you follow a single green region across a section from the original image (with yellow and blue) to a modified section (with black), you'll see that the shade of green remains the same. 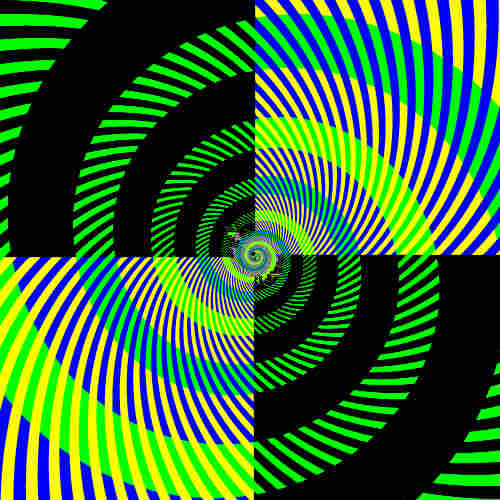 The fact that the illusion disappears when the surrounding colors are replaced with a uniform background illustrates an important feature of color perception. Our experience of color for a given region of space isn't just a consequence of the wavelengths of light reaching our retinas from that region. Instead, the context matters a lot!

When a version of this illusion first made the Internet rounds in 2009 (thanks to folks like Phil Plait over at Bad Astronomy), a few explanations were offered, including the idea that "our brain judges the color of an object by comparing it to surrounding colors" (from Richard Wiseman) or that it's a consequence of "simple downsampling" (from Dan Kaminsky). It turns out both of these ideas are partially right and that vision scientists have been studying the phenomenon for some time. (They've found, for example, that patterned backgrounds can have a larger effect on color appearance than uniform backgrounds.)

To find out more, I turned to an expert: friend and vision scientist Ben Backus, an associate professor in SUNY's College of Optometry. He kindly
explained one of the most important factors behind the illusion:

This illusion works because the visual system measures color at a coarser spatial scale than luminance (i.e., brightness). Thus the apparent color of a small object can be contaminated by the colors of neighboring objects, which is very nicely demonstrated by this illusion. When green is sandwiched between yellow it looks much yellower than when it is sandwiched between blue.

Why does the visual system do this? Basically because it can. Usually. Since there is almost always a change in luminance at the border between two objects in an image (which is why black and white photographs are interpretable), you don't need color to detect where the borders are. You can fill in the object colors after you know where the edges are, using a coarser color map.

This normally works just fine, and it allows your brain to save tremendously on wiring. Your optic nerves are already by far the thickest nerves in your body, with about a million axons coming out of each eye. They use a lot of energy transmitting the luminance information at high resolution. Why also transmit color at high-resolution if you don't have to?

Incidentally, color television signals transmit luminance information in greater detail than color, and digital cameras collect the luminance data at twice the resolution of color. This all works fine because natural images don't have sharp color borders except where they also have a sharp luminance border.

And finally, because I can't resist, one more image from Akiyoshi Kitaoka's website, an impressive variant of the peripheral drift illusion. (But first, a warning: anomalous motion illusions like this one make some people dizzy, so look away if that happens to you!)

In this perceptual illusion, regions of the image in peripheral vision appear to be in motion. In fact, the entire image is static. Courtesy of Akiyoshi Kitaoka hide caption

In this perceptual illusion, regions of the image in peripheral vision appear to be in motion. In fact, the entire image is static.