Accessibility links
'Star Trek: Voyager' Points The Way To Liberation Through Loss : 13.7: Cosmos And Culture Life's many entanglements are demanding, never more so than now. Commentator Alva Noë finds himself fantasizing about what it would be like to suddenly and unexpectedly be cut free from those ties.

'Star Trek: Voyager' Points The Way To Liberation Through Loss

'Star Trek: Voyager' Points The Way To Liberation Through Loss

I grew up with Star Trek reruns and I was an enthusiastic viewer of The Next Generation and also Deep Space Nine. But somehow I had missed Star Trek: Voyager. Until now that is. I've been working through the seven-year series streaming on the Internet.

It's so good, so different from the other Star Treks. The franchise has always been a fantasy about a better future, with clean technology and human rights and food replicators and the health and wealth and moral vision to explore strange new worlds in a search for knowledge. But it's also always been a vision of a future in which our lives are structured in almost military like power hierarchies.

Voyager breaks with all that, or tries to. The crew of the Voyager have been transported to the far reaches of the galaxy. They know where they are. But they have no way home. Or rather, it will take their whole lives to make it back. And crucially, they have no way to communicate with home. The crew knows that they will be counted for dead, presumed lost and that friends, family and lovers back home will move on with their lives. The crew of Voyager is utterly and truly alone. They are disconnected from the people and institutions that are the normal background of our lives. 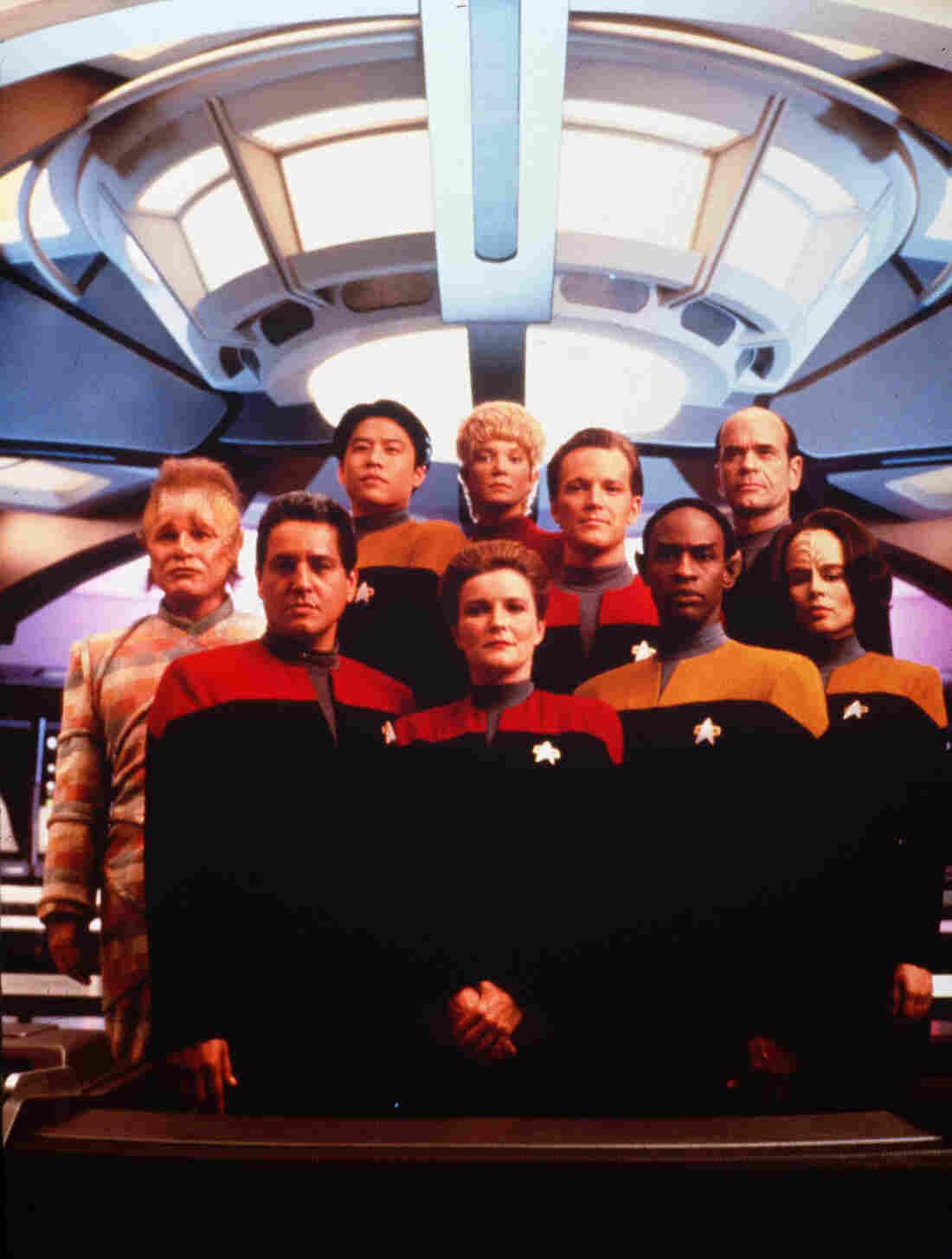 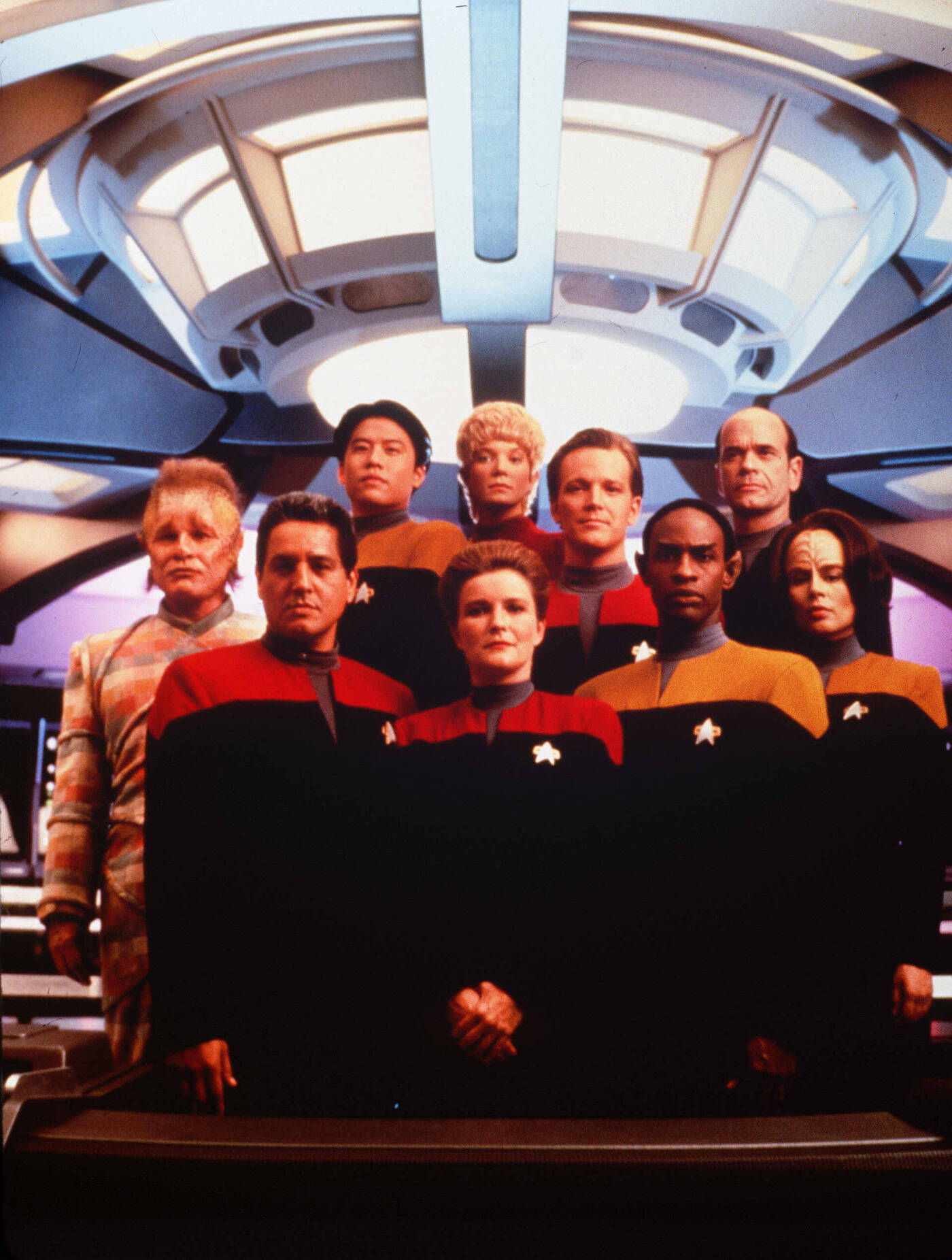 The crew of Star Trek: Voyager

So Voyager begins with the profoundest of loss and this loss is like a blanket covering every adventure and every challenge. What matters if no one I love or care about or am related to ever knows about what I do or what happens to me?

The only thing still linking the crew to home is their hope that, one day, they will return.

And so I was startled when, just having reached the middle of season four in my viewing of the series, they are able to establish a communication link to home. "You are no long alone," comes a message from Star Fleet Command. "We will not ever give up on you." And gradually a trickle of letters from loved ones begin to reach the crew of Voyager.

It turns out the link — an accident of alien technology — is short lived and before long Voyager is on its own again.

But with what a difference!

They are still a lifetime away. But they are on the books again. There are people waiting for them. Pension funds are reactivated, presumably. "Dear John" letters have been been sent and received. Life goes on aboard Voyager just as before, now with a completely different character. As the message put it, they are no longer alone. However far away in space and time, they are back in the embrace of civilization.

As viewers of Voyager, we had grieved for the crew's loss, their isolation, their existential predicament. But we also experienced their situation at some level as their liberation, freed from the control of background, family and career. To be free of the responsibility of getting innumerable messages that need answering!

The puzzle at the heart of Voyager is that the crew is cast away, lost in space, and so they are not so much set adrift as set free. As the messages from home start flowing in, I found myself fearing for the crew. To hear from loved ones, from employers, to find out the news of home, was to be found, it was to be captured.

This is a theme that's been on my mind a lot lately. I wonder if I would have viewed these episodes differently had I watched them back in the late-nineties, before the age of 24-hour email/Internet/multimedia work-play ensnarement that characterizes life today.

A colleague of mine not too long ago posted a desperate plea online: how do deal with the inundation of email? Too many messages — too many important worthwhile messages — to answer. She put out the call: Help! What's a good strategy for coping? Voyager crossed my mind.

I had similar thoughts in connection with the terrifying and tragic loss of Malaysian Airlines 370. In the early days, when there was speculation about what might have happened to the plane, I found myself privately fantasizing that maybe the passengers and crew of the plane had just absconded, freed themselves of life's incessant pressures and paralyzing entanglements and escaped to a tropical island. A large-scale conspiracy to get some peace!

I realize this is a cruel idea and I don't for a second want to minimize the terrible loss of life and the suffering of survivors. But the constant coverage of their loss kept driving this thought into my head, the thought that we are overburdened and trapped through our own connectivity.

Death is not the liberation any of us would choose. Some of us might opt for life aboard Voyager, though, if given the chance. But all of us, surely, need help balancing the complicated demands of life in the information age.

You don't need to be anti-social or irresponsible to wonder if it might be possible, just for a while, to truly log out.