Accessibility links
Tropical Beach Is No Paradise For Stray Dogs : 13.7: Cosmos And Culture Puerto Rico is home to a large number of stray dogs. Commentator Barbara J. King clues us in to the problem. 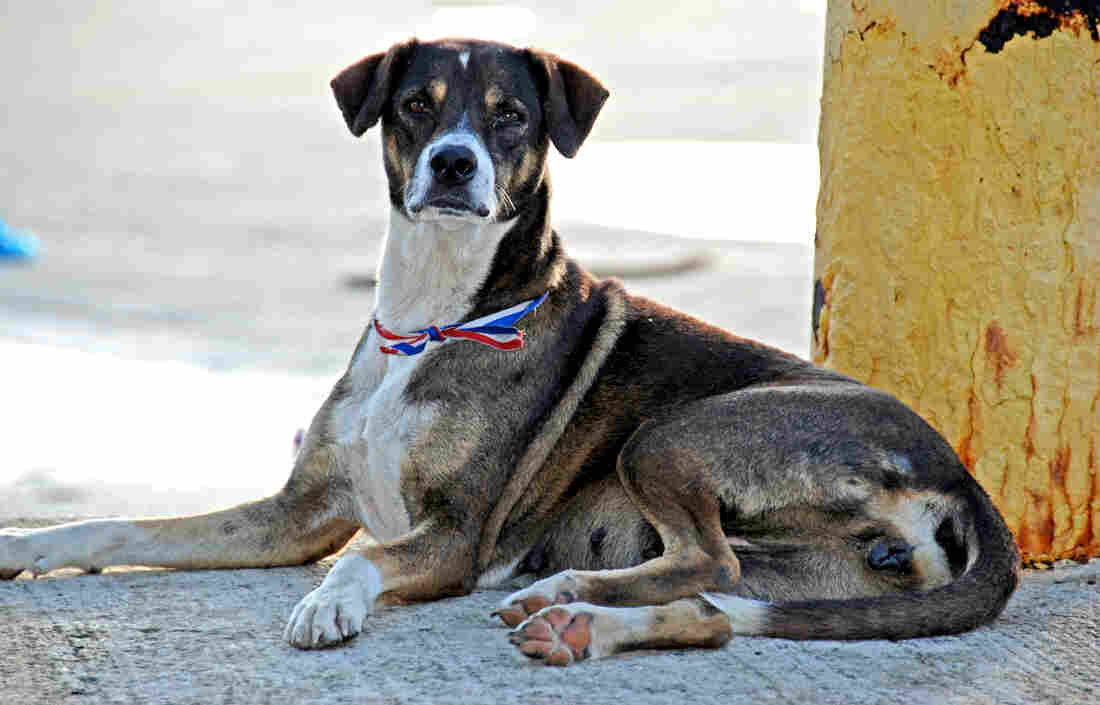 One of several free-roaming dogs who live on the beach at Punta Santiago in Puerto Rico who have formed a loose association with a group of homeless men also living on the beach. Courtesy of Adriana Pisano Beaumont hide caption 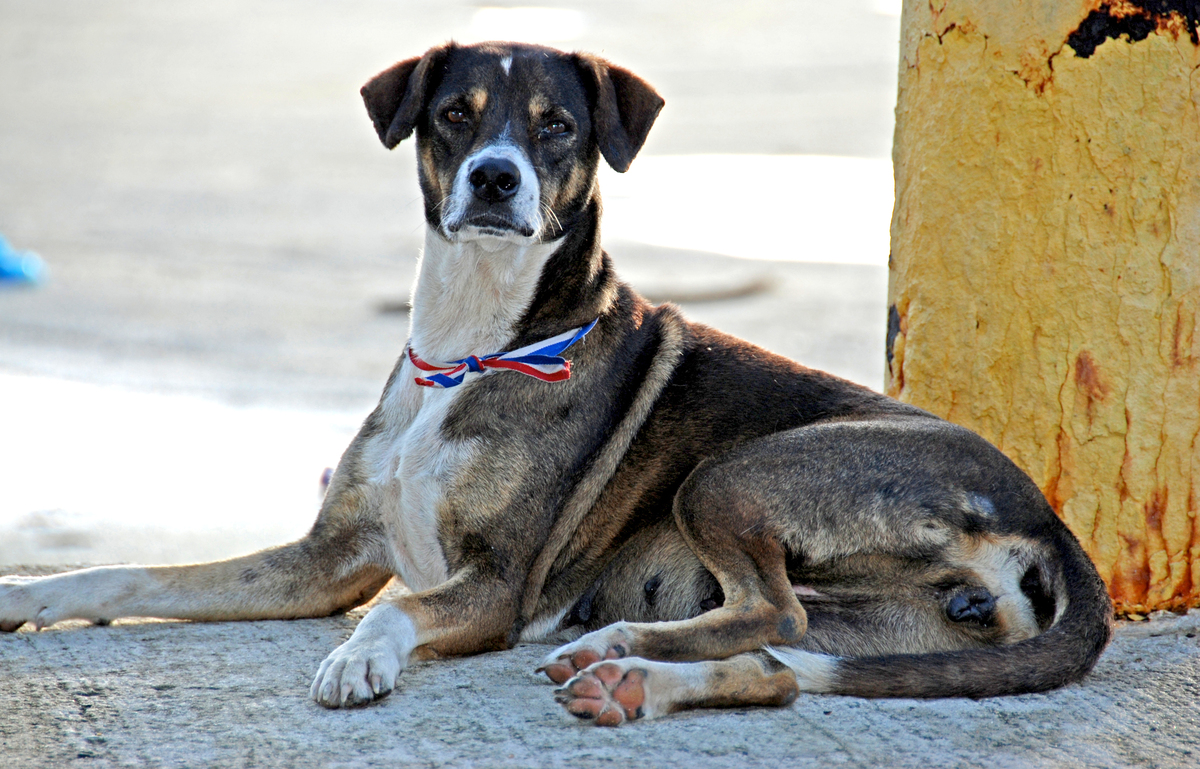 One of several free-roaming dogs who live on the beach at Punta Santiago in Puerto Rico who have formed a loose association with a group of homeless men also living on the beach.

All of us who rescue animals in trouble, or care about animal welfare, may take inspiration from our successes and triumphs. Rejoicing in the good outcomes can fortify us for when the going gets tough.

At the same time, it's important to understand and talk about the complexities and setbacks involved in rescuing animals. We must all learn to see and talk about the wonderful, beguiling, heartbreaking cows, sea turtles, chimpanzees, dogs and cats of this world as unique individuals. To cultivate this understanding in our children — and others we may mentor — opens the doors to identifying and tackling the larger issues that contribute to the suffering of other animals on this planet.

That's just what Christy Hoffman has done. Hoffman, an assistant professor of animal behavior, conservation and ecology at Canisius College in Buffalo, New York, journeyed to Puerto Rico from May 29 through June 5 with six students to learn more about the island's problem with stray dogs.

This trip to Puerto Rico was not Hoffman's first; at both the undergraduate and graduate levels of study, she carried out behavioral research on the rhesus macaques of Cayo Santiago, the "Monkey Island" off Puerto Rico's coast. Though focused on the monkeys, she became highly attuned also to Puerto Rico's stray dogs: recent estimates suggest that at least 100,000 — and perhaps as many as 1 million — dogs are homeless in this small commonwealth.

Unfortunately, dogs are rarely adopted from shelters and rescue centers in Puerto Rico.

On this summer's trip, Hoffman and her students visited some of these facilities, learned from the people in charge and volunteered themselves as short-term, shelter-dog caretakers. The most eye-opening experiences for the Canisius group came from visiting the island's beautiful beaches and encountering firsthand the numerous dogs on them.

The team was even able to send two stray dogs, Rico and Starfish, each found on the beach, back to the mainland United States for adoption. This destination is not uncommon for Puerto Rican animal rescue: during the week, the Canisius team assembled at the airport to observe as 19 stray dogs, rescued by a cluster of organizations and people led by All Sato Rescue were flown to the U.S. mainland.

Also on the beaches, the group witnessed cross-species interactions that were unfamiliar. Hoffman's student Kaitlyn Simmons described the situation in an essay:

"There were a few men who slept on the beach at night and had formed friendships of a kind with these dogs. Although these dogs were not owned or claimed by anyone, and by all rights were stray dogs, these men became their protectors at night. They slept on the beach together and the men took it upon themselves to ensure that these dogs would not be picked up by officials who were trying to clear the beaches of dogs. The dynamic of this little band of men and dogs was astounding. During the day everyone went their own way and ultimately nobody was accountable to each other, but come nightfall they formed a group for companionship and protection. I found this quite fascinating because this relationship is so unlike the human/dog relationship we are so often used to."

In corresponding by email with Hoffman and reading the essays written by her students, I was struck most forcefully by two aspects of the trip.

The hardest part for the group emotionally was having to walk away from charismatic, tail-wagging, heartbreaking stray dogs because, as is true with many animal-rescue situations, it was simply impossible to help more than a fraction in need.

And the most challenging part, strategically, was to balance a tendency to gravitate to individual dogs with the need to focus on variables that impact the entire community (including the dogs). The fact of the matter is that, although many Puerto Rican volunteers work tirelessly for these animals, progress has been slow. Many of the beach dogs were so personable (so to speak!) that it was pretty clear they had once been attached to a loving person or had lived in a loving household. Why had these dogs ended up abandoned?

Trained in anthropology as well as ecology and zoology, Hoffman got the students to consider systemic issues that impact both people and dogs, including resource availability and poverty. Hoffman explained it to me by email this way:

"For headway to be made, what is crucial to understand is that the situation requires that some individuals be able to look past the immediate needs of the dogs right in front of them and focus on figuring out where the dogs are coming from and what can be done to improve the human-dog relationship within households in Puerto Rico."

"For example, it is apparent from the animal welfare activists with whom we spoke in Puerto Rico that many people are receptive to spay/neuter voucher programs but that the demand currently greatly outpaces the available supply of these vouchers. What can be done to generate more financial support for these voucher programs? In addition, are people able to meet the basic needs of their pets (food, water and shelter)? If not, would pet food pantries help people keep their animals? Would a fundraising campaign geared toward securing dog houses and kennels or fencing help people keep their dog? How feasible is it for people to get their dogs to a vet clinic? Is there a need for more mobile vet clinics? Is there a need for training-related resources? How might humane education programs facilitate improvements in animal welfare?"

"Sorting this out and helping the dogs of Puerto Rico takes a community of people whose collective expertise ranges from helping individual dogs to helping entire communities."

I should note that no one involved in the rescue of these dogs is indifferent to the plight of the people in Puerto Rico, many of whom lack the resources to meet their own everyday needs. With this in mind, I was glad to see Puerto Rico included in a major funding initiative announced by the U.S. government in April, with monies earmarked to aid the homeless.

What I love about the Canisius project, preliminary though it is right now, is that the team consulted with local experts who guided them in how to spend their time most helpfully; made a difference for individual dogs whose lives are now changed for the better; and made good use of the "anthropology" part of anthrozoology to look in wide scope at how change in the future for people as well as dogs might be brought about at the community level, once again by close collaboration with local experts.

Isn't this an excellent model for thinking about and acting on animal-rescue issues?

The Canisius students were profoundly affected by their short time in Puerto Rico—this much was clear from their essays. Their writings underscored for me that it's not only the outright successes for animals that should inspire us, it's also collaborative efforts to get a grip on, and slowly work to shift, the reasons animals need to be rescued in the first place.

Student Jennifer Myers, in reflecting upon her week in Puerto Rico, summed it up beautifully:

"Each and every one of us has a chance to make a difference. No matter how small. The thing is, suffering is not species-specific and when one of us suffers, we all suffer."