Accessibility links
Science Vs. Religion: Beyond The Western Traditions : 13.7: Cosmos And Culture The endless debate over the relationship between science and religion in the United States ignores the thinking of much of the rest of the world, says commentator Adam Frank.

Science Vs. Religion: Beyond The Western Traditions

Science Vs. Religion: Beyond The Western Traditions 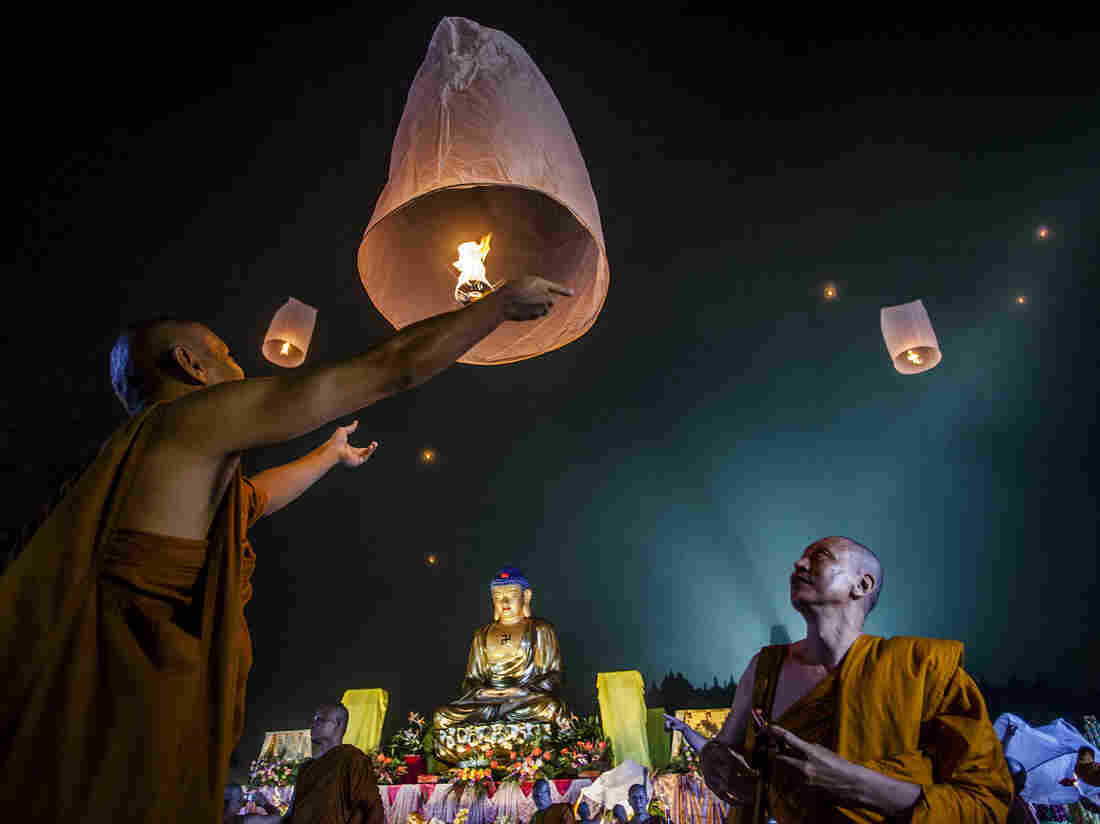 Buddhist monks release a lantern into the air at Borobudur temple in Magelang, Central Java, Indonesia. Where does their tradition fit into the science vs. religion debate? Ulet Ifansasti/Getty Images hide caption 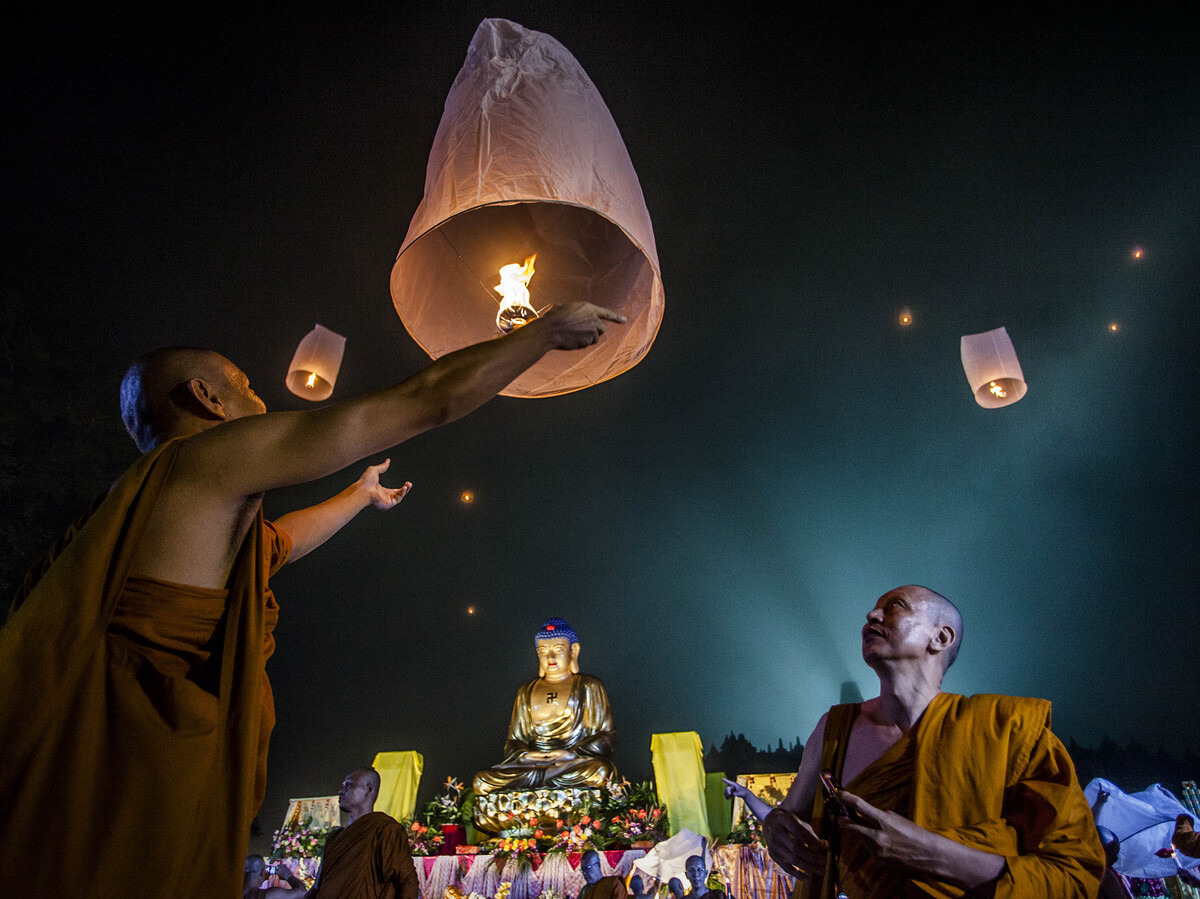 Buddhist monks release a lantern into the air at Borobudur temple in Magelang, Central Java, Indonesia. Where does their tradition fit into the science vs. religion debate?

In the United States, the debate between science and religion seems to be powered by a perpetual motion machine. The claims that Neil deGrasse Tyson's inspired Cosmos series was anti-religious stands as the latest salvo in a long battle that generates lots heat but very little light. Having been in many of these debates, both formally and informally, I'm often struck by how narrow the discussion remains. That's because often people don't want to talk about science and religion; they really want to talk about science and their religion. It's exactly in that first step that the conversation goes down hill for all sides.

When surveying the progress of world history from the end of last age onward, historian Ian Morris identified two principal geographic cores out which civilization would emerge. The first was in the fertile crescent of the Mideast and led to cultures we like to think of as "The West." The second was located in China and would serve as the nexus for the civilizations of "The East." Of course, Morris would acknowledge that things are far more complicated than this simple binary division. But it's a perspective that yields an important point for us.

With more than one civilization, there is more than one tradition of religious or spiritual thinking. That multiplicity has dramatic consequences for thinking about how we think about science and religion.

In a recent New York Times interview, Jay Garfield, a philosopher with an interest in Buddhism, tried to articulate how different the perspective of a non-western spiritual lineage could be:

"What gets called 'philosophy of religion' ... is really the philosophy of Abrahamic religion: basically, Judaism, Christianity and Islam. Most of the questions addressed in those discussions are simply irrelevant to most of the world's other religious traditions. Philosophers look at other religious traditions with the presumption that they are more or less the same, at least in outline, as the Abrahamic religions, and even fight about whether other traditions count as religions at all based upon their sharing certain features of the Abrahamic religions. That is a serious ethnocentrism that can really blind us to important phenomena."

Now, you might think avoiding such ethnocentrism is only an issue to academics. But the focus of the science vs. religion debate centers on the nature of reality and the nature of our access to that reality. That means missing non-western perspectives in the discussion shutters entirely different kinds of perspectives that are neither marginal nor insignificant. As Garfield frames it:

So without a deity, what are the Buddhist's questions? Garfield offers a partial list:

"Buddhists also worry about the relation between ordinary reality, or conventional truth, and ultimate reality. Are they the same or different? Is the world fundamentally illusory, or is it real? ... They ask about the nature of the person, and its relationship to more fundamental psychophysical processes. Stuff like that. The philosophy of religion looks different if these are taken to be some of its fundamental questions."

Hinduism also asks a different set of questions and frames those questions in a different perspective. V.V. Raman, a physicist with a long-running interest in questions of science and religion, explicitly takes this on in his essay "Science and the Spiritual Vision: The Hindu Perspective." Using the Vedantic System to describe Hindu thought, Raman says:

"What makes the Vedantic System unique is that, unlike doctrines in some other religious systems, Vedanta is not simply based on the sacredness of this book or that. The Vedantic vision is not a theology or philosophy or even metaphysics. Rather, it is a formulation of a worldview arising from a unique mode of exploration."

So why does any of this matter?

On the ground-floor level, it's something of a counter to the in-your-face folks who want to argue against evolution because religion must trump science. OK. But one might ask: "Which religion?" What about the perspectives of the 1 billion Hindus or hundreds of millions of Buddhists? Don't their perspectives count? Or are we all just waiting for them to convert? Or course, this kind of argument won't do much against any kind of fundamentalism. But it highlights how a question of cosmic import, with ties to the whole of global history, can be mistakenly reduced to one single interpretation of one single religious tradition (whichever that may be).

Taking a pluralist view of religion means both sides are forced to think about religion in its full human context: the way it evolved in response to specific cultural and historic needs and the way those needs served the "spiritual longing" of individuals within those cultures. Even if you want to reject all religious or spiritual perspectives on reality, you need to understand the breadth of those perspectives.

Note that none of this implies that one perspective has to be superior to the others in discussions of science and religion. While there is a tendency to see Buddhism, in particular, as sympathetic to modern science, Buddhist scholar Donald S. Lopez Jr. has argued in The Scientific Buddha that this is only a very modern view of that religion.

Also, since philosophy and religion were so intimately tied together in the long march of Western history, they both served as the conceptual background for the development of Western science (which is now just "science"). The emphasis on the Platonic doctrine of ideals — with its timeless domain of perfect forms — is just one example of a tap-root idea that ran from western philosophy to religious thinking and on into science (at least in my field of theoretical physics). Understanding the emphasis that other cultures brought to their philosophical/religious thinking about ultimate ideas can only serve to make the whole discussion more interesting and enlightening.

So, the next time someone wants to argue about science and religion with you, stop and make them look at the this pie chart. Tell them they'll have to randomly pick one of the world's religious traditions to argue for (or against, depending on their disposition). That ought to make the party interesting.