Accessibility links
Looking Beyond Notions Of Erotica In Prehistoric Art : 13.7: Cosmos And Culture Small statues made by our ancestors 35,000 years ago are often interpreted as sex objects or even pornography. Anthropologist Barbara J. King offers a different perspective. 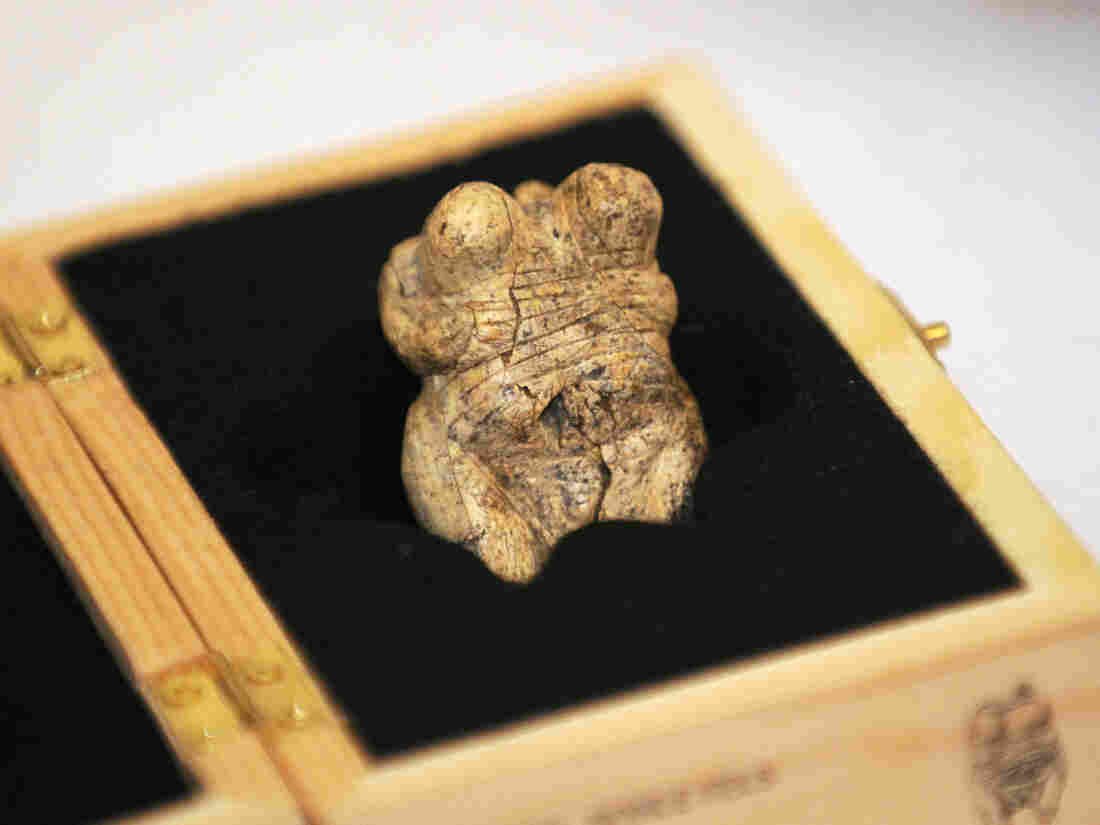 This carved ivory figurine of a woman, found in a cave in southern Germany in 2008, is estimated to be at least 35,000 years old. Daniel Maurer/AP hide caption 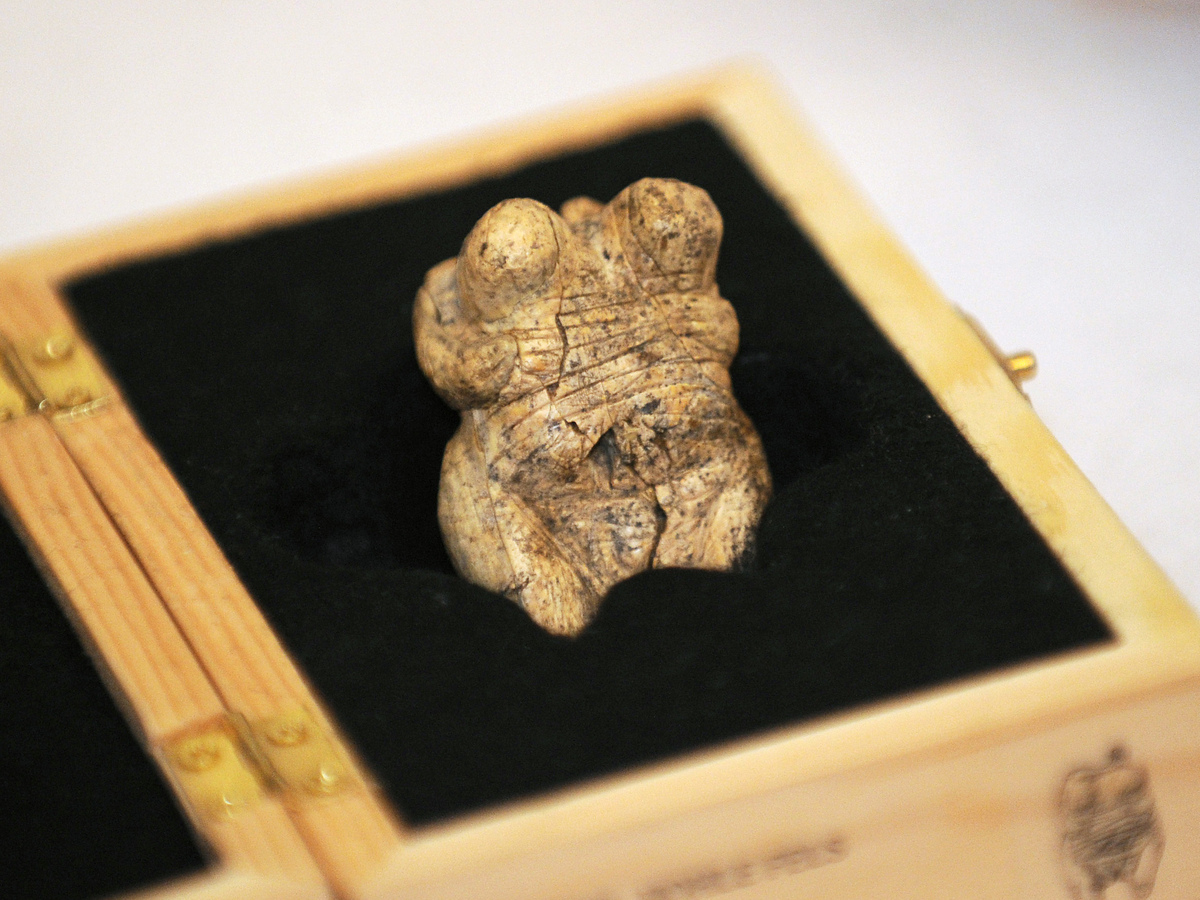 This carved ivory figurine of a woman, found in a cave in southern Germany in 2008, is estimated to be at least 35,000 years old.

In the realm of prehistoric art, there's a type of small figurine made of stone, bone or ivory that is famous. It features exaggeratedly large breasts, hips and buttocks.

Popularly called "Venus figures," these tiny statues were crafted by human ancestors living in locations across Europe and Asia starting around 35,000 years ago. Most often, the pieces have been interpreted by academics and journalists as fertility figures that could be used ritually, or as what essentially amounts to hand-held pornography, produced by men for other men — the logic here being that sexual images supposedly arouse males more than females.

In an article called "Science, the Media, and Interpretations of Upper Paleolithic Figurines" in the September issue of the journal American Anthropologist, anthropologists April Nowell and Melanie L. Chang of the University of Victoria in British Columbia, Canada, question these interpretations. Crediting scholars who also contested them in previous articles, Nowell and Chang offer numerous scholarly citations to prove that this sexualized vision of these figurines is still prevalent in academia. I noticed myself that when a new figurine dating to 35,000 years ago — "the Hohle Fels" figurine — was discovered in 2009, one archaeologist told The New York Times that the figure "could be seen as bordering on the pornographic" and went on to say in Science that our ancestors at this time "were sex-mad."

Science-oriented media, in fact, according to Nowell and Chang, do often echo the academic, sexualized discourse. Do these figurines represent early pornography? Science asked. Nature dragged out phrases like "prehistoric pinup" in referring to the object's "almost aggressively sexual nature." In Discovery magazine in 2011, the more general claim was made that the objectification of women can be traced "deep into the mists of prehistory."

Nowell and Chang report, though: that the figures of this time period are far too variable in form to be reduced female anatomy; that there's no evidence these small statues were made by men for men; and that, in any case, it's poor practice to assume that our ancestors would have responded to hyperfemale figurines in any certain way. "The assumption that Paleolithic people would have responded to images of female nudity in the same manner as modern people — or, rather, a sample of modern people drawn from a single Western culture group at a specific point in time — is untenable," they write. Response to art "is highly culturally mediated," they say, and thus likely to differ across time.

In an interview conducted earlier this week by email, I asked Nowell to explain her perspective further.

BJK: Does it surprise you that the view of these figurines as sexualized women/sex objects is so very persistent in both academia and the media, or do you think this is an unsurprising side effect of a patriarchal society?

AN: I guess the answer is both yes and no. Yes, it surprises because as an archaeologist when I look at the tremendous diversity represented by these figurines I can't believe we reduce them to a pair of breasts. Because most people, including archaeologists outside my field, normally see images of the same 3 or 4 figurines repeatedly, they are unaware of this variation in style, material and context.

Some figurines are male, some are female; some are human, some are animals and some are fantastical creatures (i.e., they exist only in our imagination); some wear items of clothing, others do not; some are found in ritualized contexts while others are found in refuse heaps; some have perforations suggesting they were made to be worn while at least one figurine has a hollowed out back suggesting that it was perhaps mounted on a pole. So to interpret all of these figurines as sexual objects and in particular to use the term "pornographic" as some of the academic and non-academic writers do when that is such a culturally specific term and we are talking about a period of 25,000-35,000 years ago is not only surprising, it is disheartening.

At the same time, I am not surprised because people are fascinated by prehistory and the media obviously want to capitalize on that interest by writing stories in such a way that they attract maximum readership and to use a cliché "sex sells."

BJK: You cite but don't much discuss the work by Olga Soffer; to what degree does her work interpreting the clothing depicting on the figurines as indicative of women's labor, power and prestige help along what you are trying to do, shift the conversation about these figurines?

AN: Olga Soffer's research with her colleagues James Adovasio and David Hyland has been instrumental in providing a more holistic understanding of the past by, as we say in archaeology, making the invisible visible. Their work has shed light on the existence of a complex textile technology thousands of years before we thought possible. By extension, their research on textiles, in conjunction with research on ceramic technology (also Olga's work!), and on the production of beads, flutes, sculptures and cave paintings all of which date back 25,000 to 35,0000 or even 40,000 years ago illuminate the lives of all Ice Age peoples.

I always tell my students that life in Ice Age Europe would have been demanding and you couldn't have afforded to have 50% of the population not contributing to the economic, political and social well-being of their communities. This isn't a politically correct revisionist view of prehistory but rather an attempt to be more scientific.

BJK: Why do you think it's significant that we (society beyond academia) think hard about what these figures depict- and don't depict?

AN: It is important because when highly respected journals such as Nature use terms such as "Prehistoric Pin-up" and "35,000 year old sex object" and archaeologists from prestigious universities describe the figurine as "sexually exaggerated to the point of being pornographic" their voices carry weight and authority. This allows journalists and other researchers — particularly evolutionary psychologists — to use this interpretation of archaeological evidence to legitimize and naturalize contemporary western values and behaviors by tracing them back into the "mists of prehistory."

In other words, we look at the way gender and gender relations are constructed today in our own (Western) society and we believe that good, bad or otherwise this is the way they have always been and will always be — that this particular way of organizing ourselves makes "evolutionary sense" and here is the scientific evidence to prove that — instead of allowing ourselves to imagine and to investigate whether there have been other ways of organizing ourselves as people and to recognize that the present is very much the result of particular historical and social circumstances.

It's fascinating to know that our ancestors were making not only the beautiful (and better-known to us) animal images of cave art at this point in time, but also the highly varied types of figurines described by Nowell and Chang. Obviously, I have no way to know whether those Paleolithic people were "sex-mad." I do think that distancing ourselves from a simple sexual perspective mapped onto the lives of those ancestors will allow us to study our past with fresh eyes.