Accessibility links
Pondering 'Deep Time' Could Inspire New Ways To View Climate Change : 13.7: Cosmos And Culture Comparing and contrasting different times and places as analogues for one another could help us re-adjust our orientations toward time and our environment, suggests anthropologist Vincent F. Ialenti. 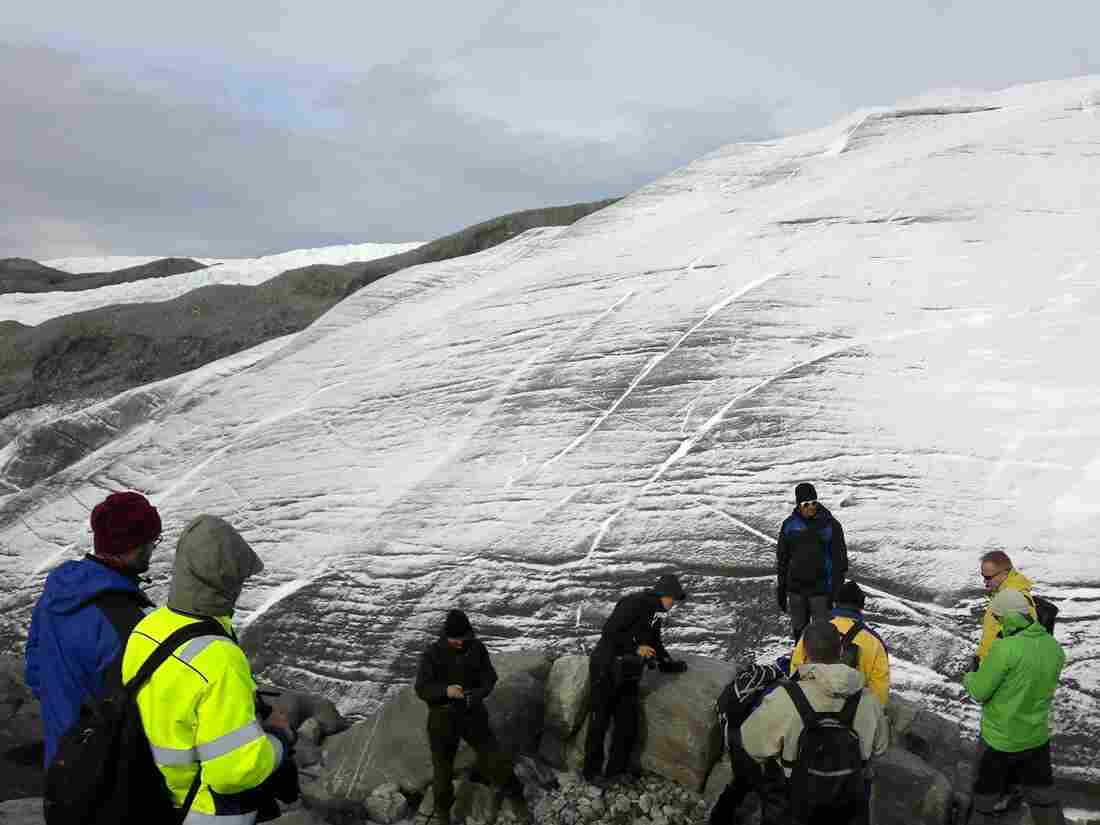 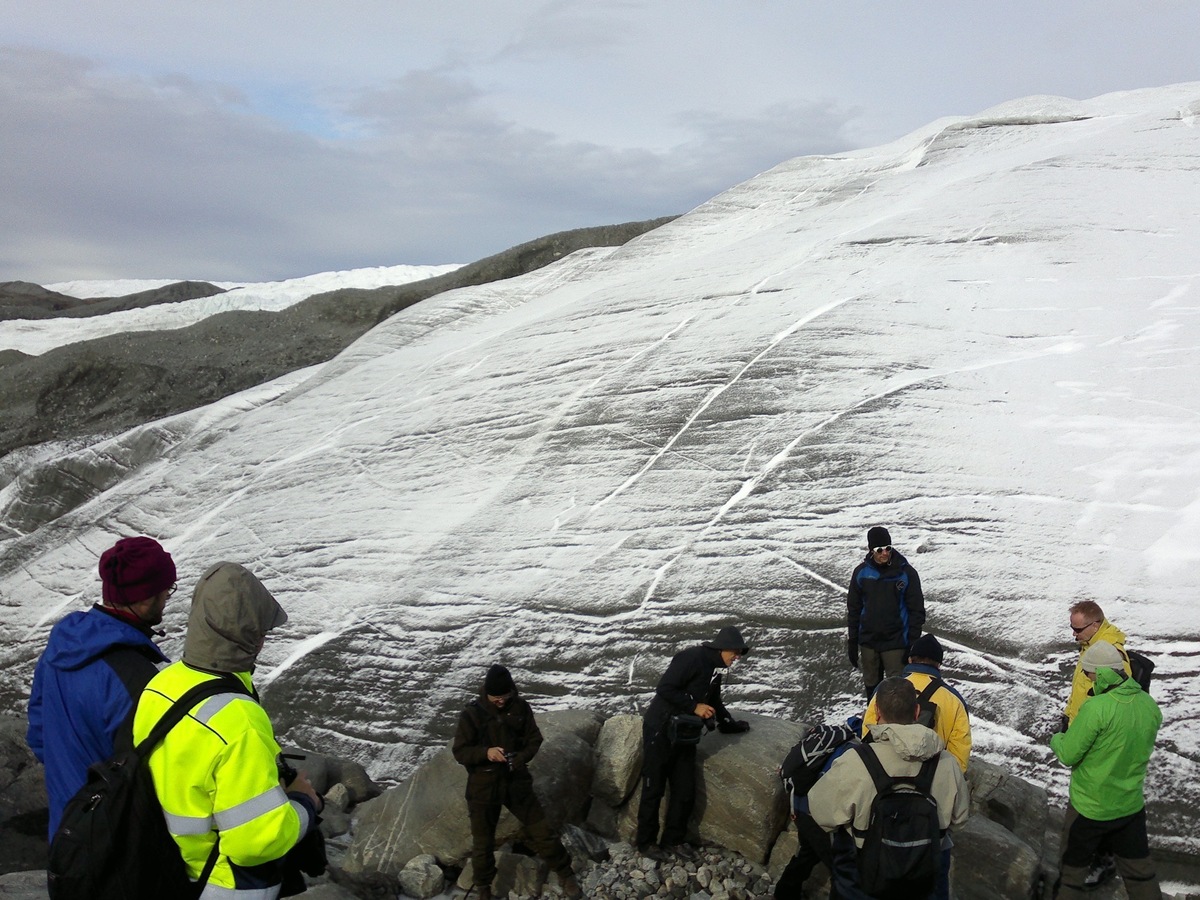 Scientists who work for nuclear waste disposal projects in Finland, Canada and Sweden study an ice sheet in western Greenland.

Last Sunday, I reflected here in 13.7 on my anthropological fieldwork among Biosphere Assessment (BSA) experts involved with Safety Case projects supporting what might, in the early 2020s, become the world's first operational geological repository for high-level nuclear waste.

An ambition of these BSA experts was to foresee changes that might occur over the next 10,000 or so years in ecosystems in Olkiluoto, Finland — the spot where Finland's nuclear energy companies spent nuclear fuel is to be permanently buried. Their work helped nuclear waste management company Posiva Oy better understand the potential radiological risks to humans and other organisms if radionuclides escape from the repository due to far future leakages and then, in a worst-case scenario, disperse on or near Earth's surface.

My ongoing discussions with Safety Case experts got me wondering: Could insights garnered from these experts' day-to-day dealings with distant future worlds aid us in re-thinking humanity's place within the deeper history of our environment? Could they inspire positive changes in our ways of living on a damaged planet during what is increasingly called the Anthropocene?

This week, I delve into these questions once more. My focus now, however, is on a different breed of expert working on the Safety Case project: the natural analogue expert.

The natural analogue experts I came to know, unlike BSA experts, conducted research at natural formations often hundreds or even thousands of miles away from Olkiluoto. The formations studied were selected because they were seen as harboring characteristics similar to those to be found in Olkiluoto now or in the distant future.

Some of these experts embarked upon research expeditions to a massive ice sheet east of Kangerlussuaq, Greenland. The aim of this Greenland Analogue Project was to see whether scientific scrutiny of the ice sheet — as well as the permafrost and groundwater surrounding it — could help nuclear waste repository projects in Finland, Sweden and Canada more accurately project the characteristics of distant future ice sheets and their implications for repository safety. It is, after all, anticipated that ice sheets will weigh on Olkiluoto during the next ice age, to begin 50,000 or 60,000 years from now.

Experts involved with the Palmottu Natural Analogue Project embarked upon research expeditions to a uranium deposit in Southern Finland. Their aim was to study how groundwater had flowed, how radionuclides had moved around and how various chemical reactions had occurred there throughout past millennia. Knowledge of this uranium deposit's distant past, it was thought, could shed light on how Finland's spent nuclear fuel might behave in the distant future.

But reasoning by analogy is really nothing new for scientists. And indeed analogue studies of a very similar kind are also ventured elsewhere. Space analogue studies, for instance, have examined regions of Earth thought to harbor environmental conditions resembling those of celestial bodies (like Mars) to aid future space exploration missions. And, as MIT anthropologist Stefan Helmreich discussed in his 2012 article on "extraterrestrial relativism," scientists "looking for life on Mars scout for microbes analogous to those archaebacteria in Earth that live in such sites as deep-sea hydrothermal vents."

Yet, what piques my curiosity, as an anthropologist, is whether by taking cues from natural analogue experts we can learn to better commune with deep timescales in our everyday lives. If so, we could better attune to the radical long-term of what Stewart Brand might call the "long now." We could "burst the limits of time" in our personal experiences of the world around us.

In this spirit, perhaps we could routinely exercise our own imaginative horizons in a way inspired by natural analogue experts' ambitious intellectual journeys across time and space. For example, someone from Atlanta could — while, say, on vacation in some snowy region of Canada — reflect imaginatively on ways Canada's present-day environment might or might not resemble Georgia's far-future environment during the next ice age. I suggest that imaginative exercises of this sort — comparing and contrasting different times and places as "analogues" for one another — could help us re-adjust our orientations toward time and toward our environment.

Here's how. Tuning into present-day societies' positions amidst the waxing and waning of ice ages compels us to imagine timespans that make even the multi-millennial timespans encountered in most discussions of climate change appear short-lived. Pondering the sublime breadth of this deep time, therefore, could spark within us a certain sense of awe – for some, an "atheist awe" – that could inspire new kinds of reflection on our place in Earth's history and our collective effects on its climate alike. Perusing the archives of long-sighted research emerging from nuclear waste repository projects, I suggest, can provide us with resources for cultivating such deep time thinking within us. We can start delving into the details here on Posiva Oy's public Databank.

Exercising our deep time imaginations in this way could even help us ponder how, to use anthropologist Ghassan Hage's words, "regardless of what and who we are, we, as individuals and as a society, can dwell in the world in a completely different way from the way we dwell in it at any given moment."

Vincent F. Ialenti is a U.S. National Science Foundation Graduate Research Fellow and a PhD Candidate in Cornell University's Department of Anthropology. He holds an MSc in "Law, Anthropology & Society" from the London School of Economics.